Several interesting birds have been seen around Pueblo in the past week, so I made a quick dash down and back before the day got too hot. Here’s some of what I spotted. 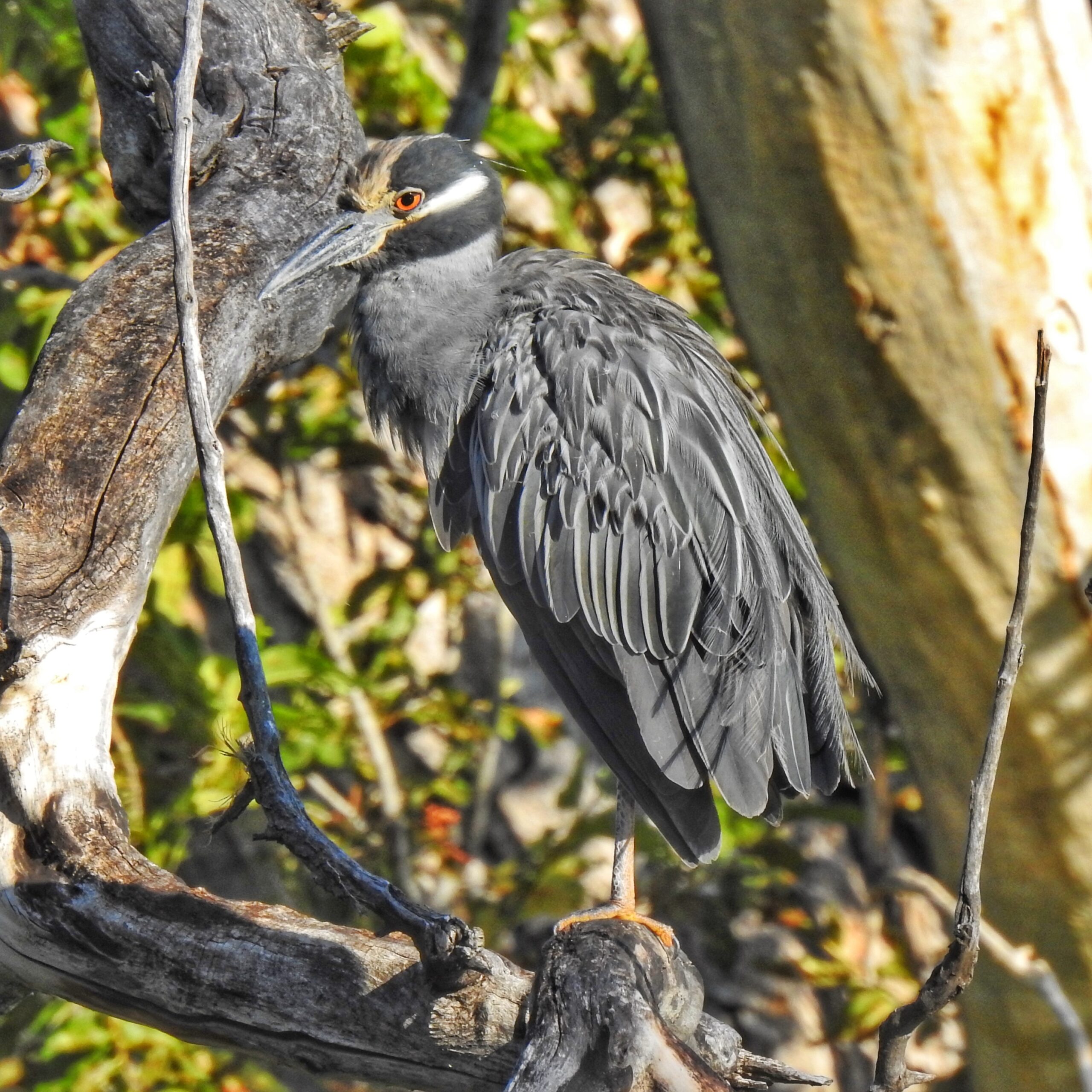 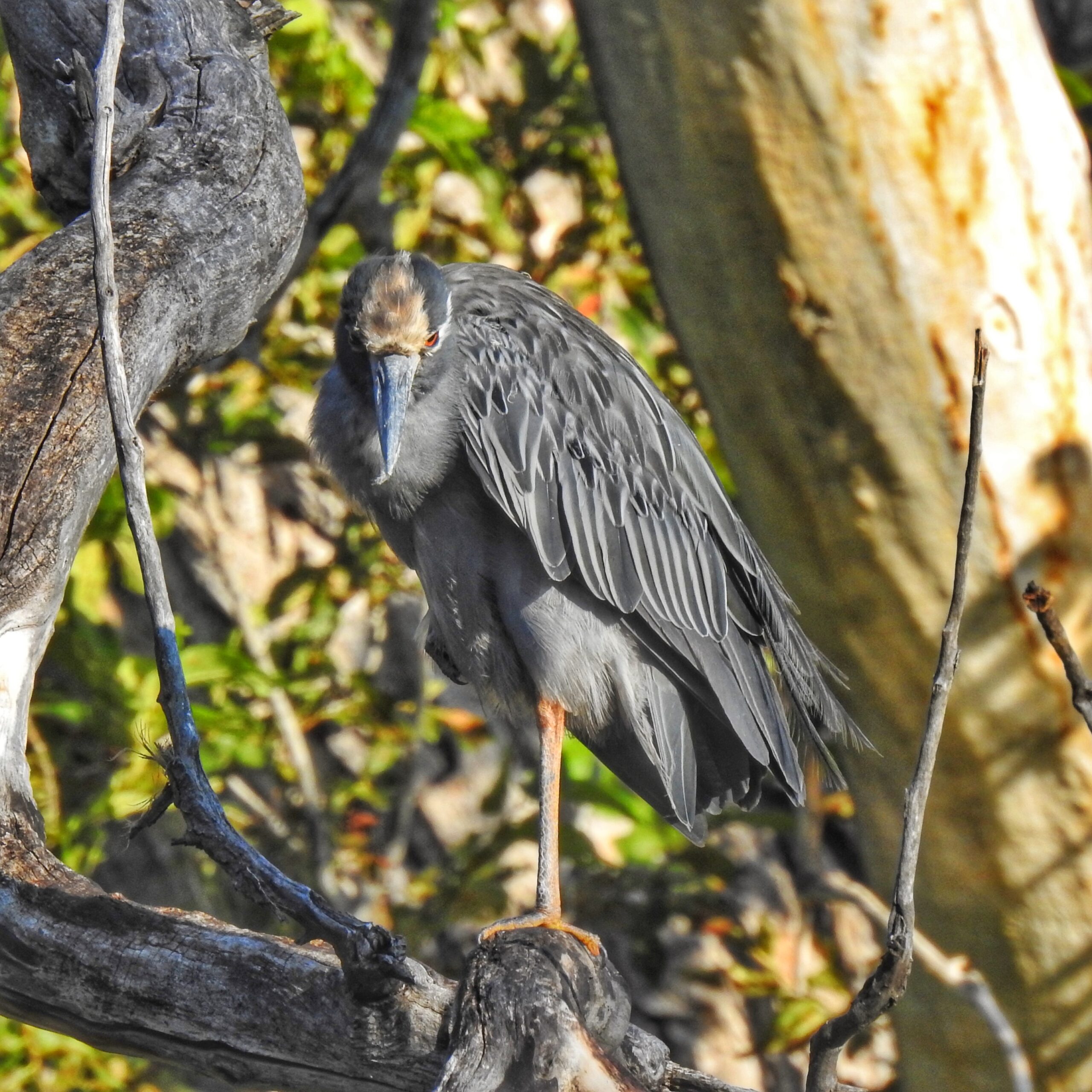 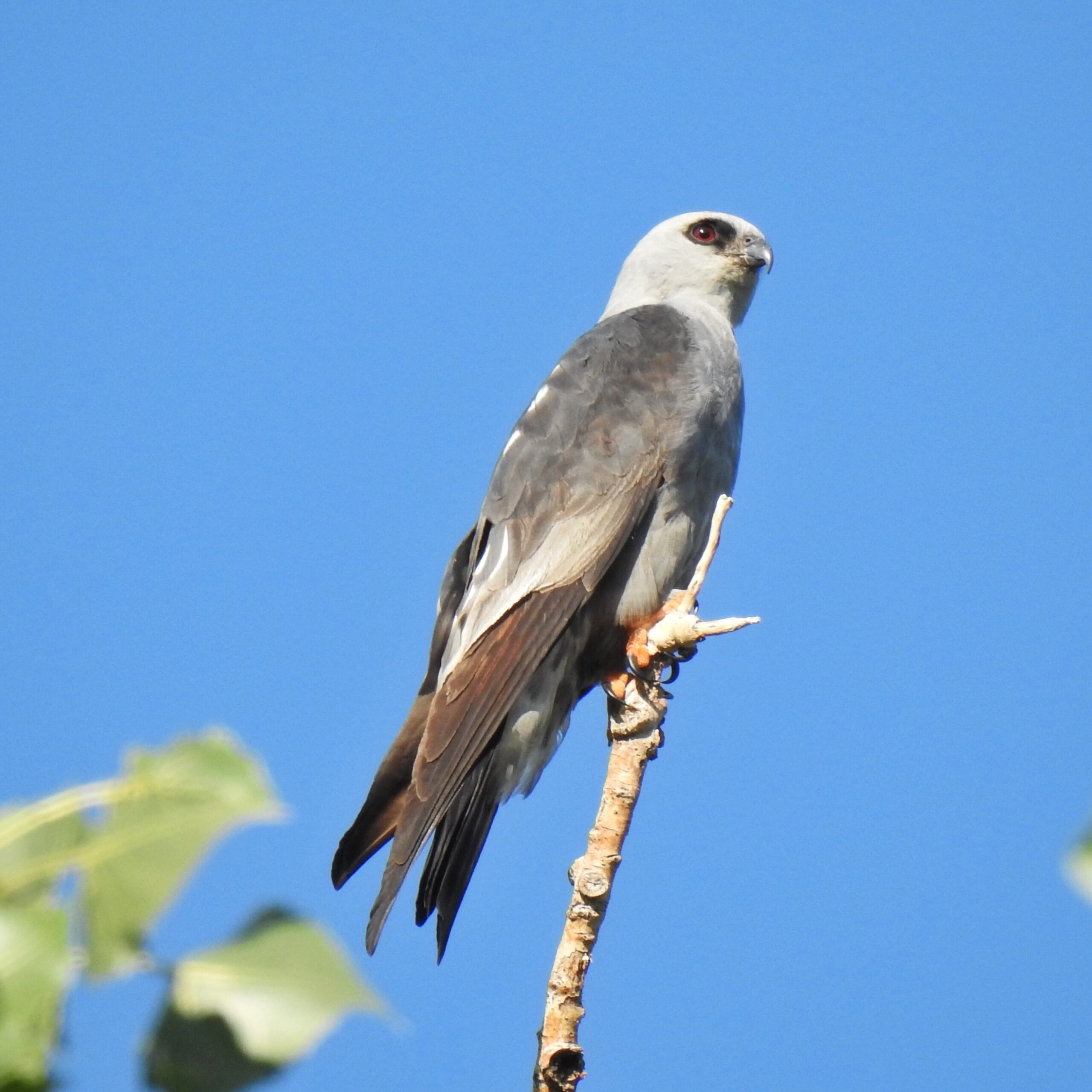 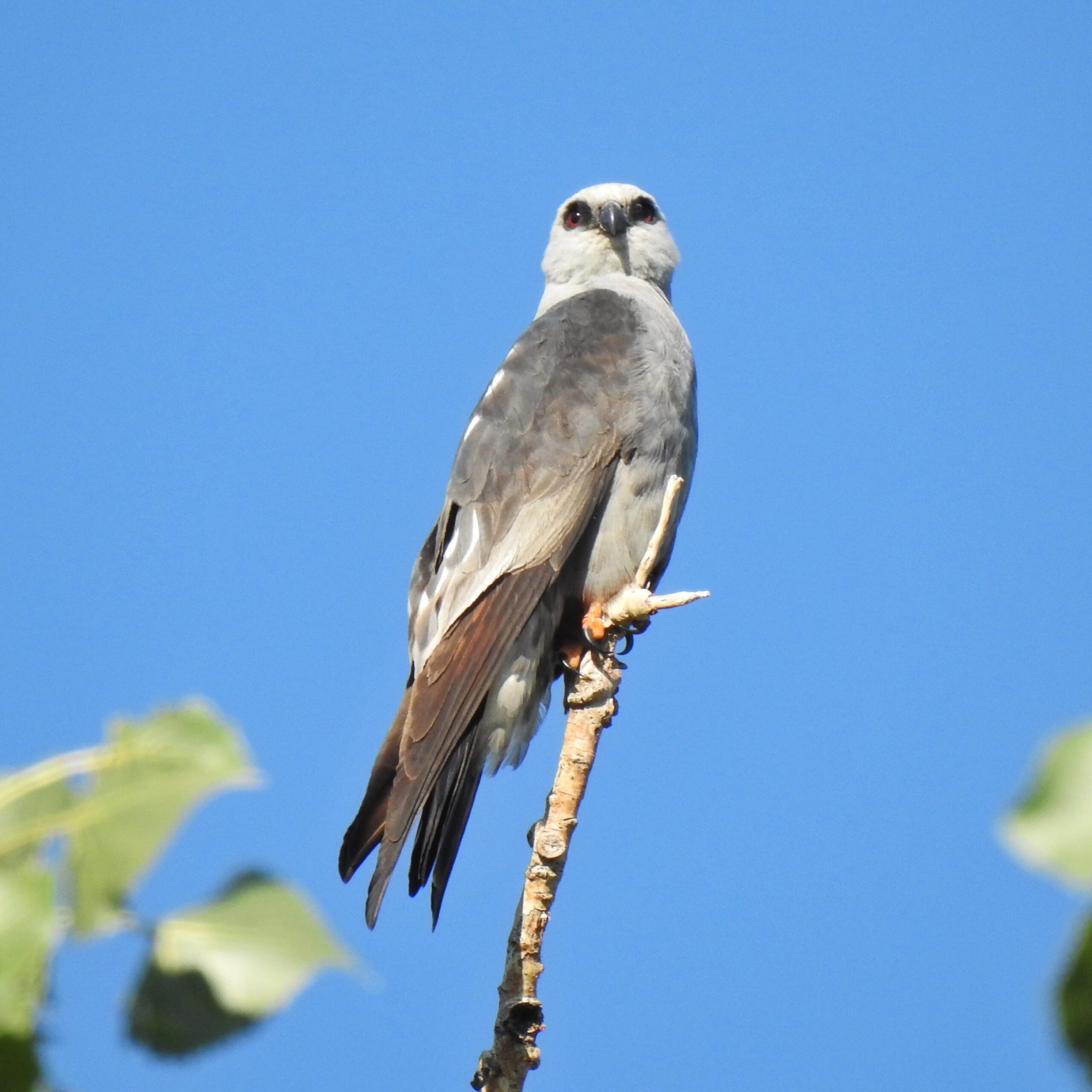 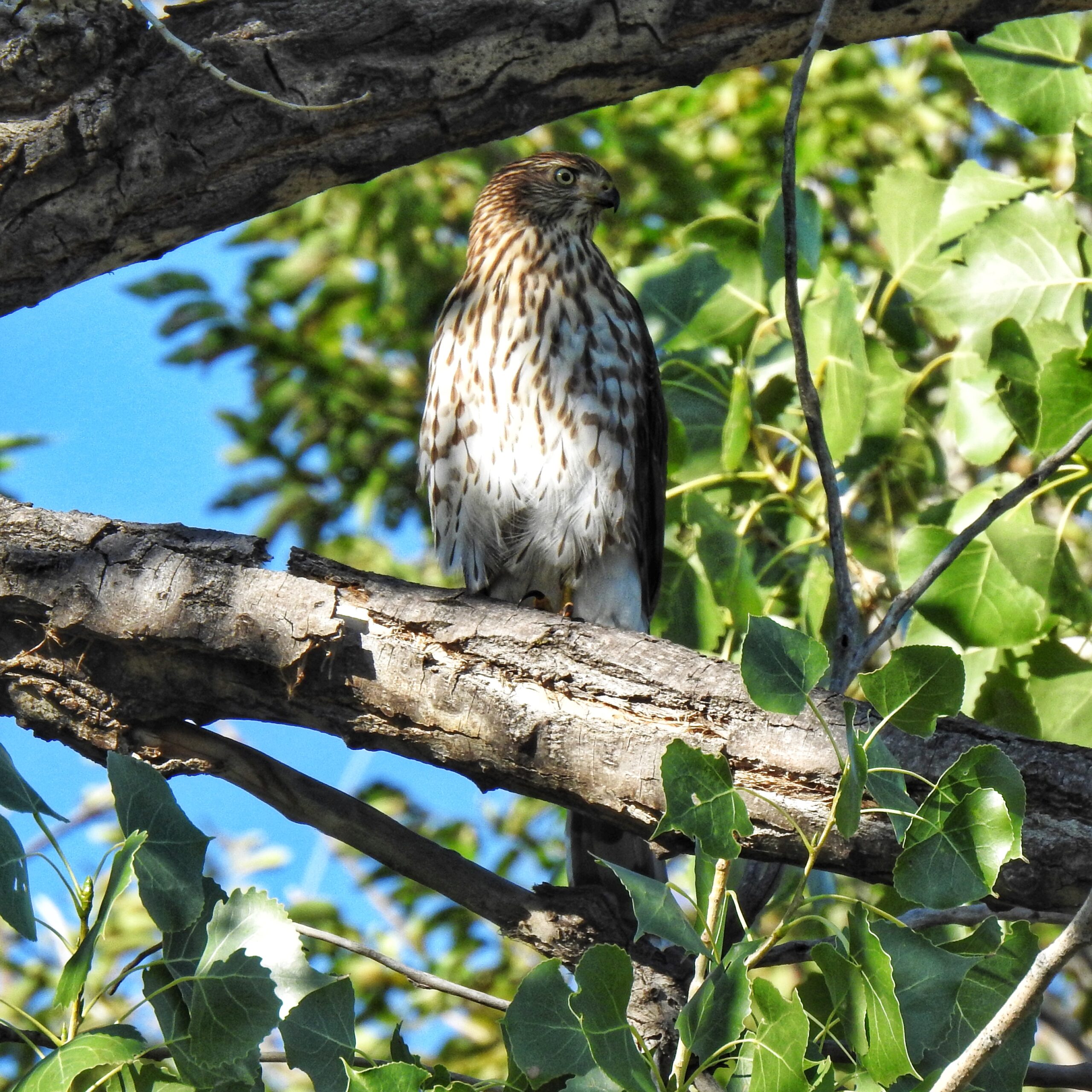 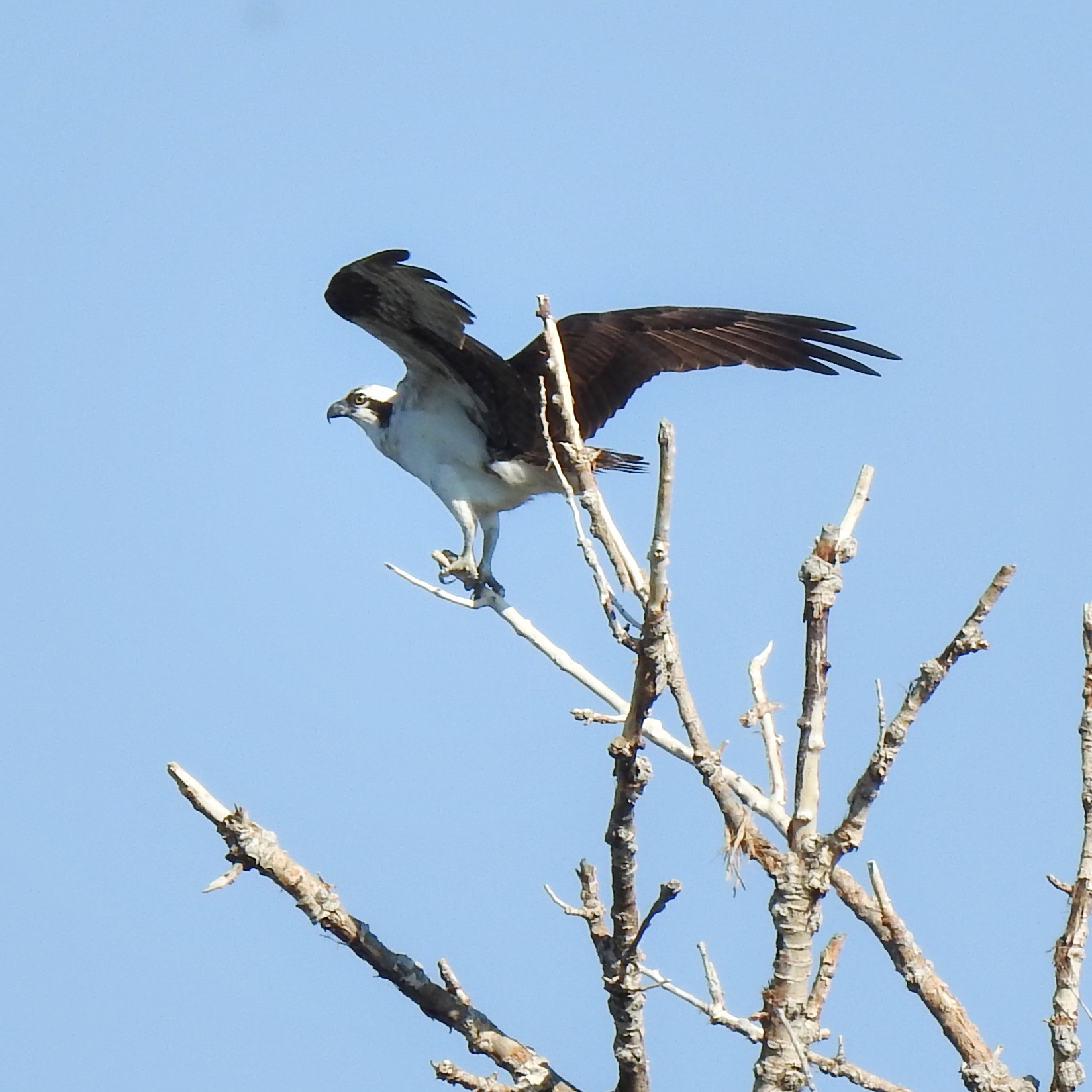 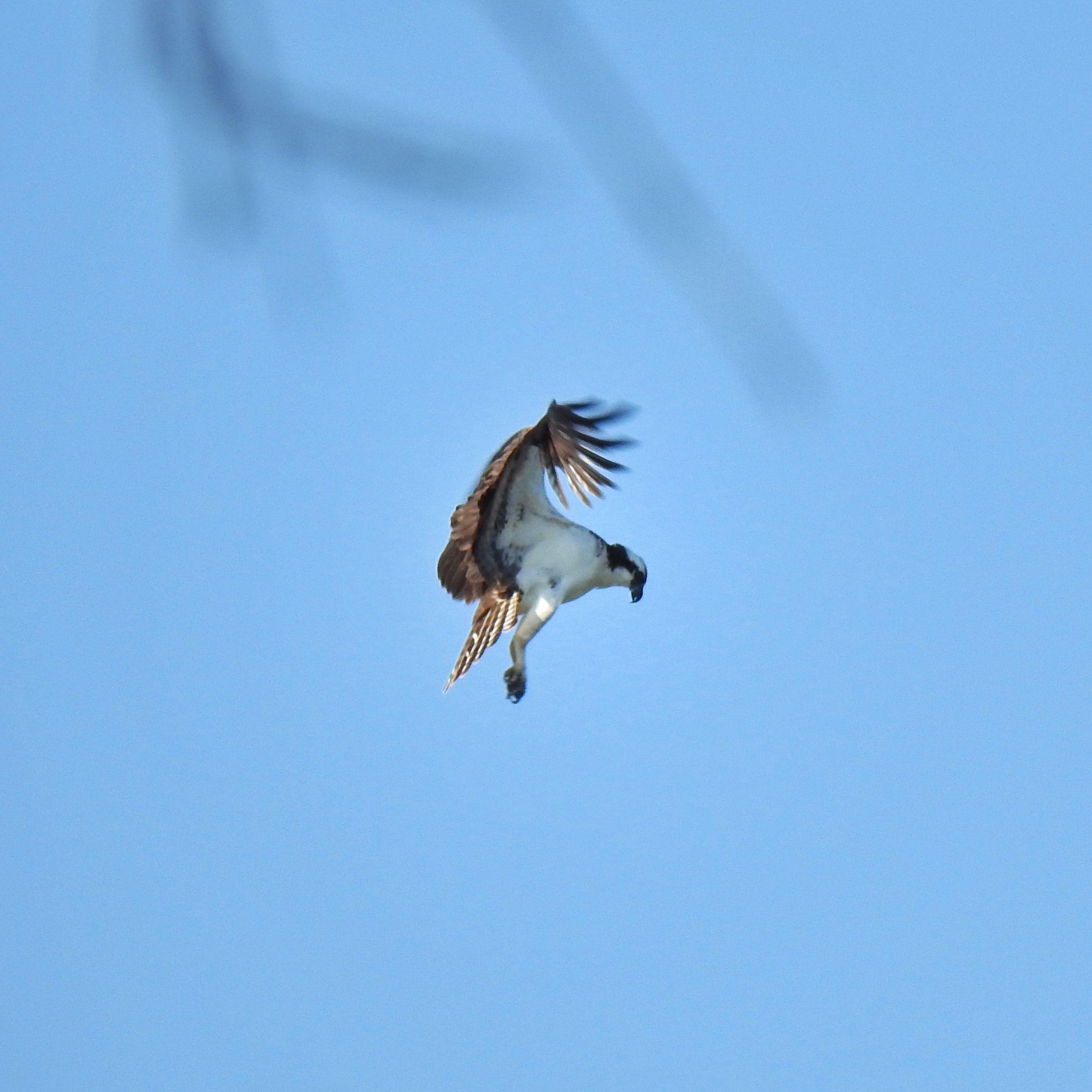 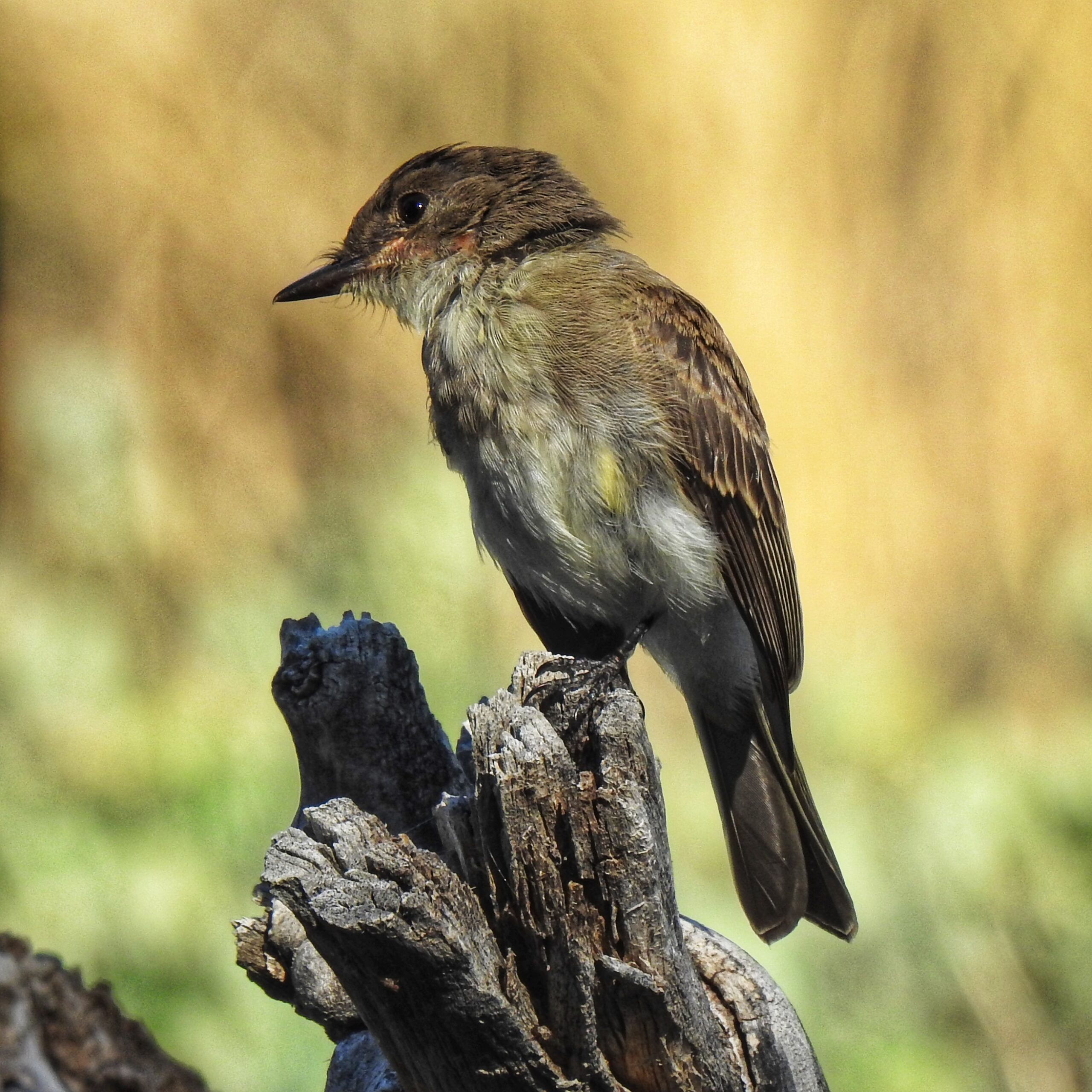 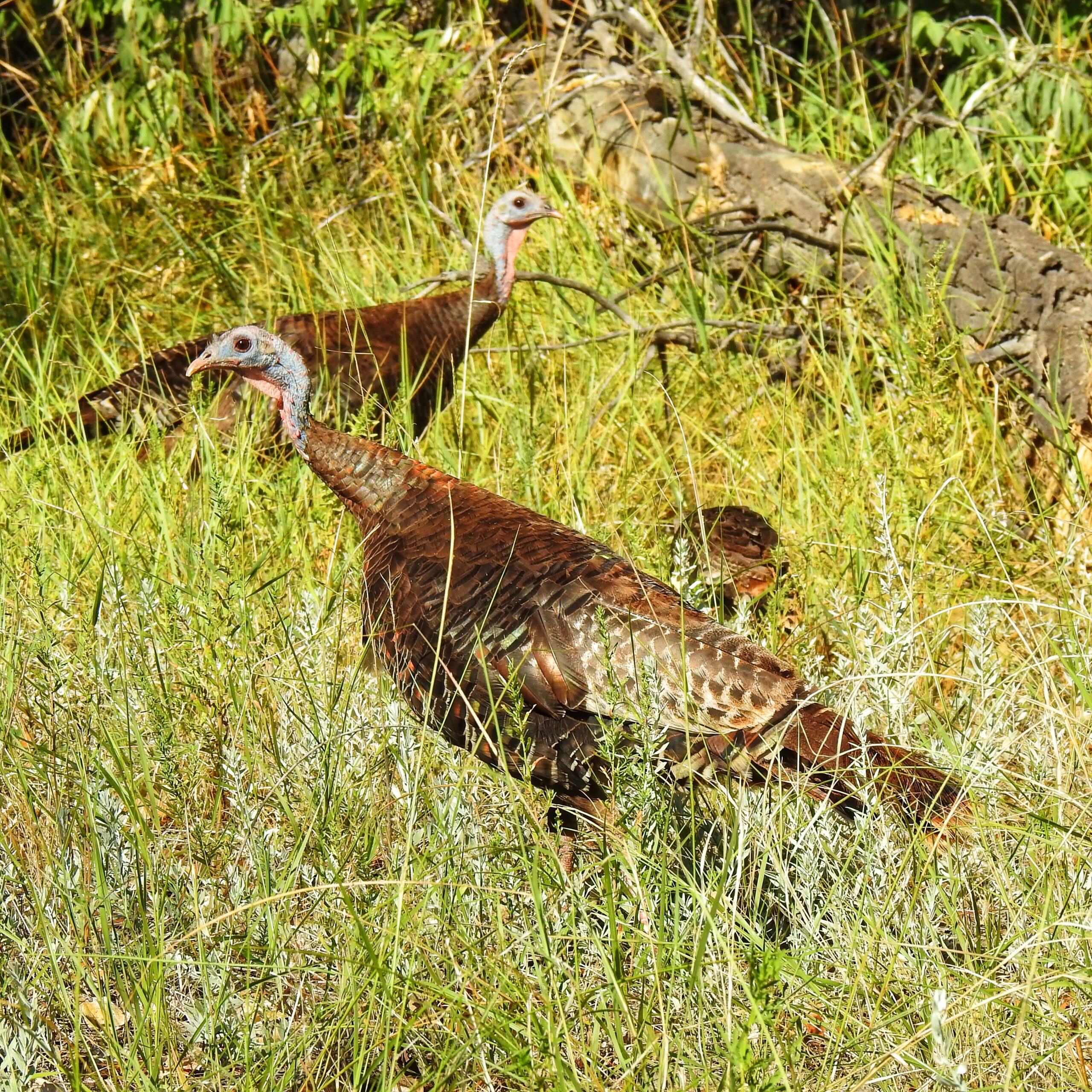 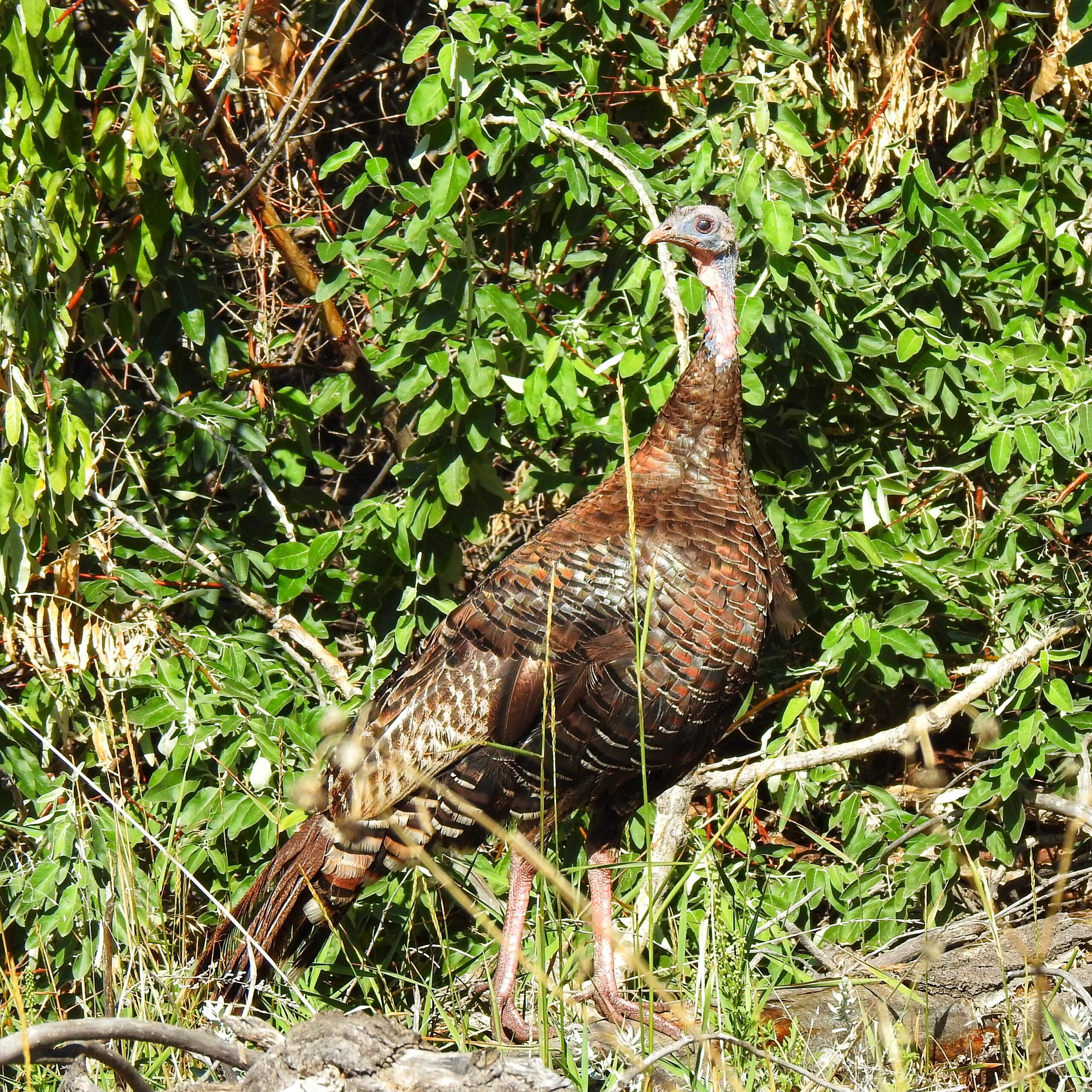 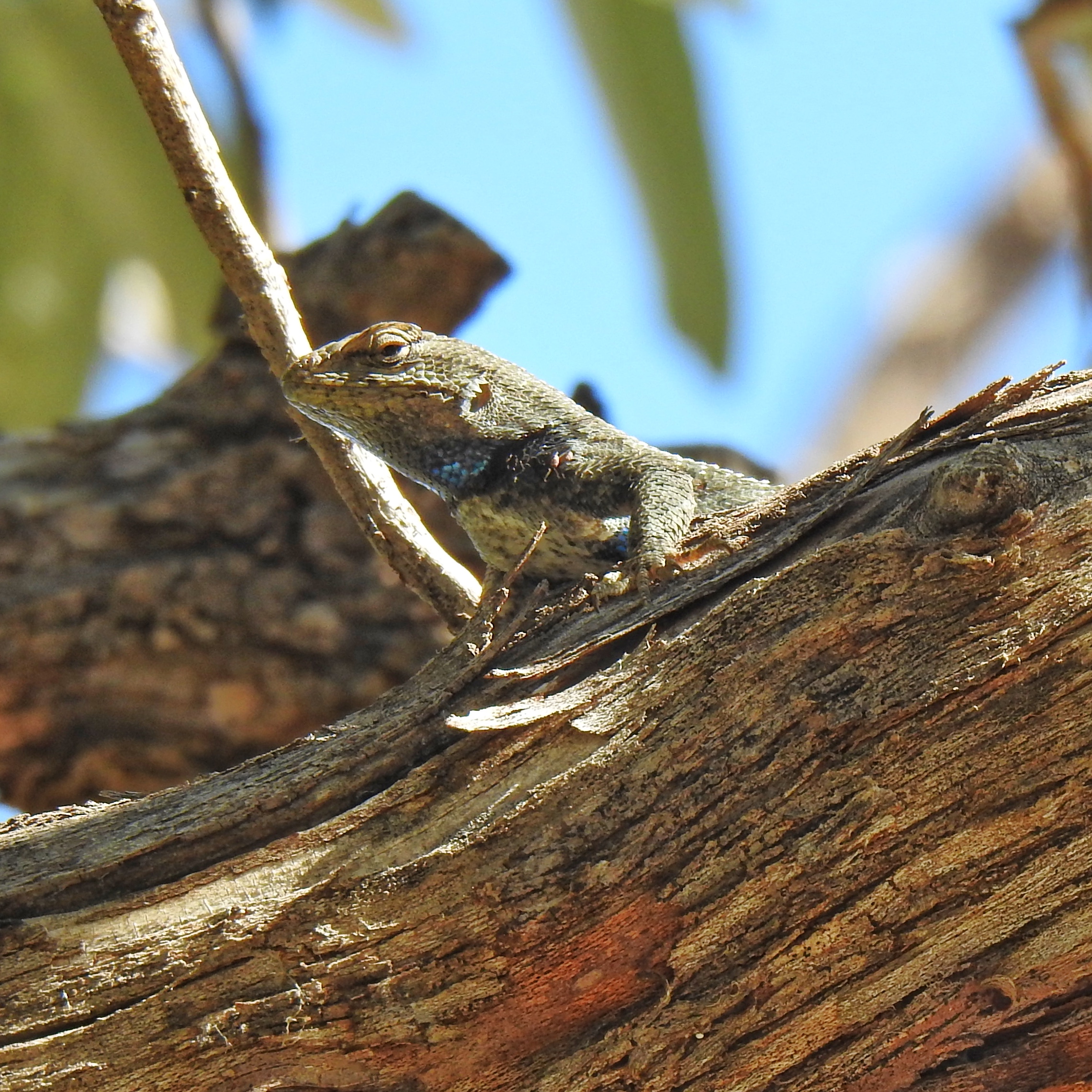 Things I Saw and Did in July

Such as they were.

Posted in Highlights of the Month | Leave a comment

We unintentionally rendezvoused with a whole bunch of other people at St. Elmo, the ghost down at the foot of Mount Princeton. It was too crowded to really enjoy. We watched the Broad-tailed and Rufous Hummingbirds that were all over the place for about half an hour, then we left. 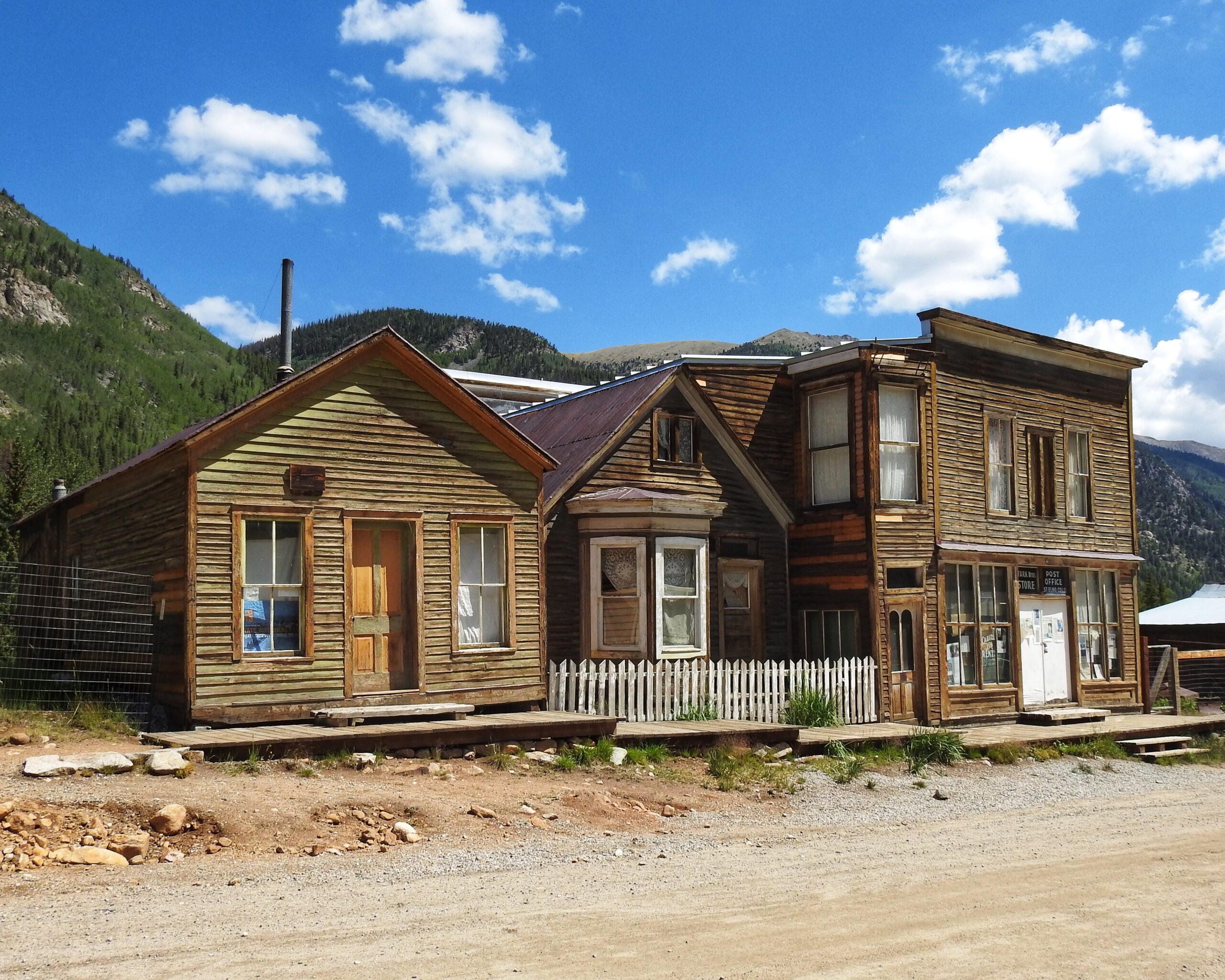 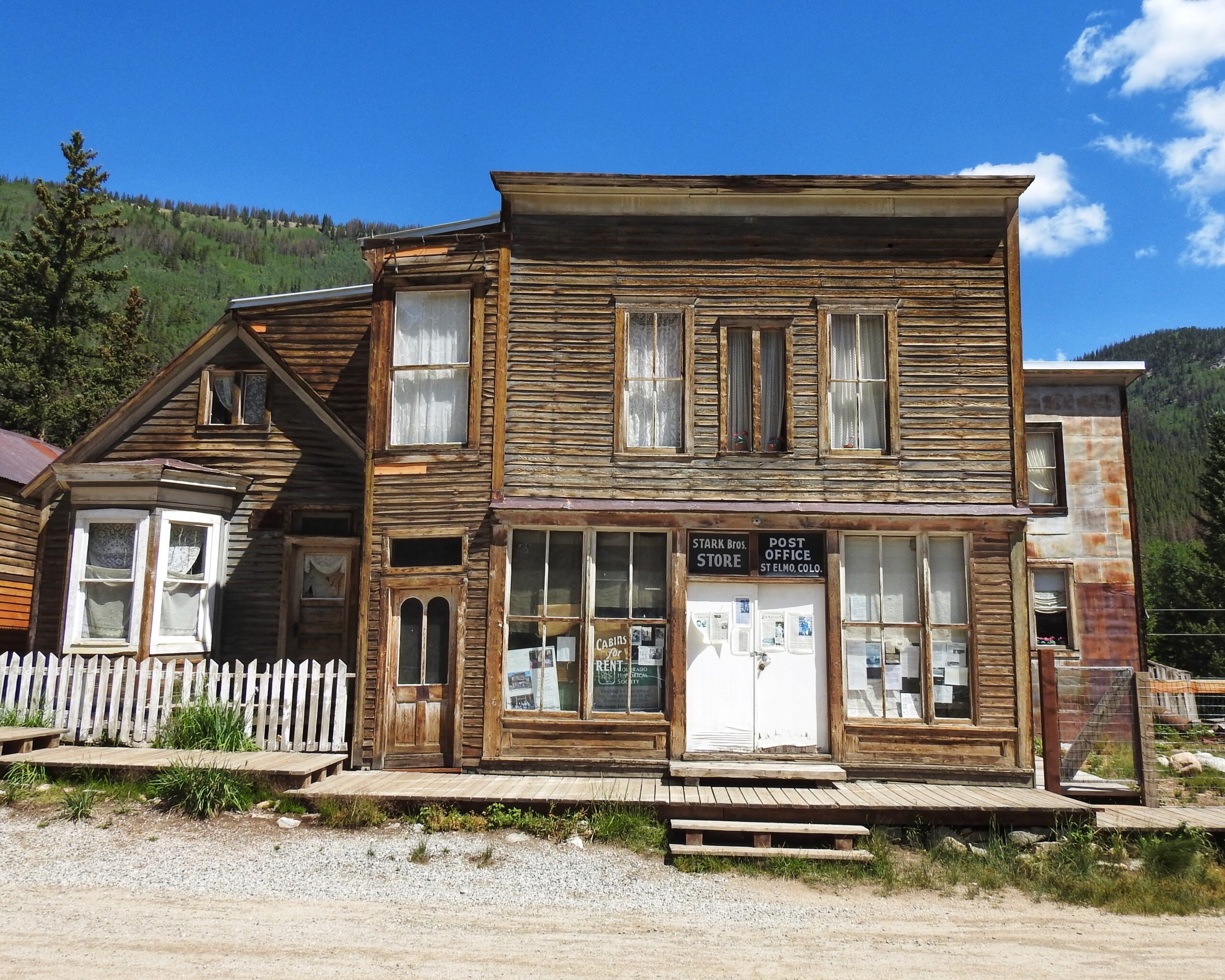 Rufous Hummingbird. They were coming to the feeders on a porch, out of the direct light, so it was tough to catch the fire-orange on the throat. I managed to catch it a bit on the second shot. 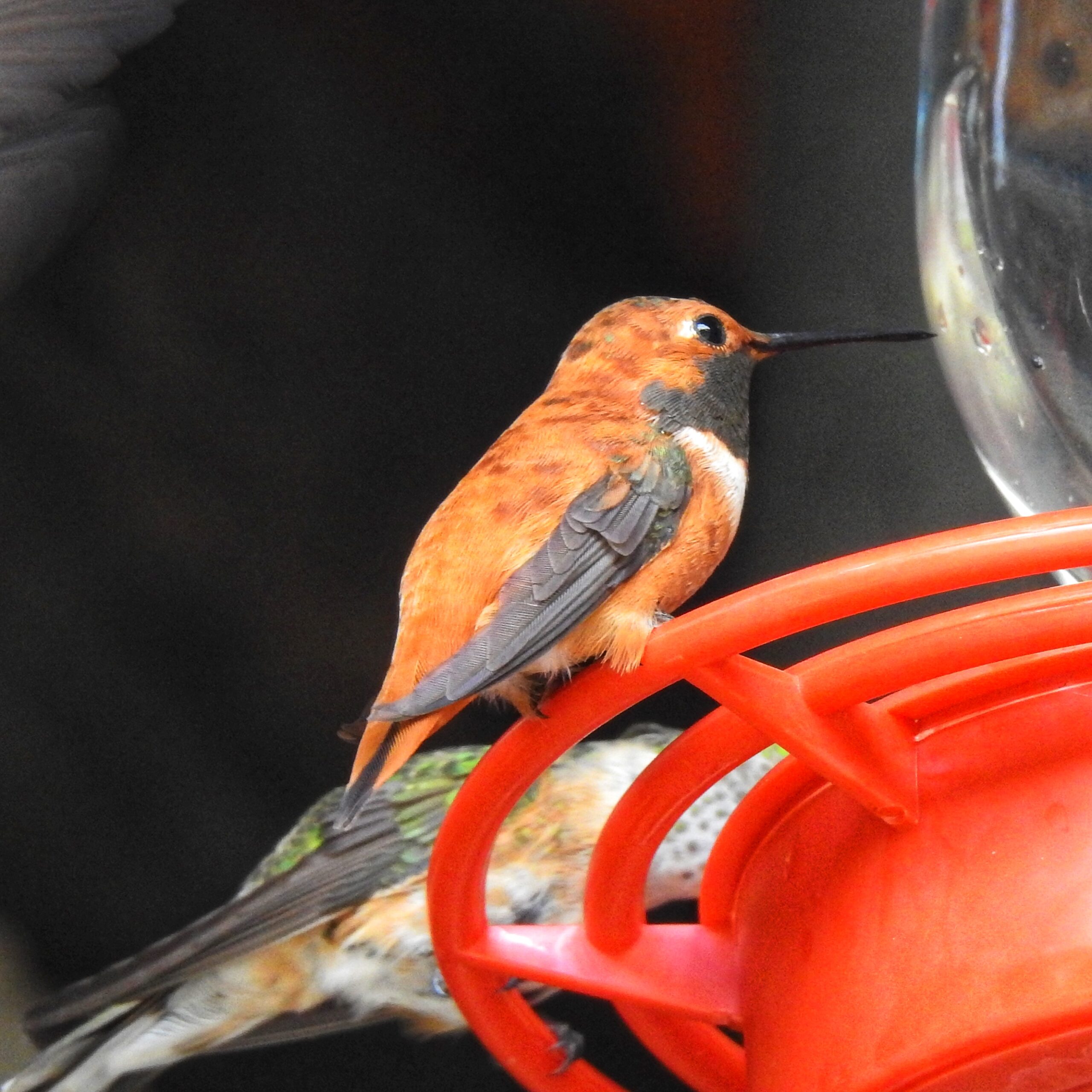 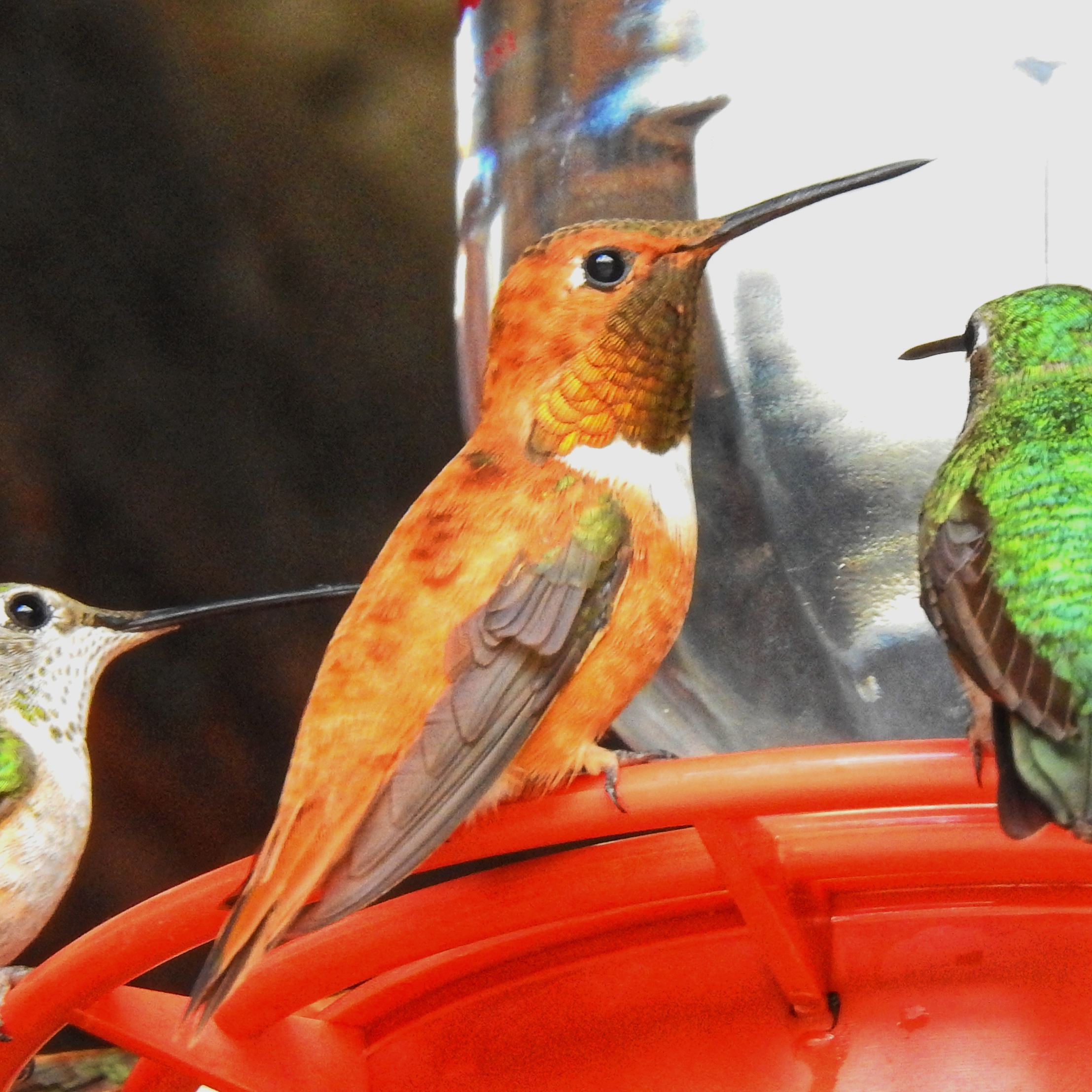 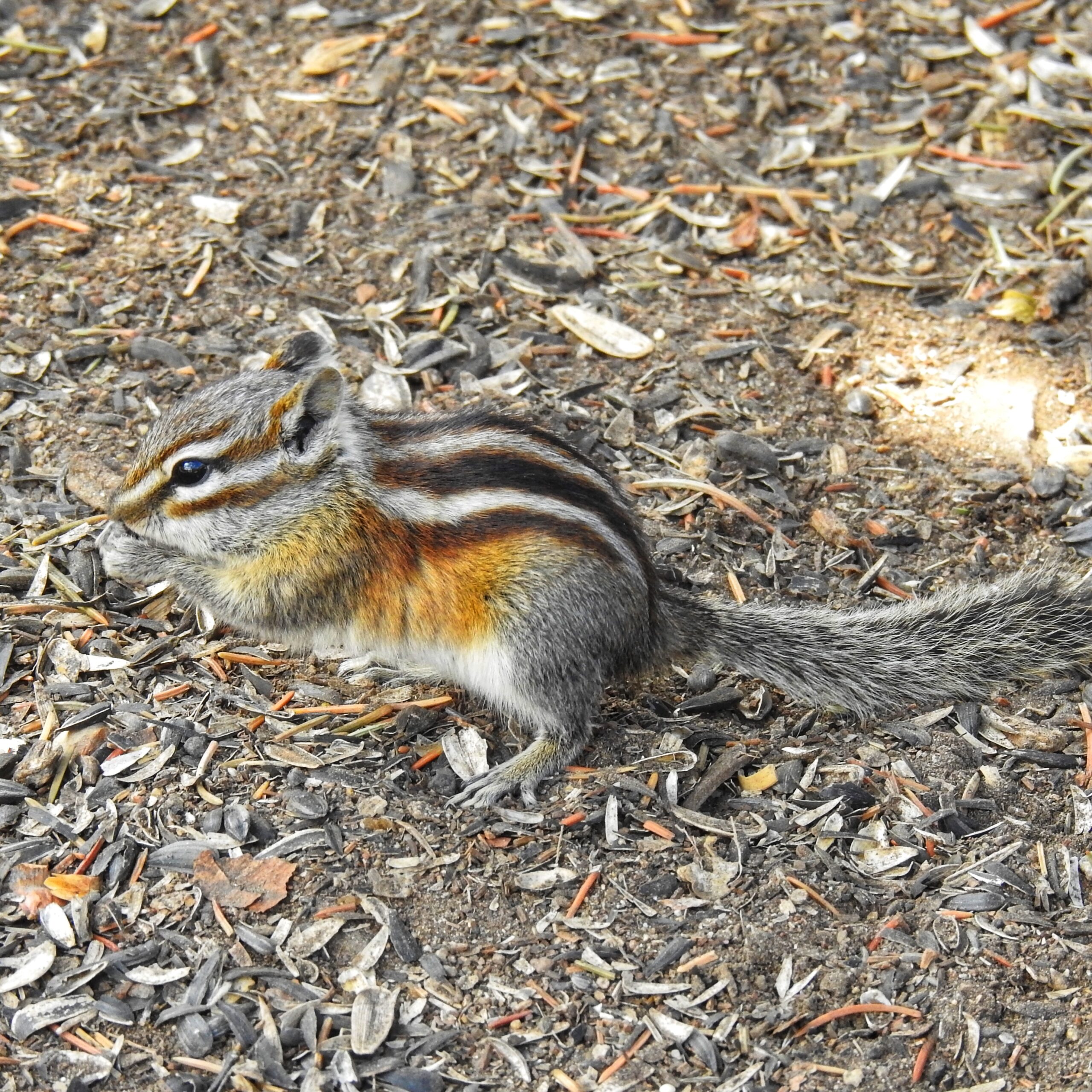 Based on lists by other birders, this is the go-to place for high-mountain species in El Paso County. I went early on a Friday that was forecasted to get up to 90°.

The Rainbow Gulch Trail is about a mile-and-a-half-long dirt road that slowly descends from Rampart Range Road to Rampart Reservoir. For half the distance, the road parallels a man-made, boulder-lined “creek” that pours out of a cement hole.

I continued on the trail around the north side of the reservoir for perhaps another two miles. But I could tell a complete circumperambulation would be long (turns out to be close to 12 miles around) and it was already getting very hot, so I turned around. 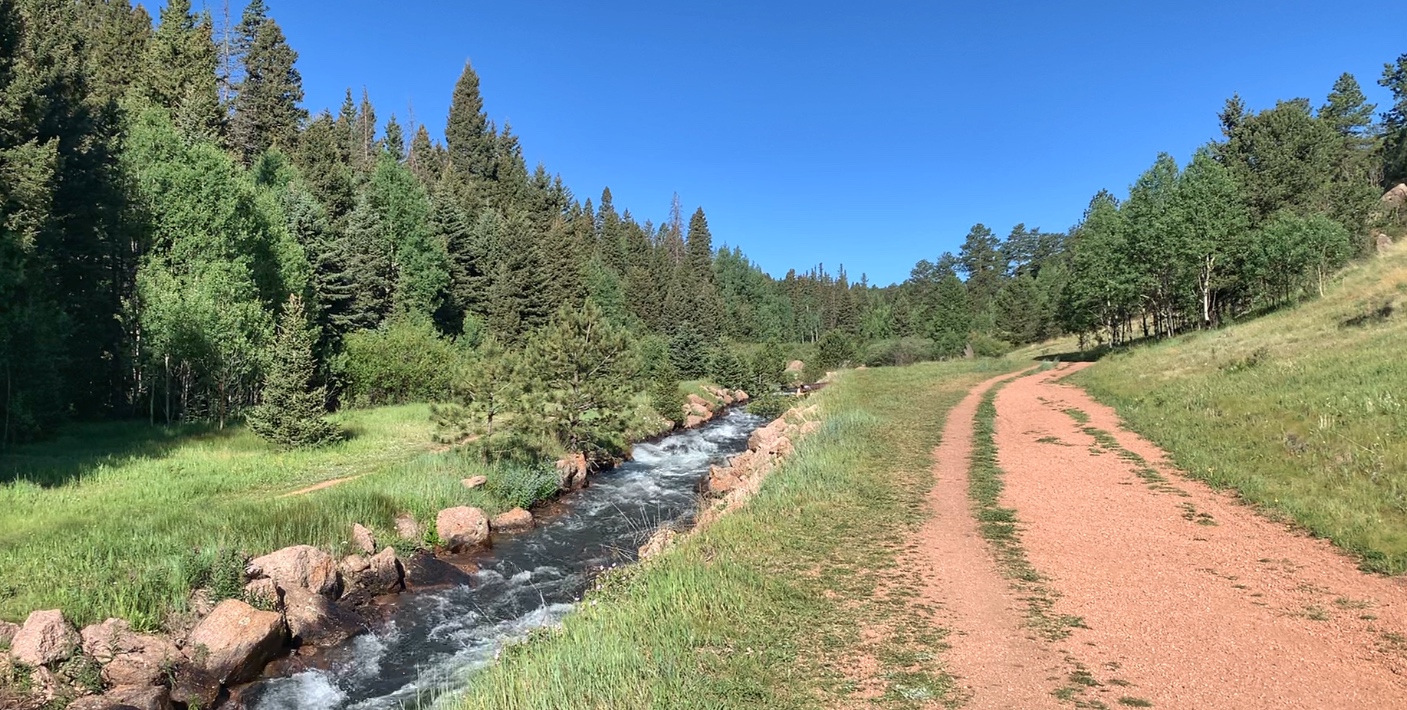 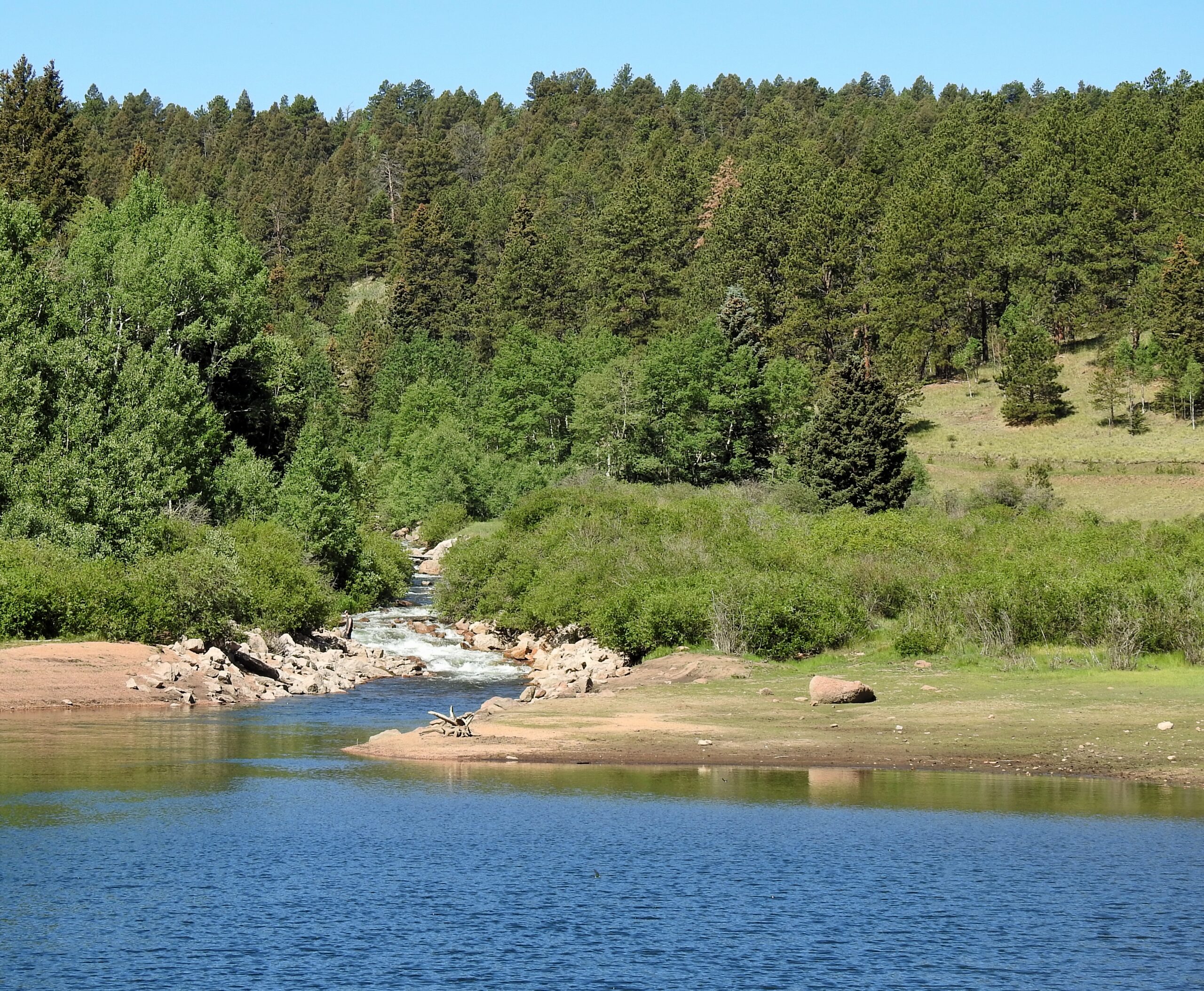 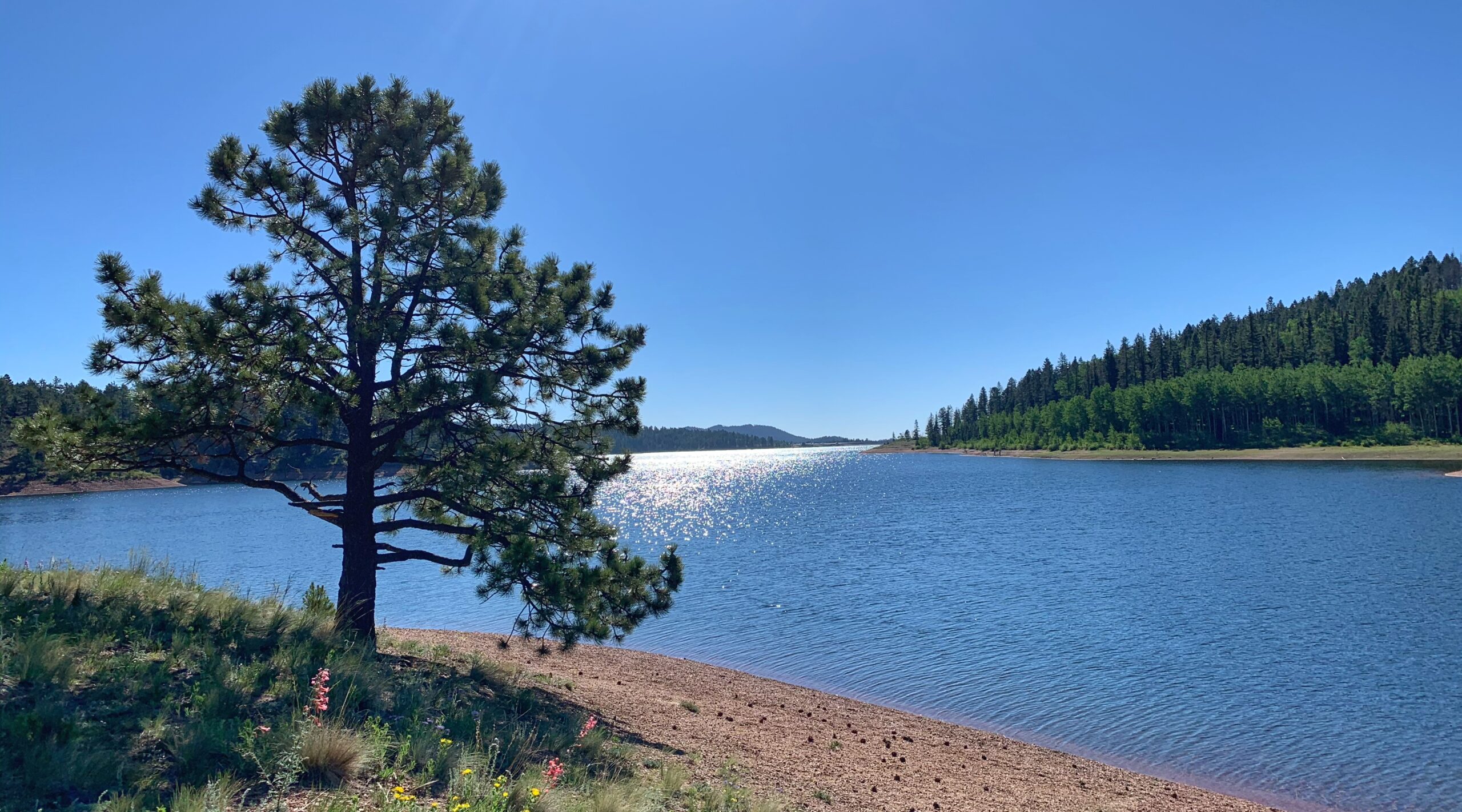 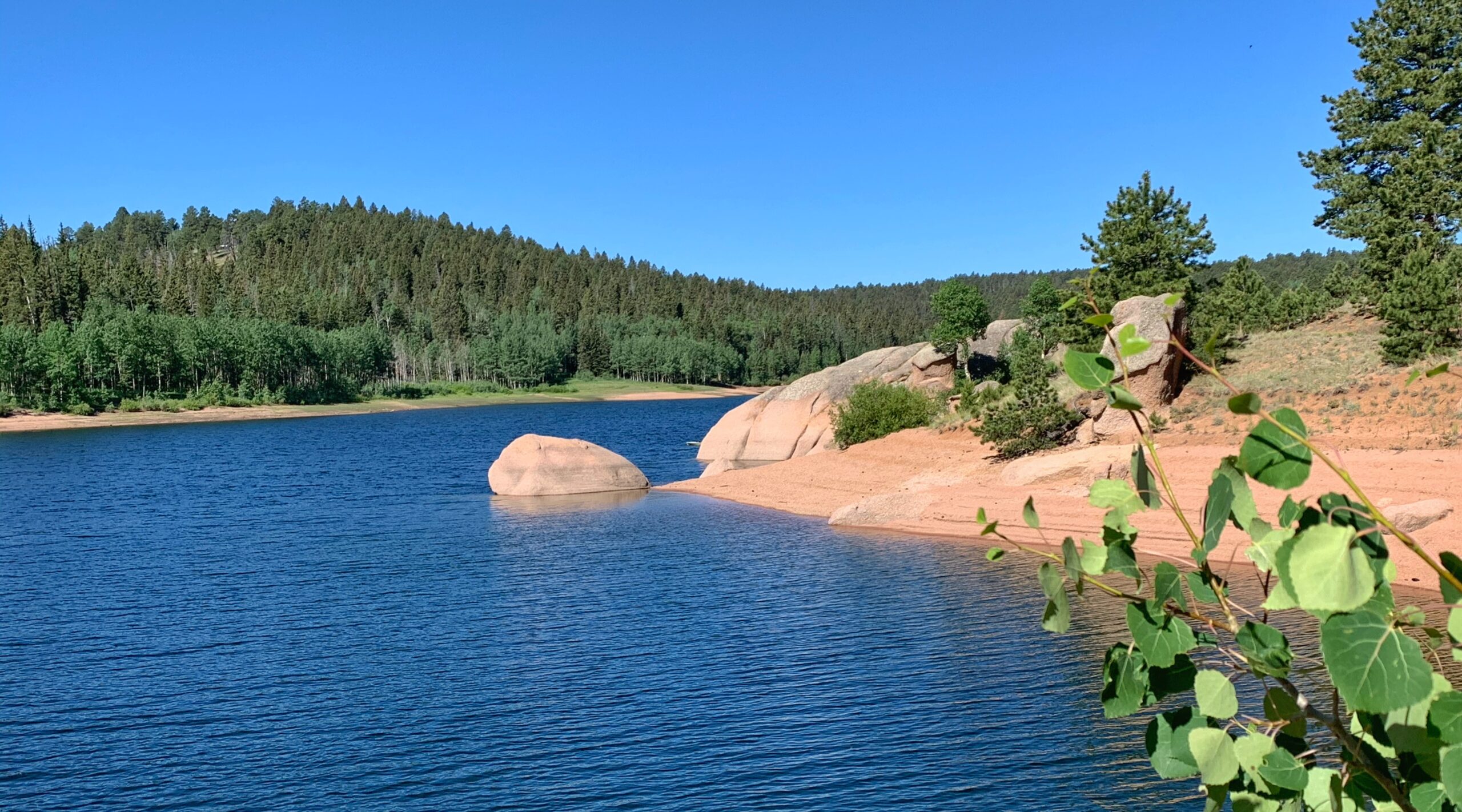 North side of Pikes Peak from Rampart Range Road. 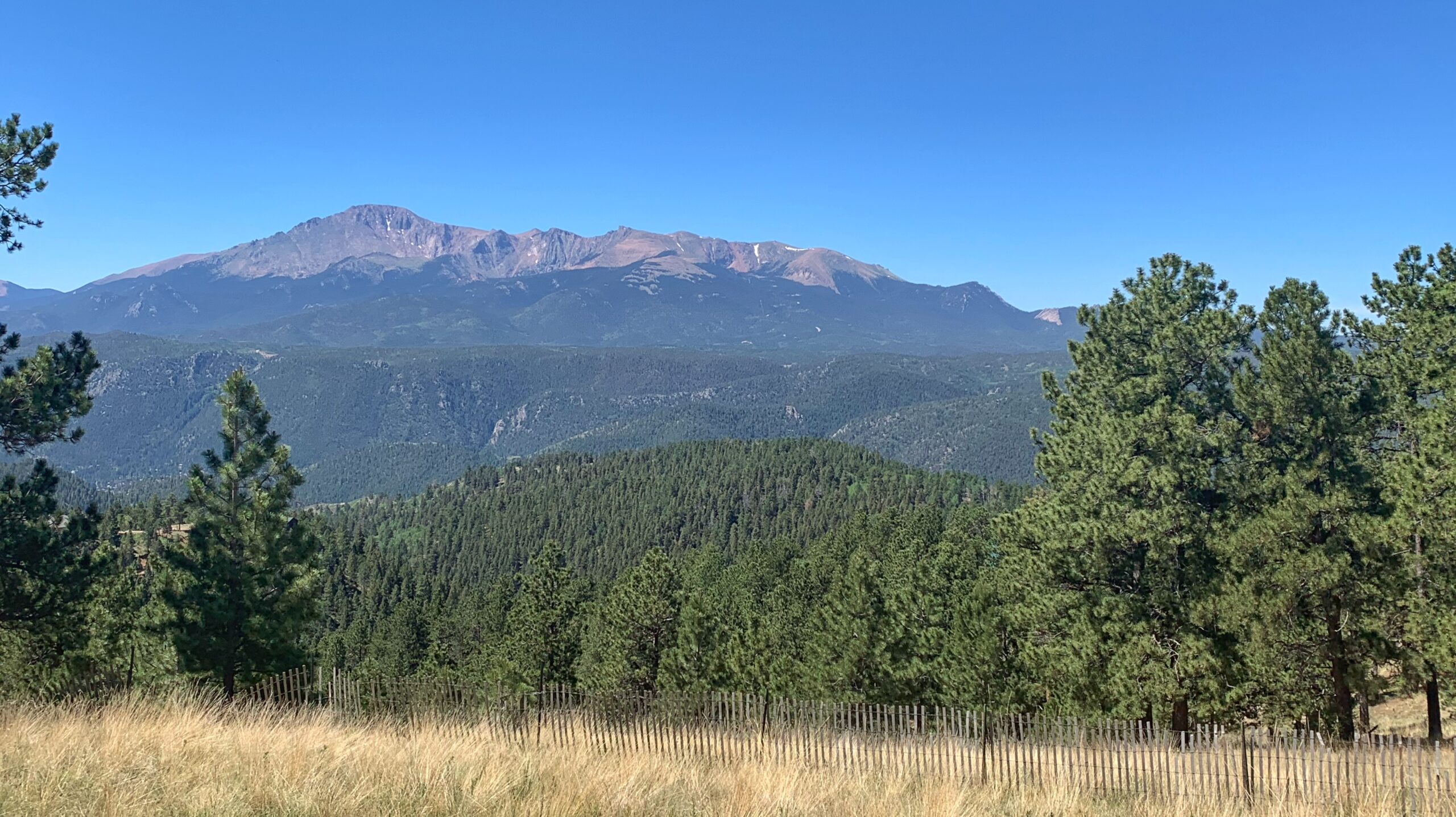 One of the inlets functions as a nursery. A pair of Canada Geese with four rather large but still downy goslings were relaxing on the shore. A female Mallard with five small ducklings were swimming by not six feet away. And a Spotted Sandpiper with a lone juvenile walked along the water’s edge in between. 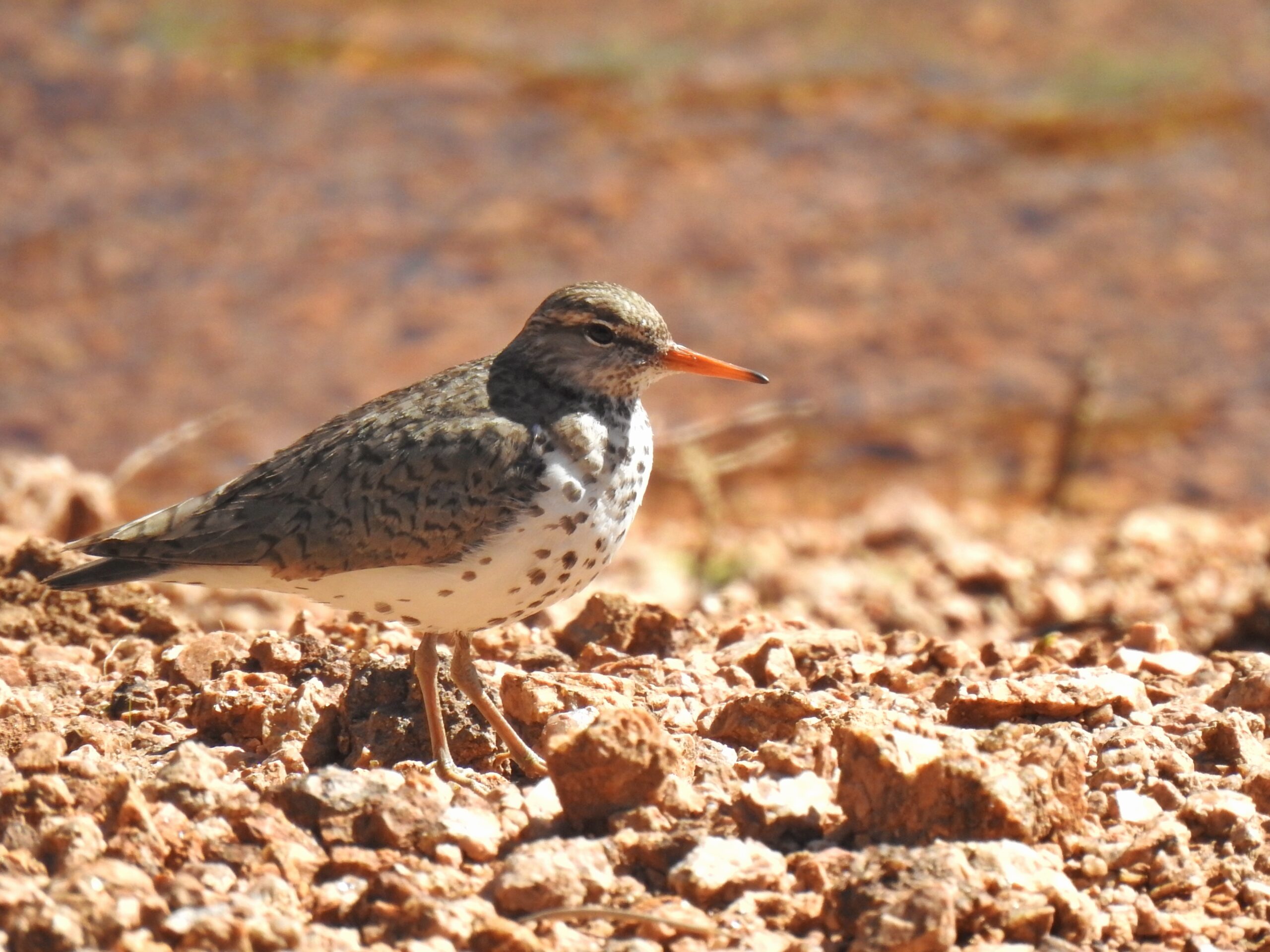 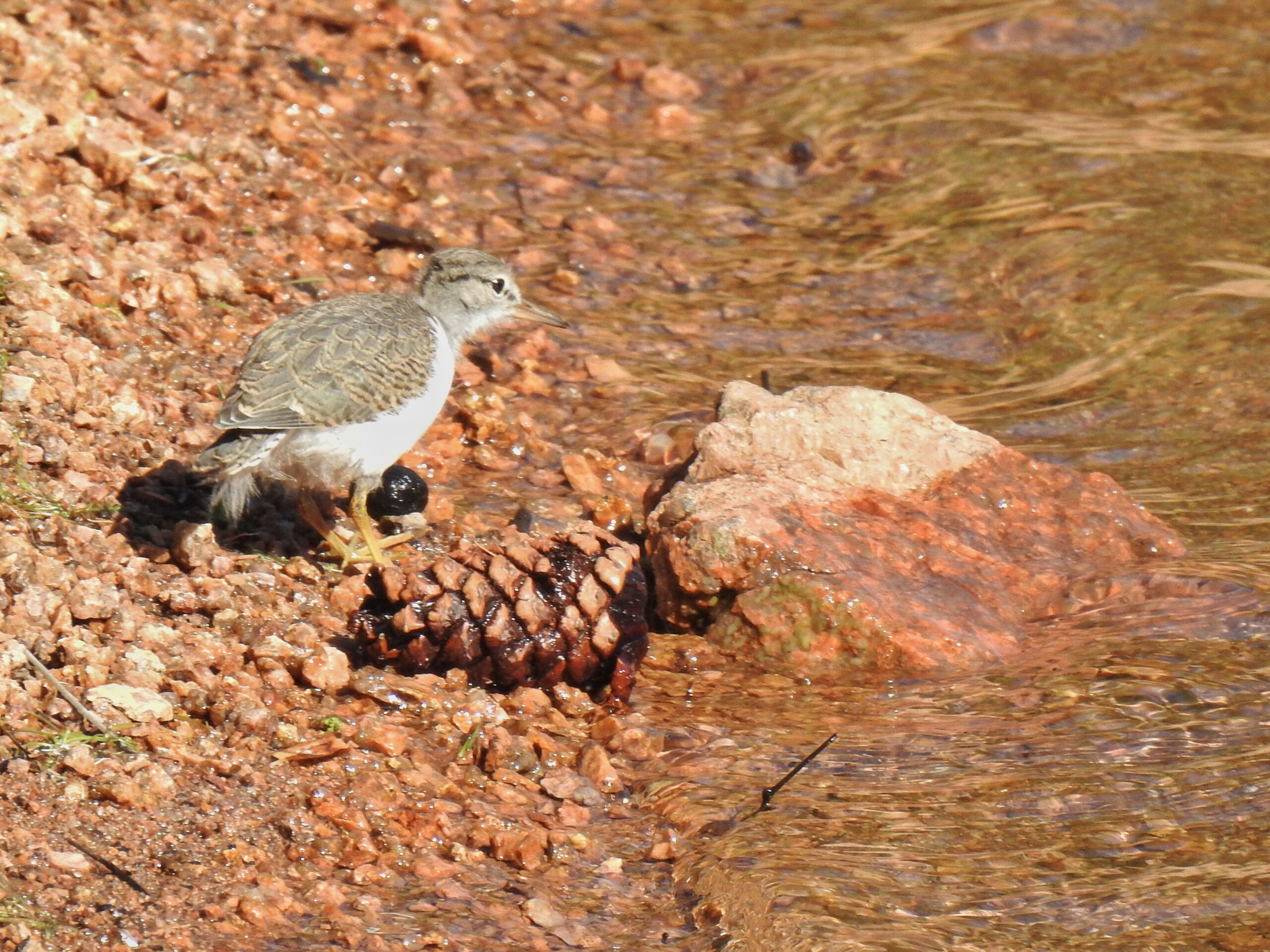 I didn’t spend a lot of time trying for photos, but this Red Squirrel (called a Pine Squirrel out here) froze on a branch not six feet away from me, so I couldn’t resist. 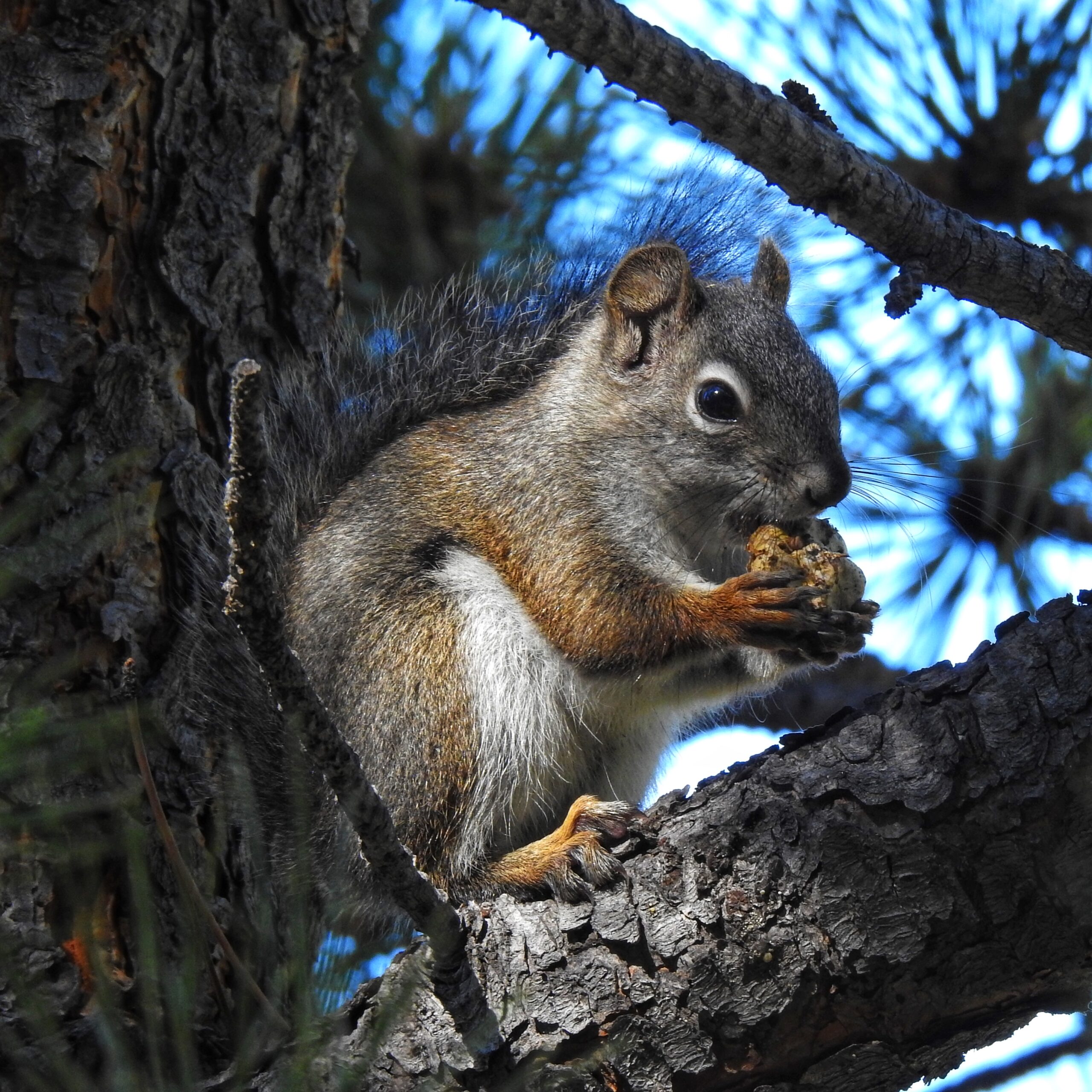 God could not have us in His presence with sin upon us. He could not suffer a single speck or stain of sin upon His sons and daughters. The father could not have the prodigal at his table with the rags of the far country upon him. He could go forth to meet him in those rags, he could fall upon his neck and kiss him in those rags,—it was worthy and beautifully characteristic of his grace so to do; but then to seat him at his table in the rags would never do. The grace that brought the father out to the prodigal, reigns through the righteousness which brought the prodigal in to the father. It would not have been grace had the father waited for the son to deck himself in robes of his own providing, and it would not have been righteous to bring him in in his rags,  but both grace and righteousness shone forth in all their respective brightness and beauty when the father went out and fell on the prodigal’s neck, but yet did not give him a seat at his table until he was clad and decked in a manner suited to that elevated and happy position. God, in Christ, has stooped to the very lowest point of man’s moral condition, that, by stopping, He might raise man to the very highest point of blessedness, in fellowship with Himself. From all this, it follows that our sonship, with all its consequent dignities and privileges, is entirely independent of us. We have just as little to do with it as Abraham’s dead body and Sarah’s dead womb had to do with a seed as numerous as the stars which garnish the heavens, or as the sand on the sea-shore. It is all of God.

[This quote is from an argument against those in America who still wanted to reconcile with Great Britain in 1776, but the categories apply to so many other topics.] Though I would carefully avoid giving unnecessary offence, yet I am inclined to believe, that all those who espouse the doctrine of reconciliation, may be included within the following descriptions, interested men, who are not to be trusted; weak men, who cannot see; prejudiced men, who will not see; and a certain set of moderate men, who think better of the European world than it deserves, and this last class, by an ill-judged deliberation, will be the cause of more calamities to this continent, than all the other three.

Fans like home runs, and we have assembled a pitching staff to please our fans.

— Calvin Griffith, owner of the Washington Senators (from Baseball: A Film by Ken Burns)

All of us have only two options when faced with any kind of adverse circumstance in our lives: One is to respond in fear and anger, which will lead us down the pathway to depression. The other option is thanksgiving which comes from trusting Christ to take our hurts and pains and turn them to work together for our good. But let me emphasize: Neither response will change your circumstances one iota. Your response only changes the way you deal with your circumstance.

Faith always says thank you. Faith thanks God for who He is, for who you are, and for what you are becoming in Him. Faith enables you to give thanks in everything because you truly do believe God’s promise that He will work everything together for good in the lives of His children. Giving thanks also enables you to live in the present instead of worrying about the past or the future. Jesus said, “Who of you by worrying can add a single hour to his life? Since you cannot do this very little thing, why do you worry about the rest?” (Luke 12:25-26).

Thanksgiving is an essential part of renewing your mind; it enables you to begin to see things from God’s perspective rather than your own. It’s the dynamic for resting in God’s peace and, perhaps, even more important, is the visible evidence to yourself that you’re walking by faith and dependency upon Christ.

When any one of our relations was found to be a person of very bad character, a troublesome guest, or one we desired to get rid of, upon his leaving my house for the first time, I ever took care to lend him a riding coat, or a pair of boots, or sometimes an horse of small value, and I always had the satisfaction of finding he never came back to return them.

— from The Vicar of Wakefield, by Oliver Goldsmith (1766)

[The word gremlin] was born during the early stages of World War II, sired by British aviators, but otherwise of uncertain parentage, though possibly from the womb of the Irish term gruaimin, “an ill-natured runt.” He was very small, though wholly invisible. And it was his delight to ride in anyone’s airplane and perform mischievous tricks upon engine, wings, gun, propeller, flaps, or other part, unaccountable but most annoying or disastrous to the flyer. He was just some sort of goblin who resented man’s use of the air for the waging of warfare.

— from Horsefeathers and Other Curious Words, by Charles Earle Funk (1958)