When my sister and I planned to spend a day on the coast, the first thing I did was look on the Internet to find out my chances of seeing a whale. They weren’t good. Gray Whales migrate 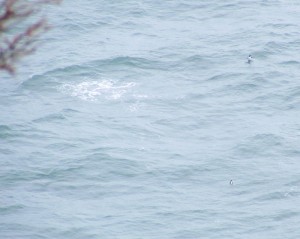 along the Oregon Coast and can often be seen from shore, but the season is supposed to be in March and April — although scattered individuals are sometimes seen later. Even during the peak season, there’s no guarantee that one will be spotted. But all day long, I took wistful looks out to sea.

We were standing on the cliff above the ocean, looking south toward Three Arch Rocks. I was basking in the enjoyment of Steller’s Sea Lions and Western Grebe when suddenly, right where the grebe had been swimming, there was a whale. See that photo on the right? Look at it and imagine a 15-foot long gray mound with light gray splotches on it. I didn’t see the whole whale, just a rounded part of its back. I also saw the blow-hole with a little spray coming out and heard a whooshing sound.

I screamed “There’s a whale.” The others looked where I pointed, but the moment was gone and so was the whale. But maybe a minute later, my sister yelled and pointed. It, or another one, had surfaced in almost the exact same place. We scrambled with our camera, but weren’t fast enough. At least all three of us had seen it.

We were standing there reveling in our joy when a guy walked up. He struck up a conversation with us. Turns out he works in the human resources department of the lumbering company that owns most of the peninsula we were standing on. He said we were very lucky to see a whale that late in the year. He chatted with us for about 15 minutes and was still around when we spotted a couple spouts of spray far out off the point. We didn’t see the whales that were making them, but we saw the spouts.

Because I didn’t get a photo of the whale itself, I took a picture of the sign that was posted by the lighthouse.

Number two on my list, if I had a list, of things I want to do before I die is now “see another whale.” That was cool. And number three would be “have your camera ready, you idiot.”