A friend and I were out on one of the low sand hills in the center of the marsh (very close to where I saw the Red-necked Phalarope in 1984) when we spotted this bird.  It was moving about on a small mud flat in an area that had some open water, many patches of reeds, and a few flats.  The bird was about 60 yards away.  I looked at it through my scope and began eliminating possibilities.  It was just a bit smaller than the Killdeer that was on a nearby flat, and it looked elongated, but it was too far away for a good view.  All I could tell for sure was that I couldn’t tell what it was, but that it might be interesting. 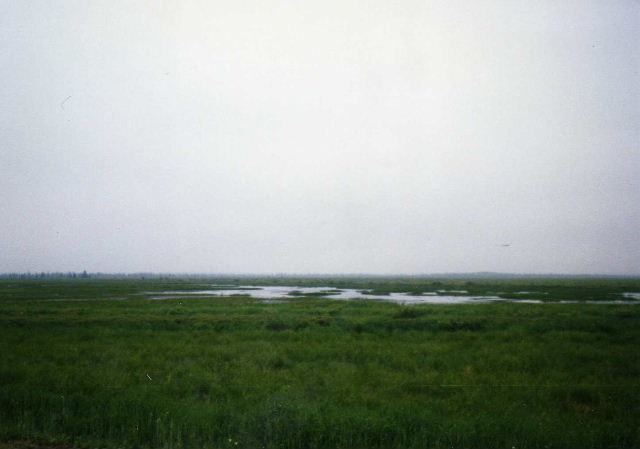 After about five minutes of this, the Killdeer kindly flew to the same flat and chased the bird I was looking at.  It flew toward us and landed on another flat about 40 yards away.  I could now see it well.  Its wings extended about half an inch past the tail.  Its chest was spotted and the spots extended in two or three orderly rows along the sides below the wings.  It looked gray overall, with some rufous areas on its head, back, and wings (no sense of buffiness as in the Baird’s Sandpiper I saw six weeks ago) and a thin, white “V” on the back.  The legs and bill were black.  It fed by sticking its bill in the mud and moving it rapidly up and down in a sewing-machine motion.

I was watching through my binoculars when it flew a short ways and I thought I saw a white rump flash against a dark tail, but I didn’t feel real good about the view.  A few minutes later, I was using the scope when it flew again, again for a few yards.  I was ready for it this time and saw the white rump well.  Before both flights, it had worked its way along the tiny flats and then paused at the end before taking off.

We watched it for a while, then headed back the way we had come.  We soon came upon a second levy that ran parallel to the sand hill we had been on.  We walked back again and got another view from about 20 yards away.  The bird didn’t fly again, but we got excellent views of its long wings and spotted flanks.