This bird was first reported on Monday along with a Pomarine Jaeger. I read the reports each day but didn’t think much about it until yesterday. Since both birds were still hanging around, I decide to go for it. Two lifers, both of them rare and hard to identify, seemed worth the effort. And effort it was. I left home at 6:30 a.m. and arrived at the refuge at 10:40. I parked at Eagle Bluff, where a levy extends all the way across the lake. This is the same place where I saw my lifer Marbled Godwit back in August.

A birder was standing in the parking lot, scanning the area. He said the Long-tailed Jaeger was being seen on the western end of the levy. The Pomarine hadn’t been seen all day. I started walking the three-quarters of a mile to the other side. About half way across, I came upon two birders in a pickup. They told me the Long-tailed was up ahead, near where a lady was standing. When I got within 30 yards of her, I set up my scope. 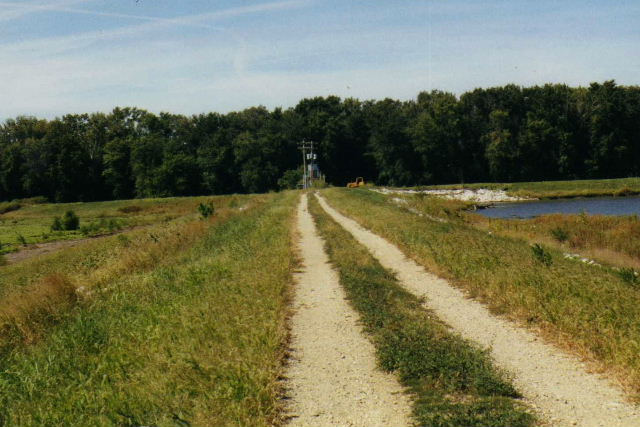 I immediately saw a gull-shaped bird standing on the gravel in one of the ruts about 20 feet in front of her. My first impression was of a dark bird with a silver head. The lady motioned me forward, and we looked and chatted for the next half hour. The jaeger paid no attention to us. It walked about slowly in the rut, sometimes away from us, sometimes toward us. Occasionally it wandered into the grass in the center of the road to snatch at grasshoppers. It caught a couple while I watched.

After a few minutes, the guys in the pickup drove up. They made sure I’d gotten a look, then informed us they had to drive by. I didn’t mind because I wanted to see the bird in flight. It wasn’t that easy. The bird didn’t want to move. It stood there while the truck pulled within three feet. Finally it flew up, but only to sail about 20 feet forward. The truck blocked my view. This happened about three times before the jaeger sailed out to the side. It coasted around the immediate area, rarely needing to flap in the stiff cross breeze. When the truck passed, it landed back where it had been. It spent most of the next half hour sitting on the gravel in the rut. We got within 25 feet, and there really wasn’t any need to get closer. We kept watching for the Pomarine. I spotted an immature Bald Eagle grab a huge fish (or turtle?) not far away and an adult eagle in a dead tree about 100 yards away. Two other birders came by and watched with us. The jaeger mostly sat in the same spot, often closing its eyes briefly. If it saw a grasshopper nearby, it stood up and ambled over to the spot. This sleep-feigning technique didn’t seem to work, but it kept trying. The lady walked closer, trying to flush it for a picture in flight. It finally flew, sailing down below the level of the road and alighting back on the road about 100 yards ahead. 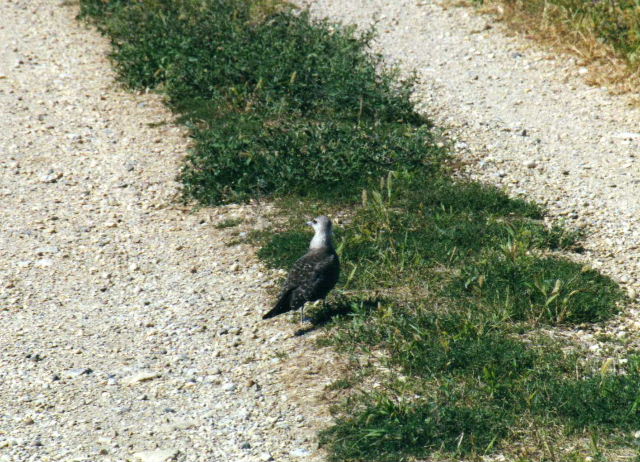 We started back toward the parking lot, the lady and one of the other birders about 40 yards ahead. The other birder walked with me. He was a nice guy, but a bit goofy. We’d gone about 100 yards when he spotted a jaeger hovering over the road just in front of us. He got all excited and started yelling, “There it is, Ray. There’s your bird.”  I got excited too, since I figured he knew of what he spoke. It seemed browner than the bird I’d been looking at, but I couldn’t see any of the other field marks I was supposed to be seeing on a Pomarine. When I didn’t say anything, the other guy got suspicious too. It was the Long-tailed again. It looked browner, I imagine, because the sun was behind it at this point. For about five minutes, it sailed around the area. It would circle around on the south, downwind, brushy side of the levy at or below eye-level. When it got around to the road again, it would rise up and kite in the wind at six or eight feet above the road. After repeating this six or eight times, it sailed back to the area where I first saw it.

Later in the day, around 2:30 p.m., I went back to see if the Pomarine had showed up. There was nobody else around. I took my camera. The Long-tailed was in the same spot, still walking around snatching at grasshoppers. I walked to within 15 feet before it flew, landing again about 20 feet along the road. I did this twice, then stood. It immediately began wandering back in my direction. I had a four-hour drive ahead of me, so I left. 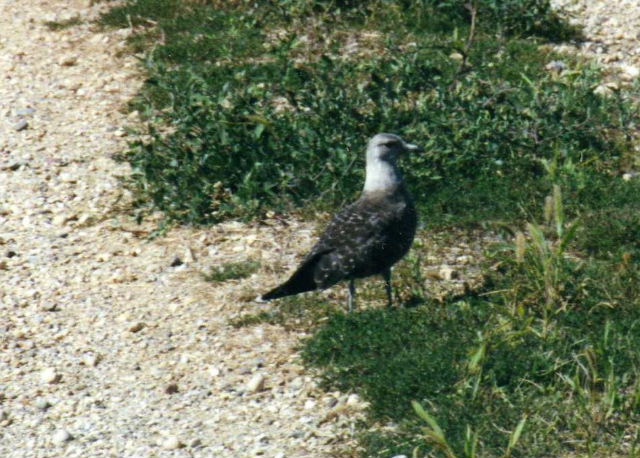 A guy I don’t know who often writes in to IBET gave a very detailed description of the bird on Wednesday. I printed this out and had it with me as I looked at the bird. I had plenty of time to check off the field marks one at a time. It was a smallish bird, maybe the size of a Rock Dove, but slender and stylish looking. I have to admit that if I saw it on the ground, there’s a good chance I would have passed it off as an immature gull. The barring and wing flashes probably would have caught my attention in flight.