During the week between Christmas and New Years, seven or eight species of gulls were reported from Starved Rock Lock and Dam on the Illinois River southwest of Chicago. Most of them were would-be lifers, so although gulls frustrate me to tears, I had to go. An additional inducement was the location. The US Army Corps of Engineers maintains the Illinois Waterway Visitor Center right next to the lock. The gulls reportedly make a habit of hanging around on the narrow strip of grass between the lock and the river, right in front of the visitor center. Viewers can stand inside or outside on two levels. The inside is heated, with huge plate glass windows and bathrooms.

I arrived at the lock a little before 9:30, after a two-hour drive through blowing snow on a very windy day. As I walked up the steps to the second level, I was met by an exuberant fellow who informed me that there were seven in sight. He didn’t seem the sort to be sorting through gulls, so I did some quick thinking and asked, “Eagles?” Sure enough, there were several in view all day, adults and immatures, usually sitting in trees downstream but occasionally flying over the open section of the river below the dam. 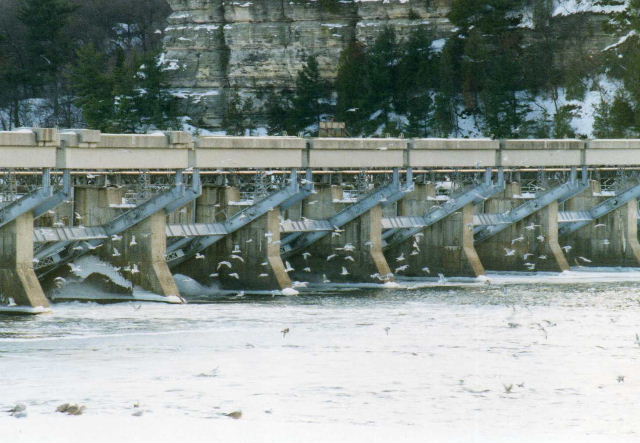 There were gulls everywhere — except on the strip of grass in front of the windows. Many were swimming below the dam. Others flew in circles along the dam walls. Several were scattered on the ice down channel. A huge flock rested on the ice above the dam and out of identification range. The visitor center windows face south, so the sun was a factor all day except for a few periods when bands of clouds passed across the area. Starved Rock, in the state park, was directly across the river.

After 20 minutes or so, a small group gathered on the strip on the other side of the lock, about 40 yards away. These were mostly first-year birds, with a few other ages mixed in, all Herrings. At 10:30, a local birder came in and asked if I’d seen anything interesting. I told him no, but that I was no expert. He told me about the six species seen the day before, then said the gulls were so spread out today it wasn’t worth his while to stay around, and he left. This was discouraging. I hung around for another 45 minutes, then drove over to the state park.

I returned to the visitor center around 12:30. Not much had changed. The sun had moved west, giving me a better look at the small group of gulls in front of the windows. The group had gotten a bit larger, perhaps 200 gulls, but again, they were all Herrings as far as I could tell. I settled in, pointed out eagles to several people who wandered in to see them (and who were very grateful).  I also began resigning myself to another failed day of gull watching. 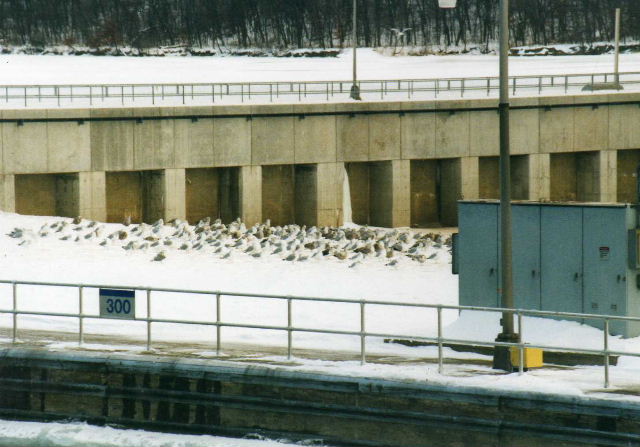 In what might well have been my final scan of the local group, I saw a gull with a decidedly darker mantle. It was in the middle of the flock, so I couldn’t see any other details, but it certainly wasn’t a Herring Gull. It was, in fact, a Lesser Black-backed Gull. I kept looking and soon spotted another one. This one stood on the edge of the flock in plain view. It was noticeably smaller and more slender–looking than the Herring Gulls. Twenty minutes after I spotted it, it took off and dropped below the edge over the river. I soon found it again as it banked and headed toward the dam. Now it really looked slimmer than the Herrings, with longer-looking, more pointed wings. It circled around by the base of the dam, then dove into the river and came up with a small fish. It was immediately chased by a second-year Herring Gull. As it dove to escape the gull, I lost sight of it again.

When I lost sight of this bird, I scanned the flock in front of the windows for other species. Later, when I checked back, I could see three gulls with darker backs in among the Herrings, and one was in clear view and identifiable as a Lesser Black-back. I assume the other two were there also. There were still there when I left at 3:00.