NOTE: When I saw this bird, Thayer’s Gulls were considered a separate species from Iceland Gulls. The two have since been lumped, making this my lifer Iceland Gull and reducing my March, 2002, sighting of a (Kumlien’s) Iceland Gull from a lifer to a subspecies and causing me a great deal of frustration.

After I identified my lifer Lesser Black-backed Gull, I was reinvigorated. The flock of gulls on the strip between the lock and river was getting slowly larger. In addition, the huge flock of gulls that had spent the morning on the mid-river ice well above the dam had now flown down to the open water below the dam. Many of these were wheeling around over the turbulent water just below the dam. Far more gulls were doing this now than at any other time since I’d arrived.

I started at one end of the group on the strip, taking care with each adult to see if it had black tail feathers (I was hoping for an Iceland or Glaucous Gull) and  a yellow eye. I spotted one that seemed to have a dark eye and concentrated on it, hoping it was my lifer Thayer’s. For a number of reasons, primarily because even the experts have difficulty with Thayer’s Gulls, I wasn’t able to convince myself that it was or wasn’t my bird. 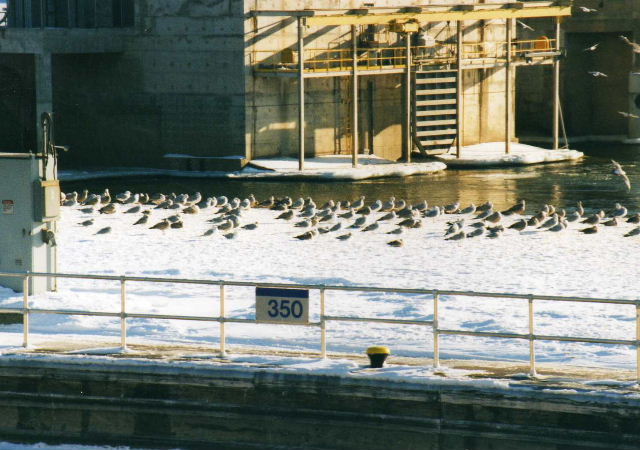 But as I watched it through my scope, another gull floated through my  vision. I had a good, but brief view of the undersides of its wings, and they looked very pale with the only black being a thin line on the tips of the primaries. I lost sight of it momentarily as I scrambled for my binoculars, but spotted it as it landed on the snow near the end of the flock. I found it in the scope again and immediately noticed it had dark eyes. I concentrated on this feature for a long time to make sure it wasn’t a trick of the light and compared it to nearby Herrings for the same reason. The eye was definitely dark. Now what?

The bird settled in, head into the wind (as were all the other gulls) and began preening. I checked my Sibley and National Geographic guides for other marks.

It was very close in size to the Herring Gulls around it. An adult Herring stood just behind it, perhaps a foot away, giving me a good comparison. The Thayer’s smooth gray mantle looked very slightly darker than the mantles of some of the Herrings, but the same color as others. The sun was low and bright, behind the bird but off to the right, and clouds were passing occasionally, so the lighting was changing constantly. Its head was white with fewer streaks than on the nearby Herrings. The head was more rounded. This feature helped me relocate the bird when I would pan the flock to compare Herring Gull traits. Its bill was more greenish/yellow, a bit shorter and perhaps a bit thinner. It had a red spot on the lower mandible, near the tip. Its legs were pink. At times, they looked darker pink than the Herrings’ legs, but at other times they looked to be the same shade. 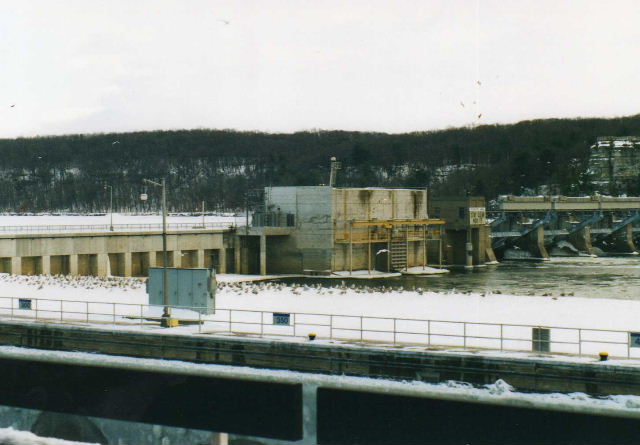 After 10 minutes, the bird finished preening and closed its eye. For the next half hour, it mostly slept, occasionally opening its eyes briefly. Most of the time, it sat on the ice. Oddly, every so often, it would stand up, then immediately tuck its bill into its back feathers and close its eye again. Then, a few minutes later, it would sit down again. Whether sitting or standing, its eye was almost always closed and its bill was almost always tucked into its back feathers. It only deviated from this behavior once. It stood up, stretched one of its legs out while spreading the near wing, then spread the far wing before sitting down again. When it did this, I got good, albeit short, looks at the wing surfaces. The upper wing was the same gray as the mantle. The primaries had black on them, but only on the outer webs, giving the wing tip a lined look. It had white windows near the tips, but I couldn’t count them in the brief time available. After I saw this section of the wing, I watched Herring Gulls until I saw one do the same thing. The Herring’s wing tip was  more extensively black, forming a black triangle on the primaries, except for the white widows at the tips. The stretched under-wing was gray with long white windows near the primary tips. The only dark was a thin line at the very tips of the primaries. Here again, I compared it to the hundreds of nearby Herrings, which had obvious dark undersides on the primaries.

The mark that sealed the identification for me was one I learned about on my gull identification video last night. While the Thayer’s Gull was standing, I could see the underside of its outermost primary on the far wing. This feather was light gray to within two inches of the tip. Then there was a large white window that covered the rest of the length of the feather except for a thin terminal line of darker gray. On several nearby Herring Gulls, I could see this same feather. In their case, the feather was black within an inch and a half of the tip. A smaller white window covered the next inch. The final half inch was black. The pattern on both species matched exactly with what I saw in the video.

Until today, I was sure the Thayer’s Gull was mythical. I now know why I never just happened upon one. I also understand why I never found one, even when I was looking for one. Identifying a bird by the pattern on one particular feather is a level of birding I don’t often get to, although I thoroughly enjoyed accomplishing it today. I left at 3:00 to be home in time for supper. The Thayer’s Gull was still sleeping on the snow.