The Bayside Trail ends at a tall chain link fence that marks the boundary of a naval base. The area on the other side of the fence was a tangle of dark green bushes on the slope above the bay. 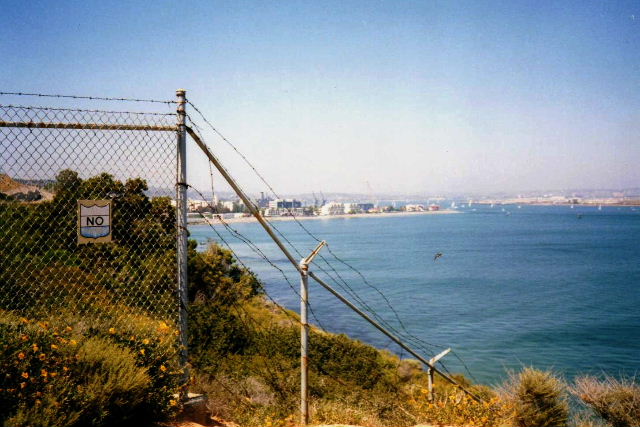 I stood by the fence and looked for birds and enjoyed the view before I started back up the trail. I noticed something blue about 30 feet below and in front of me. I looked though my binoculars and discovered it to be a California Scrub-Jay that was perched motionlessly in the bush. That’s pretty much all it did for the next several minutes except for an occasional turn of its head to one side or another. Finally it dropped down and disappeared into the bushes.

(At the time I saw this bird, it was called the Western Scrub-Jay. The species was split in 2016. Birds near the west coast — which this one definitely was — are now the California Scrub-Jay and ones further east are now known as Woodhouse’s Scrub-Jay.)