sphyrapicus (from sphyra, a hammer, and picus, a woodpecker) thyroideus (from thyreos, a shield, and eidos, resembling)

The Boulder Creek Trail was listed on the park brochure as good for wildlife because it went past several ponds. It turned out that the brochure was outdated. In an effort to return the park to its original appearance, the park service recently removed the dams. There were no ponds. There were a lot of woods and meadows, however, and two lifers. The start of the trail ran along the edge of a large meadow. To the south was an open grove of pines. As I walked along, I saw a boldly patterned black and white bird fly over the trail up ahead. I was unable to follow it, but I suspected it might be a Williamson’s Sapsucker. This was a bit discouraging because, as usual, I began pondering the worst-case scenario and figured I wouldn’t see another one.

Not to worry. About five minutes later a woodpecker flew right past me and landed in plain view on the trunk of a pine approximately 50 feet up ahead. It was a female Williamson’s, and it was in no hurry to get out of my view. I watched it for a minute or two, then heard a loud “squalck” behind me. I turned in time to see a male flying at head height right up the path toward me. It landed in a second pine about 20 feet away. After a minute, it flew to the tree where the female was foraging. The two climbed around for a little while, then flew off together, calling and chasing, into the woods. 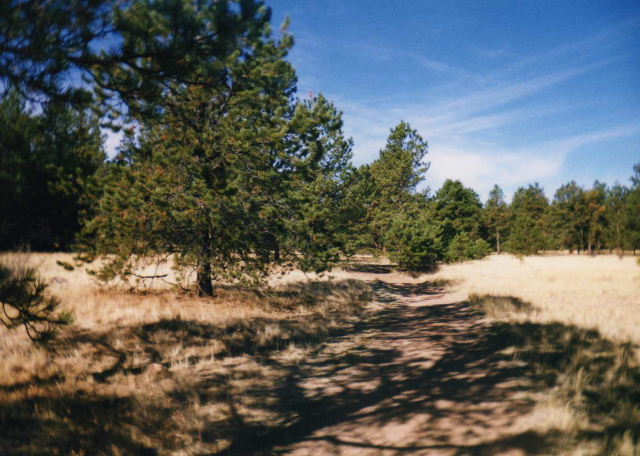 Five minutes later I saw them, or another pair, in the woods on a ridge. They were also calling and chasing from tree to tree, paying no attention to me. The male flew down to the ground briefly. I saw a third pair later (or the same pair a third time) further to the west and further back in the woods.

This was my favorite lifer of the trip, somewhat to my surprise. The female was interesting looking with her pale brown head, yellow belly and black and white barring pretty much everywhere else. The male was an extremely pretty bird. He was black overall with the usual sapsucker white stripe down his side. He also had two white lines on his head. His chin was a deep, vibrant red and his belly was bold yellow. When he flew, the white patches on his wings and rump contrasted with his black back and wings and flashed in the sunlight.

The setting, the solitude and the beauty of the bird combined to make this a great moment. This is why I’m a birder.