Garden of the Gods is the chief tourist attraction of Colorado Springs (along with Pike’s Peak) and was also billed as a good place to bird. I got to the park at 11:30 and walked around.

The rocks are impressive. Some are split into layers like a loaf of bread with sky visible between the slices. Others have holes into and through them. Odd outcroppings jut out everywhere. Rock climbers were working their way up or rappelling their way down several of the rocks, which did nothing for the view in my opinion. Pike’s Peak provided a stunning backdrop to the south, but Colorado Springs sprawl is encroaching on the gardens all around.

I saw tons of Rock Doves and White-throated Swifts flying around, but the bird I was looking for was a Prairie Falcon, which nests on the rocks every year. I walked around Cathedral Spires and past South Gateway Rock, then along the east side of North Gateway Rock. Two Mule Deer were eating leaves at the base of White Rock. I kept looking up and found my bird about 20 minutes after I’d started walking. 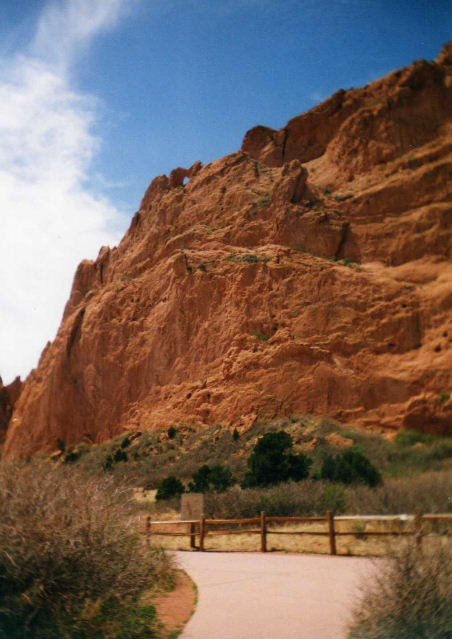 A large bird that was obviously a falcon was gliding over the top of the rock. It circled around, then dipped down the face and disappeared onto a ledge. Moments later I saw another one, or the same one a second time. It was gliding out from the face of the rock. After about 10 seconds, it landed on another ledge about a quarter of the way down from the top.

I didn’t see anything more of it for about 10 minutes, but I wanted one more good look. I walked into the parking lot north of the rock. I spotted it stooping down from over the top of the rock to a small ledge where it landed. This time I could see it well, although it was a long way up above me. It stood on its tiny perch, its head almost touching the overhang. It looked around and, on one or two occasions, preened its inside wing lazily. It was still there when I left. I felt guilty walking away from such a cool bird, but I had to get back to the motel. I’d been in Colorado for almost 48 hours and hadn’t yet done anything remotely work related.

The Prairie Falcon was a flat medium brown on the back and white with brown streaks on the breast. It had long sideburns extending down from its brown cap. While it was soaring overhead, I saw the dark armpit marks that extend down the wing. Its wings were pointed falcon-like, but not as pointed as the wings of Peregrine Falcons.