vermivora (from vermis, worm, and vorare, to devour) virginiae (for Virginia Anderson, wife of Dr. William W. Anderson, an assistant surgeon, U.S. Army, who discovered the bird in 1858 in New Mexico)

I arrived at Valco Ponds State Wildlife Area west of Pueblo a few minutes after 2:00. This wasn’t a very impressive area. The Valco Cement Plant was to the immediate east and, in fact, owned the ponds themselves. A dirt path ran between the ponds and the Arkansas River. The banks of the river were lined with scrubby bushes with numerous paths made by fishermen. 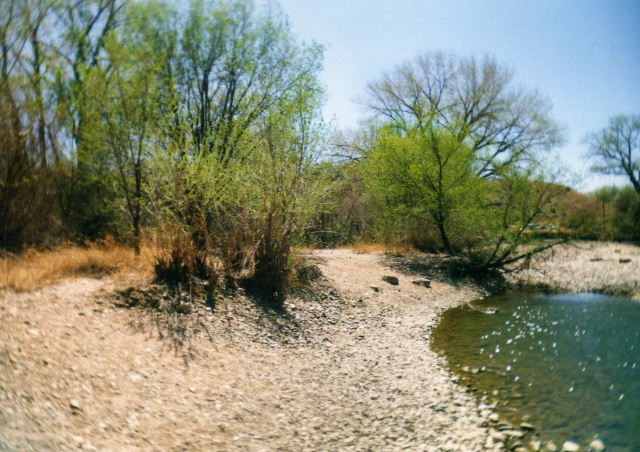 As soon as I got out of the car, I met a local birder. I asked him what he’d seen, but he didn’t mention anything of interest. I headed toward the river down one of the paths through the trashy brushy area. Almost immediately I saw a male Audubon’s Warbler. Four American Pipits were walking on a gravel bar in the river. I heard something behind me and spotted two Chipping Sparrows under one of the bushes. As I watched them, I noticed another bird in the same bush.

It was a Virginia’s Warbler. It was foraging low about 15 feet from the river. I got one good look before it flew off to another bush and disappeared on the other side. I worked my way around the bush on one of the paths and soon found it again. It was moving through the branches about three feet off the ground. I got another good look before a nearby Yellow Warbler chased it off. The two disappeared through the bushes, and I didn’t see either one again.

It was a dull pale gray overall with a pale yellow blotch on the breast. Its rump was yellow-green and its undertail coverts were bright yellow. It had a bold white eye-ring. I was concentrating on the field marks and so didn’t have much chance to notice its behavior.