After I left Valco Ponds, I drove three miles up the road to Lake Pueblo State Park. The park was basically a large reservoir surrounded by desert. Stunted juniper trees grew on some of the bluffs above the lake, but most of the park was dead grass and rocks. There were some cottonwood trees and grubby brush along the river below the dam.

I stopped by the park office to ask for a bird list. There wasn’t one. I stepped out on the balcony and scanned the lake. There was a small sand bar about 15 feet from shore not far above the dam. It was covered with gulls, which I figured were probably California Gulls, a lifer for me. In the water next to the bar was a large maroon wading bird. It had to be an ibis, and based on range it had to be a White-faced, another lifer. I parked and walked down the slope to the lake. The water level was very low so there was a wide level area beneath the bluff. When I was within 50 yards, I stopped and scanned the flock. I walked forward about 10 yards and looked again. I kept repeating this until I was right up at the edge of the water. The birds never paid me the slightest attention. 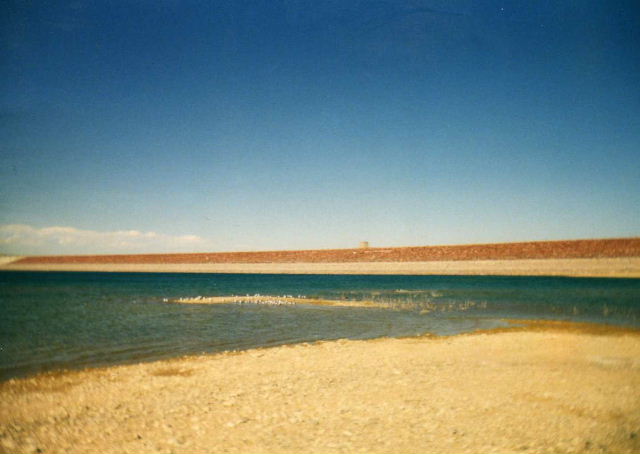 As I got closer I saw four American Avocets standing in the shallow water next to the ibis. The bar and the shallow water around it were packed with California Gulls, Franklin Gulls and Forster’s Terns. For the half hour I was in the area, the ibis did very little. Most of the time it just stood there. It did take a few steps one way or the other and preened its back feathers a little bit. It was still there when I left.

It looked very similar to a Glossy Ibis, deep maroon with glossy green on its wings and tail. Its bill was gray, its eye was red and its facial skin was dull red. There was a thin white line surrounding the facial skin. Its legs were deep red.