I walked along the river below the dam expecting to see a lot of migrants. I saw very little, migrant or otherwise. It was too late in the day to drive to another location, but I didn’t want to give up on Colorado birding with two hours of daylight left. I decided to make a determined attempt to find a Juniper Titmouse. The information I found on the internet said they could be found in the junipers on both sides of the lake.

I drove west along the north shore and soon came to the Juniper Breaks camping area. Scattered stunted junipers grew over a 40-acre patch on the bluffs above the lake. The area was cut by several gullies and crossed by roads and camp sites. I parked and began walking.

That high up above the lake the wind was strong. All I had to drink was a bottle of water that was hot by this time. I wandered around and saw nothing. I wandered around some more and saw nothing. I left the road and wandered down into a gully and saw two small birds flash into a juniper. I stalked them carefully and discovered a pair of American Goldfinches. That was anticlimactic.

I kept wandering and finally heard a faint chip note. By this time, I was chasing down anything that even remotely hinted at bird. It took me at least five minutes before I could determine which juniper the noise came from. It was another 10 minutes before I saw a tiny drab bird flit from one tree to another. I followed and soon determined there were two in the area. At one point I lost them, but I walked in the direction they were last seen going and soon heard them again. They were in a 10-foot high juniper on the edge of a gully. I stood right next to the tree and peered into the branches. 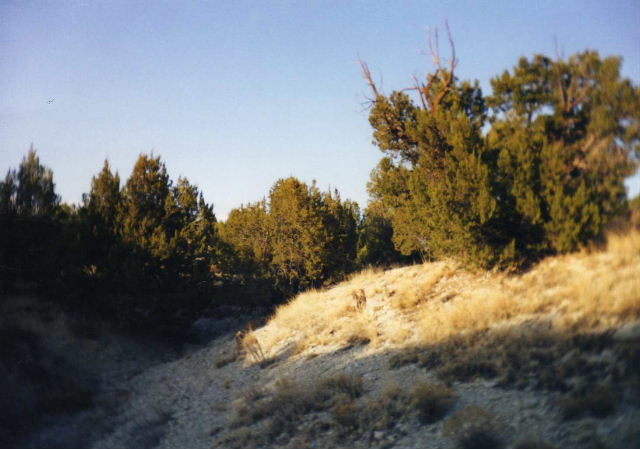 Finally the birds decided to cooperate. They were moving rapidly through the branches in typical chickadee-titmouse fashion. At one point I heard a fairly loud tapping coming from the tree. One came over to my side of the tree and foraged around within four feet of where I stood. I put down my binoculars and saw it well without them. They stayed in that tree for about five minutes, then flew off. I went off in the opposite direction to try to track down an interesting bird I’d seen while stalking the titmice, but I never found it.

The one I saw well was a dull gray-brown all over with a short, scraggly crest. It was smaller than a Tufted Titmouse.