This bird was reported on IBET earlier in the week. I drove up after lunch and saw it within five minutes of getting out of the car. It was swimming along the harbor breakwater with two female Common Goldeneyes. They soon passed it, and it turned toward the center of the harbor, swimming steadily. 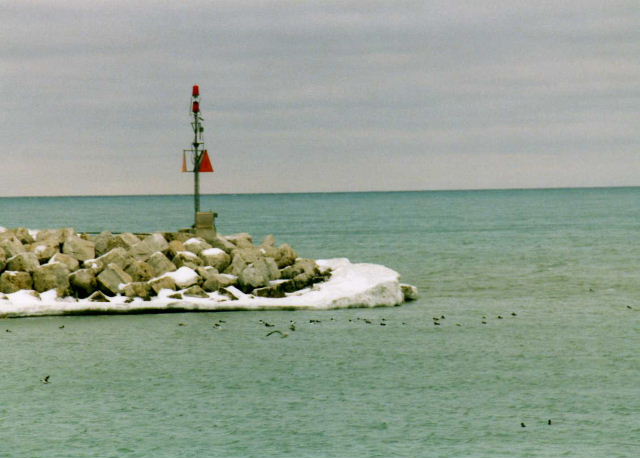 A little while later, it was back along the breakwater, swimming in a small area and diving frequently. The dives usually lasted about 20 seconds. It would hop up a bit and extend its neck before diving. When it resurfaced, it bobbed to the surface as though it had a lot of buoyancy.

I returned to the car to get my camera. When I got back to where I could see it, it was near the harbor mouth swimming with a flock of goldeneyes. At one point, it reared up and flapped its wings. It was a smallish duck, about the size of the goldeneyes, with a tiny gray bill. It was steely blue overall with startling contrasting patches of while outlined by black. Its flanks and a small patch on the crown were a rich brick red. It looked particularly interesting when swimming head-on to me. The white crescents on either side of its face were only separated by a thin dark line. This gave it a rather bizarre look. It’s long tail was usually held straight out right at the water surface, but occasionally it was held out of the water.

I didn’t stay too long because the wind off the lake was making me miserable.