This Hawk Owl was seen almost daily at Harrington Beach State Park, about 30 miles north of Milwaukee, for the better part of a month. I wasn’t doing much birding this winter, and so kept putting off a trip to see it. But people kept reporting it, and it is a very rare bird this far south. I began to feel guilty about not going. I decided to take a day off work and go.

My car had 208,300 miles on it and had been breaking down regularly, so the drive was something of a risk. I brought my wife’s cell phone, a stack of CDs, and my digital camera. I left home at 7:45 and drove up Route 31. When I stopped for gas in McHenry, I was struck by how gloomy and overcast the day was. The wind was whipping across the parking lot so hard it made it difficult to stand upright. I almost gave up. I paused on the way out of the gas station, debating what to do. Then the thought struck me that, when I was younger, nothing would have stopped me from making the effort. Was I a man or a mouse? And I’d already taken the day off. I turned north.

As soon as I got north of Milwaukee, it started to rain. When I got to Harrington Beach State Park at 10:15, it was half raining, half snowing and completely miserable. I paid $6 for two hours in the park. The guy at the entrance booth said he’d seen the owl the evening before, and he gave me a map on which he had circled the most-likely location.

It isn’t a large park. The western two-thirds is grassy with stands of small trees. The eastern half is more thickly wooded. I drove back and forth on the main road three or four times. There was one other birder in the park, also driving around. At one point, when I pulled into a lot, he pulled in next to me. He told me he’d been there since 7:30 and hadn’t seen the owl, but he’d seen it on four previous days. He said it wasn’t always along the main park road, so after he left I drove around some of the other areas of the park.

When I got back to the spot the ranger had circled, I slowed down and soon spotted the owl about 40 feet back from the road. The field guides all said it usually sits shrike-like at the very top of a tree, so that’s where I’d been looking. But when I spotted it, it was about six feet off the ground in a small stand of trees, right at the edge of a small opening. 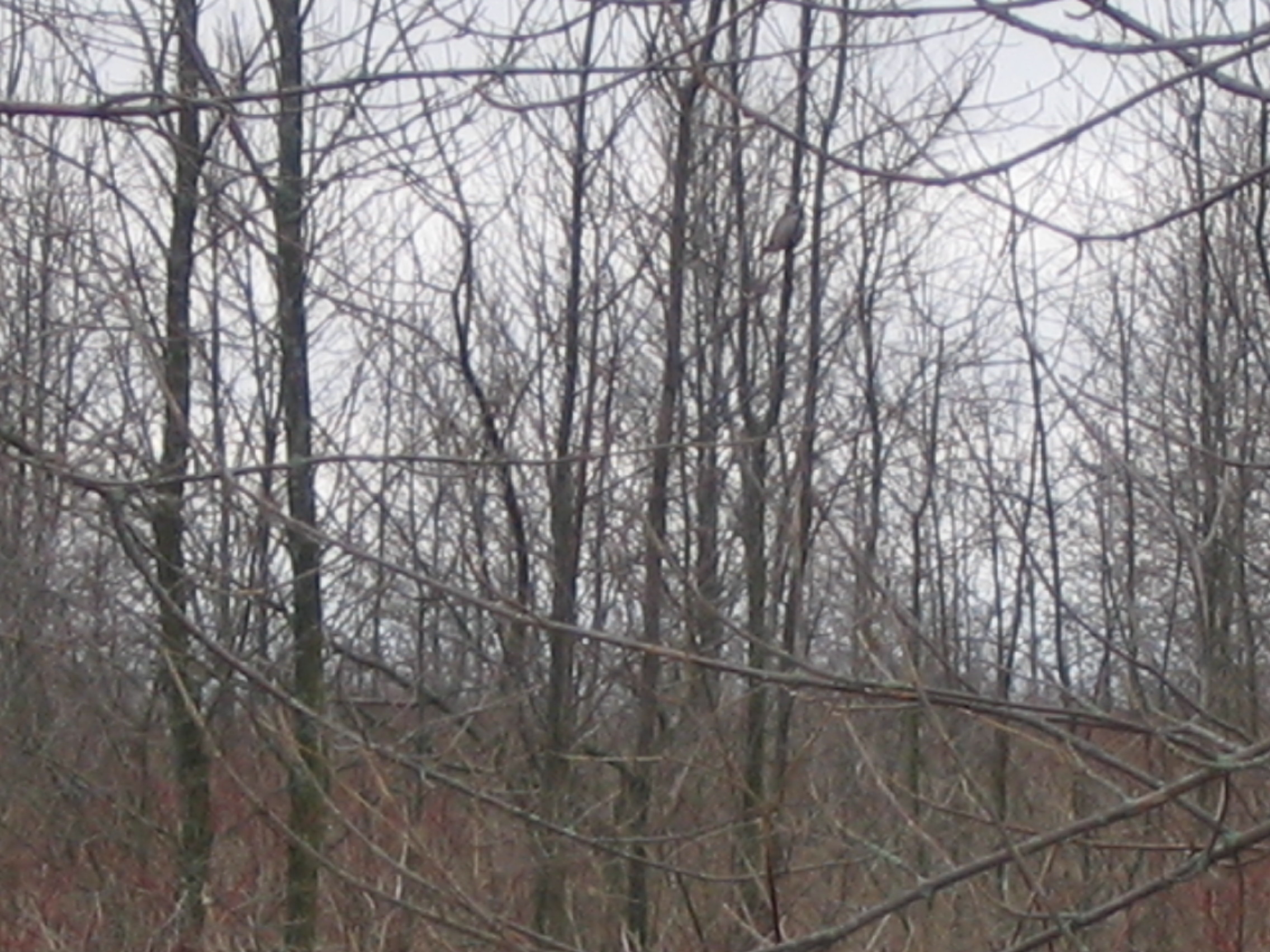 I parked and watched and took pictures for the next half hour. I was too far away to get a good shot, so in desperation I held the camera up to my telescope. What came out wasn’t great, but it was much better than I expected.

The other birder pulled up behind me for about two minutes, then pulled next to me. He rolled down his window and said, “patience pays off,” then left the park. (He’d driven around for three and a half hours to look for two minutes …)

Anyway, the owl didn’t pay much attention to me. It frequently swiveled its head around 180°, to look for prey I suspect. After five minutes or so, it dropped down, flew a short way, then rose up to land further back in the stand of trees about 25 feet off the ground but still not at the top. It looked around some more, preened a bit, then hopped to another branch a few feet away. 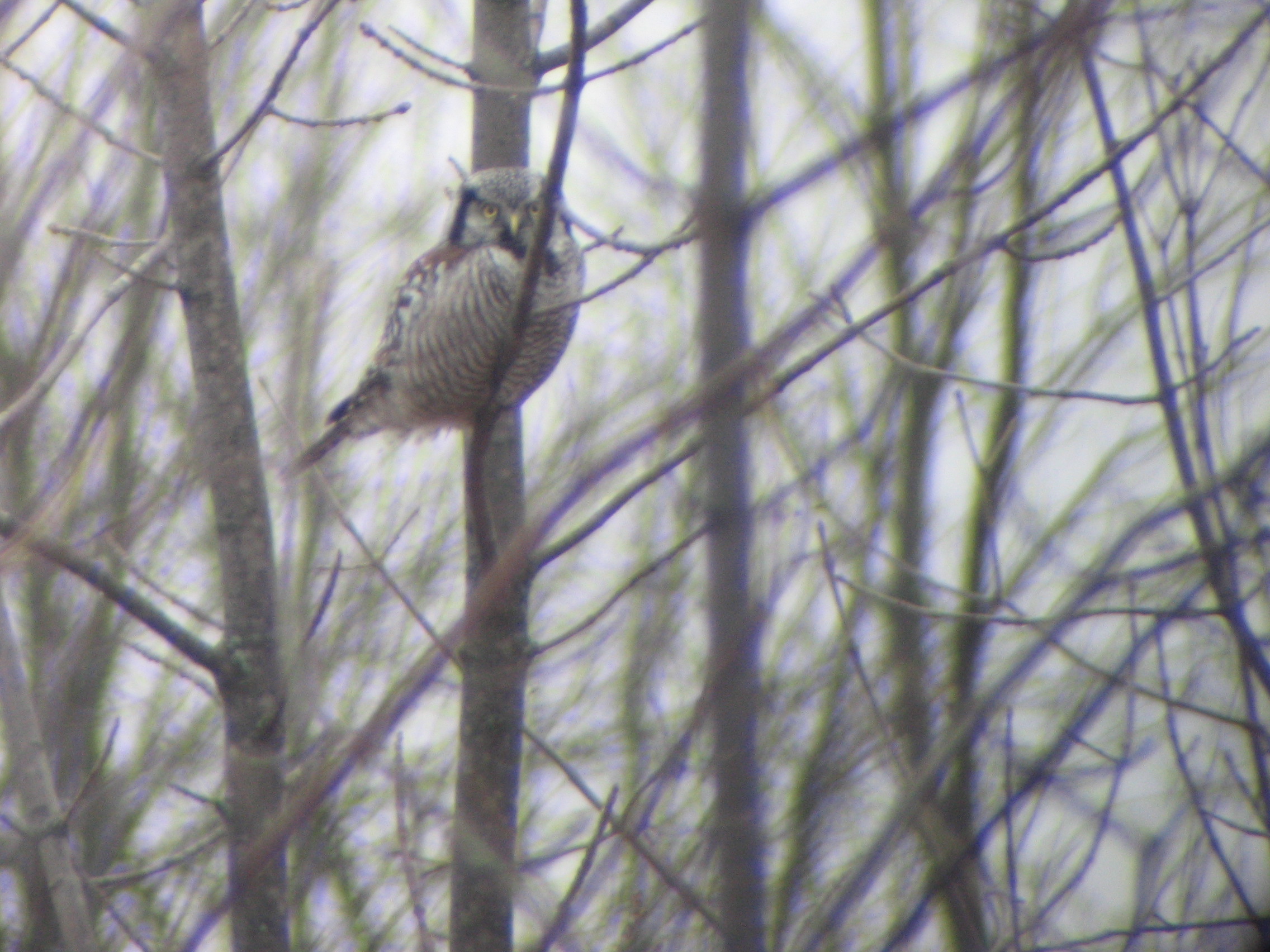 While I was watching the owl, the cell phone rang. It was my wife, worrying about whether the car had blown up or stranded me somewhere. She was much more worried about me making it home than she was excited about me seeing the owl. I was frustrated because I wanted to share my excitement with somebody, so I held the cell phone up to my telescope (it isn’t a camera phone), but she wasn’t impressed.

My car was faithful, and I made it back home without problems. I was very glad I’d been a man and made the trip.