Since we had a free trip to San Antonio, we decided to take a few extra days and see the sights. My sister and I are both into history and enjoy touring president’s homes, so we got up early on Sunday morning and drove 60 miles north to Johnson City to see LBJ’s boyhood home and ranch.

We arrived about 20 minutes before the park opened. We wandered around by the visitor center and enjoyed the coolest weather of the week. Or at least I enjoyed it. My sister mostly complained about it (just kidding). It was probably 55 degrees, but it warmed up quickly. I was trying to get a photograph of a Mockingbird when I heard a bird calling on the other side of the parking lot. I knew it was a raven, but which one?

The Common Raven and the Chihuahuan Raven look very much alike, differing only in size, range, call, and the color of the base of the neck feathers (this last field mark is almost useless because how often do you get a look at the base of feathers?). Identification is tricky because the two species overlap in almost all of their characteristics. I’ve seen Common Ravens many times in northern Wisconsin and other places and am familiar with their call. (I’ve even had conversations with them upon occasion.)

This bird’s call was a single-syllabled croak that sounded higher and hoarser than the Common Raven’s while still sounding raven-like. I soon spotted the bird on top of a phone pole. I got a brief look at it with my binoculars and was moving closer for a photograph when it took off. I snapped a quick shot. 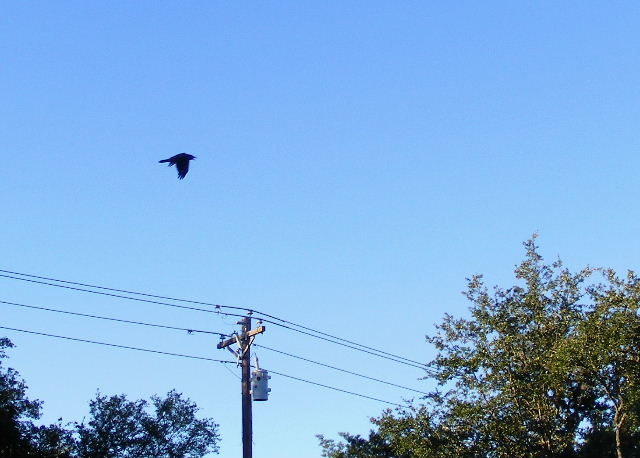 I thought it was probably a Chihuahuan Raven, but wasn’t sure. A few minutes later, a ranger drove up. He raised the flag in front of the visitor center while my sister looked on. She mentioned the raven and he told her it was definitely a Chihuahuan. They’re rare 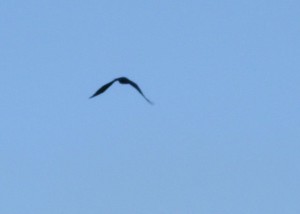 in that part of Texas — the extreme eastern edge of its range, but the Common Raven has never been seen in the area. I checked the ranges of the two birds in my field guides and on the internet and listened to recordings of their calls and I’m convinced.

We saw the bird again about half an hour later and half a mile away as we toured the Johnson Settlement. It called a few times and flew overhead. I snapped another photo which, for identification purposes, is absolutely useless.

Here’s my sister and the ranger having their own little flag-raising ceremony to which I wasn’t invited. 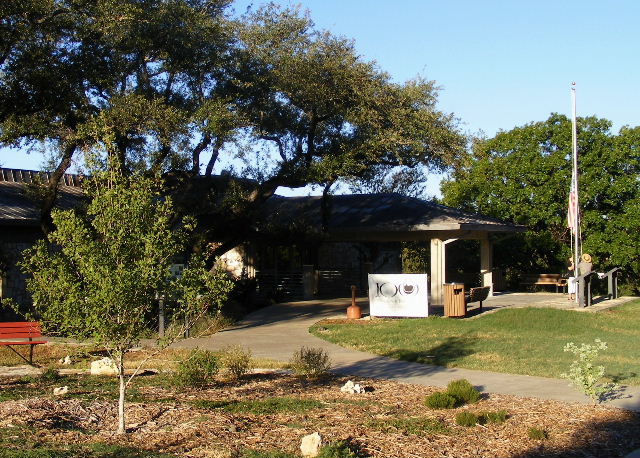