numenius (of the new moon, referring to its bill) americanus (of America)

Mustang Island was out of the question, and we’d seen what there was to see at Rockport Beach Park. My sister (who had been off on her own photographic adventures) 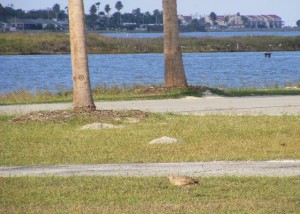 and I headed back for the car for the long drive back to San Antonio. We were about 30 yards away from the car when I spotted a large shorebird foraging on the lawn between the parking lot and the hiking path near the inner bay. I thought it might be a Long-billed Curlew, but its bill was shorter than I’d expected. I took a quick look at my field guide to rule out Whimbrel (which has a striped head and is gray rather than buffy). It confirmed my guess and also informed me that immature Long-billed Curlews have shorter bills. So I had my first lifer of the day.

It wasn’t paying us a lot of attention, but whenever we got too close, it moved away. I took a quick snippet of video, but I was running out of memory, remember …

It moved closer to the shell-shaped Rockport sign seen in my last post. There were some short palms along the edge of the area, so I crept slowly around behind them and got within ten feet of the bird. It acted nervous at first, but then went back to picking at the grass. 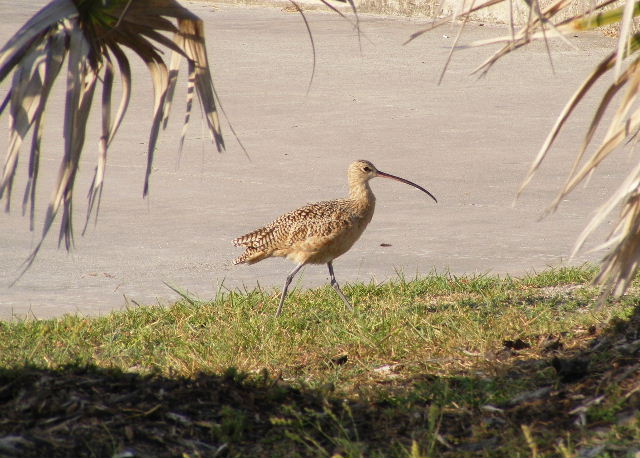 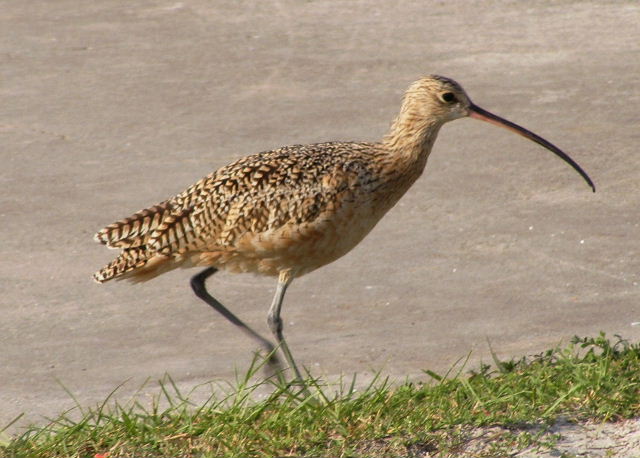 Long-billed Curlews are the largest North-American shorebird, and full-grown adults can have bills as long as their bodies. I would very much like to see one of those some day, but I still thought this was a very cool bird. It made the whole day worthwhile to me.

As we were pulling out of the parking lot, I was surprised to see a flock of eight or ten Marbled Godwits, which look very much like this curlew, but with the bills curved up! I’ve seen them once or twice before and I was out of memory on my camera again, so I didn’t get any pictures.

We drove back up to San Antonio on the interstate and enjoyed a sunset that was spectacular not so much for the color (which was very nice) but for the massive amount of sky there was for it to be colorful in.