toxostoma (from toxon, bow, and stoma, mouth, referring to the bill) longirostre (from longus, long, and rostris, beak)

Like I said, the guy in the visitor center made me copy down the bird list and sent me toward the woods. I was just approaching the area when I heard a bird making a repeated “chat” noise in a small tree. It was a Long-billed Thrasher, another south Texas specialty. It looks a lot like the Brown Thrasher, but is darker brown with grayer cheeks and blacker streaks on its chest. I walked around the tree trying to find a good angle for a photograph while it stared at me with its bold orange eyeball. 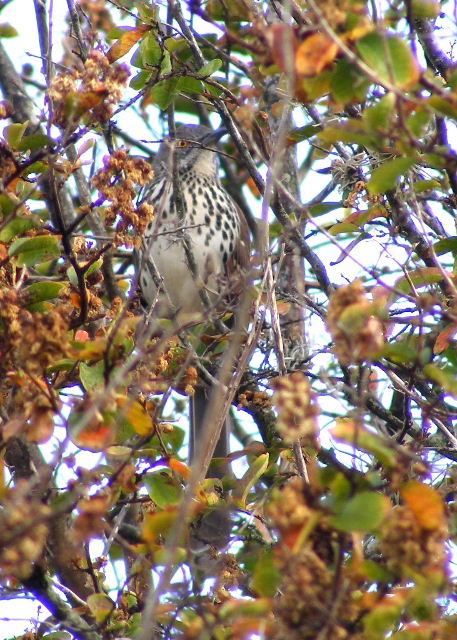 It was finally chased out of the tree into the woods by two Northern Mockingbirds that took exception to its presence. I didn’t see it again for a couple hours, but then my sister and I happened upon it just inside the woods very close to where I first saw it. The thrasher was under a bush demonstrating how it got its name (the “thrasher” part, not necessarily the “long-billed” part, although it was using its bill to … oh, never mind). It was still doing this when I left, just further back in the bush where I could hear but not see it.