The one lifer I was almost sure of seeing in Texas was a Golden-fronted Woodpecker. But here it was, mid-morning on Tuesday, and I was heading for the airport in an hour or so. And no woodpecker. I showed my sister its picture in my field guide so she could watch for it as she wandered in other parts of the garden. She had instructions to call me on my cell phone if she saw a woodpecker that looked at all unusual to her.

I was down in the sunken portion of the Conservatory and had just started up the stairs when I spotted a woodpecker fly down and land in a small tree along the wall. I stopped and grabbed my binoculars. It was in the shade, and it only stayed for about three seconds, but that was long enough for me to see that it was a melanerpes woodpecker with a yellow forehead and a yellow nape. I had my bird.

I figured I’d get another, better look at it, but I never did. I might have spotted it about 20 minutes later flying overhead out of the garden, but I’m not sure. But I saw what I needed to see.

If you’re familiar with the Red-bellied Woodpecker that’s common in Illinois, then you’d recognize this bird — they look very similar except that the Golden-fronted is yellow where the Red-bellied is red.

I didn’t get a picture of it, but here’s where I saw it, taken from where I was standing at the time. It was in one of those small trees on the left at the top of the steps. 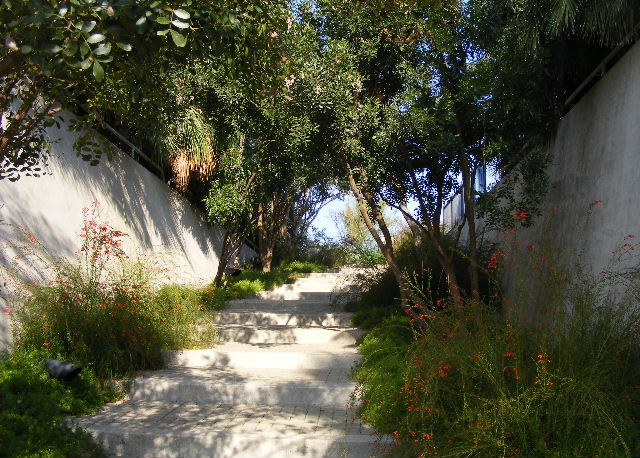