aimophila (from aimos, thicket, and philos, to like) cassinii (named for John Cassin, American ornithologist)

As far as I know, I’ve never been anywhere at the right time of year where seeing a Cassin’s Sparrow was a possibility. They hang out on dry grasslands in Texas, New Mexico, Western Kansas and Eastern Colorado. They’re also nomadic and are often absent from areas where they were common the previous year. I figured I’d have to make a trip to southeast Colorado some summer.

But this week, they were reported in large numbers in the cholla and grass flat lands along Hanover Road in southeast El Paso County. I arrived in the general area around 8:30 am and drove back and forth along the roads with my windows open, listening for the distinct song of the Cassin’s Sparrow. I saw some cool birds—Loggerhead Shrike, Ferruginous Hawk, Curve-billed Thrasher—and heard a steady chorus of Western Meadowlarks, but no sparrows.

I headed south on DeGroot Road to look for a Burrowing Owl that was seen there a couple days ago. I’d only gone about a quarter mile off Hanover Road when I heard a Cassin’s Sparrow. 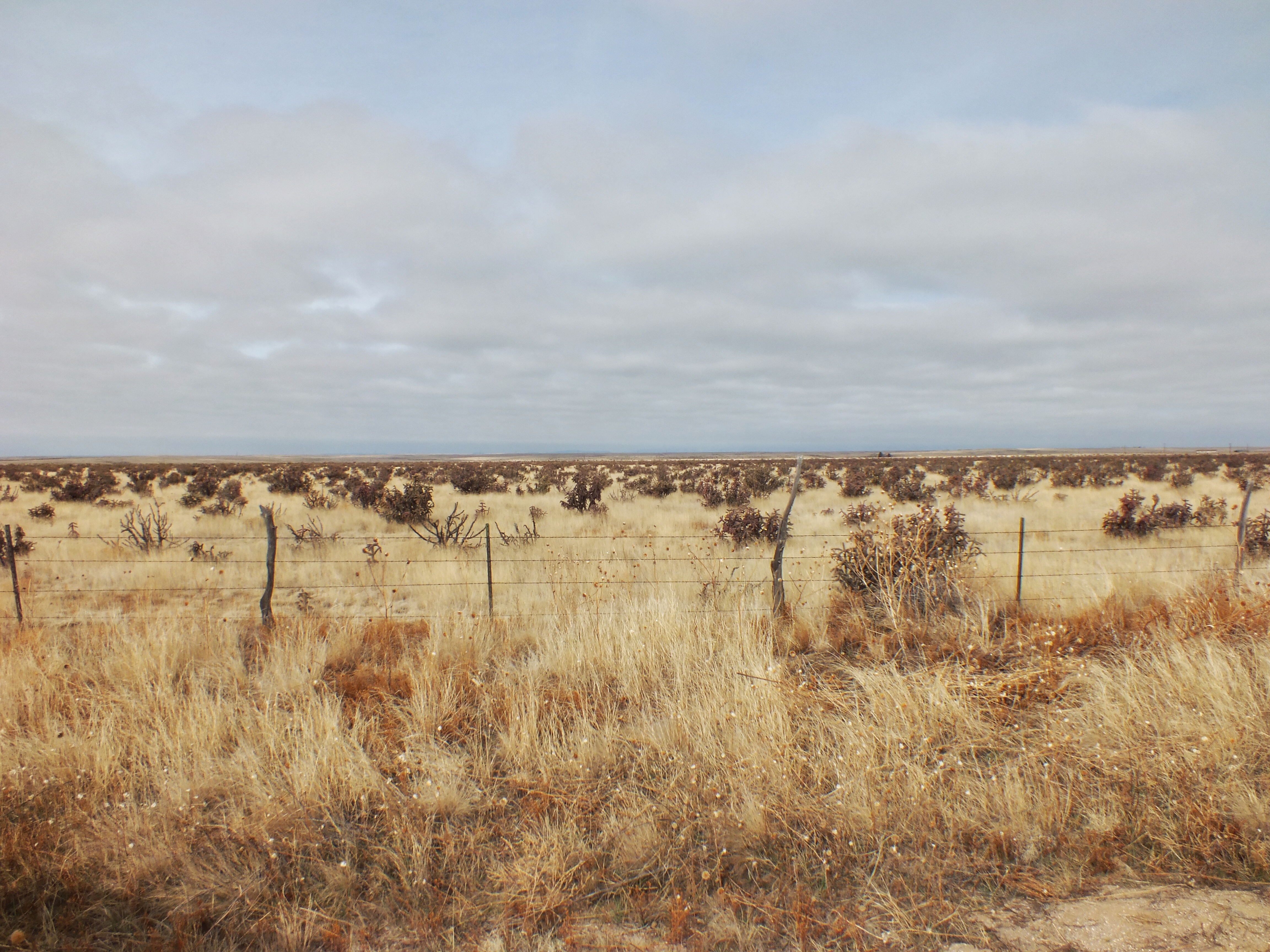 It was beyond the fence a ways. After looking in vain for several minutes to see if I could see it skylarking (which the guides say the species does), I resorted to a recording of the bird on my phone.

Within seconds, the bird landed on a cholla just beyond the fence. 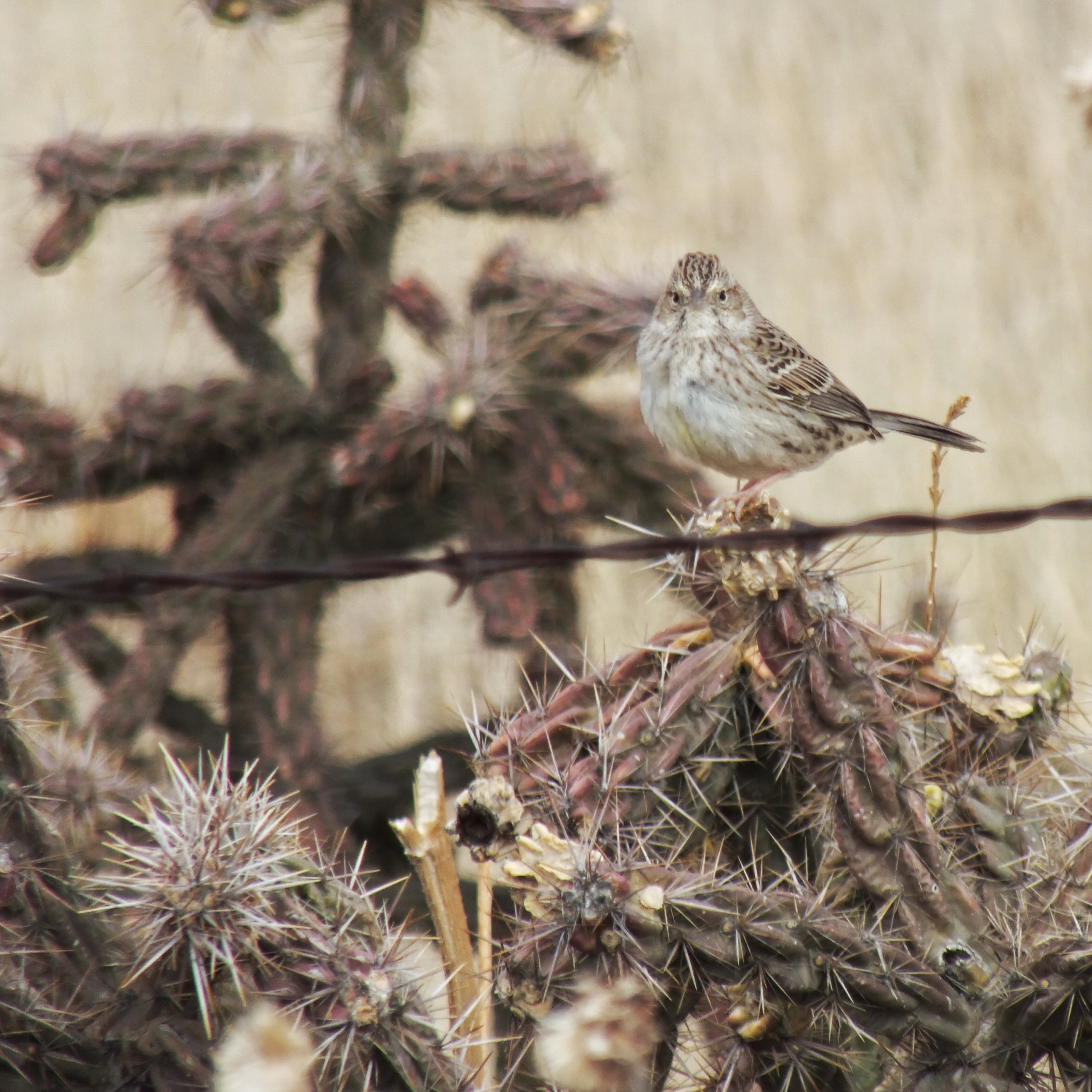 It flew back and forth to different perches for the 10 minutes I was there, and often sang while perched on the fence itself. 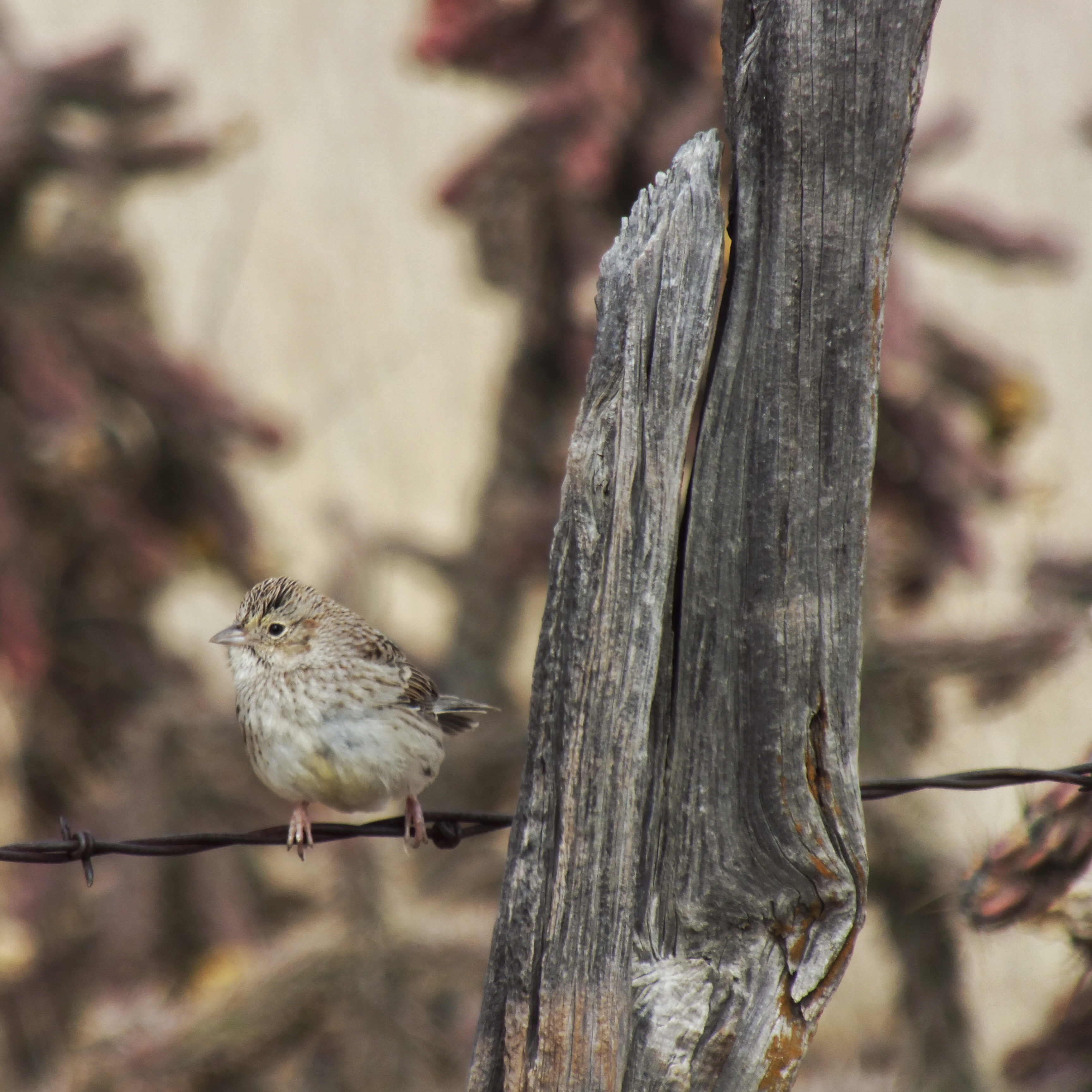 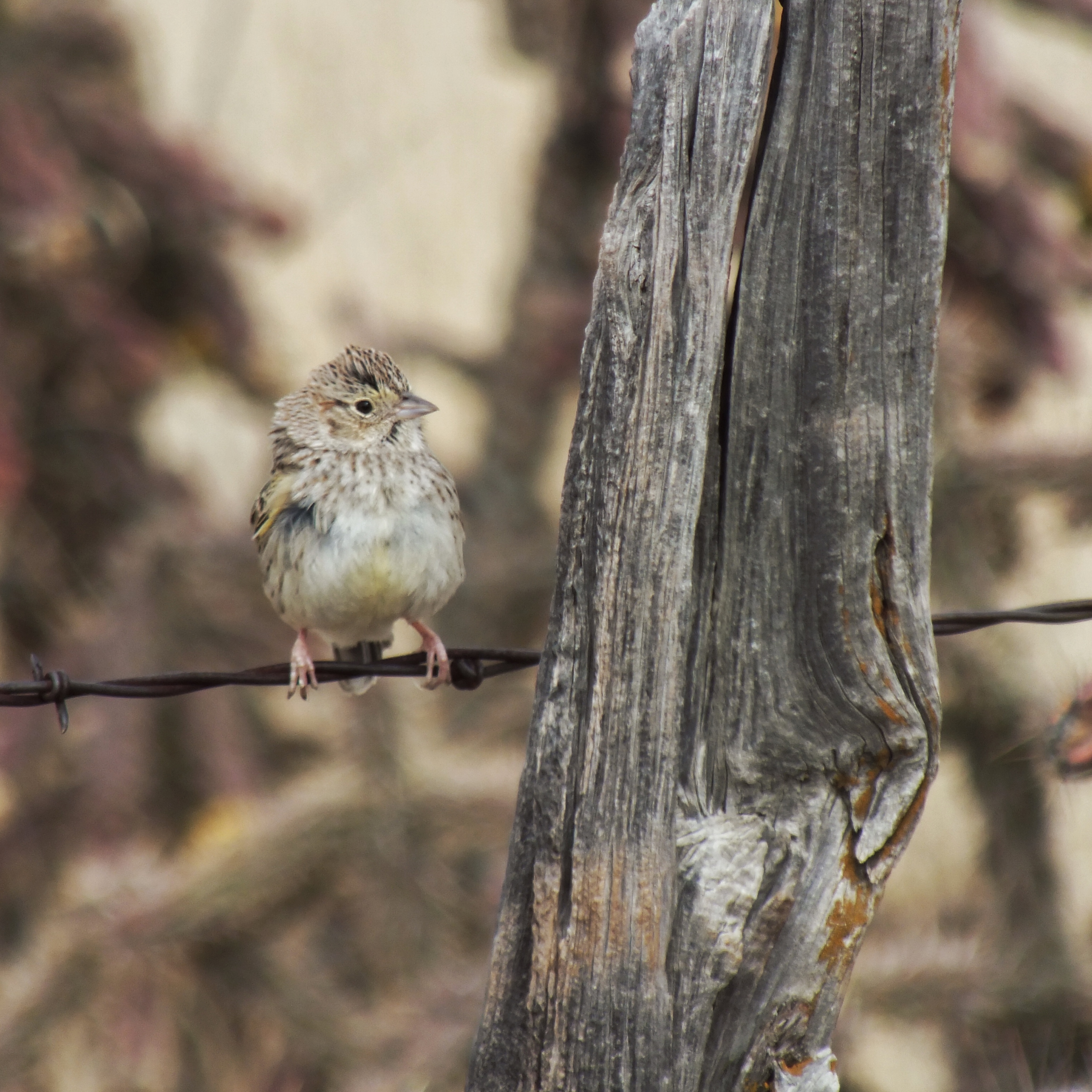 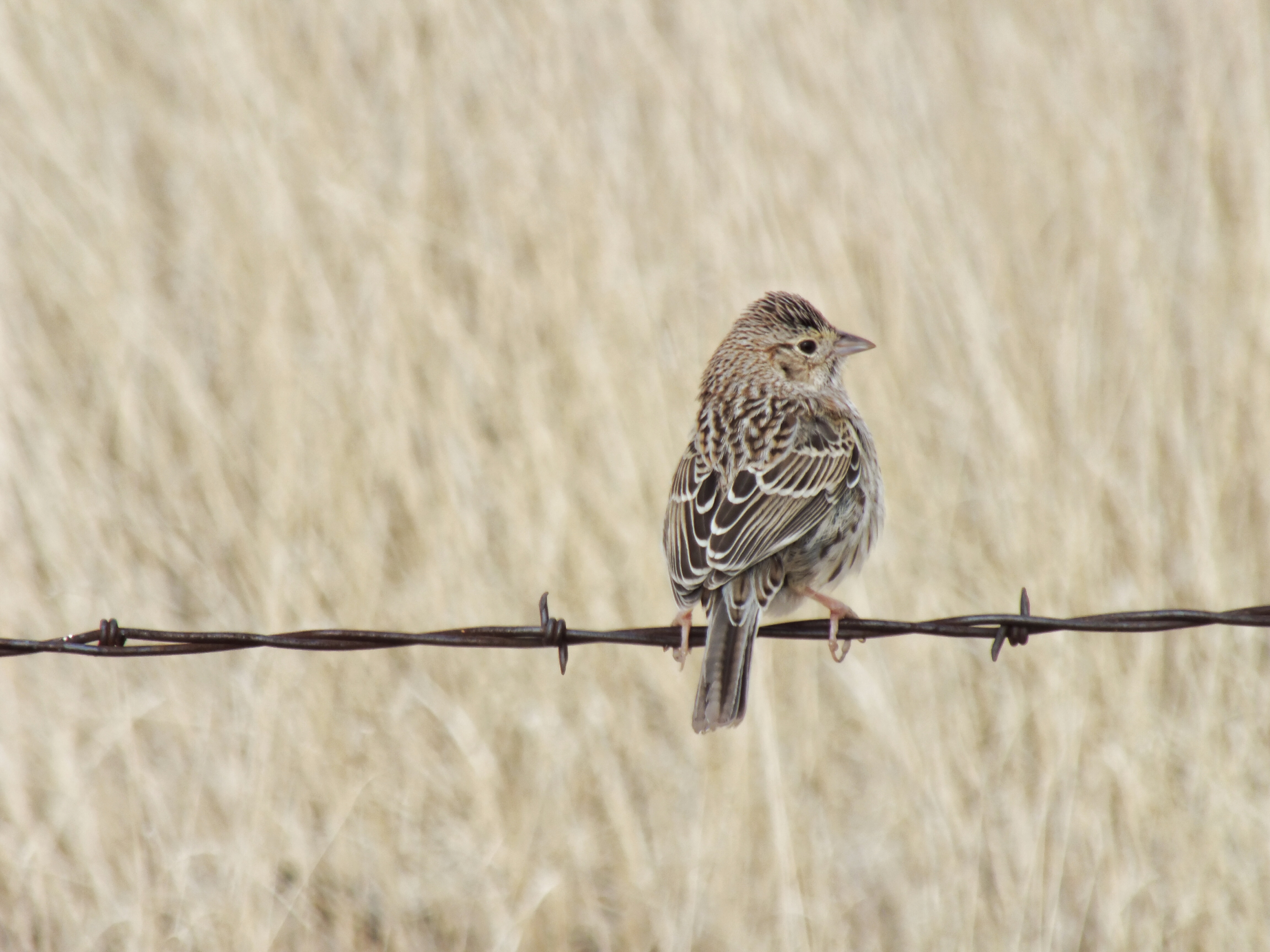 At one point it flew down to the ground and walked about in the grass. It then flew up right toward me and only banked when it got about two feet away. It landed on the road next to my car and looked for the singing “sparrow.” I didn’t want to disturb it anymore, so I quit playing its song after a couple minutes. It flew back to the fence and sang six or seven times before flying off.

It wasn’t an overly-exciting bird to look at, but I sure got good looks. The photo above shows the speckled back that is its most distinguishing feature.