After visiting Old Fort Niagara and the Theodore Roosevelt Inaugural National Historic Site, we headed for the Memorial Auditorium where we were to see a Buffalo Sabres NHL game. We were two hours early, but that was OK because, right next door to the auditorium was this park, complete with three ships to tour. 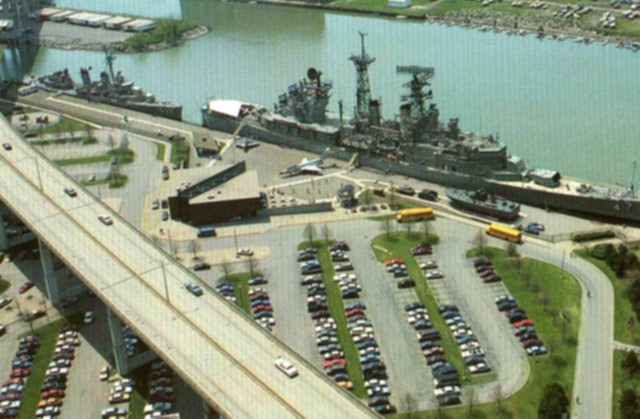 We paid our $6.00 and started with the WWII submarine, the USS Croaker. We walked along the top before entering through the forward hatch. The inside was very cramped and narrow. In most rooms, I couldn’t stand up. The captain’s cabin was about the size of a refrigerator, the crew slept wherever they could find room, including among the torpedoes. The hatches were the size of a washing machine door. One passage was so narrow, It felt crowded with just two aboard. I couldn’t imagine being underwater in the thing with the standard crew of 74 men and seven officers. 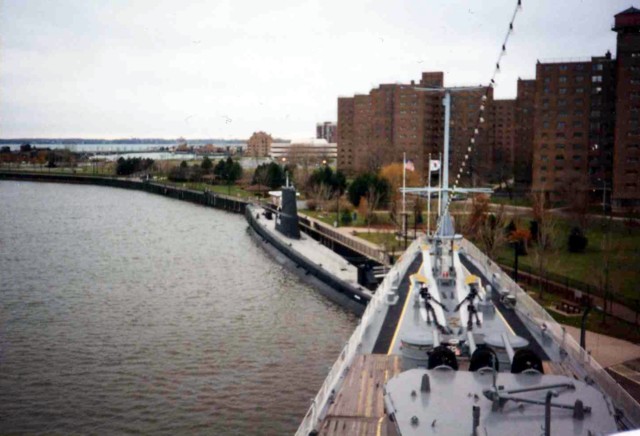 We then toured the USS Little Rock, a guided missile cruiser. (That’s the Croaker in the photo above, from the deck of the Little Rock.) This was a big, big boat. It carried a crew of 1,100 plus 150 officers and 150 marines. The self-guided tour followed a yellow line painted on the deck that went in and out of cabins, radar rooms and the bridge, up ladderways and down ladderways — never backtracking. And we still probably missed half the ship. We took our time and found it fascinating and fun. For most of the time, we had it to ourselves, but near the end of our tour a large group of kids showed up with all sorts of gear to sleep onboard overnight. How fun.

From the USS Little Rock, we went to the last ship, the USS Sullivans, a WWII destroyer named for the five brothers who were all killed on the USS Juneau. The ship seemed small next to the Little Rock (the crew was 290 men, 20 officers). We followed a yellow line again, but had to make our way through crowds of kids who were moving in to spend the night.