This butterfly competes with the Giant Swallowtail as my favorite so far.

I had been seeing them all morning, wherever there were trees and bushes, but I hadn’t gotten a good-enough look. I was looking at a Giant Swallowtail in the woods along the old channel when I saw several of these in and about the same thicket.

Later I saw twenty or so sitting on the mud next to the boat landing on Lodge Lake in the refuge. There was a Giant Swallowtail and what was probably a Black Swallowtail with them. They sat tight when I bent over to take pictures and some of them stayed even when I waved my foot inches above them.

A smaller butterfly, perhaps a Painted Lady kept hovering in the area and often tried to land on the teal area of the upper wing when a Pipevine Swallowtail would open its wings. On two occasions, this smaller butterfly actually landed and perched for several seconds on a larger butterfly. 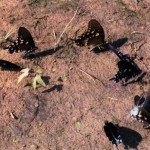 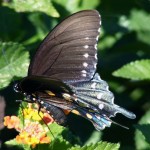 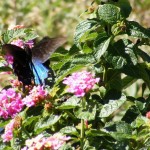