Back when I first began to identify butterflies, I gave up on the Skippers. There are dozens of species that all look very much alike and it was too frustrating to chase them about and try to see the distinguishing marks through my binoculars. But now that I do most of my butterfly observing with my camera, I can compare the photos with the field guide illustrations at my leisure.

That’s how I know this is a Tawny-edge Skipper. (I have a photograph of the underside of the wing that is good enough to show the identifying marks, but isn’t good enough to post.) You can see how tiny it is by the size of the clover flower it’s on. There were several dozen of them zipping low over the grass on the mown horse trail. They often chased each other and a much-larger Painted Lady butterfly that was in the area. 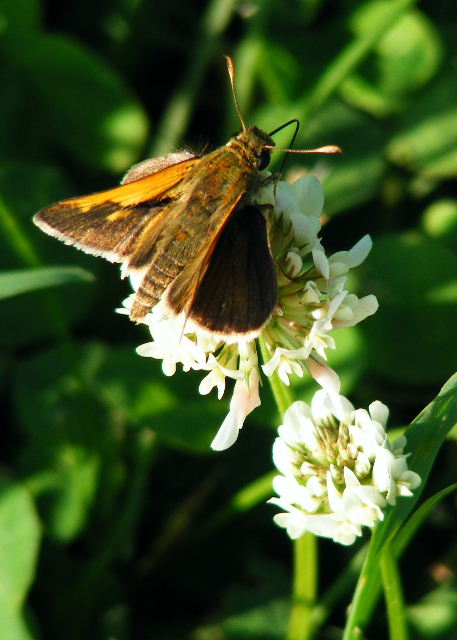 Skippers make up a very large worldwide group of mostly small and confusing creatures. Roughly one-third of all the butterfly species in North America belong to this family. Sometimes regarded as distinct from true butterflies, they differ in having the club of the antenna bent, with a narrow extension in most species, and in details of wing veins. Most skippers have stout bodies, wide heads, and relatively small wings, and many of them are very fast flyers.

Grass Skippers tend to be smaller … and are patterned with orange or yellow. They do not sit with the wings spread open flat, but instead have a characteristic posture — sometimes called the “jet-plane position” — in which the hindwings are opened farther than the forewings. Males of many grass skippers [including the Tawny-edged Skipper] have a patch of specialized scent scales, called the stigma, on the upperside of the forewing [It’s that dark black diagonal slash that ends by the small orange rectangle]. — Butterflies of North America, by Jim P. Brock and Kenn Kaufman