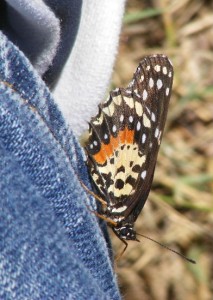 The butterflies have mostly disappeared in northern Illinois by this time of the fall, but not in Texas. Without question, I saw more butterflies of more species in four days than I had all year up north. When we walked over to Johnson’s birthplace, we saw a constant parade of Pipevine Swallowtails. Pipevines are stunningly beautiful and I was hoping to get a good photograph of one, so I was paying attention whenever a butterfly was nearby.

A few minutes later, when we got out of the car to look at Johnson’s grandfather’s house, I saw an incredible butterfly flit by — black and white with dark red patches on its wings. I said to my sister, “I just saw an amazing butterfly. I hope it lands.” As if on cue, it landed — on the cuff of my pants.

I took some pictures, but it was rather hard to get a good angle. After a couple minutes, when the butterfly seemed disinclined to leave, I reached down with my finger and coaxed it to climb aboard. To my surprise, it did. 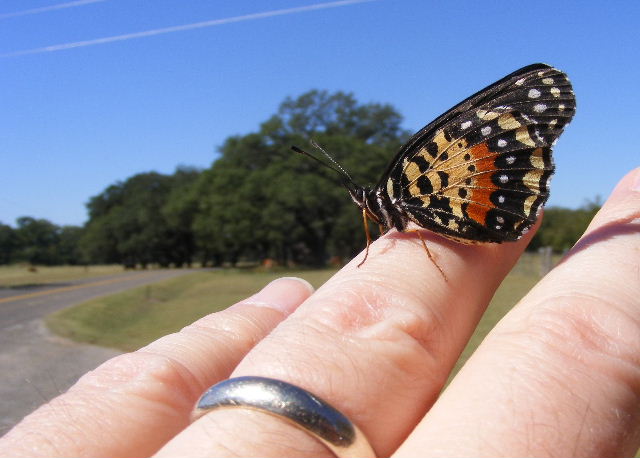 We took some more photos. I kept moving my hand around to get different angles. The butterfly was active, crawling around on my fingers, but didn’t leave no matter what I did.

I wanted to get a photo of the upper wings, so I gently prodded it with my other hand. It opened its wings briefly, but not long enough for me to get a picture. I kept doing it until I finally got this shot. 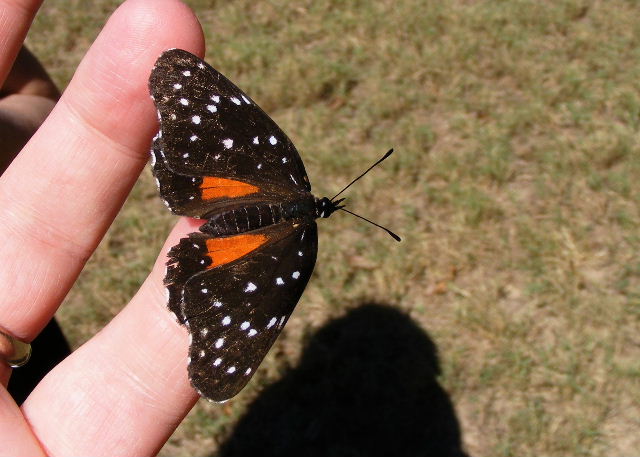 You can see the shadow of my sister taking a photo with her camera. I kept telling her to go get her own butterfly, but she kept shooting pictures of mine, like this one … 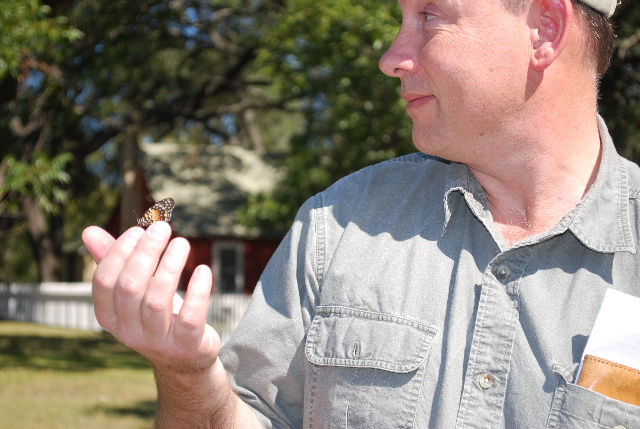 The cool thing about the Crimson Patch is, not only is it beautiful, but it can only be seen in south Texas. And even there, my field guide says, it’s local and uncommon.

After a few more minutes, I leaned over to let it go on the ground. It too realized the time had come and flew off.