I was taking a walk around the McHenry Dam trail. As I walked down the steps to the blind, a butterfly flew up from the steps and disappeared into the woods. I only saw that it was orange and black. When I left the blind a few minutes later, I saw it again flitting along the trail. After a few brief stops on the trail, it landed on the side of a tall tree at eye-height.

I looked at it through my binoculars, then went around the other side of the tree and slowly looked around the edge, getting within six inches. It had its wings folded most of the time, but occasionally opened them wide.

It was smaller than I expected, but not as small as a Cabbage White. The upperside was orange with black spots on the forewing and mostly black on the hindwing. The underside was brown, patterned like a leaf. It had a tiny silver hook on the hindwing. 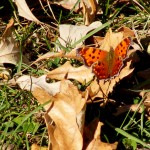 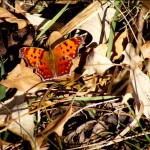