I was walking the Lake Defiance Trail near Junction A west of the lake. The Question Marks were landing on the gravel path and flying over the marsh grasses along the trail. I was able to get within three feet or so.

They were larger than the Eastern Comma, but not quite as large as a Monarch. The uppersides were beautiful — this may be my favorite butterfly so far. The forewing was brilliant orange with black spots. The hindwing was mostly black. The undersides were brown, patterned like a leaf much like the Eastern Comma. It had a silver curve on the hindwing, but it was thicker than the curve on the Comma. Near the base of the curve, there was a small silver dot. 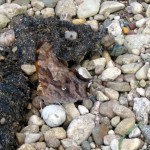 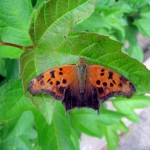