Way back in the spring, the Cubs announced that the first night game at Wrigley Field would take place sometime during the 1988 season. There was speculation that it would happen on a Monday night when there would be a national TV audience. My friend and I decided to buy tickets to the likely Monday games and see what happened.

I heard that people were paying $1,000 for tickets to the game, but nobody offered me anything.

The day of the game, the TV, the radio, the newspapers and everyone we talked to gave us dire warnings about how difficult it would be to find a parking place within ninety miles of the Wrigley Field. So we determined to park 91 miles away (actually, it was about four miles) and take the Irving Park bus to the game. We found a spot in front of the apartment of a coworker.  We hopped a bus and got dropped off about five blocks from the park.

We arrived at Wrigley Field around 3:00, an hour and a half before the gate opened.  We ate lunch at Yum-Yum Donuts and walked around the park looking at people. The area was crawling with people waiting to get in and vendors selling everything from “Let There Be Light” T-shirts to posters showing the park lit up with flashlights. 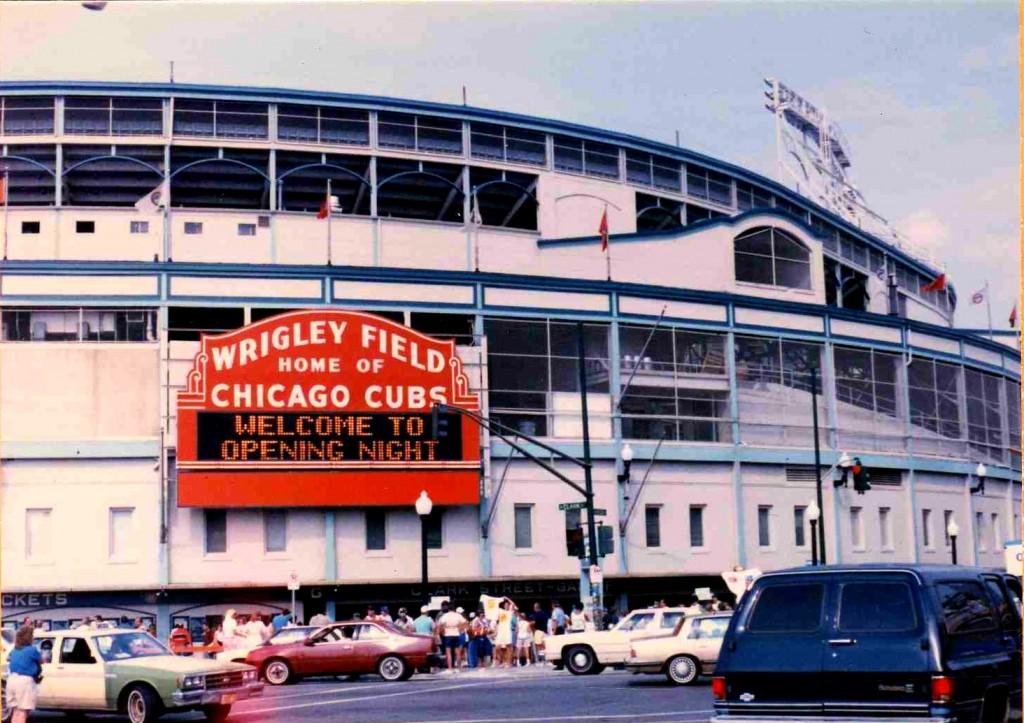 While we waited, I saw Phil Regan walking past. I had known Phil years before when he pitched for the Cubs. We finally got inside. It was a zoo there too. The Cubs were taking batting practice surrounded by a vast mob of reporters and cameramen. 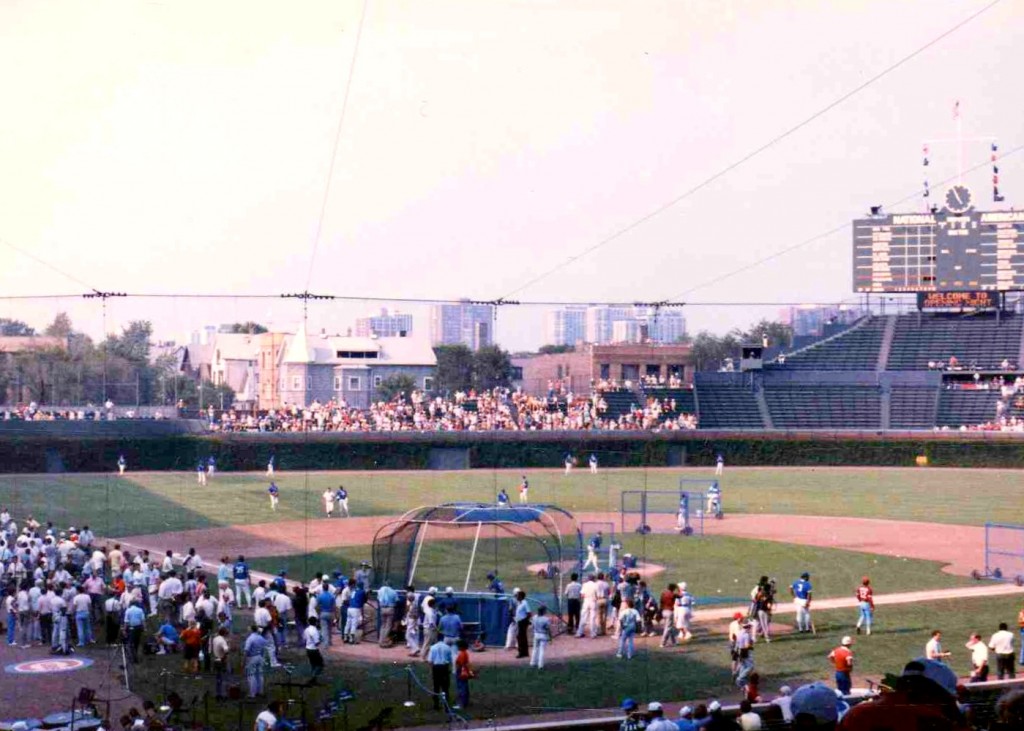 Our seats were on the lower level, back under the press box. I saw Phil Regan sitting down below, close behind home plate. I walked down and said hello. He looked at me as though expecting me to ask for an autograph, but as soon as I introduced myself, he was totally friendly. We chatted for perhaps 15 minutes. He was working as an advance scout for the Dodgers and just happened to be there for the first night game.

Finally it came time to turn on the lights. A 91 year-old Cubs fan named Harry Grossman pushed the button. 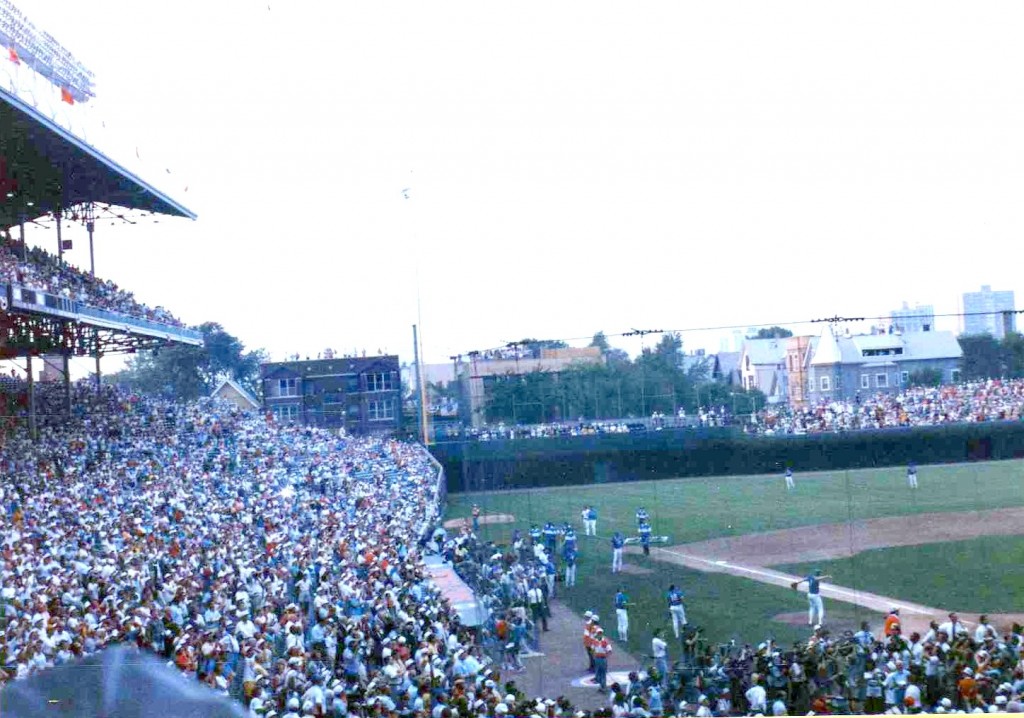 There was a fanfare and a countdown and then … nothing happened. It was still light out and the fixtures took a while to warm up. It was several minutes before we could even tell they were working.

It was still 91 degrees at game time. Phil Bradley, of the Phillies led off the game by hitting Rick Sutcliffe’s first pitch for a home run (below). 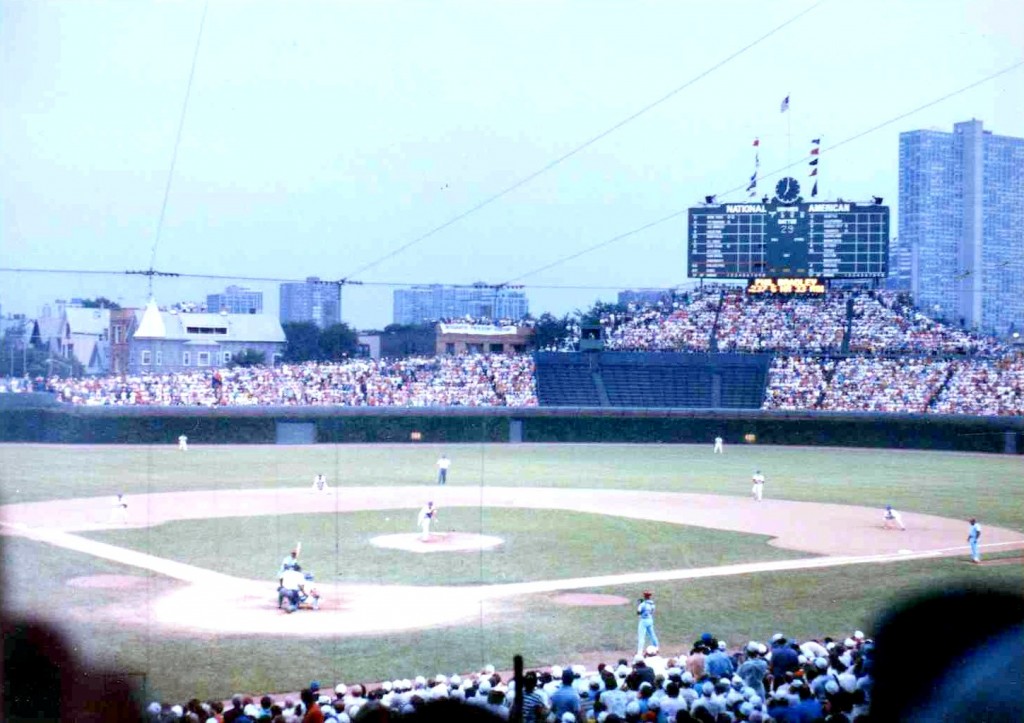 In the bottom of the first, Mitch Webster led off with a single, then Ryne Sandberg hit a home run to put the Cubs in front. In the panoramic view, Sandberg can be seen crossing the plate after his home run in the center. On the left, he’s tipping his cap in front of the Cubs dugout. On the right, before he hit the home run, he’s watching as ushers escort Morganna the kissing bandit off the field after she ran out and tried to kiss him.

In the picture below, taken during the third inning, Andre Dawson just grounded to Mike Schmidt at third. Sandburg is the runner. 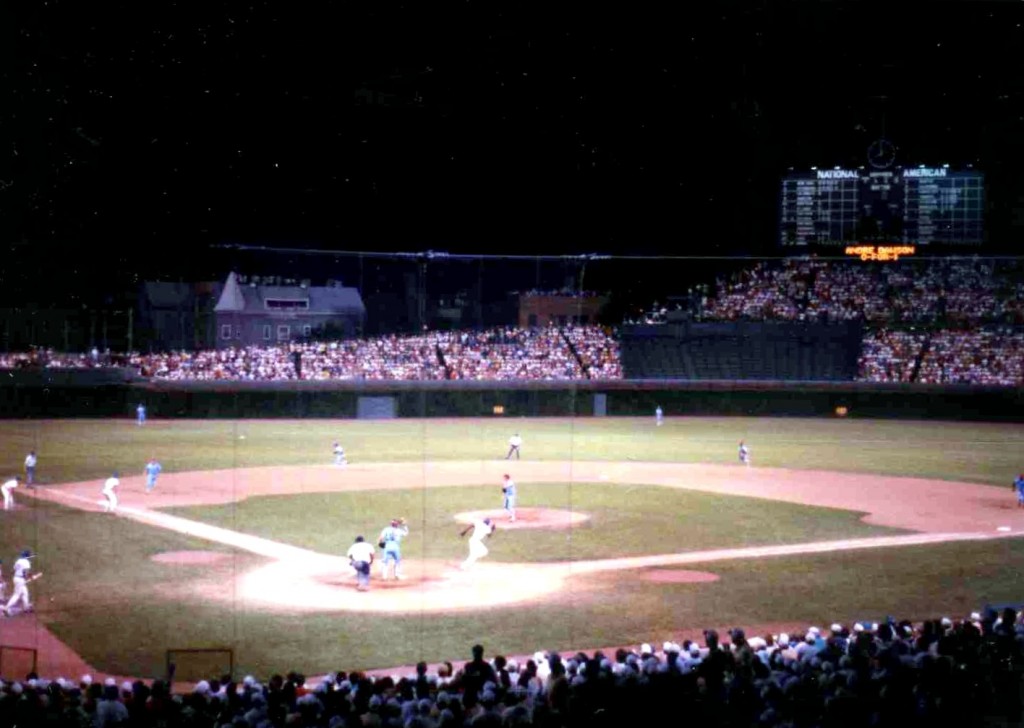 The Cubs were leading 3-1 in the fourth when it began raining hard. It happened that 1988 was the driest year in history. It hadn’t rained in forever. Just the Cubs’ luck. 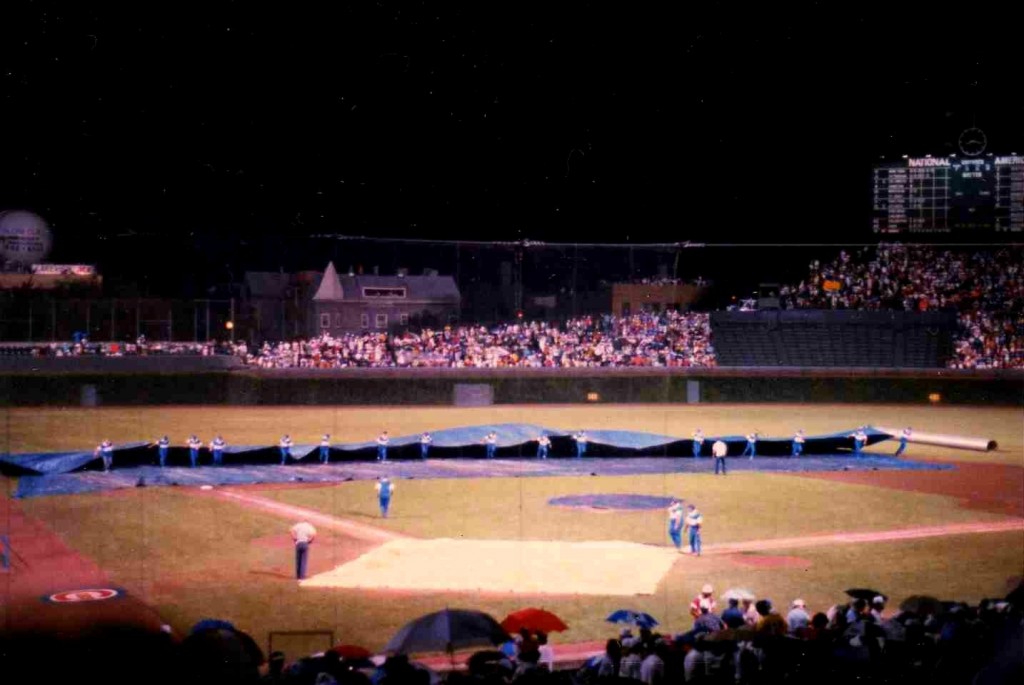 Two hours and 25 minutes later, the game was called. We had spent the intervening time in our seats laughing at other fans. It was still raining hard as we walked to the bus stop and I got as wet as I’ve ever been. The bus was waiting. We jumped on and rode back to the car. I got home around 11:45 pm. 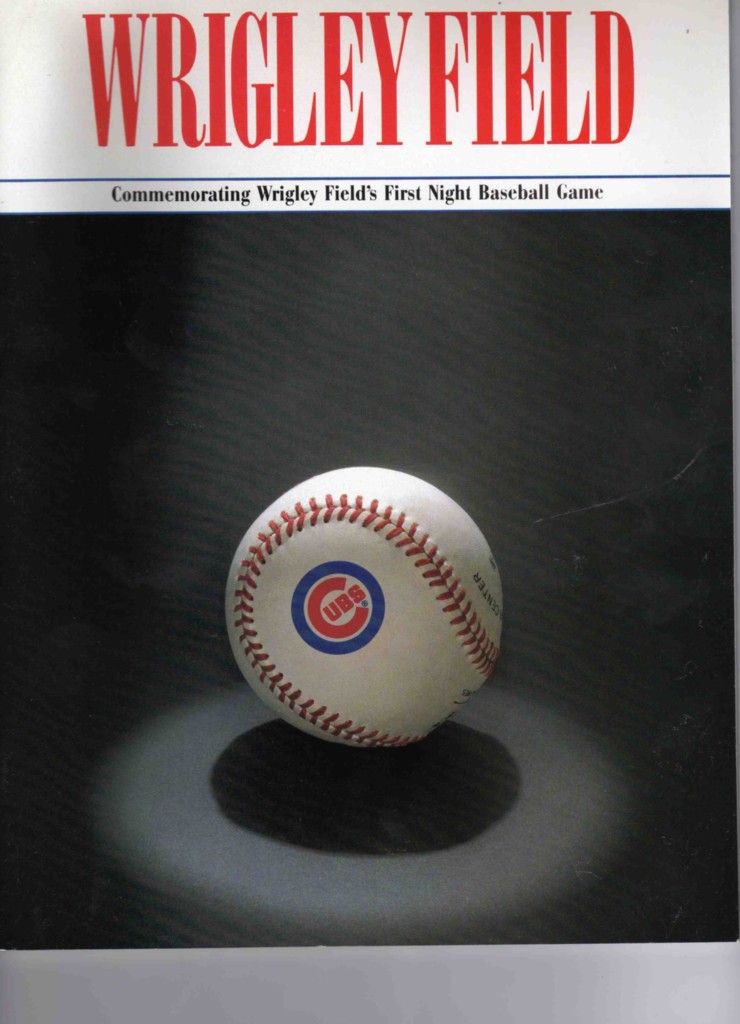 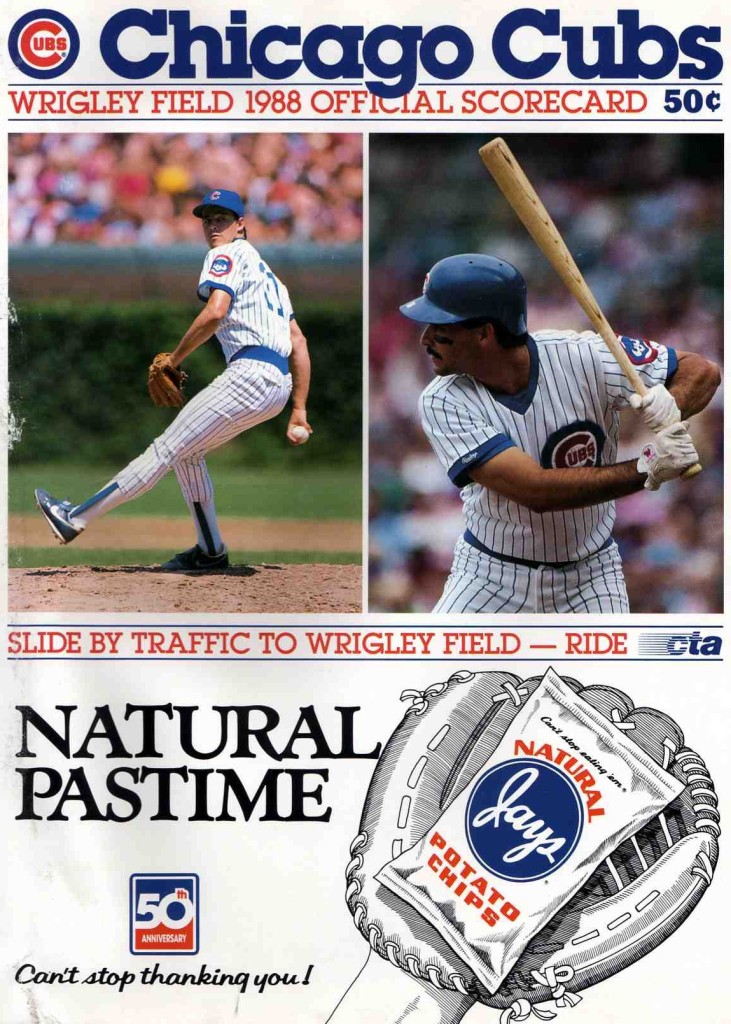 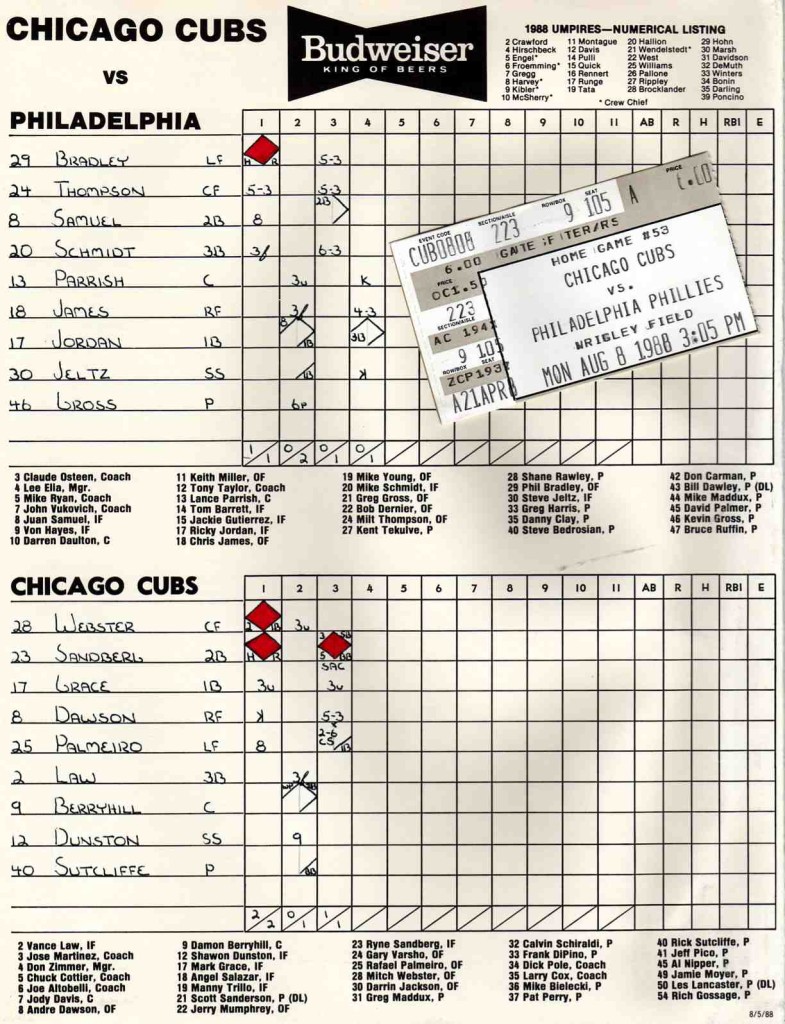