In mid-January, I spent five days in Orlando with a group of coworkers manning a booth at the Children’s Pastors’ Conference. We were kept busy from early in the morning to late at night and didn’t have much time to see the sights — except on Thursday when the exhibit hall closed mid-afternoon, and that’s when we went to Epcot.

I went to Disneyland in California when I was six or so — all I remember is a submarine ride. So when I heard that my sister and three of our friends were heading to Epcot, I invited myself along. One of those friends, Michayla, is the world’s foremost Disney enthusiast. She’d actually been to the park two weeks earlier with her husband. And not only was she willing to make all the arrangements, she acted as our guide. In six hours, we saw the vast majority of things there were to see.

Let me say up front that paying $66 to tour an amusement park is not how I generally vacation. And while I’m very glad I did it once, I’m not sure I’ll ever go back. So with that in mind, I will attempt to cover our visit in detail so, should the urge hit me, I can revisit this post and save the money.

Immediately in front of me as I entered was the giant silver golf ball, which was about all I knew about Epcot before this visit. 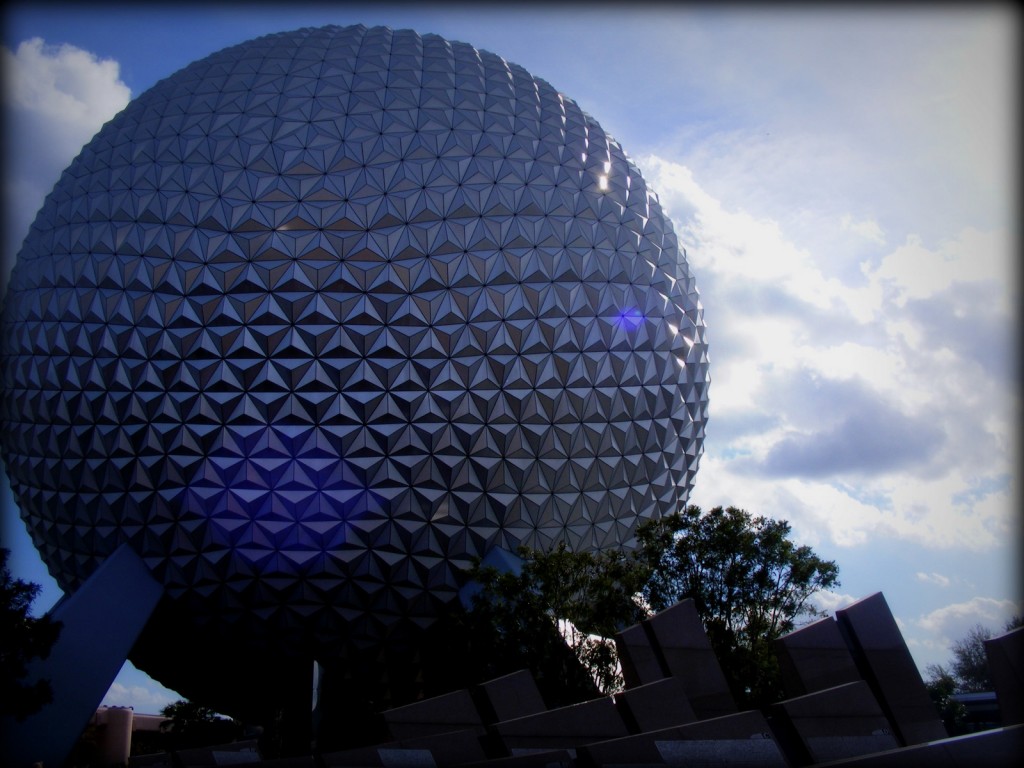 It houses a ride called Spaceship Earth which attempts to show the planet as a time machine, but I must confess I didn’t really get it. We rode past many scenes featuring animatronics portraying advances in human communication. They were very impressively done. 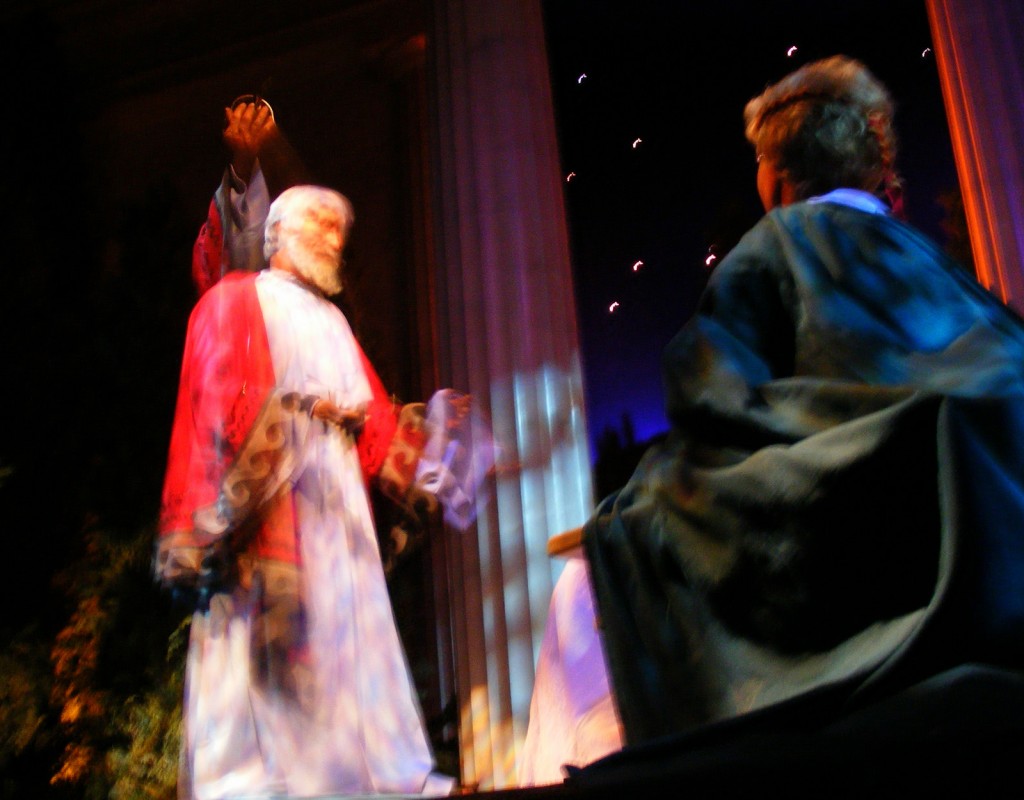 Our next stop was The Land building where we hopped right on a boat ride — called Living with the Land — that took us through greenhouses, experimental gardens and fish farms. It wasn’t a very popular attraction with tourists, but I thought it was one of the best parts of our visit. It was also the part where I took the most photographs because it was outdoors and my camera takes lousy indoor photos.

Margaret and Linda looking at the land. 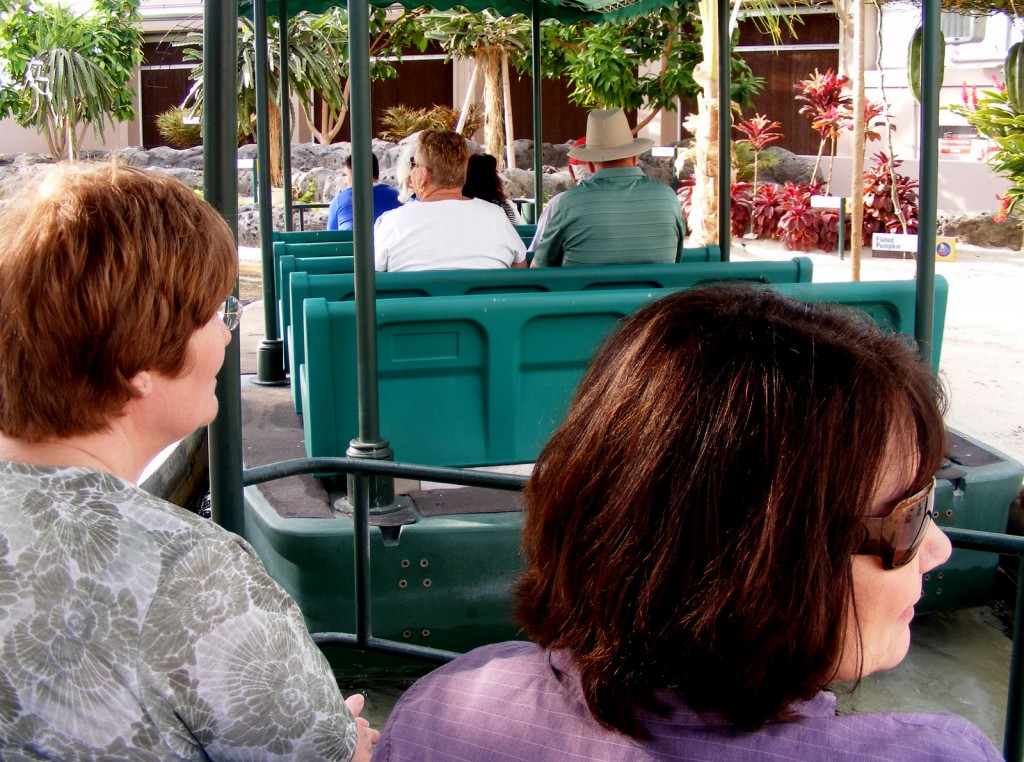 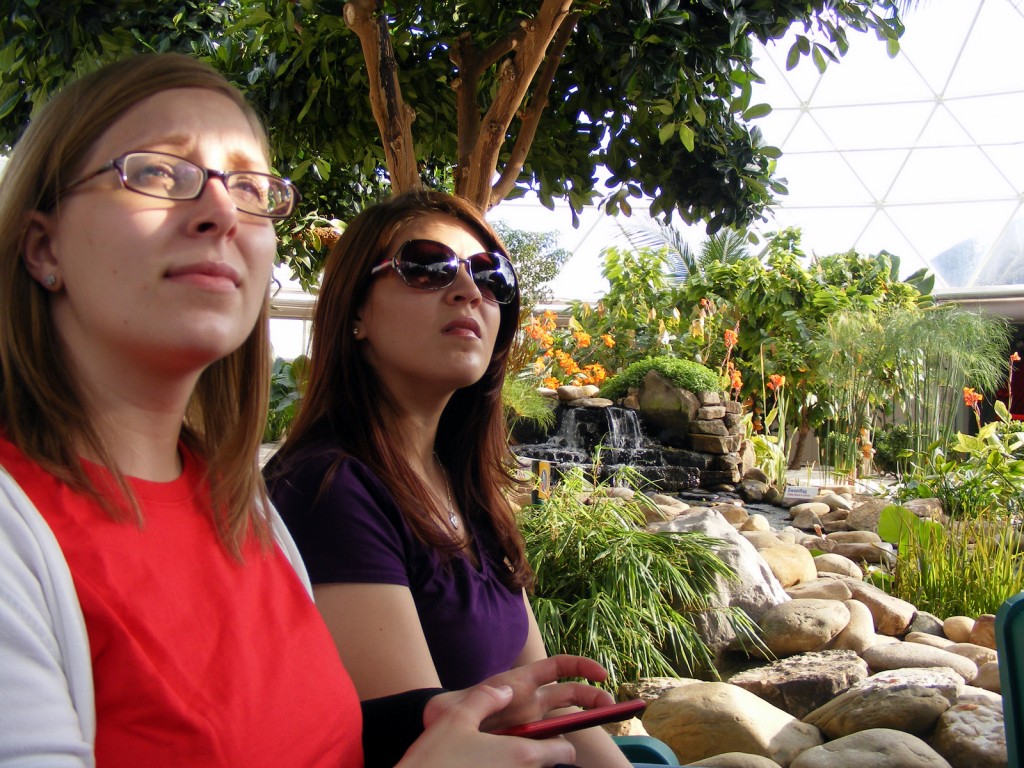 The fish farm. There are alligators in the tank on the right. 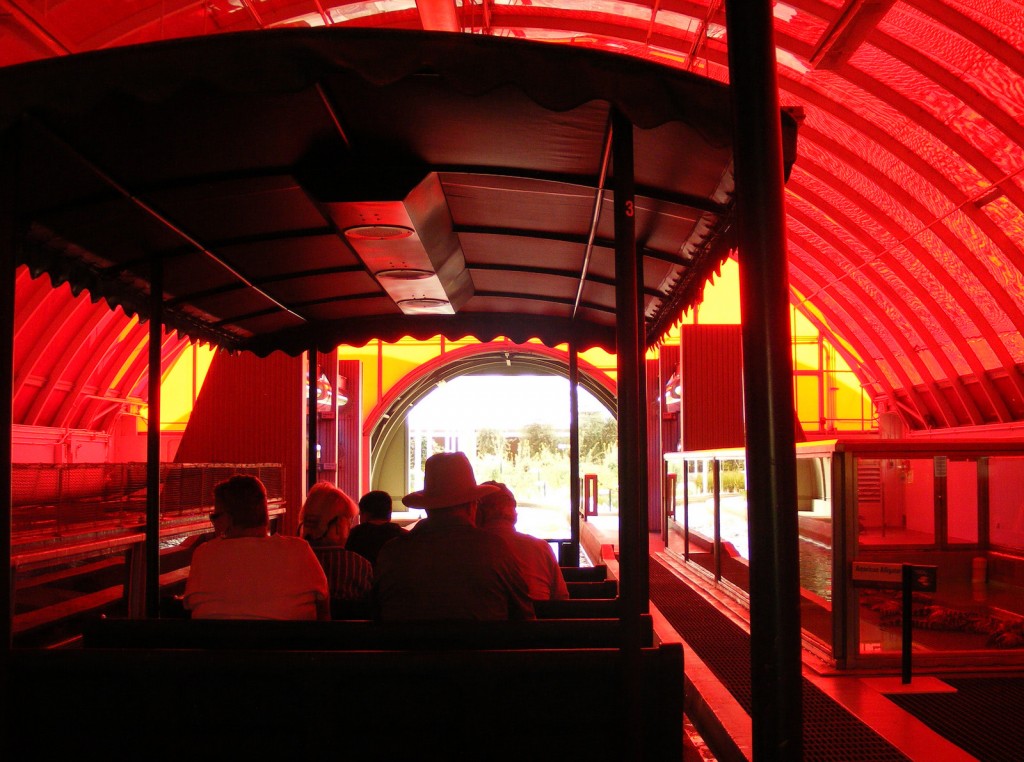 Part of the experimental gardens. 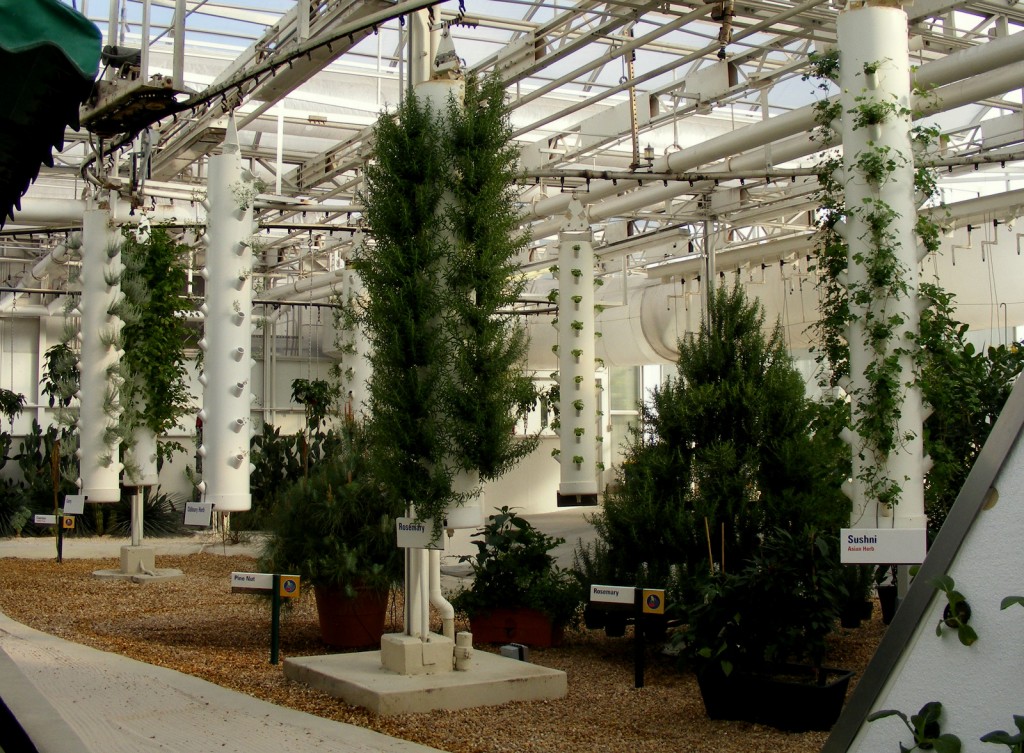 In the Imagination! building, we took a ride called “Journey Into Imagination With Figment.” Eric Idle and a purple dinosaur attempted to convince us to use our imaginations. Perhaps I’m not susceptible to purple dinosaurs — I was never a fan of Barney’s either — but I found this underwhelming.

My sister “laughing and learning” in the ImageWorks play area at the end of the ride. 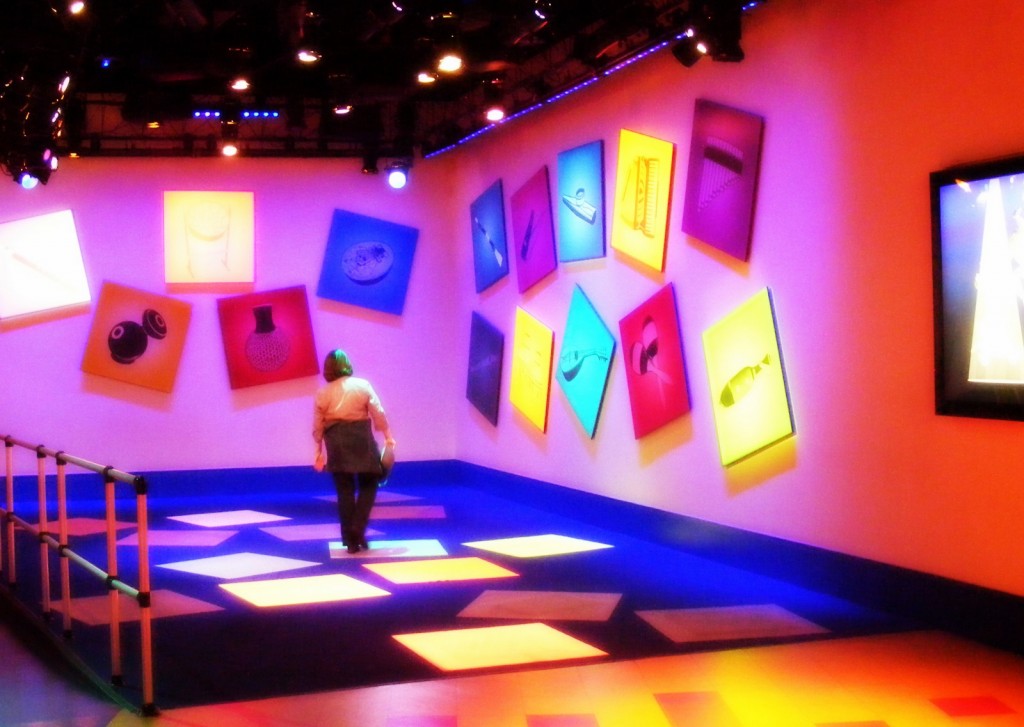 Margaret, Julie and Michayla attempted to splash me in one of the funky fountains outside the building. 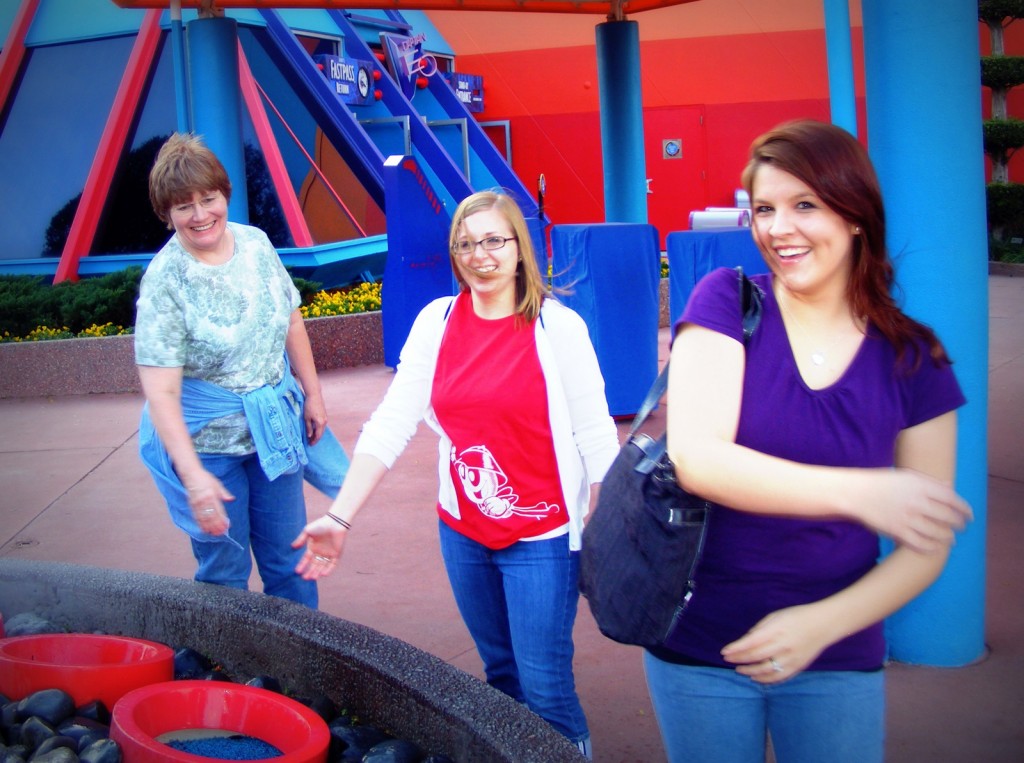