Fenway Park? Sure. I saw a rain delay there once.

When our trip to New England was first planned, back in January, I ordered two tickets to a Red Sox/Blue Jays game at Fenway Park. But when it came time to leave the hotel and drive to the park, my wife decided not to go. It was cold and raining hard, and I didn’t blame her a bit. I left at 4:00, in my parents’ car. I made it the first 12 miles, to downtown Charleston, then got stuck in a traffic jam. It took me two hours to go the next five miles. I was listening to a local sports station and expecting to hear that the game had been called.

I wasn’t sure of where I was going, and was very happy when I finally saw the park glowing in the evening. But I soon discovered there was no exit nearby. I pulled off about a mile further on, and found myself on a second expressway going back the way I came, right past the park again. I pulled off again and saw a parking lot that advertised ball game parking. I was in a hurry because it was already game time. I pulled in, paid my $5, and took off running for the park — even though I wasn’t sure where it was. After some wrong turns, I finally found it about two miles from where I’d parked. It was raining the entire time, and I was drenched. I circled the outside of the park, taking photos, then went inside. 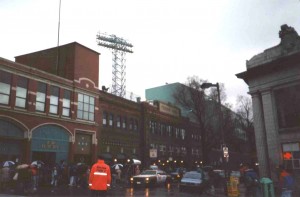 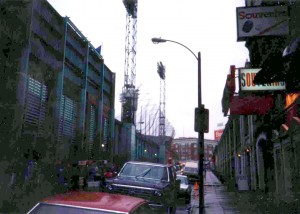 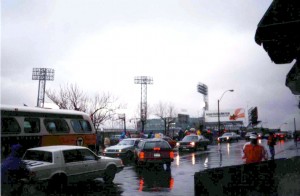 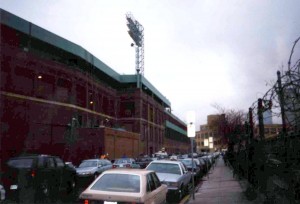 The back of the Green Monster 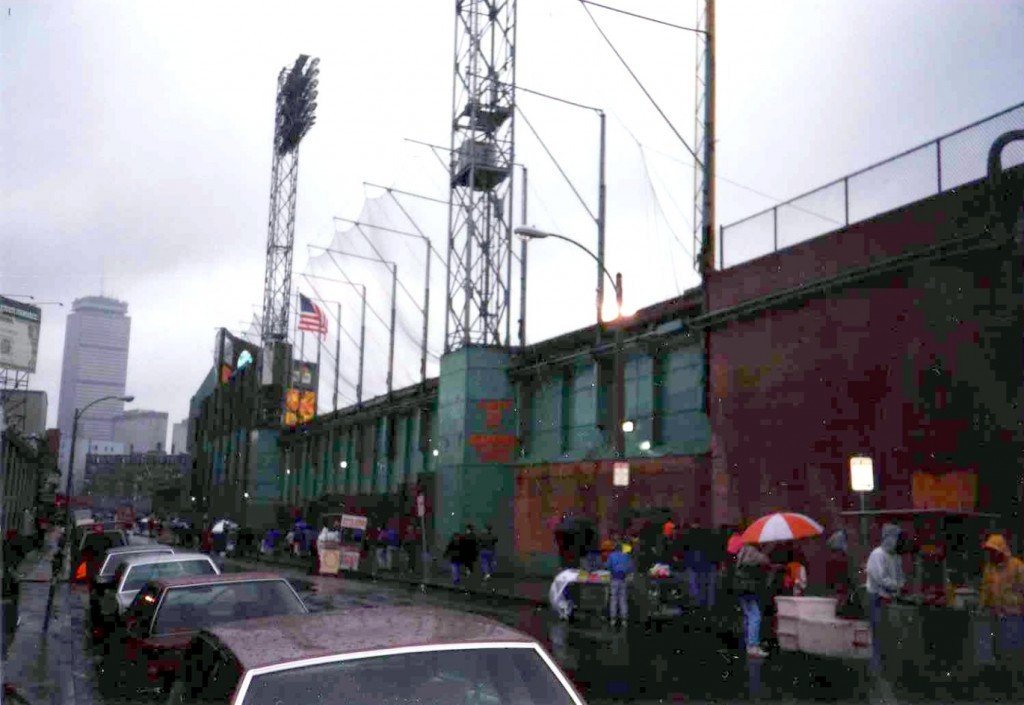 The tarp was on the field and the crowd was under shelter. I wandered around inside, taking photos from every angle. The video of Roger Clemens’ 20-strike-out game was showing on the scoreboard. 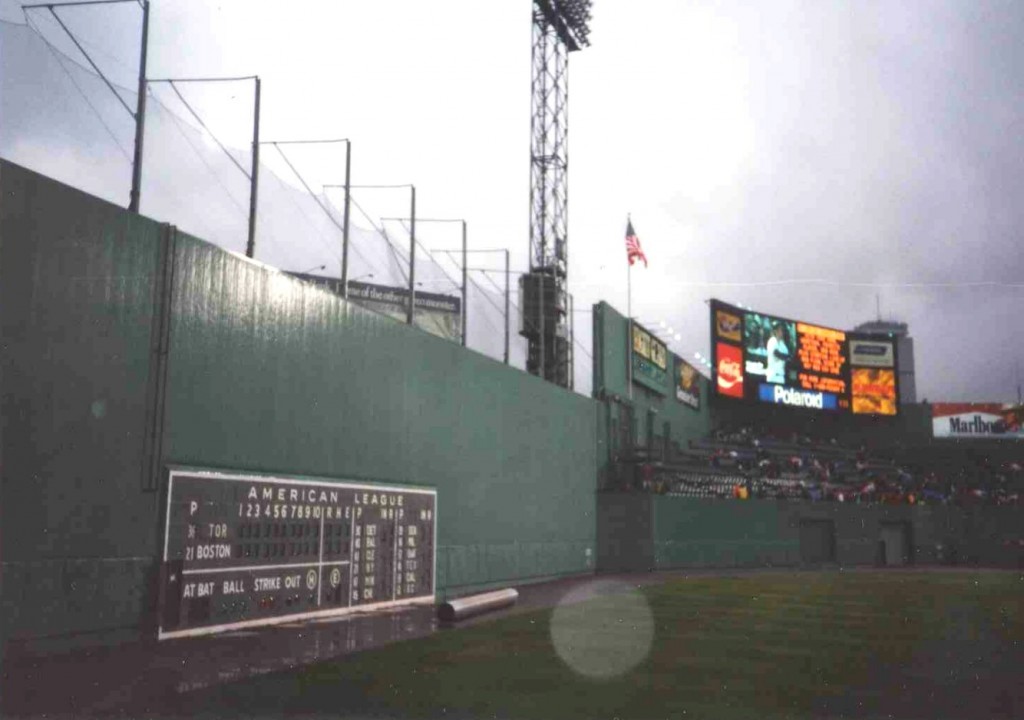 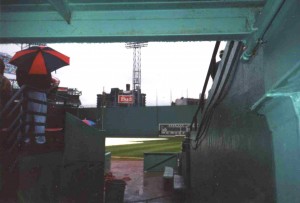 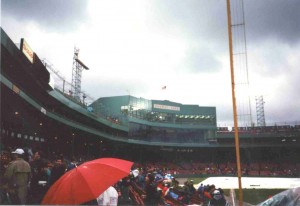 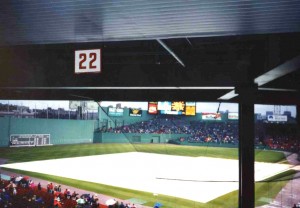 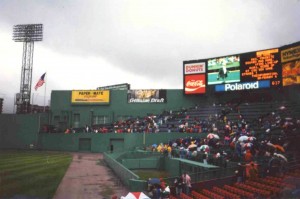 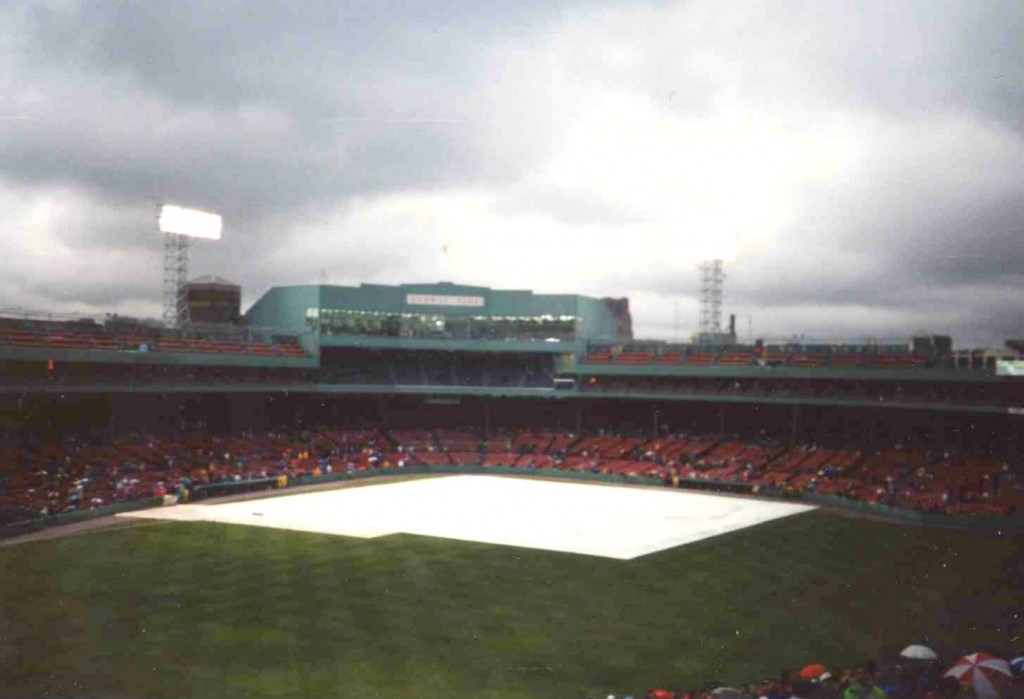 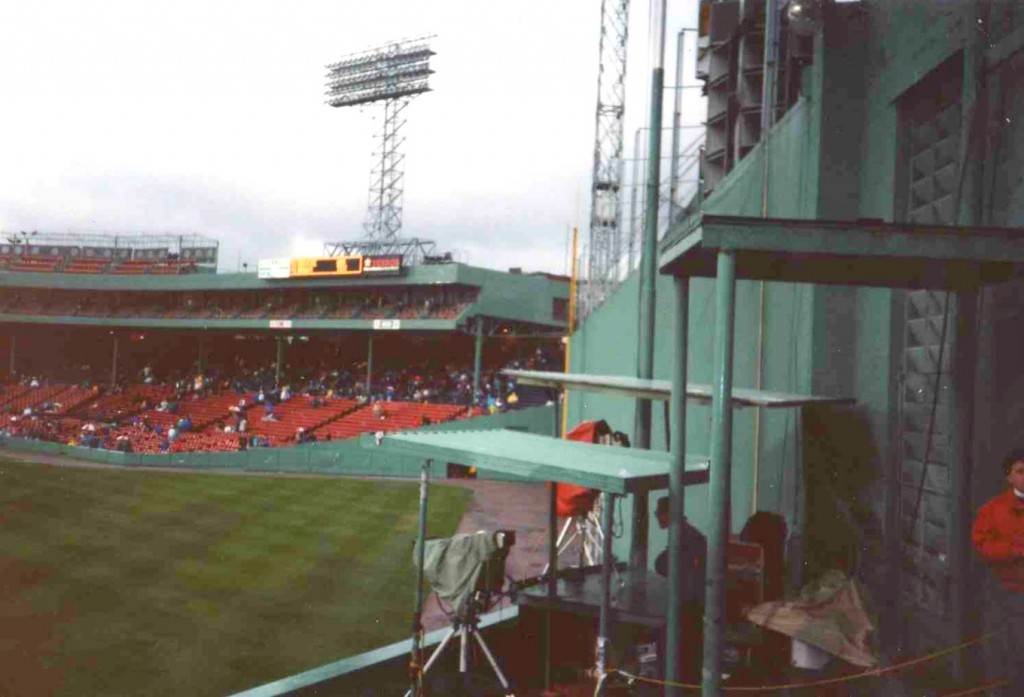 After an hour and a half of this, I began pondering the situation: it was still raining hard; I was cold (38 degrees) and wet; I’d seen the park; my car, if I could find it, was two miles away; I didn’t fancy wandering around a strange city late at night; I had no idea how to get back on the expressway; and I couldn’t remember the name of the hotel. Even if the tarp was removed immediately, the game wouldn’t have ended until after 11:00 at best. I very much wanted to see a game at Fenway Park, but I had serious doubts whether there would be one there on this day. Then I happened upon a park employee who was closing up his concession stand and explaining to another employee that the game had been called. I gave up.

I’d never even found my seat. It would have been a good one — just beyond the right-field foul pole, about 10 seats up from the field.

I found my car without incident and miraculously, almost immediately, happened upon a road I recognized from the map. It took me to the expressway, and I headed back to the hotel. Traffic had cleared and I made it without incident. I got back to our room just as the game began — yes, there was a game. It began at 8:30, two-and-a-half hours late. After four innings, it began raining again, halting the game. It was finally completed, but if I had stayed until the end, I wouldn’t have gotten back to the hotel until 1:30 the next morning. To top off the evening, the TV in our room didn’t get the channel the game was on.

I’m sorry I didn’t see a game there, but that particular game would have been miserable. As it is, I can say I was at Fenway Park. I remember that it was very small. And very wet. 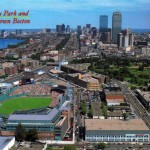 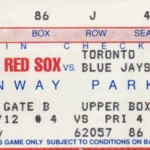 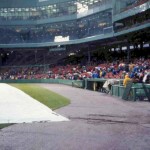 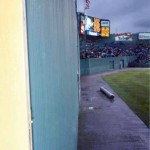