One of life’s joys is watching a master working at his craft. The master in question was one of my friends. His craft — saving money. my wife and I took a weekend trip to Indiana with him and his wife and another couple. We left home early in the morning and stopped at the Auburn-Cord-Duesenberg Museum in Auburn just before lunch.

After touring the museum, we looked for somewhere to eat lunch. Somebody spotted a Subway, so we parked in the lot of a burger joint next door. We walked over to Subway, and my friend pulled out coupons that allowed all of us to buy our sandwiches for half price. He had filled a cooler with pop so we wouldn’t have to buy any on the trip. We sat in the van in the burger joint parking lot while we ate, then walked across the road to a Dairy Queen for dessert.

We drove to Fort Wayne and stopped at a Plaza Inn because my friend could get a room for half price with his entertainment card. He had encouraged the rest of us to borrow cards from someone, but we were unable to do so. No problem. My friend simply convinced the desk clerk to allow him to register all three rooms under his name and get the discount on all three.

The main purpose of the trip was to see a Fort Wayne Wizard game at their new stadium. We drove to the stadium mid-afternoon to buy our tickets. We asked for the best tickets they had. Nope. The game was sold out. We asked for standing-room-only tickets. Nope. We asked if we could get in if season ticket holders didn’t show up. Nope. We explained that we had come the whole way from Chicago to see the game. Nope.

We left the park and visited Fort Wayne (the fort, not the city). We were making alternative plans for the evening, but my thrifty friend wasn’t about to give up. He requested that we head back to the park. 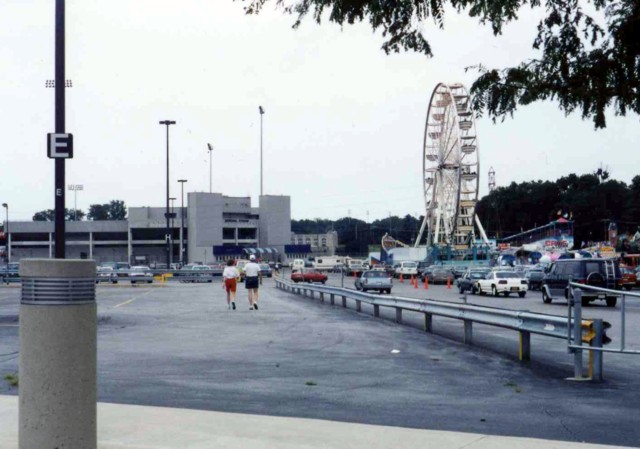 We sat in the van while the he and his wife walked off toward the stadium. They wandered around asking everybody they ran into for tickets. Nope. They found a vendors’ entrance that was opened and walked into the park, intending to find the main office and ask there or, failing that, take some pictures of the park to say they’d been there.

It just so happened that the Wizards were playing the Kane County Cougars, whose games the my friend and his wife attend on a regular basis. The Cougars were taking batting practice, so they sat down and watched for a while. Then my friend called to Brian Peterson, Cougar pitching coach, and motioned him to come over. He told him our tale of woe and asked if there might be any player passes available. Brian said sure, he’d be glad to help out. He told us to call at the will-call window half an hour before game time and the tickets would be waiting — and free. 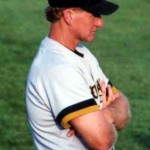 We had two hours to kill, so we went back to the hotel and rested. Back at the stadium, we were surprised to discover that we had to pay to park — even my friend can’t do it all. But Brian Peterson had kept his promise. We were ushered to a side gate and told we could sit anywhere in the general admission seats. The park was jammed, and the only seats we could find were way down the left-field line by the Cougars’ bullpen, just a few feet from the outside wall.

And there the fun ended. The game was dull. the benches had no back and were made of ribbed metal that gave me numb-butt, and the view was lousy. But it was free.

My friend had one more moment in store. We were planning on driving to South Bend on Sunday to see the Cougars play the South Bend White Sox. With one out in the bottom of the ninth, he went down and stood by the fence near the Cougars’ bullpen.

As soon as the game ended, the pitchers took off for the infield, but my friend was quicker. He called one of the pitchers — Matt Donahue — over and said, “Brian Peterson gave us passes for tonight’s game. We are going to be in South Bend tomorrow. Do you think you could get us tickets?” Donahue looked trapped, but he took our names and said he would do it. 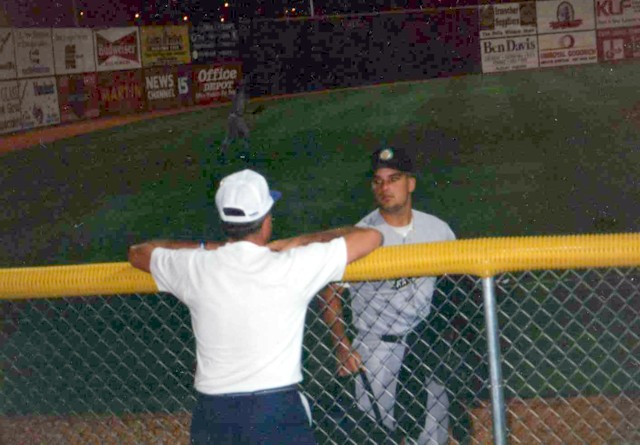