We heard a lot of horror stories about getting around in Boston, so we decided to tour the city on Sunday — Easter Sunday to be exact. It wasn’t at all crowded, but a lot of the sites were closed. I’m not going to detail everything we saw because that could take up a whole other blog. We spent about six hours in the city, and I took about six hours of video, which probably accounts for why I only have a handful of photos.

The Granary Burying Ground next to the Park Street Church, is two acres surrounded by buildings. Some tombstones only inches from the walls. Some of America’s most famous people are dead here — James Otis, Samuel Adams, the victims of the Boston Massacre, Paul Revere, Peter Faneuil, and John Hancock. Two things I found interesting:

The graves included one of Mother Goose. It’s probably not “the” Mother Goose, just some lady named Elizabeth Goose who died in 1757 and may or may not have told stories to her grandchildren. In the bottom photo is the monument to Benjamin Franklin’s parents, who are also dead. 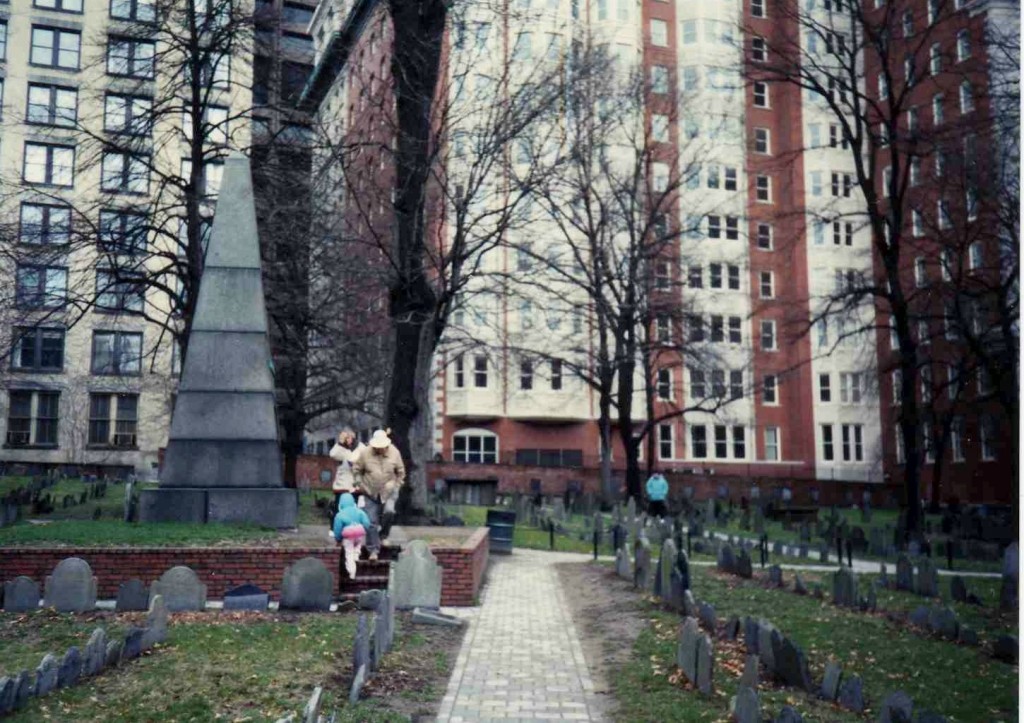 The Old State House. It was closed because the National Park Service had recently discovered that the roof isn’t attached to the walls; it is just balanced up there. They thought they should probably fix it, especially since the walls are bowing outward. I thought it was a very beautiful building, except for the subway entrance that has been built into the side of it. Anyway, in this photo you can see a traffic island in front of the building (right under the flag). This is the site of the Boston Massacre. I’m guessing the police car wasn’t there at the time. 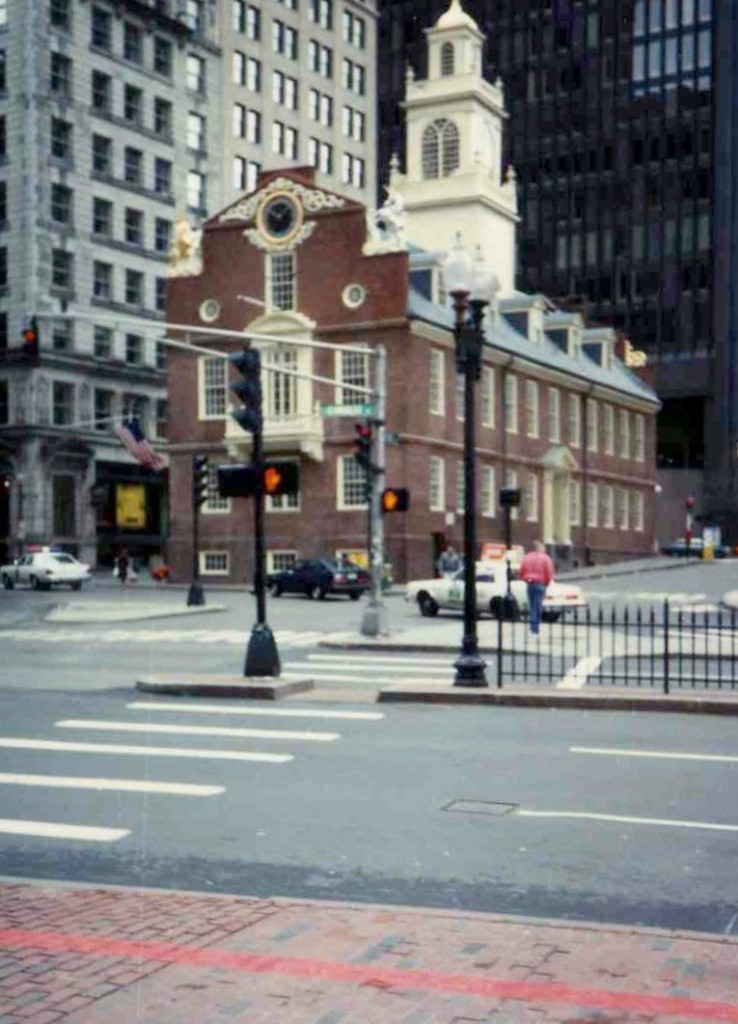 Half a block away was Faneuil Hall, which was also closed. It was built in 1742 as a public market and public meeting hall. 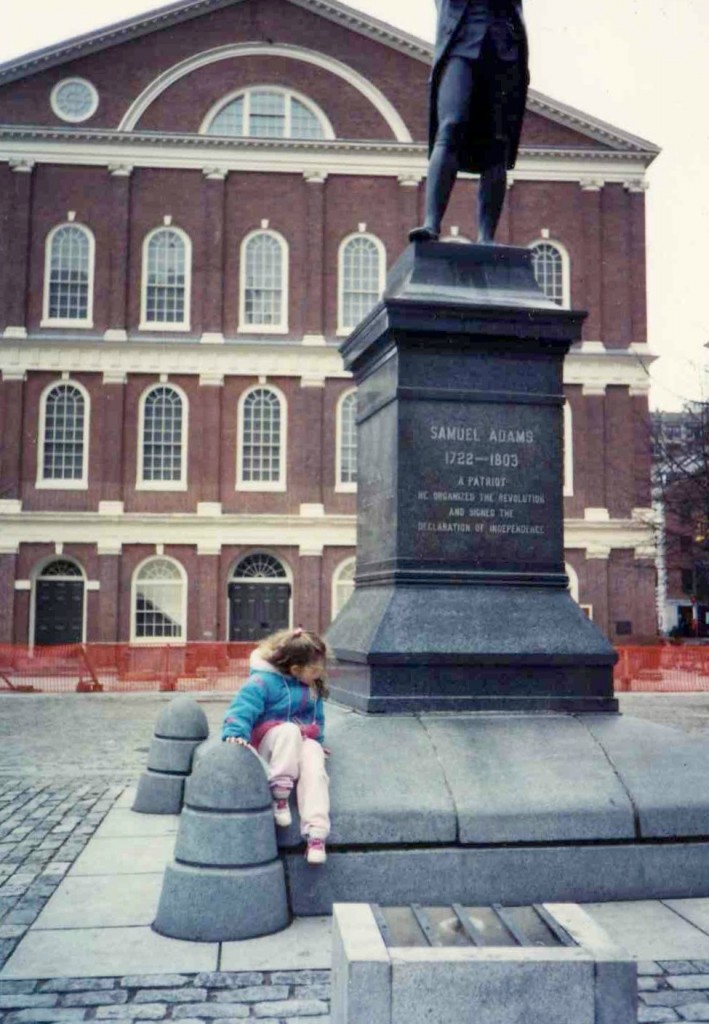 Our next stop was Paul Revere’s house. It’s amazing that it still stands. Over the years it’s been a tenement house and a shop and was in very poor condition, although all along people knew it as Revere’s house and continued to visit it. We hung around in the courtyard in the back for a while until time for our tour. As soon as we entered, some guy yelled at me to turn off my video camera. There was a bell outside that was forged in Paul’s foundry and one or two pieces of his silver, but none of the furnishings were original. 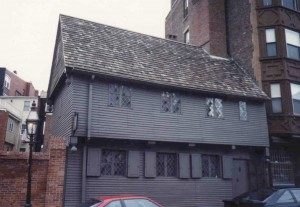 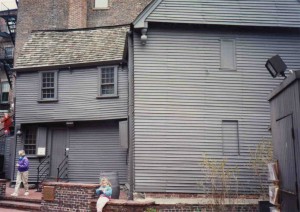 We stopped at the Old North Church. The official name of the church is Christ Church in Boston. It was built in 1723 and is still in use by the same congregation (but different individuals). It was from the steeple of this church that Robert Newman, the church sexton, hung the lantern to warn the countryside that the British were on the march. We wanted to go inside, but the congregation actually had the nerve to be conducting an Easter Sunday service when we arrived. We entered the tiny lobby and looked through the doors, along with a bunch of other tourists. It was a very formal-looking service, with a couple of guys in fancy red, white, and gold robes. Some people were going in and out, looking at the displays in the back of the sanctuary, but we thought that had to be distracting for those in the service, so we didn’t go in. The only photo I have of the church is from a distance, looking back across the river from Charlestown (see below). 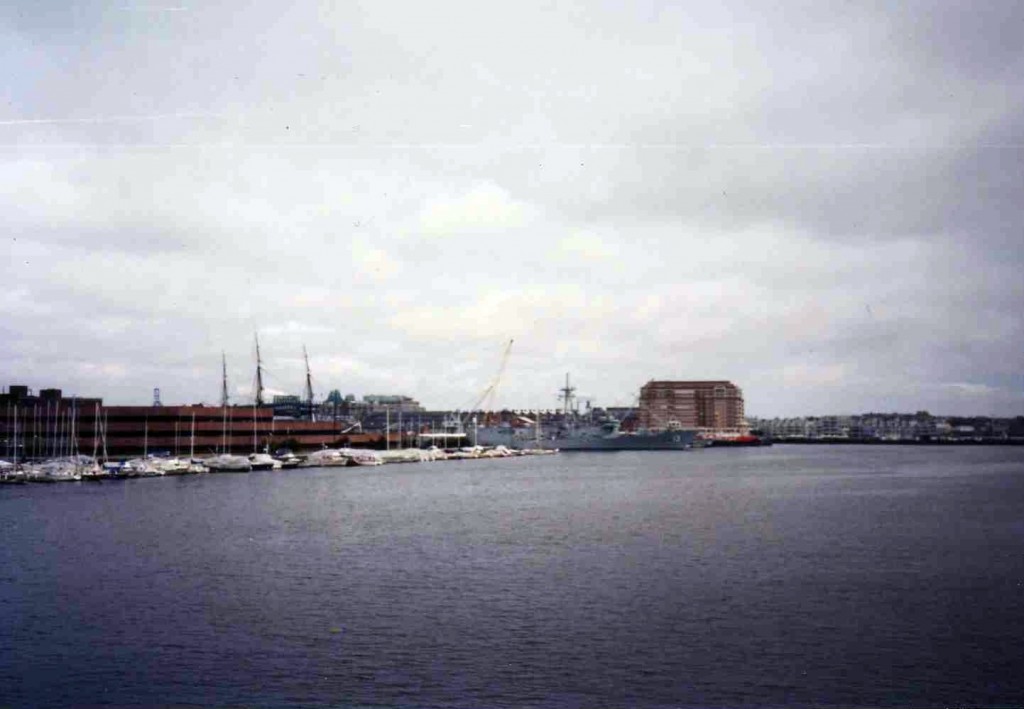 We crossed the Charles River and walked through a construction zone to the Charlestown Navy Yard (seen from the bridge in the photo above).

From the yard we could see the Bunker Hill Monument, but we didn’t go there. 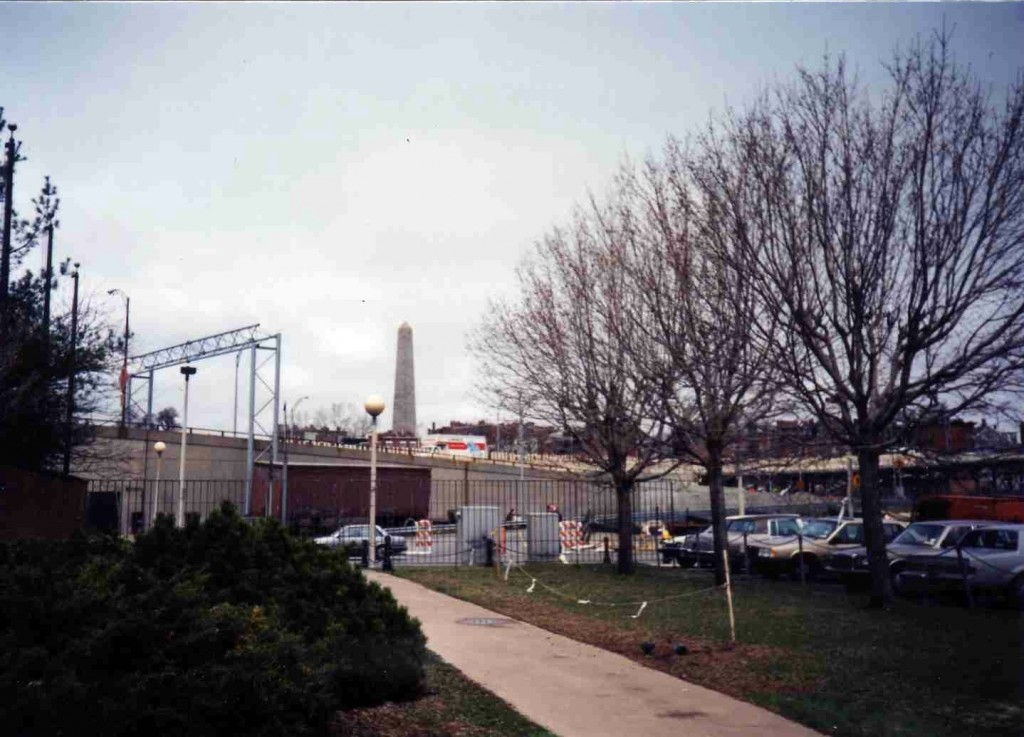 By this time it was early afternoon. We’d walked about three miles and hadn’t eaten a bite since breakfast. I was loving every minute of it, but my family was wearing out. We decided to tour the U.S.S. Constitution, then head back. I’ll cover that tour in a separate post.

When we finished with the Constitution, I wanted to tour the more-modern ships that were docked nearby, but I was the only one. We hatched a plan: everyone else would start back while I saw what there was to see then run back and met them at the Globe Bookstore. I looked at the other ships, took some video of the Navy Yard, and walked around the visitor center. I overheard the woman behind the counter telling another tourist about an easier way to get back to downtown. I apologized for my rudeness and cut in on the conversation. She told us about a water taxi that left from a pier in the Navy Yard and landed at the Long Wharf, about four blocks from the Globe Bookstore. I thought of my poor family and the long walk they had to endure. I felt a little guilty, but what could I do? If they hadn’t been in such a rush to get back, they could have taken the taxi too. I wasn’t sure where the boat docked, but I found a likely spot and waited. During the 15 minutes before the taxi arrived, I had three separate people, including a guy from Germany who was in town to run in the marathon the next day, ask me where to catch the taxi. I told them that I thought they were in the correct place and hoped I was right. I was.

The taxi had two levels, one with seats down below, and a standing-only area in the back. I chose to stand and video-taped the entire 15-minute trip so my family wouldn’t miss anything. Shortly after we left the dock, a guy came around to collect the fare … are you ready for this? … $1.00. I realized after I got off that I hadn’t taken a picture of it, so I snapped one through a fence. 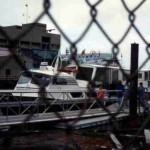 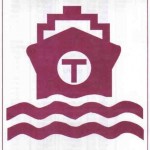 Boston across the Charles River from the Navy Yard. The white steeple of Old North Church can be seen in among the modern buildings. 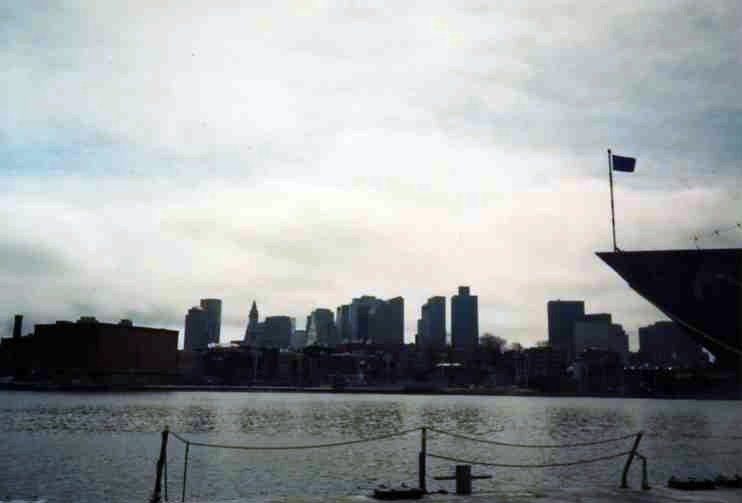 I walked the short distance to the Globe Bookstore and found my family sitting on a bench across the street. They had been worn out when they left me. By this time they were absolutely beat. When they found out I’d taken the water taxi, they were understanding, although I had to look very, very closely to notice it. It was several days before Dad quit hassling me about it. I left them sitting on the bench while I went into the bookstore. I didn’t have the heart to stay more than five minutes, but I did buy a book on old baseball stadiums. When I came out, we took the long walk back to the car. It wasn’t really that long, but it seemed like it. By this time, I was tired—and I had taken the taxi. I took these photos in the morning when we first passed the store. (It hadn’t opened yet.) The woman in the photo was feeding the pigeons. She saw us watching her and said to my wife, “Don’t you feel sorry for them? Nobody cares about them.” We nodded. She departed when her supply of food ran out, and there was nobody left to care about the pigeons except us. Fortunately, Dad had bought an Egg-McMuffin at a nearby McDonald’s, taken a bite, then given the rest to my daughter. She unselfishly shared it with the birds. 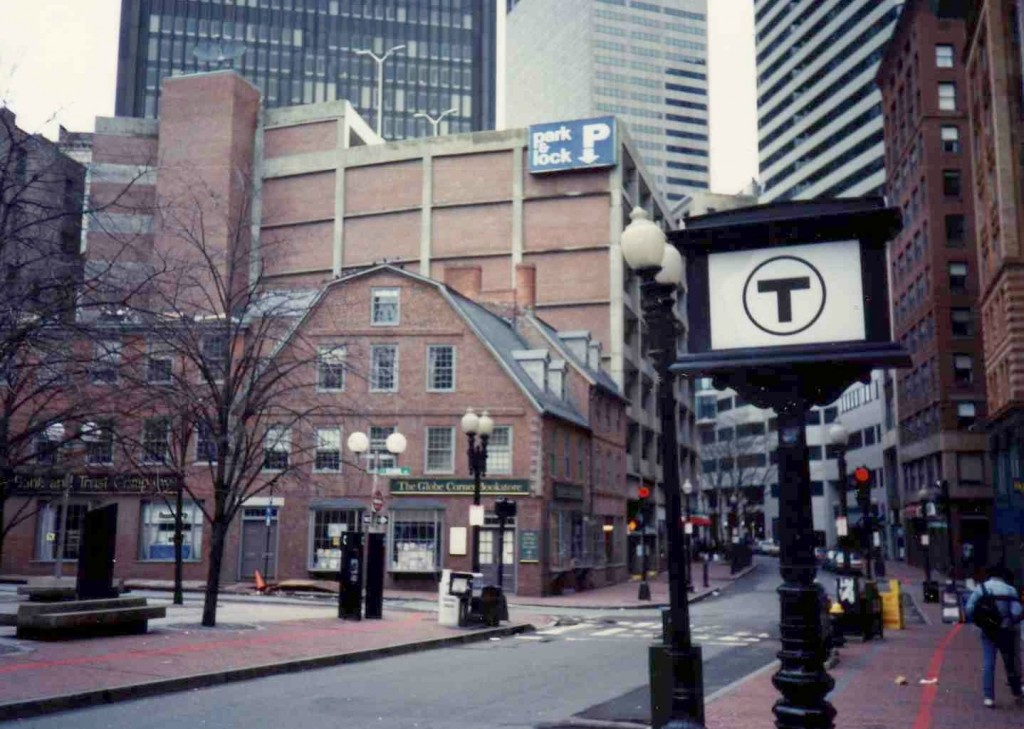 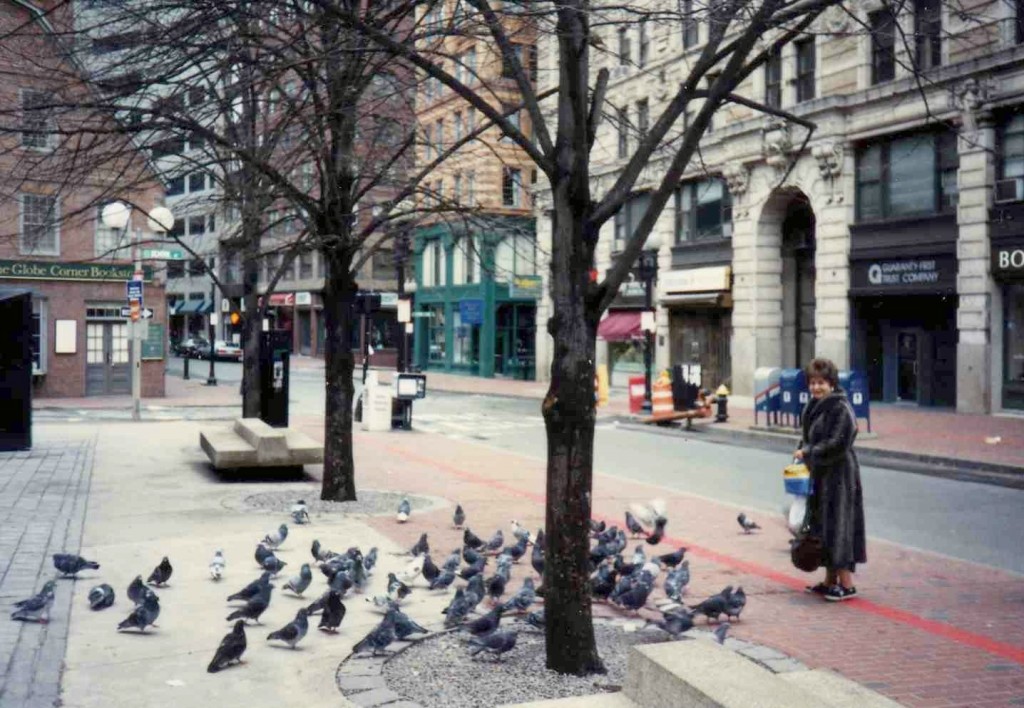