Way back last December, when Sally’s choir performed with the Gettys at the Pike Peak Center, I noticed that the Glenn Miller Orchestra was coming on June 16. Sally and I wanted to go, and we invited Megan and Maddie along. I didn’t realize at the time that June 16 was Fathers’ Day, nor did I realized that I would have a daughter living in Colorado at the time. To make it up to Lindy, we went with her to Rudy’s on Saturday afternoon and to Urban Egg on Sunday morning.

We picked up Megan and Maddie at their apartments and got to the concert hall about half an hour early. Many of our fellow concert-goers were quite old. I’m pretty sure the music was the hot stuff for their generation. I’d gotten cheap seats in the upper deck—for $45 each.  This was the view from our seats. 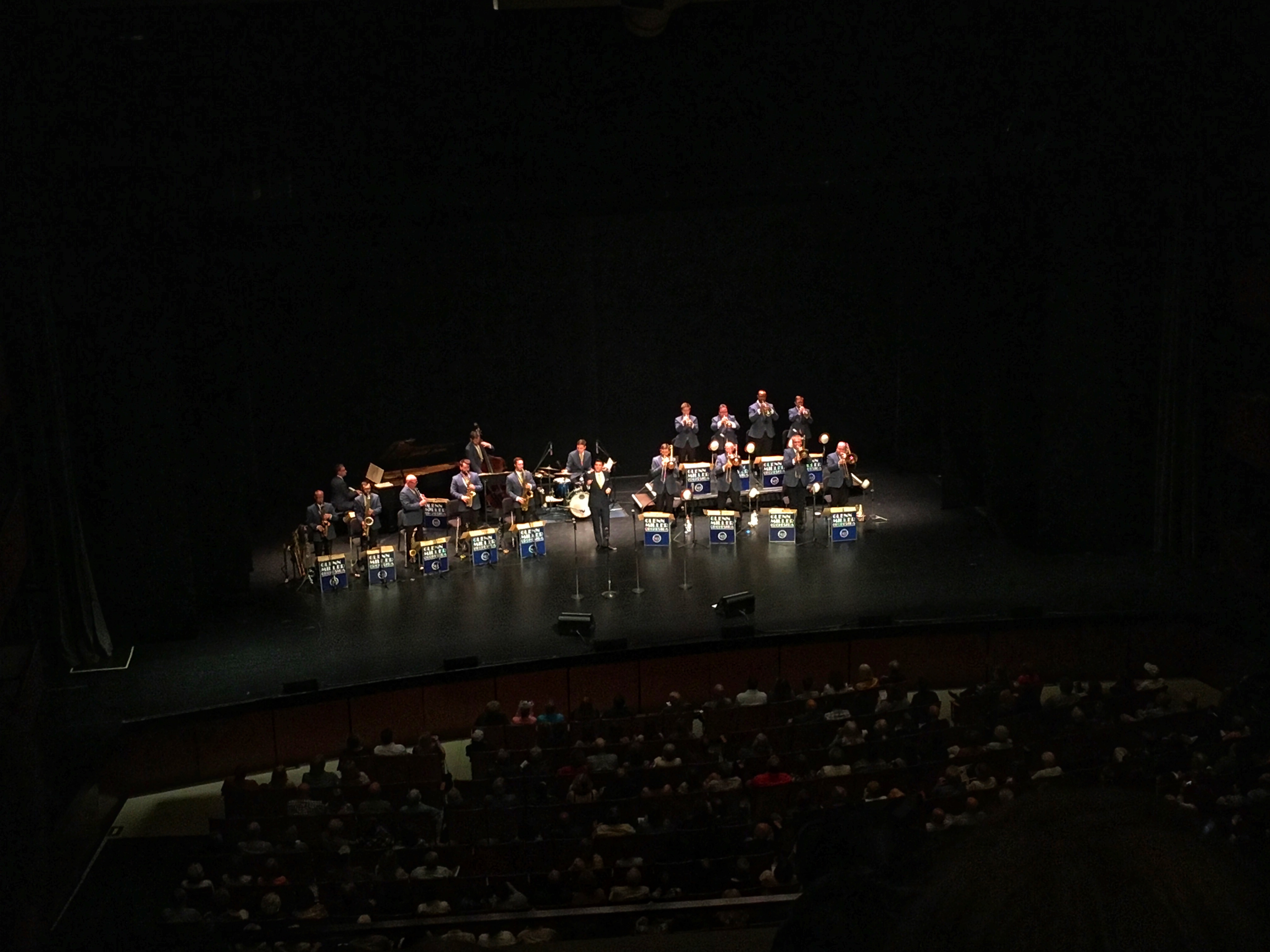 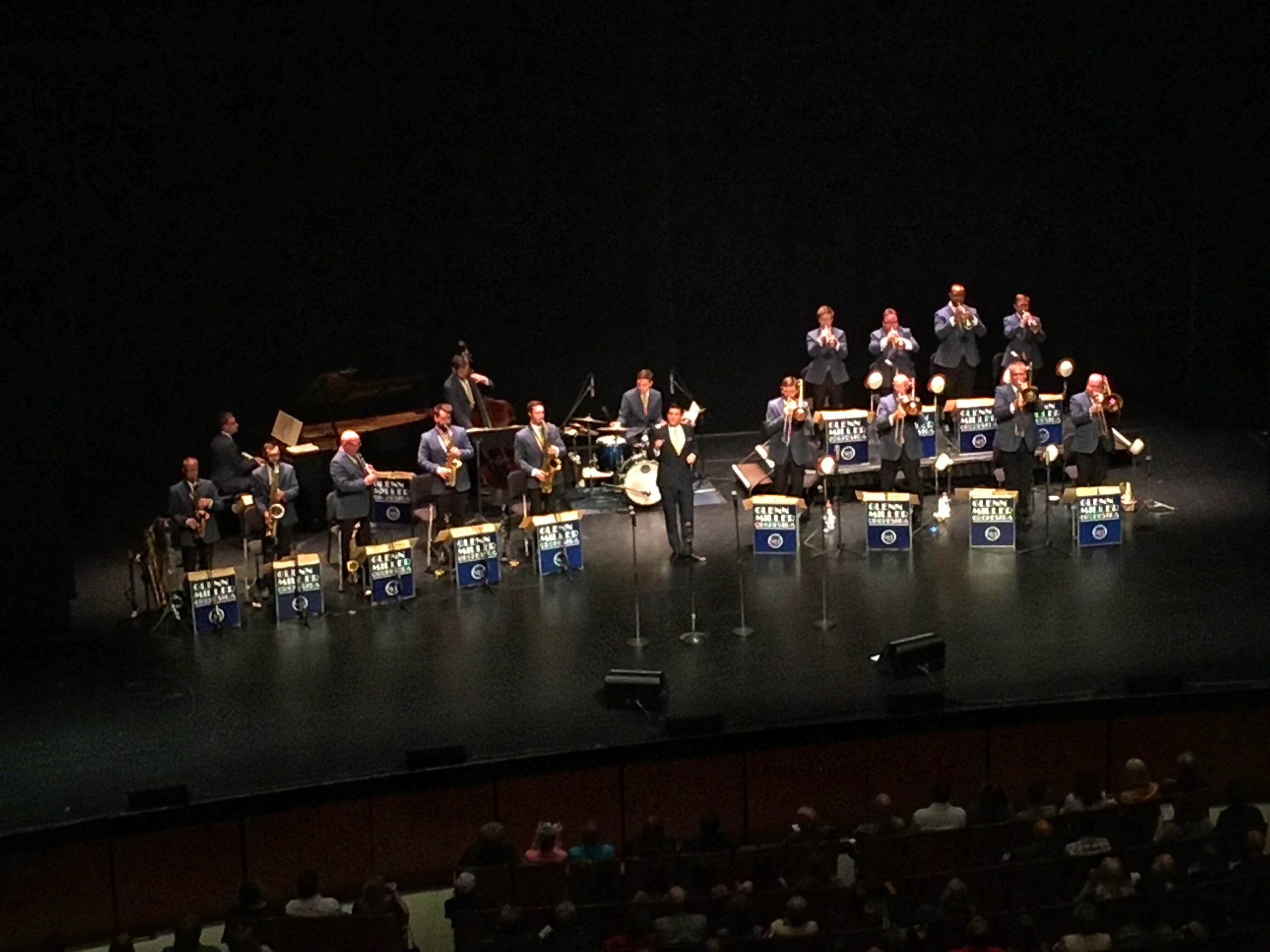 The concert lasted about two hours, including an intermission. They played a lot of the classics, including “Pennsylvania 6-5000,” “Chattanooga Choo-Choo,” and “In the Mood,” all of which I recorded (although my phone quit recording halfway through “In the Mood.” Most of the songs were arranged to give the band members opportunities to solo, which I wasn’t crazy about. A lot of the solos were just jams that wandered from the melody. The band leader sang a few times, but we weren’t crazy about his voice. A woman came out and sang five or six songs, and she was fantastic.

I think it’s safe to say Megan was enjoying herself. 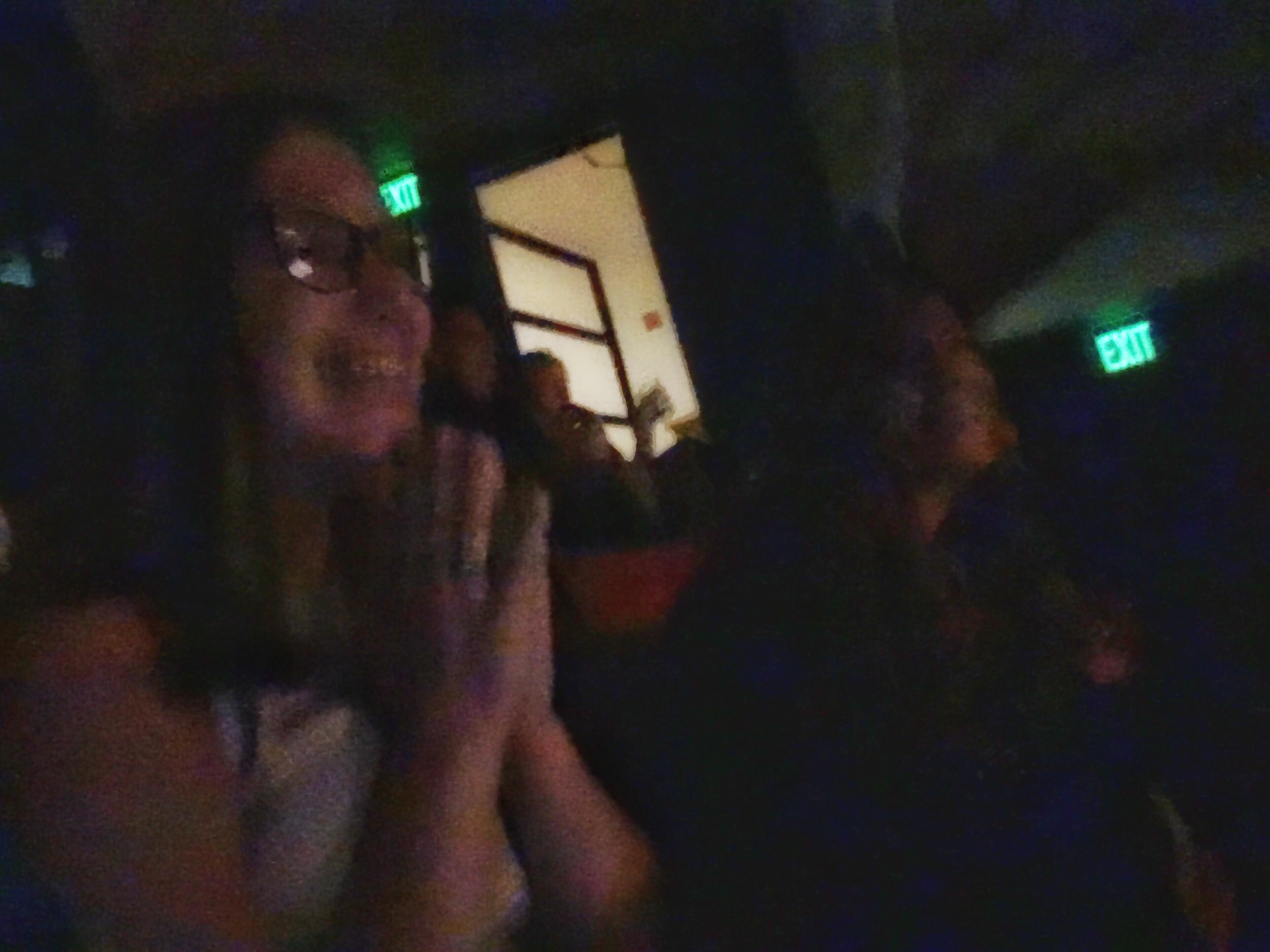 When the concert ended, it was pouring rain. This has been an unusual spring for Colorado, with rain almost every day—when it isn’t snowing. Our car was parked a good 100 yards from the door, and we got soaked. 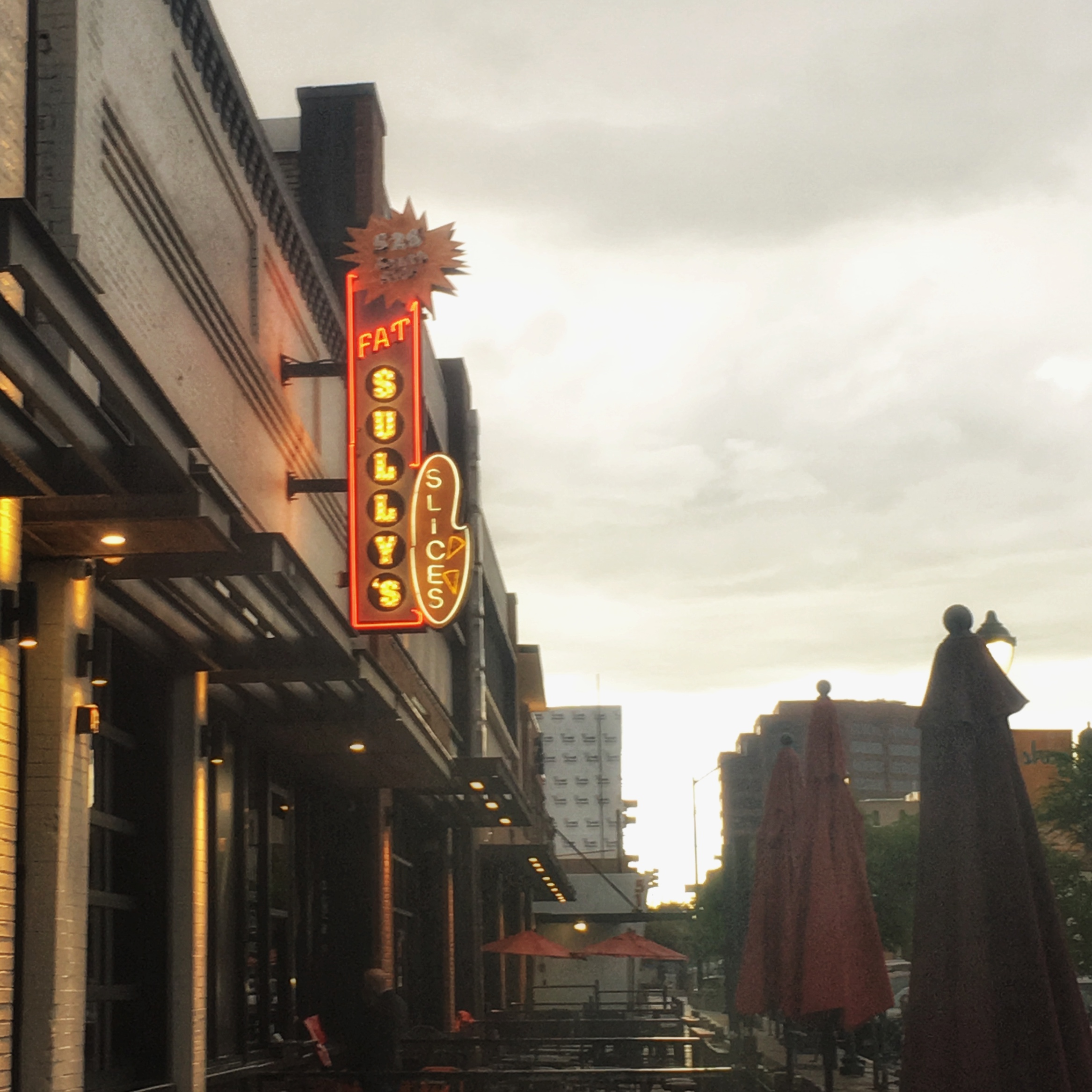 We drove a few blocks to Fat Sully’s Pizza. Our order got messed up, and it took more than an hour to get our food, but we had a good time chatting and laughing. When the pizza came, it was huge. it was New York-style, thin and floppy. We had to fold it or roll it to eat it. It was tasty, with zesty sauce. The Canadian bacon/pineapple side was Megan’s idea. None of the rest of us had more than a taste. 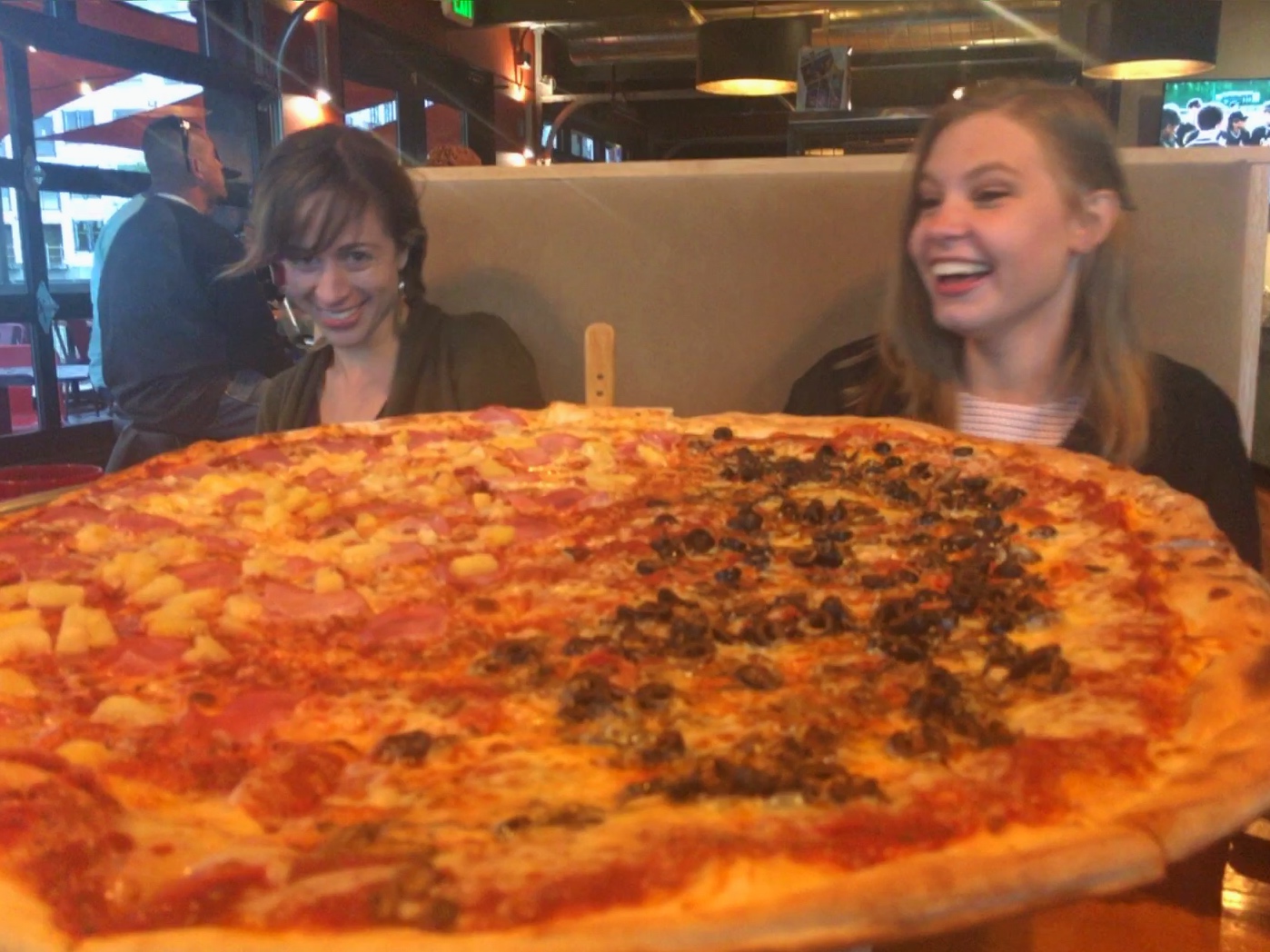 Maddie had us in for ice cream and a tour of her place. We met her roommate, Brooke, and had some more conversation and laughs. It was a great—albeit damp—day.

This entry was posted in Food, Music, Performances. Bookmark the permalink.