I’ve been aware of this lighthouse for years — I’ve parked in the lot many times when birding along Lake Michigan — but I’ve never taken the tour (Saturday and Sunday afternoons at 2, 3 and 4).  Only 12 people are allowed inside at a time, and it’s first come, first served, so I wasn’t sure what our chances were. We arrived an hour early.

A line squall moved through the area while we were eating lunch and made the already hot and humid air even more miserable. We could see clouds of damp rising off every surface. A firm but polite young man informed me that the beach below the lighthouse was closed due to lightning. The sky overhead was blue, but he explained that they are required to wait a full half hour after the last strike appears on the radar map. He did permit me to venture out a short distance to take this photo.

It was so miserable out that my wife returned to the air conditioned car while I bravely held our place as first in line. This was totally unnecessary — only seven people showed up for the 2:00 tour. But I was able to perform a useful service while I sweated. Two women wandered by and took photos. I was sitting on the front steps and asked them if they wanted me to move or to pose for them — then I asked if they’d like me to take their picture. They did. A while later, an elderly couple came by. They live in Arlington Heights, but have a condo in Door County and have made a hobby out of visiting the lighthouses up there. At least the husband did. The wife’s attitude seemed to be one of slightly-irritated tolerance. I asked if he’d like me to take a photo of the two of them, and he handed me his very nice camera and began ordering me around while he and his slow-moving wife stood in various places. 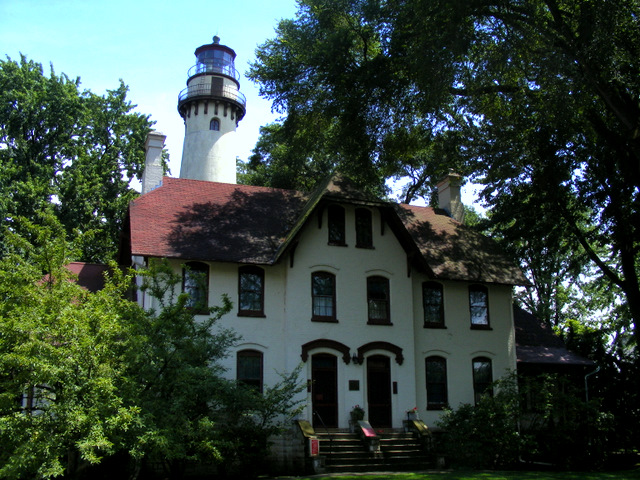 The lighthouse was built in 1873 because of the numerous shipwreck caused by the shoals that extend out into the lake as much as eight miles. The light remained in service until 1935. At that time, it was turned over to the city of Evanston, which still lights the lamp every night. It’s listed as a private aid to navigation. The light is 113 feet above the water. 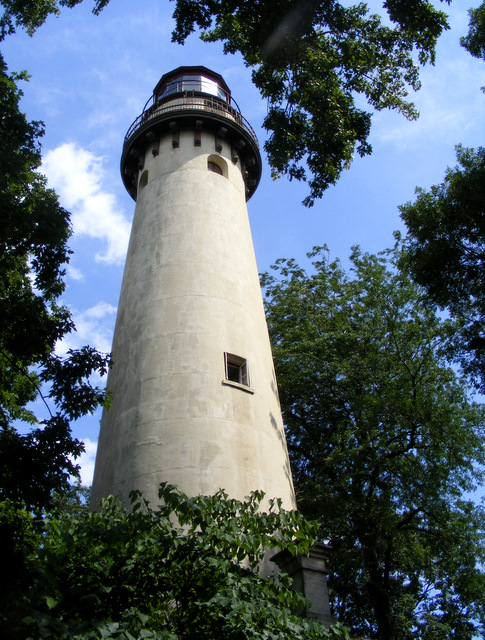 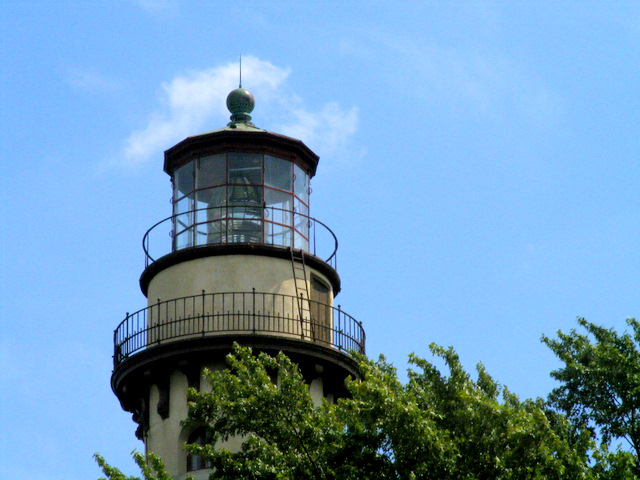 It is one of the prettiest lighthouses I’ve seen, although it’s tough to get a good look with the trees as tall as they are. There are two fog signal buildings on the grounds. The Garden Club of Evanston has turned the whole place into an impressive garden. 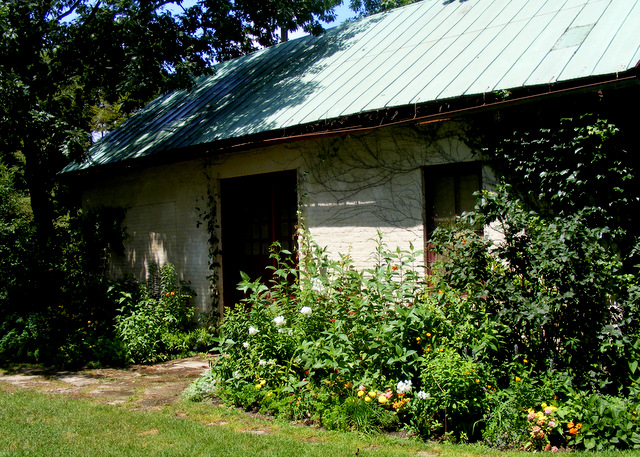 The keeper’s house is a duplex — the head keeper stayed on one side with his family and the assistant keeper and his family stayed on the other. A small museum filled the first floor of the head keeper’s dwelling. Our “tour” consisted of allowing us to wander about two rooms and a hallway for 15 minutes, reading the panels that gave the history of the lighthouse.

One room featured an exhibit on a disaster that occurred nearby in September, 1860 — before the lighthouse was built. The passenger steamer, Lady Elgin, was carrying members of the Wisconsin militia from Chicago to Milwaukee on a stormy night. The schooner Augusta collided with the larger ship and poked a hole in the side beneath the water line. The Augusta was only slightly damaged and continued to Chicago, for which the captain was later blamed. The Lady Elgin had insufficient lifeboats and, in a brilliant move, stored its life preservers in a locker below decks near where the breach occurred. A crowd, including Northwestern University students, lined the shore and offered what help they could, but more than 300 people died. 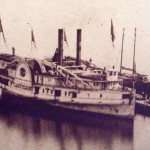 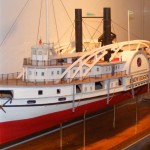 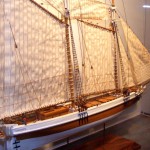 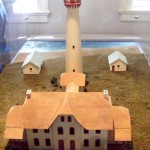 When our 15 minutes were up, we were ushered into another room to see a 10-minute DVD about the lighthouse and the Lady Elgin and pretty much everything else we’d just spent 15 minutes reading about.

We were then given a bit of actual tour. We were led down the long passageway from the keeper’s house to the tower. 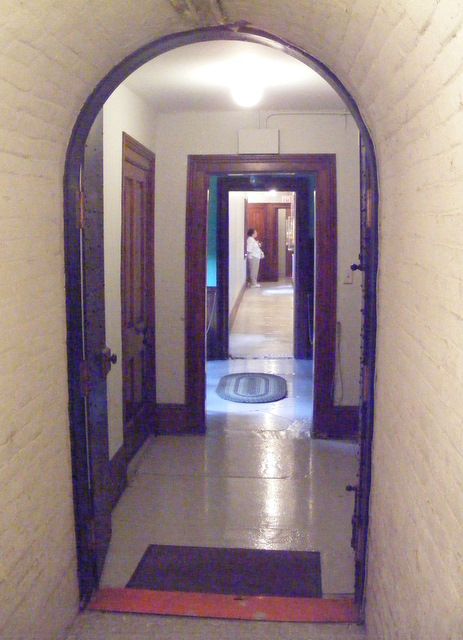 The iron doors visible in the foreground of the above photo were put in place, so we were told (although I’m skeptical), to make the tower into a fortress for the keeper and his family in case of attack by political dissidents. I think it’s much more likely that they were fire doors since the room with the oval rug was originally where the fuel was stored.

There are 141 steps in the tower. Two of the visitors decided not to make the effort. 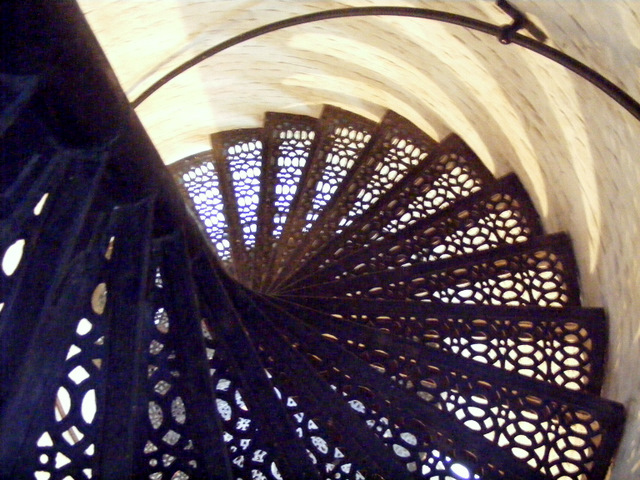 Our guide proudly wore his uniform as a member of the United States Coast Guard Auxiliary. Here he is in the tower standing next to the second order Fresnel lens, the largest size ever used on the Great Lakes. 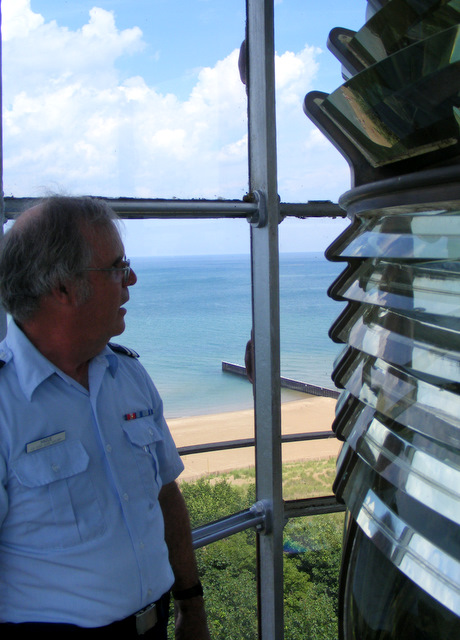 It must have been 110 degrees in the small enclosure that surrounds the lens. We only stayed up there for perhaps six minutes. Visibility was amazingly good for such a hot, steamy afternoon.

The keepers’ dwelling from the tower. 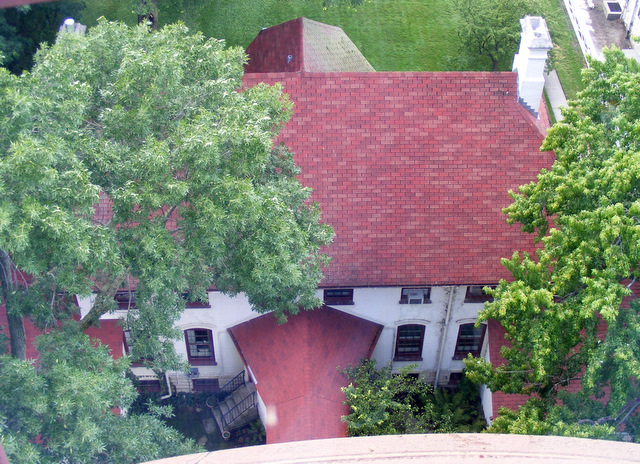 Looking east over the beach, which had by now reopened. 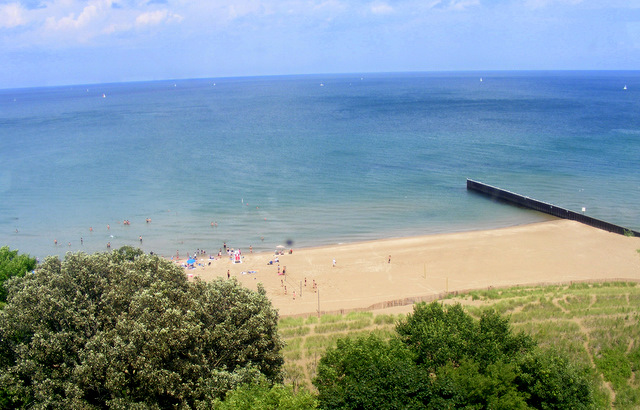 Looking north toward the Baha’i Temple. 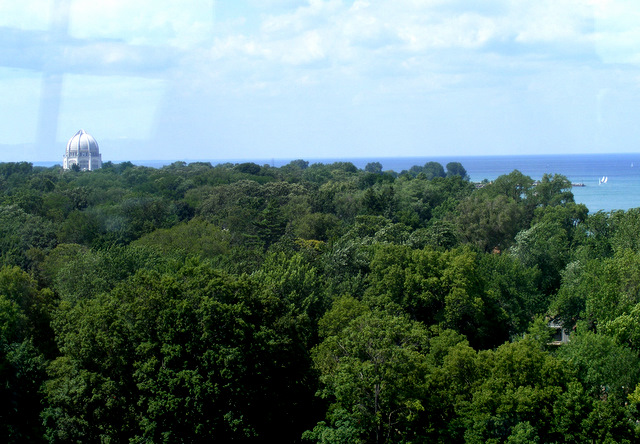 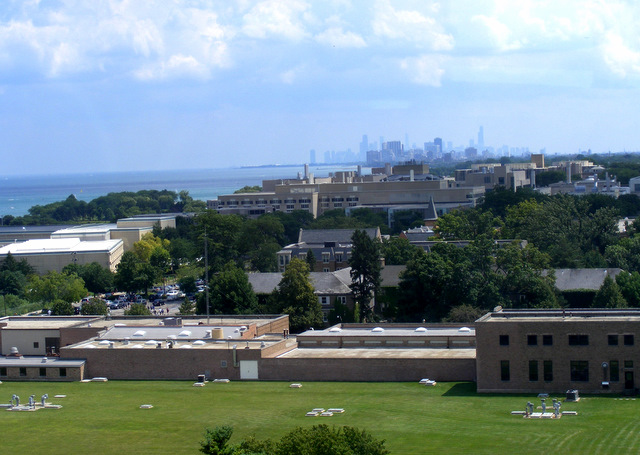