My birding year got off to a great start back in January, helped by my trip to Florida. By the end of January, I’d already seen 133 species. I had trips to Arkansas in April and Ohio in May and figured this would be a banner year. Then the virus hit and the trips were cancelled and I couldn’t even go very far in Colorado. I went along with the restrictions until it became evident that the restrictions were excessive and probably weren’t helping anyway. But as the peak of spring migration approached, I decided to break out a bit. I’ve still been avoiding people and haven’t been stopping at stores or restaurants, but I’ve been driving further. Still, I identify as being at home, so that should be good enough.

On Sunday, I drove two hours down to Rocky Ford to bird at Holbrook Reservoir. I had the place to myself for the three hours I was there and enjoyed myself tremendously. There were birds galore. I saw 50 species, including 13 new ones for the year. With the Cliff Swallows I spotted on my way home, I now have 200 species. It can still be a good year, but not like it was shaping up to be.

This Semipalmated Sandpiper hung around for a few minutes at the base of the boat ramp.

I later saw a flock of them on the far side of the reservoir. I tried to get good photos. When I got home, I checked out the photos and found a Western Sandpiper in the mix. It’s the rufous bird in the lower right. The rest of the birds in the photo are Semipalmated. 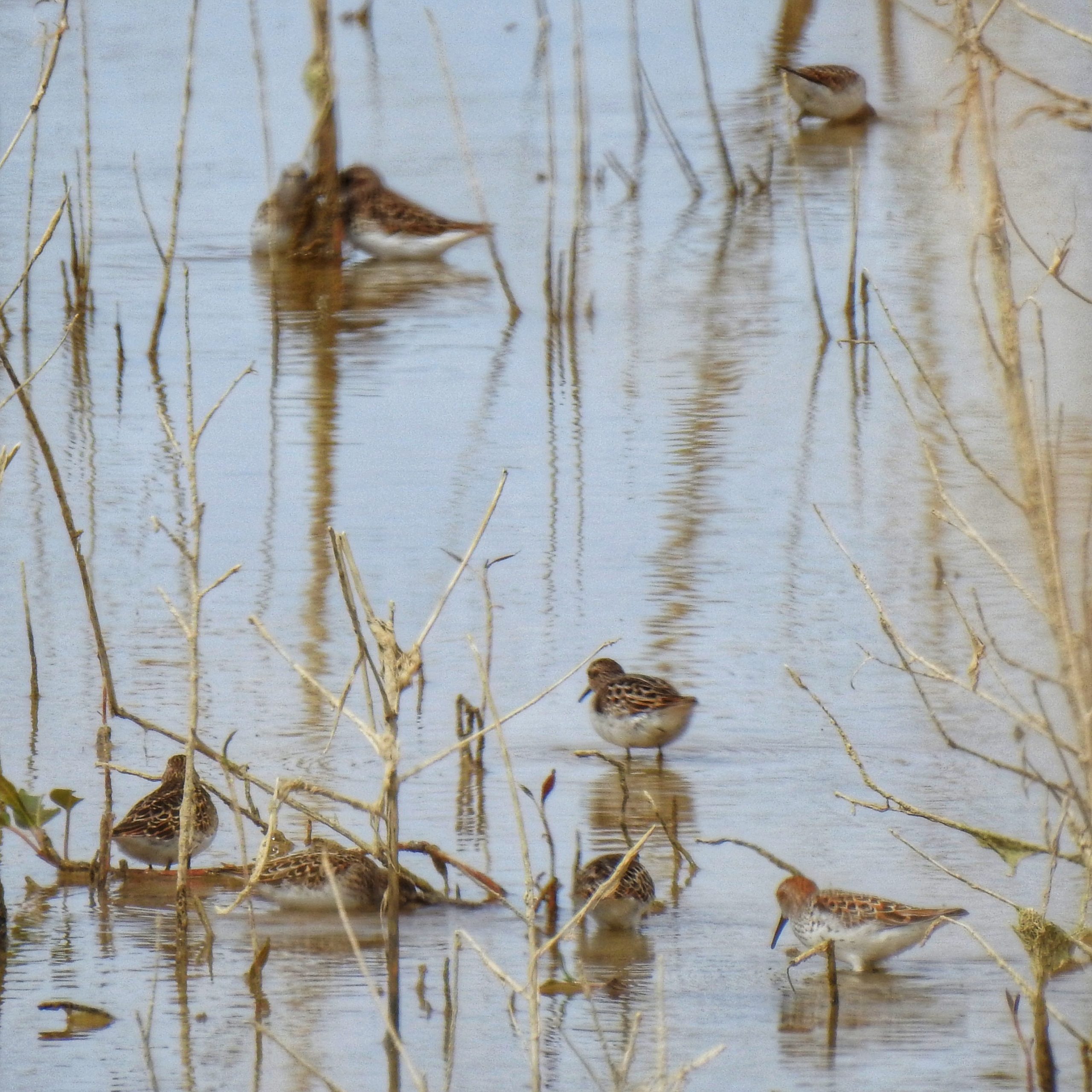 A Willet. Not long after I took this photo, it flew off, giving me great looks at the white flashes on its black wings. It’s a big shorebird, with a body about the size of a Rock Dove.

Near the Willet was this Baird’s Sandpiper. They’re usually up on the dryer parts of the shore, but this one was wading in shallow water by the foam. The key marks are the buffy wash, the black spots on its back, and the wing feathers that are longer than the tail. 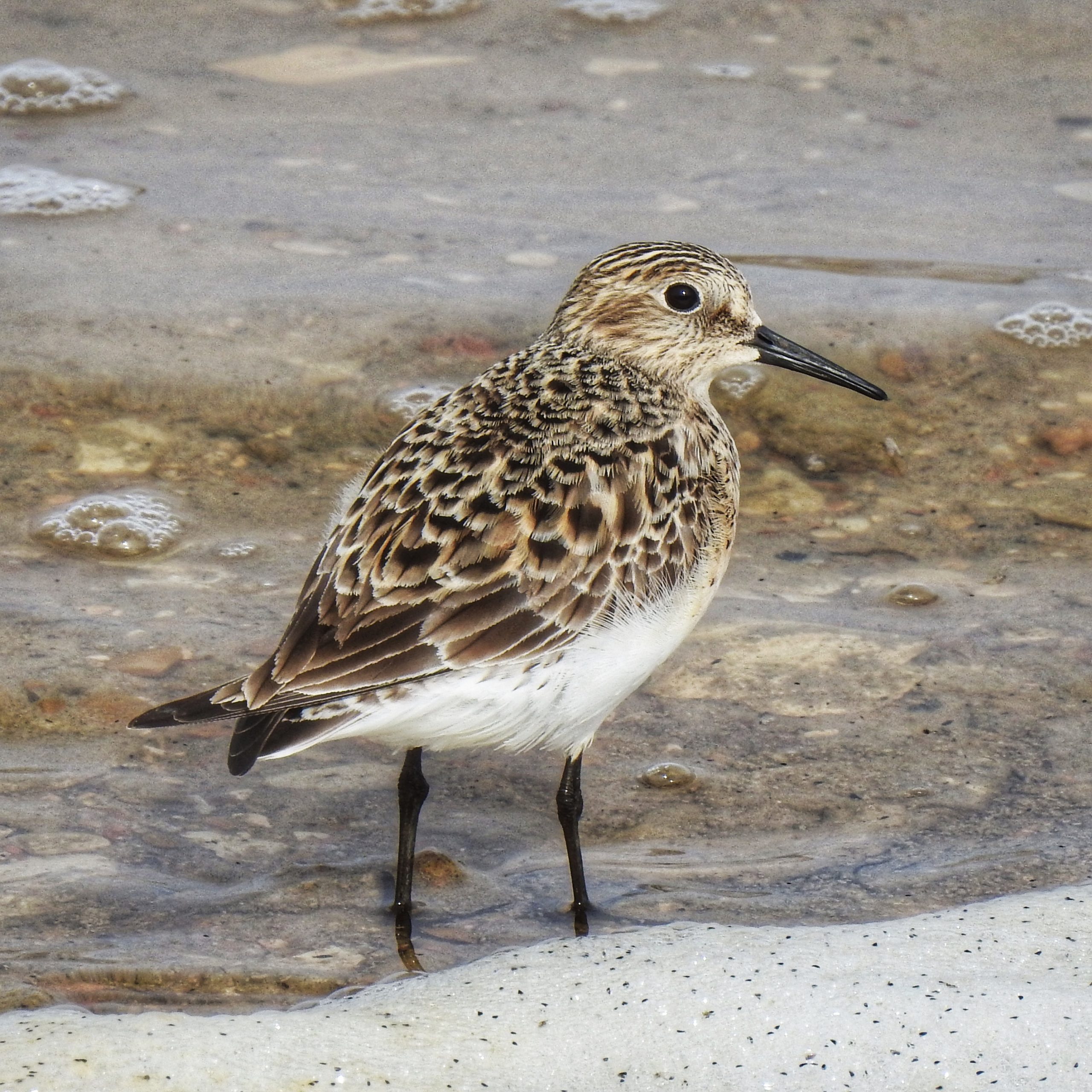 I saw Black-necked Stilts in the distance and I was hoping I could get close enough for a reasonably-good photo. Then two of them walked by 30 feet away as I was sitting in my car. They’re one of the birds that are pretty much all field mark. This is by far the best look I’ve ever had at stilts. 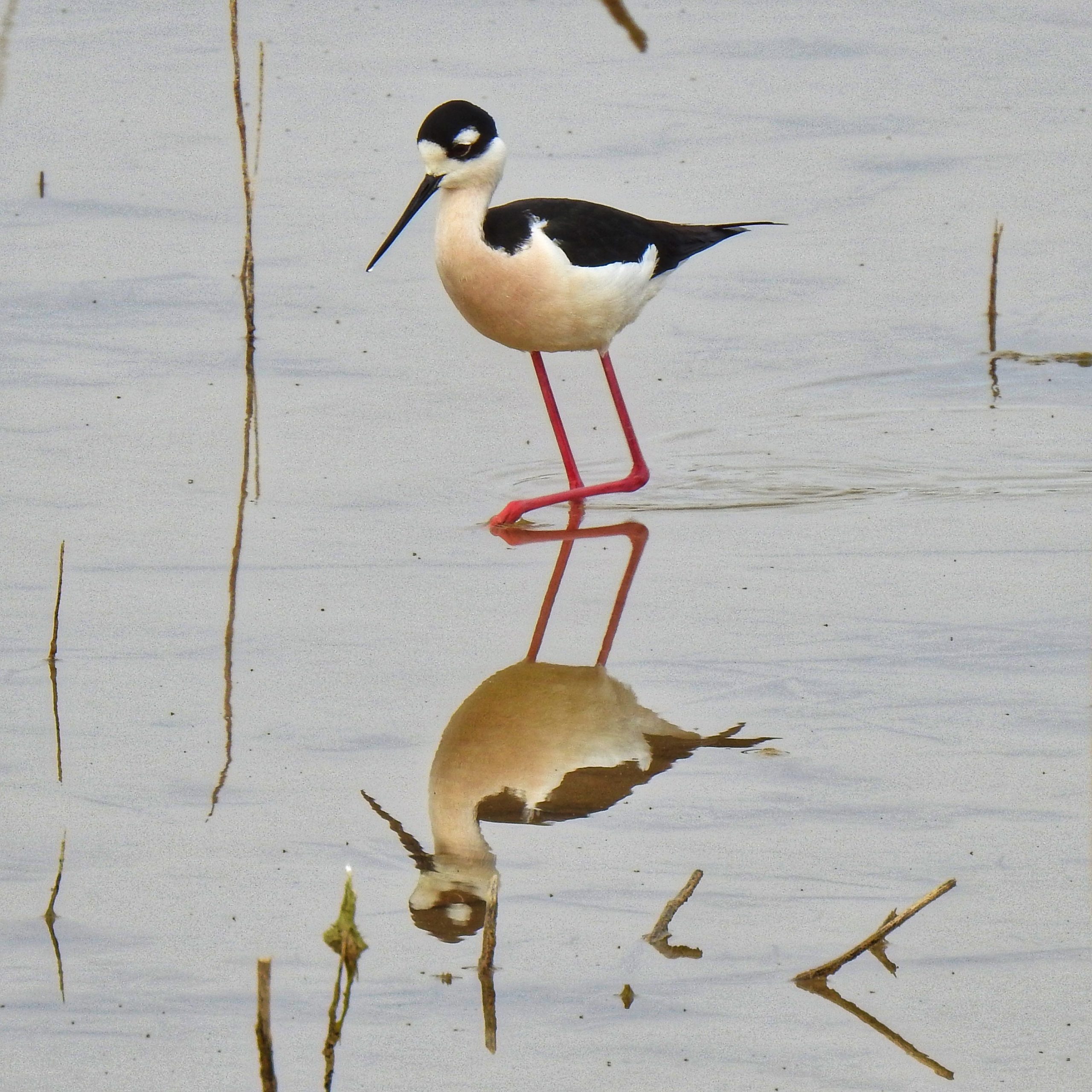 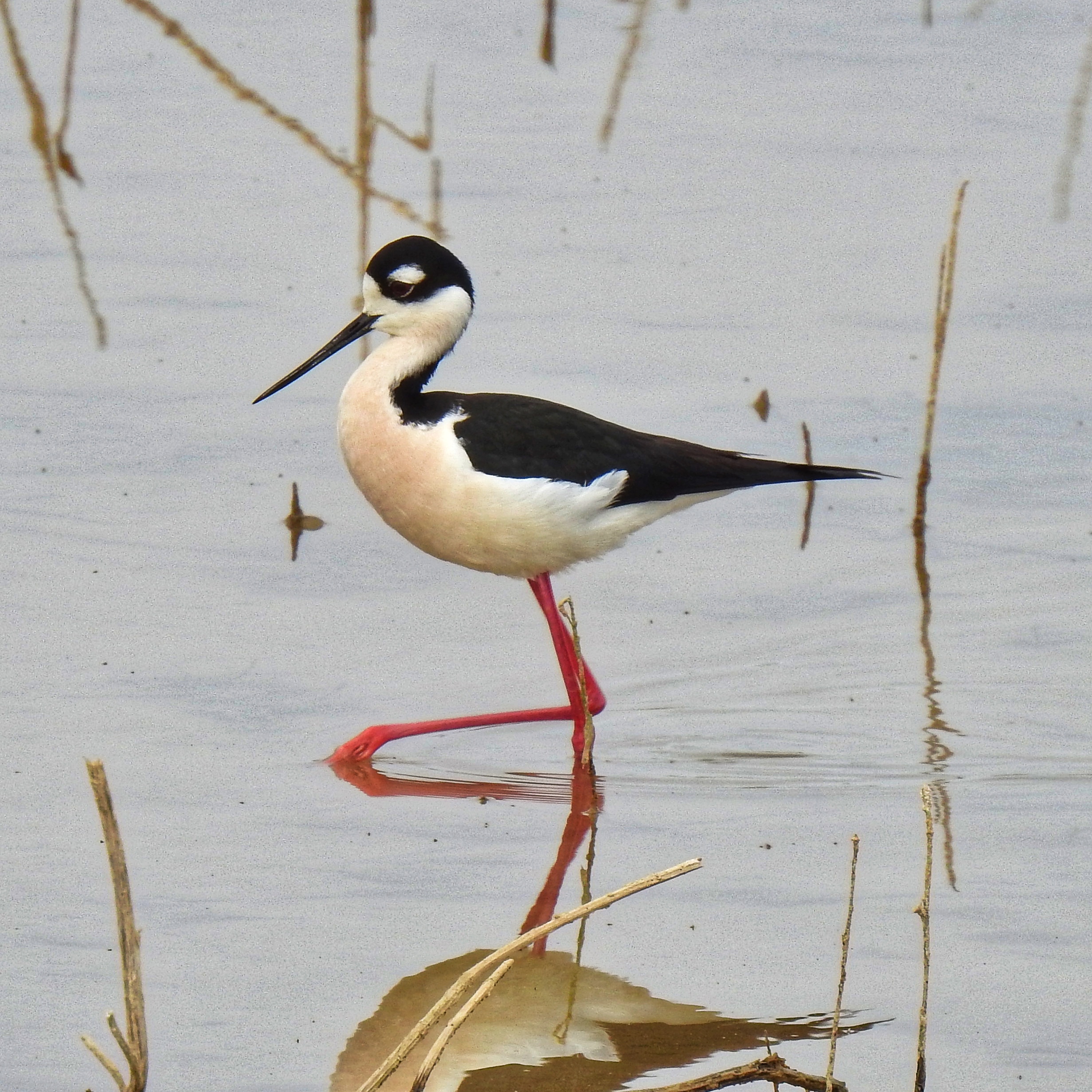 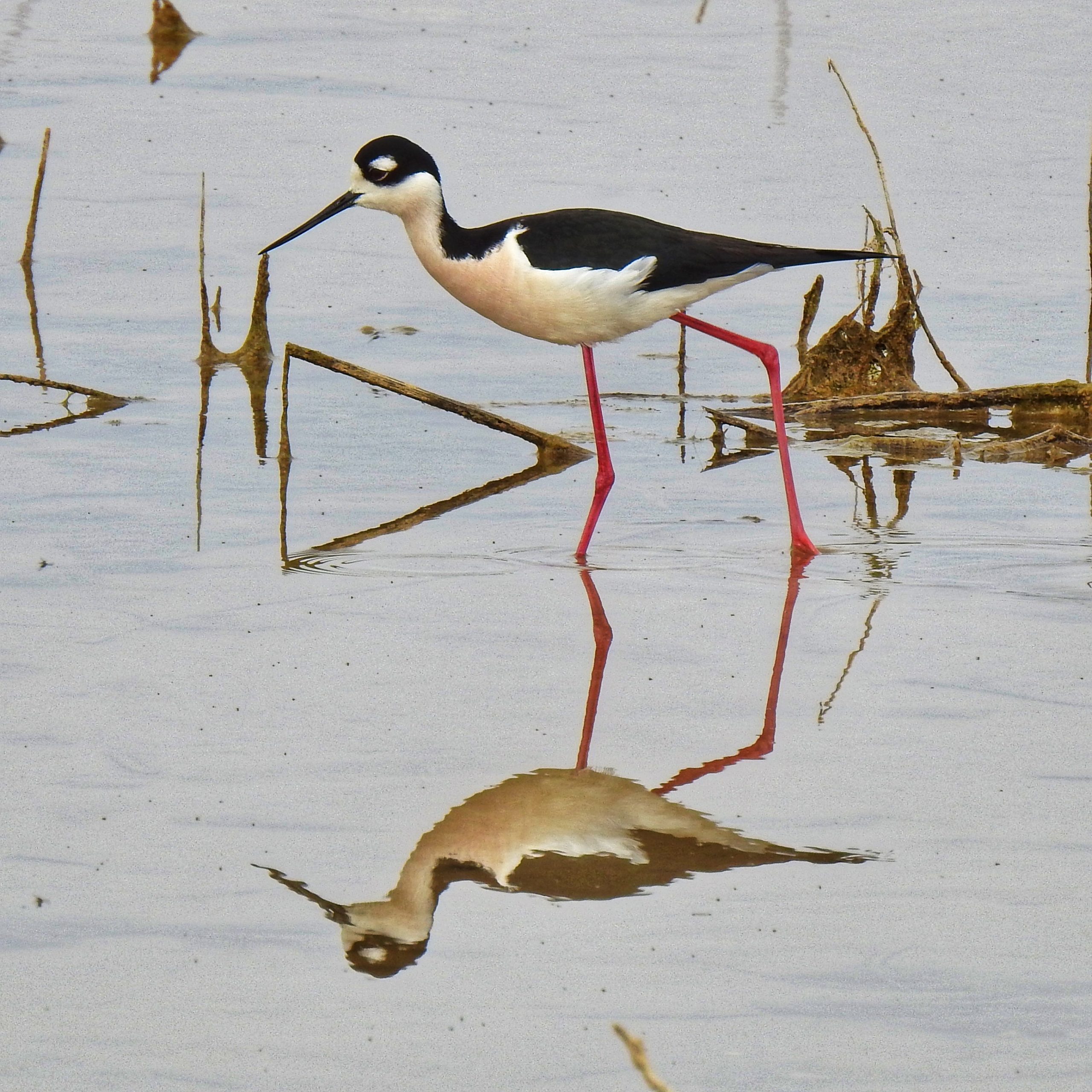 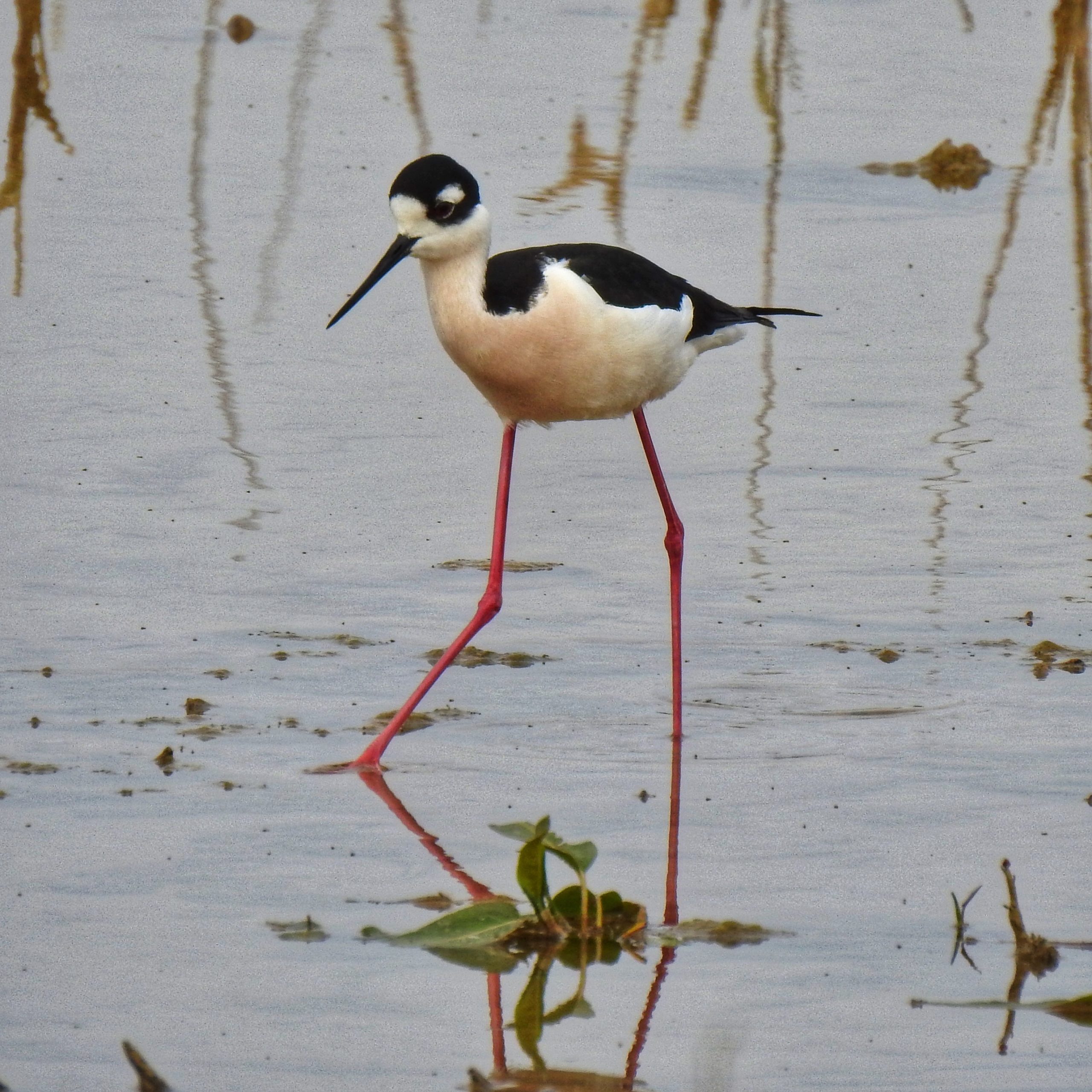 An American Avocet wandered by and had a brief tiff with one of the stilts. My photo didn’t come out great but you get the idea. I like the say the stilt just leaned away. 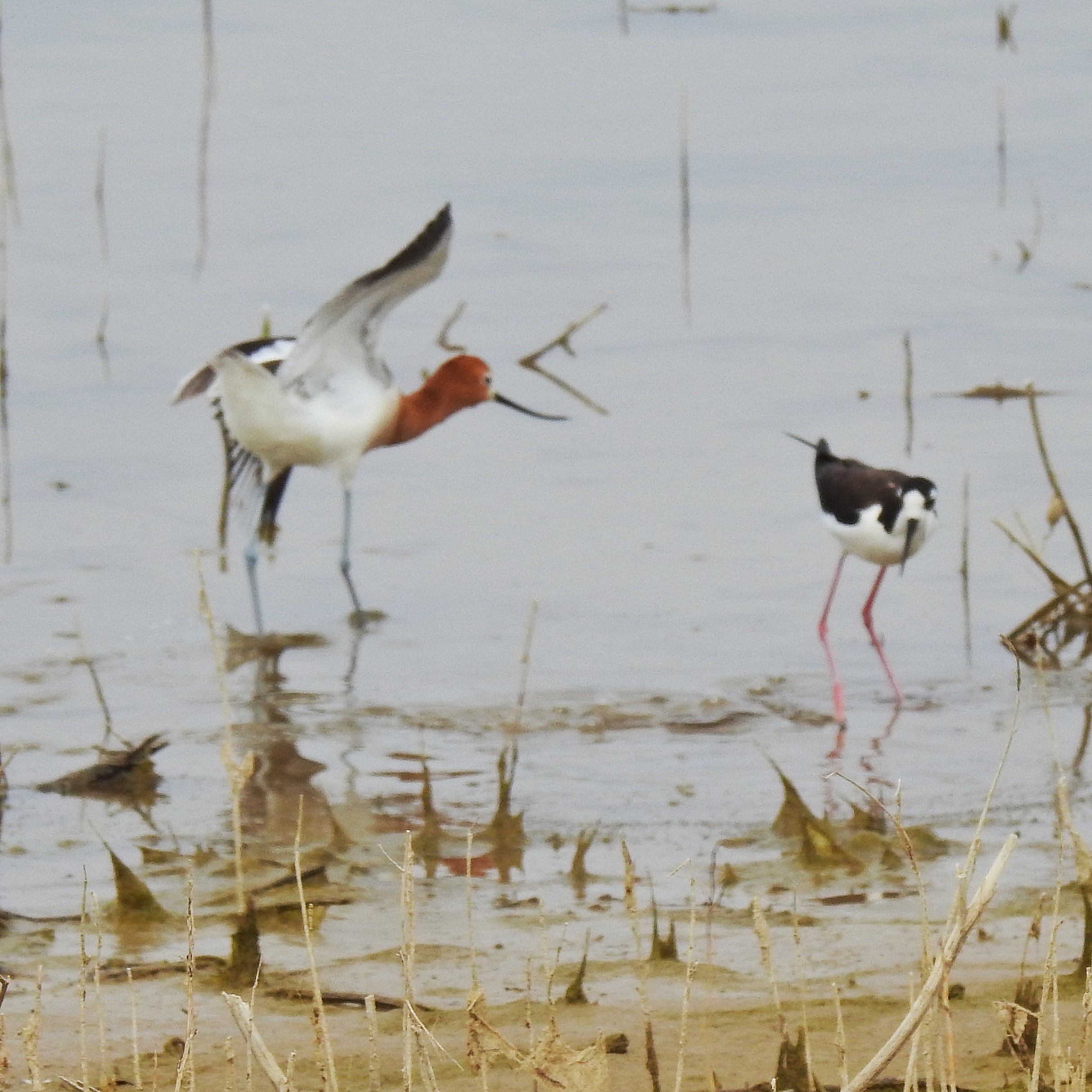 The avocet continued in the are for a while. 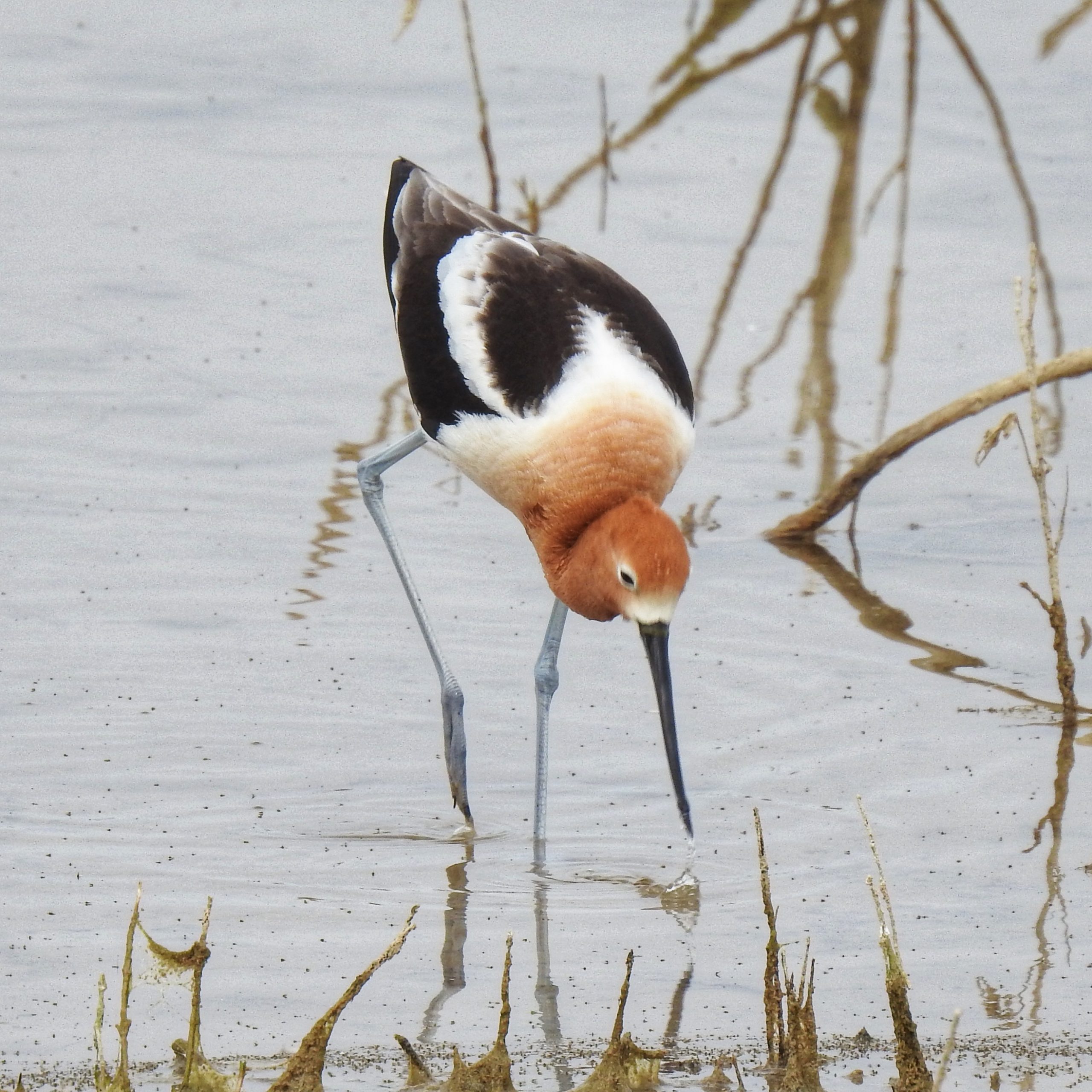 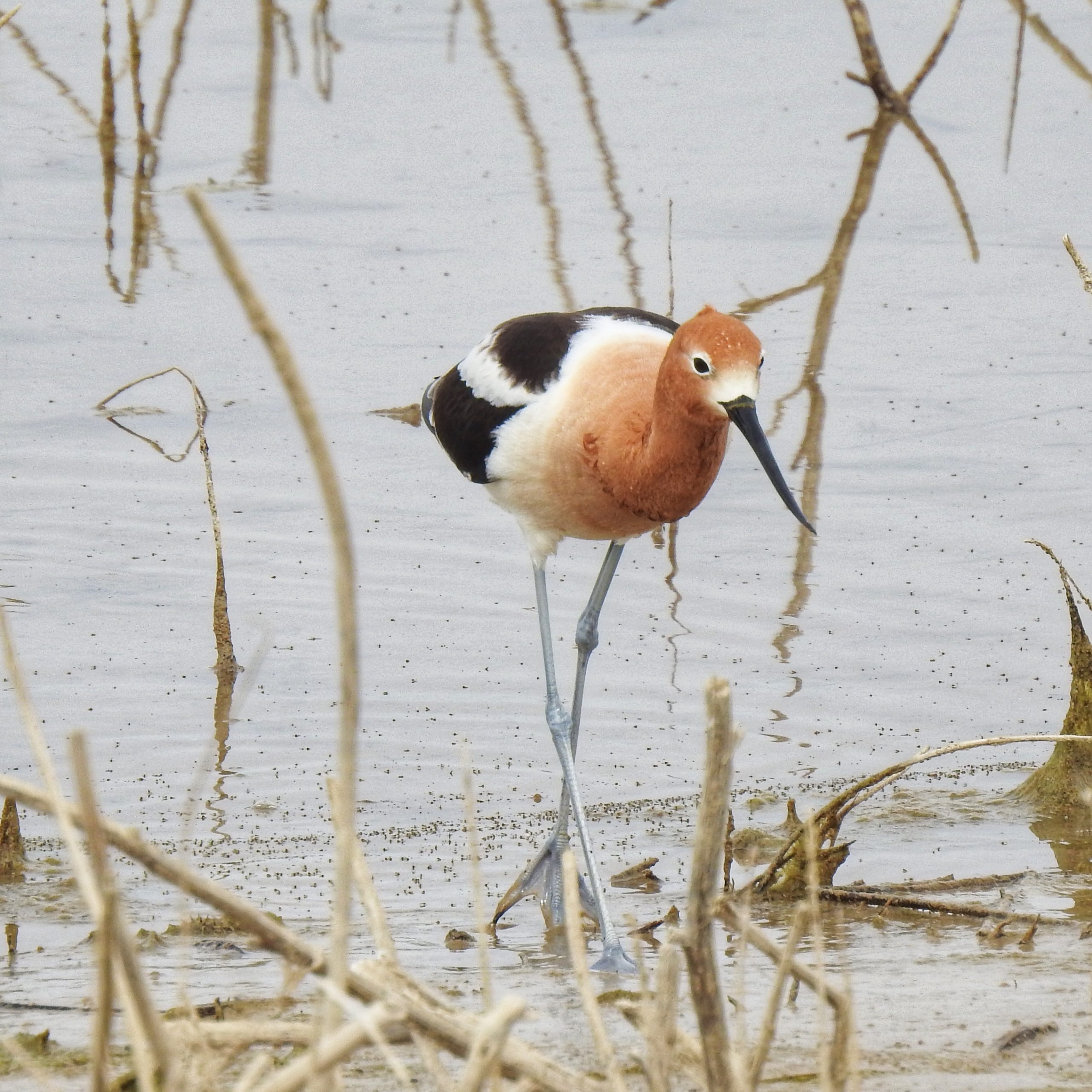 There were a lot more in the neighborhood, including this clump.

Two Marbled Godwits were wading in deeper water. This was my 296th species for my Colorado state list. These things are huge, with a body the size of a Mallard’s. 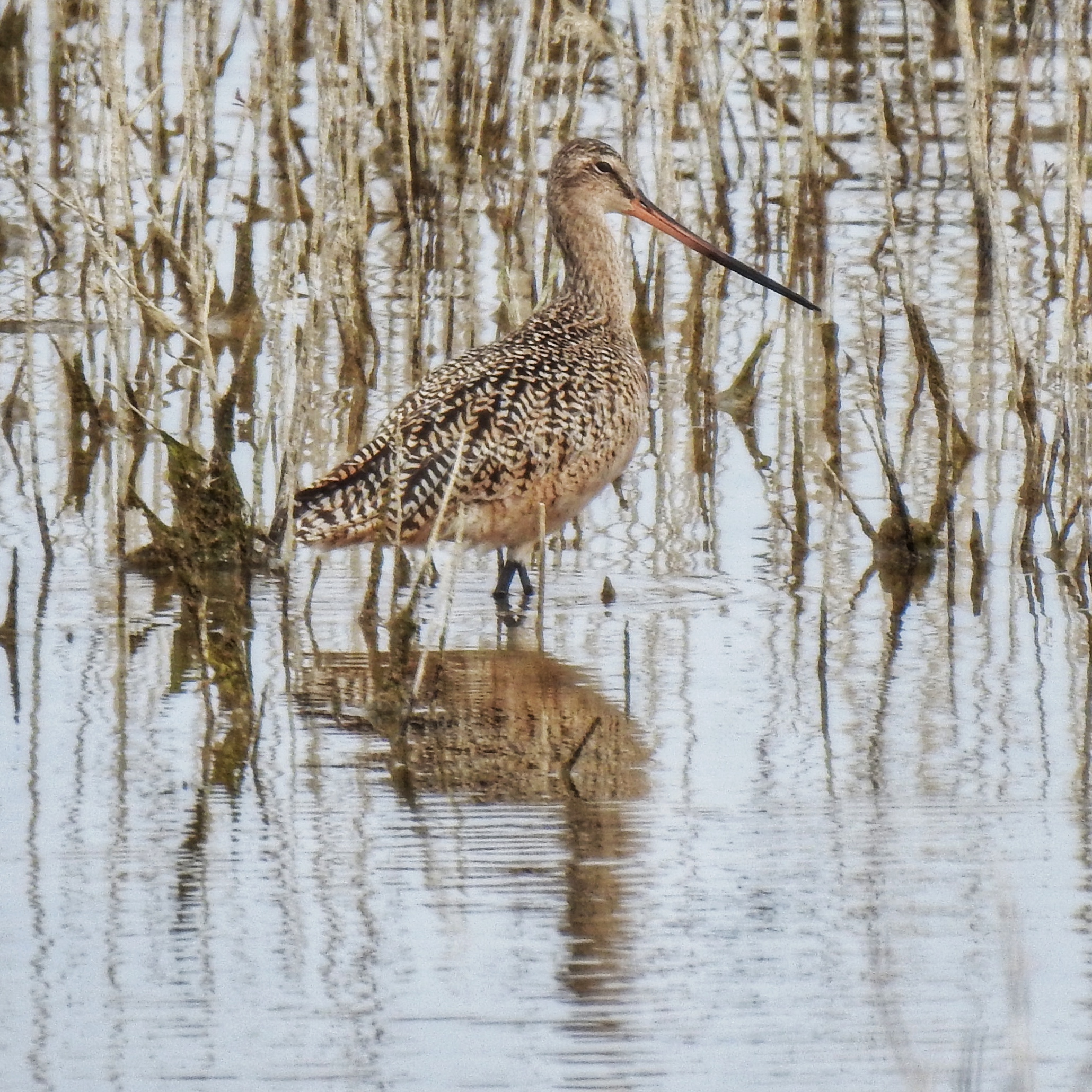 Seven (I think) Long-billed Dowitchers were hidden in the weeds. I include the photo because it’s the best I’ve gotten of them in breeding plumage. 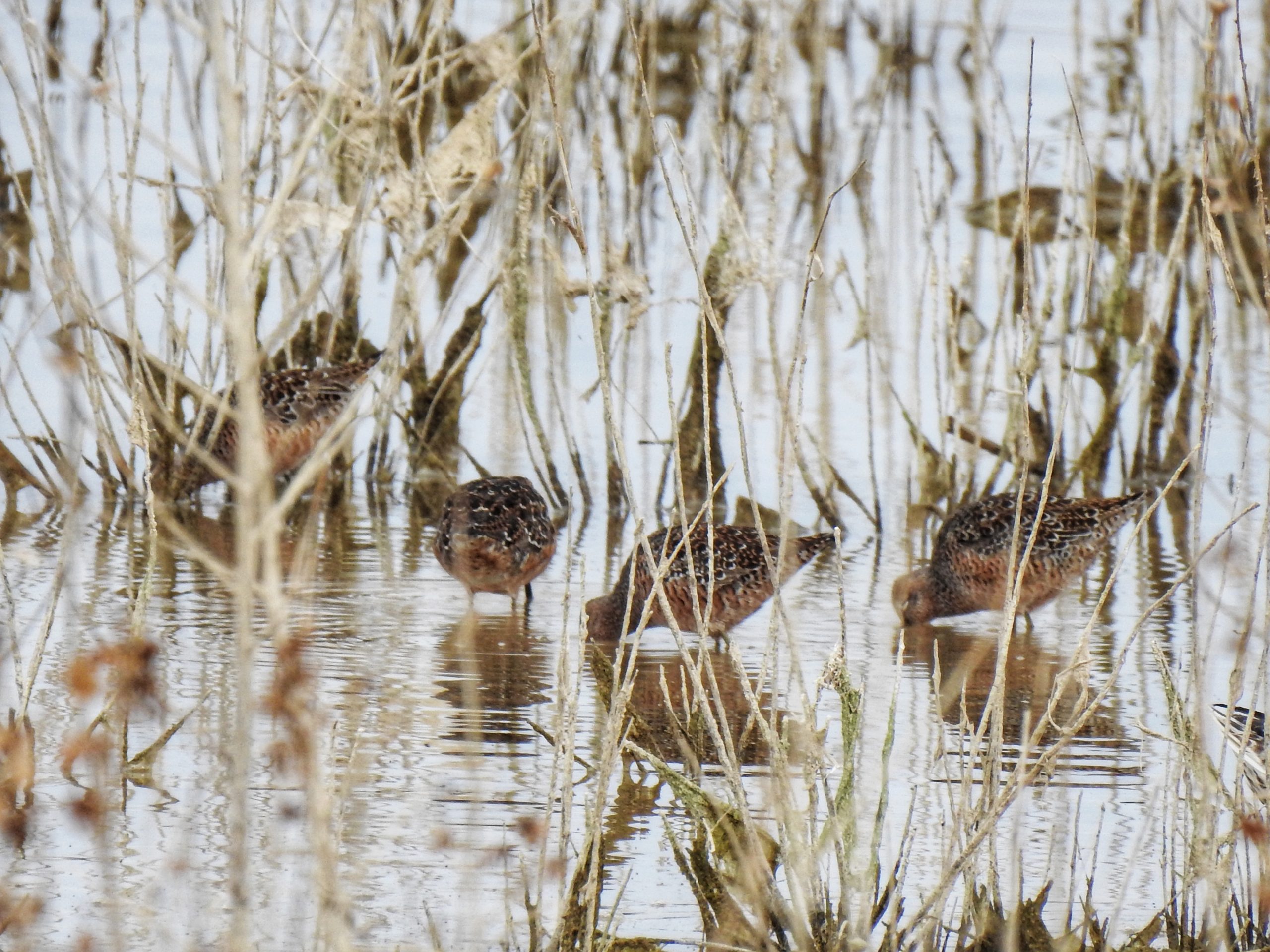 I parked on the far side of the reservoir and walked down near the shore. Even though the light was behind me, from that spot the birds were further off. There were maybe four American White Pelicans on the lake. This was the closest I got to one. The birds on the left are Western Grebes. American Coots are in the foreground. 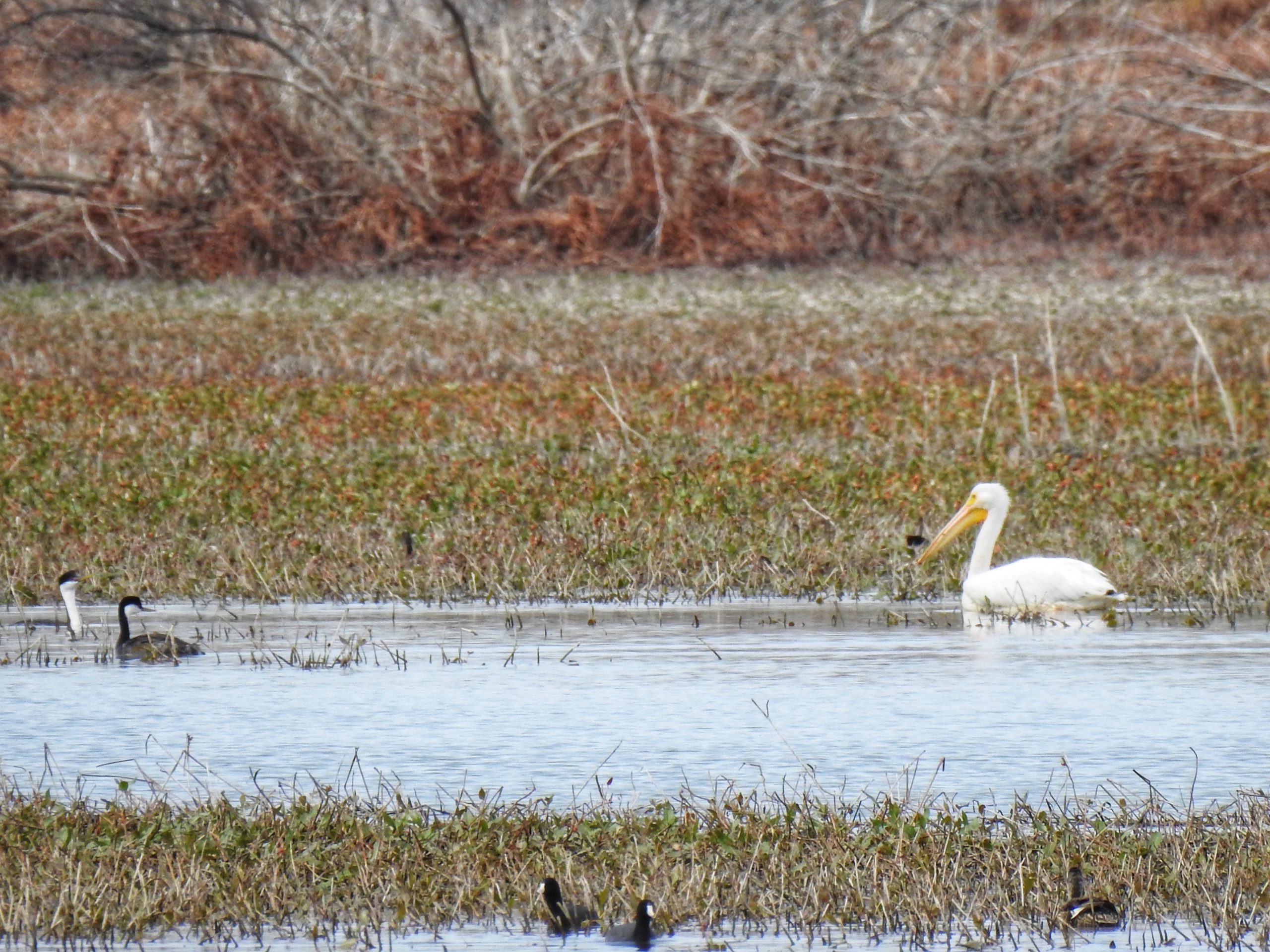 Many more Western Grebes were out further in open water. I also spotted a pair of Clark’s Grebes doing a courtship dance, but they were so far out I couldn’t get a photo. This is the best I could do. You can see the paler sides and the hood that doesn’t extend down to surround the eye. The bill is also brighter yellow. 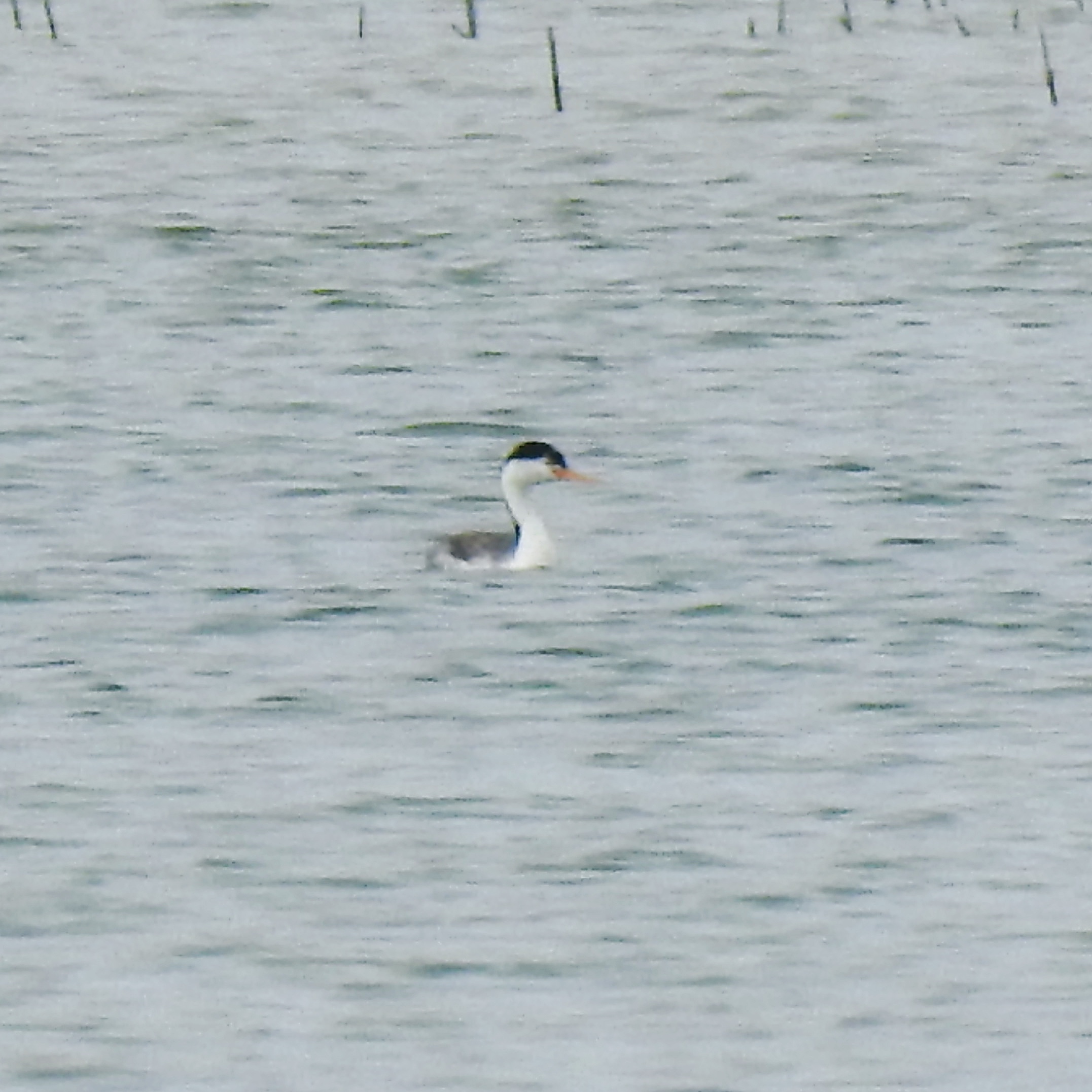 This Rock Wren flew up out of roadside brush and landed on a wire. There were no rocks around, but I have found them in somewhat similar habitats before. They don’t always hang out in canyons. 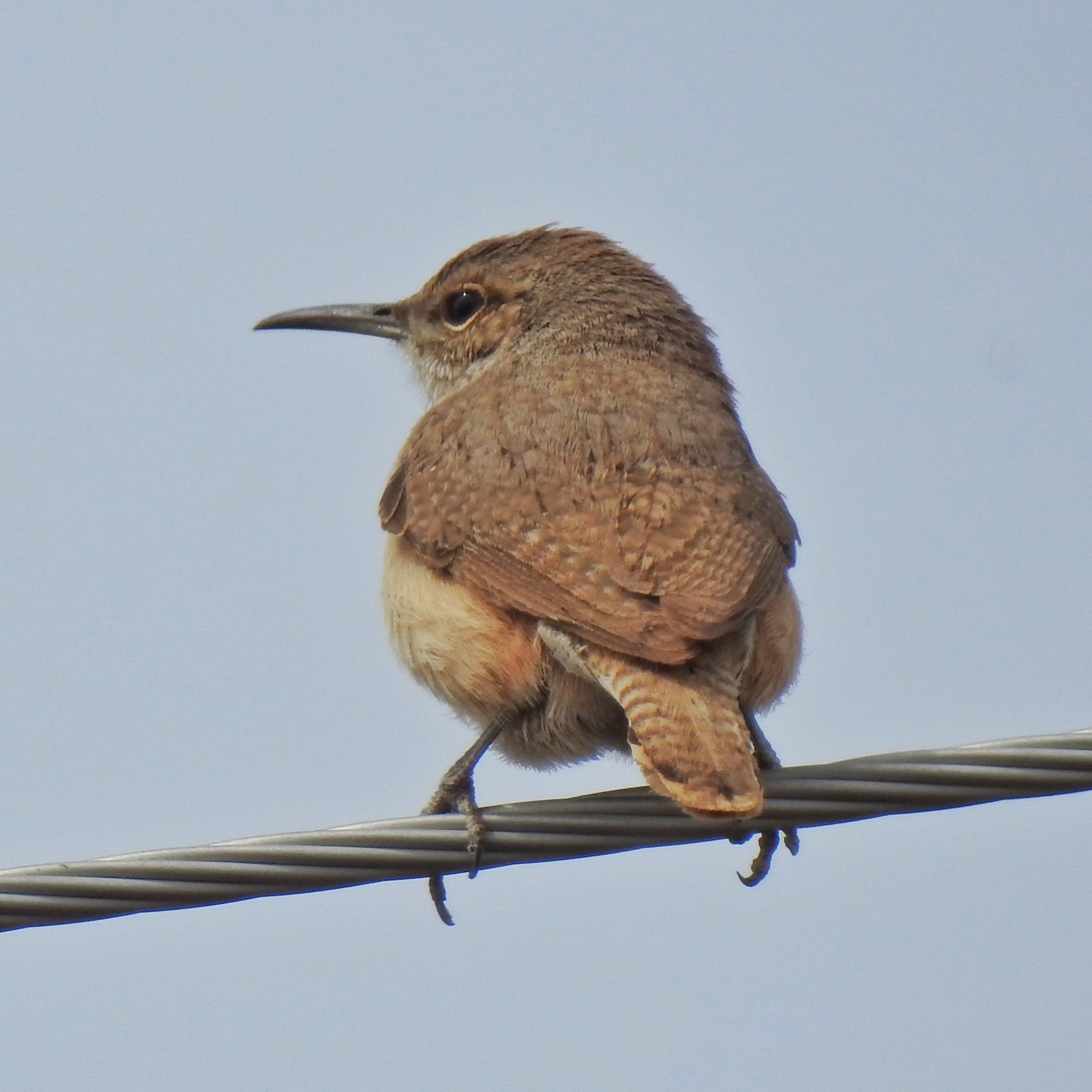 I got very close to this Bald Eagle that was perched in a dead tree along the road, but it was perfectly backlit, so I had to play with filters to get any details. 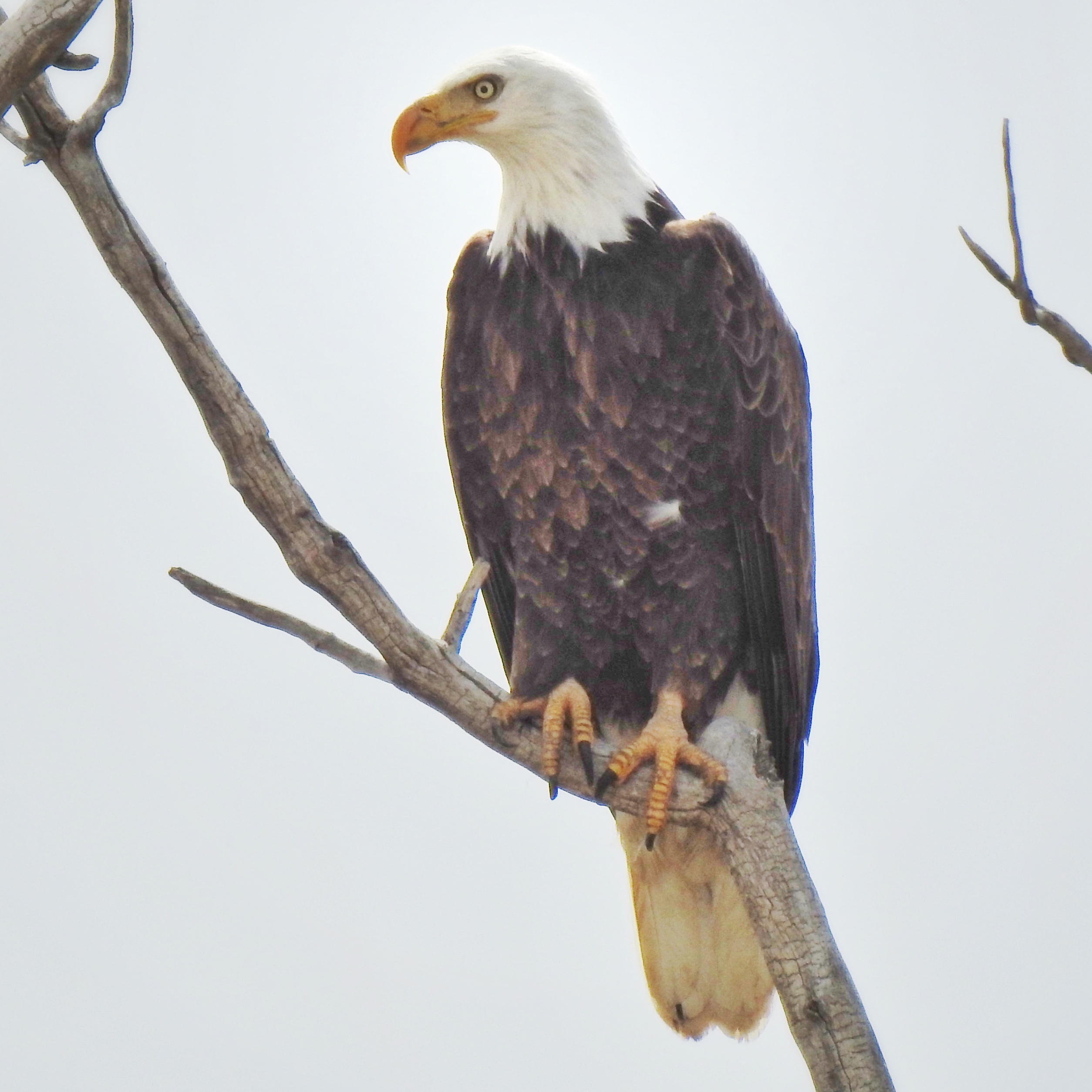 And here, just for fun, is a highly-filtered version of one of my Black-necked Stilt photos. 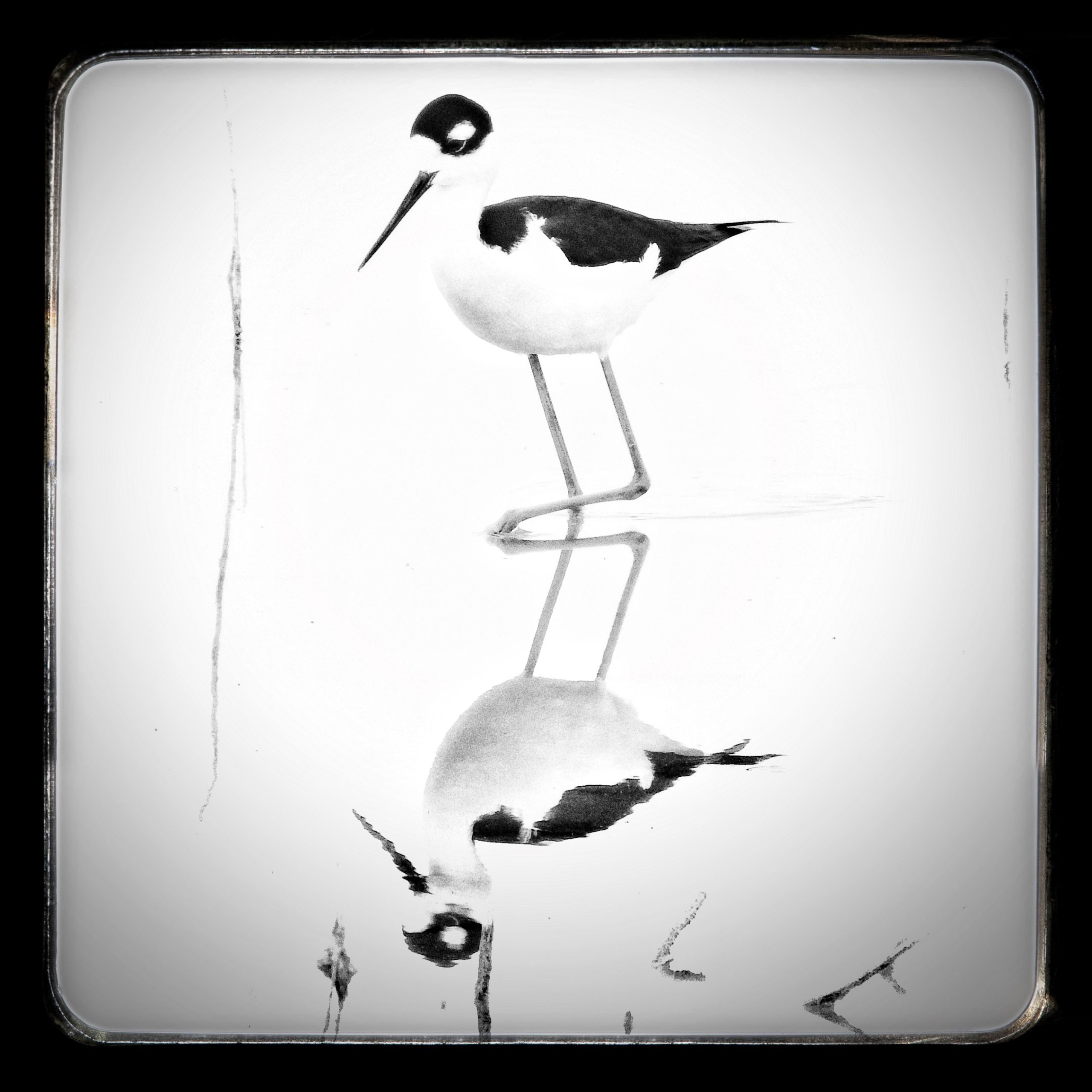 Days like this are why I bird. By myself, tons of birds, many of which I don’t see often. Time to take my time and enjoy and discover. It was four hours of driving for three hours of birding, but it was definitely worth it.