What I knew — He was an actor from the silent film era who was arrested for attacking a girl. I heard his name mentioned several times during the O.J. Simpson trial as in “This is the biggest celebrity murder trial since Fatty Arbuckle.” 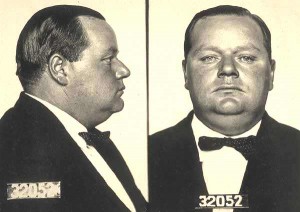 I started at Arbucklemania, an fan site that includes an account of Arbuckle’s alleged rape and murder of Virginia Rappe and the three trials that followed. The site firmly maintains his innocence, as does every other account I could find. It appears that he was a victim of tabloid journalism more interested in selling newspapers than reporting the truth. Although Arbuckle was acquitted, his career was ruined. He was blacklisted in Hollywood for a year and out of movies for longer than that.

He’d been tremendously popular from 1913 to 1921, and had just signed a contract for $1 million a year when things fell apart.

He weighed nearly 350 pounds at one point, but didn’t like the nickname “Fatty.” He was also referred to as “The Prince of Whales” and “Balloonatic.”

He worked with Charlie Chaplin and is said to have discovered and started the careers of Buster Keaton and Bob Hope.

In 1932, he got a second chance. He made a few talking movies that were a big hit. In 1933, he was signed to make a full-length film and reportedly said it was the happiest day of his life. He died that same night of a heart attack at age 46.

I ordered The Forgotten Films of Roscoe “Fatty” Arbuckle from Netflix.

Fatty Joins the Force (1913) — Fatty, out on a stroll with his sweetheart, saves a young 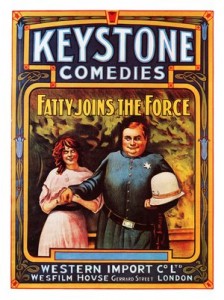 girl who has fallen into a pond. It turns out the be the police commissioner’s daughter. Fatty is rewarded with a job on the force, but soon tangles with a gang of young boys who pelt him with pie. He jumps in a pond to clean off, and the boys cut up his clothes. While half the police search the pond for his body, the other half track down a large wild man who is running about with torn clothing. Fatty is arrested and tossed in jail while his girl flirts with another policeman.

This is comedy? Except for the pratfalls, it was a very sad story. Arbuckle’s acting talent seems to consist mostly of an ability to fall down repeatedly without provocation.

A Flirt’s Mistake (1914) — Fatty mistakes a visiting rajah for a woman and flirts with him. The rajah spends the next 12 minutes chasing him around his home while his wife acts upset.

I watched this one with commentary. Apparently, it was targeted at a 12-year-old audience. The “rajah” shoots his hand gun about 80 times without reloading and without hitting anything except that Fatty does grab his backside twice.

The Knockout (1914) — Fatty challenges the boxing champion to a match. Somehow they end up shooting at and chasing each other around town. The Keystone Cops get involved and everyone ends up falling off a pier into the water.

Charlie Chaplin has a small role as the referee of the boxing match and falls down almost as much as Fatty does.

The DVD had several other films on it, but I’d already had about as much Fatty Arbuckle as I could take. But before I ended my look, I decided to get the DVD of his later work and see if things had improved.

Fatty’s Tintype Tangle (1915) — Fatty is driven from his home by his shrewish mother-in-law. He happens upon a woman in the park, and during an innocent exchange, a photographer takes a picture that looks like the two are flirting. The woman’s husband is a lumberjack, and jealous. He spend the rest of the film chasing Fatty around and shooting at him with two pistols (using an odd shooting method that makes it appear as though he’s throwing the bullets out of the gun).

Things get off to a slow start, but by the end of the short film, Fatty falls down 21 times. I watched this one to give my wife an idea of Fatty’s talent. 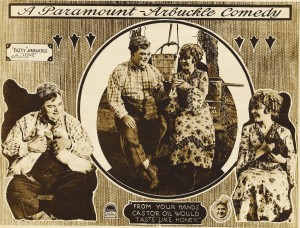 We then watched Love (1919) — Fatty was now working for Paramount, so the production values of this film were higher. The intelligence level, however, was not. This is perhaps the strangest movie I’ve ever seen.

In short, Fatty loves Winnie, but Winnie’s father wants her to marry another man. After a failed attempt at elopement, Fatty comes up with a trick. He laces the cook’s soup with soap and gets her fired, then disguises himself as a woman and gets hired as her replacement. (S)he stands in for the groom at the rehearsal and then, at the actual wedding, tears off his dress to reveal who he really is — and somehow everyone agrees that the rehearsed ceremony was genuine.

The movie I saw mentioned most often in connection with Fatty was He Did and He Didn’t (1916), so I ended with that one.

Fatty plays a doctor. Jack, an old friend of his wife’s, shows up one evening and Fatty gets jealous. He’s convinced the his wife is having an affair. Jack, meanwhile, thinks there is a burglar in the house. There’s a lot of running around and confusion before Fatty and Jack both realize the lobster they ate for supper gave them nightmares.

In addition to a lot of falling down, there were two other things I noticed in these movies. First, whenever somebody got shot, which happened frequently, he jumped in the air, grabbed his butt and then was apparently OK. And in several of the movies there was a scene which actually kinda cracked me up. The female lead would be sitting at her dressing table and try to rest her elbow on the edge. She’d miss, then pull the dressing table away from the wall and try again. It never had anything to do with the plot — it was just a throw-in, but it made me laugh every time.

I also happened upon this cartoon, which is about as funny as the movies. As far as I can tell, it was from a British film magazine called Kinema Comics. The date, September 3, 1921, is only two days before the supposed crime. 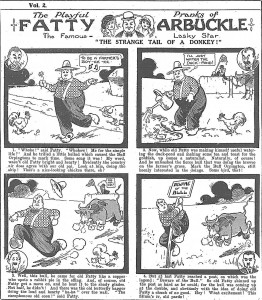 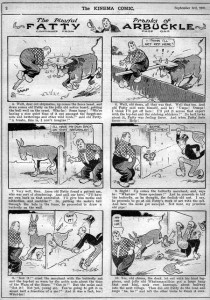 And that’s all I want to know about Fatty Arbuckle. He was almost certainly innocent of the crime he’s best known for, his film career was cut short, he was divorced twice and died young. It doesn’t sound like a happy life.

I’ve seen a lot of Harold Lloyd movies, and a few of Charlie Chaplin’s and Buster Keaton’s. I think they were all far better than Fatty. It’s too bad that he suffered the way he did, but I can’t say I’m sorry there aren’t more Fatty Arbuckle movies in the world. I think we have enough. If you want to see for yourself …