I was pretty sure Costello was the chubby one. I’ve heard “Who’s On First?” so many times that I’m totally sick of it — and I didn’t think it was all that clever to begin with. I had a vague memory of seeing them in some movie once upon a time. My impression is that they’re not as slapstick as Laurel and Hardy.

I started with Abbott and Costello Meet the Internet, a site endorsed by the families of the two comedians. In the biography section, I read “Signed to Universal in 1939, Abbott & Costello reigned as the new “Kings Of Comedy,” producing a solid decade of box office hits including “Buck Privates,” “In The Navy,” “Hold That Ghost,” “Naughty Nineties,” “Time Of Their Lives,” and their 1948 monster classic “Abbott & Costello Meet Frankenstein.” Today, that film remains a favorite among fans, as well as an international cult masterpiece.”

I decided to watch Buck Privates and Abbott and Costello Meet Frankenstein.

The American Film Institute voted this the 56th funniest movie of the 20th century, and in 2007, Reader’s Digest also voted it as one of the 100 funniest movies ever. 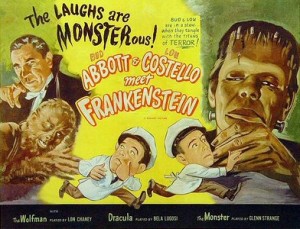 It starred Lon Chaney Jr. as the Wolf Man, a role he’d played in three previous films. Bela Lugosi played Count Dracula, a role was famous for because of an earlier movie. And Glenn Strange played Frankenstein’s Monster, which he’d done twice before. This was an impressive cast.

Although Abbott and Costello are mentioned in the title of the film, their characters had different names. Costello was Wilbur, a bumbling freight handler who had somehow attracted the attention of a beautiful woman named Sandra (Lenore Aubert). Abbott was Chick, who spent most of his time ordering Costello around.

One day, two large crates, containing the bodies of Dracula and Frankenstein’s Monster, come through the warehouse. As Wilbur and Chick ar 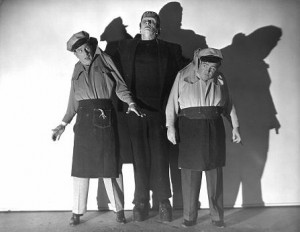 e processing them, they get a phone call from Talbot who tells them not to deliver the crates under any circumstances.

Of course, the bodies aren’t really dead. The monsters emerge and scare Wilbur who tries to tell Chick what he’s seen. But every time Chick looks, the monsters have disappeared. And then it gets silly.

Apparently, Sandra doesn’t really love Wilbur. She’s working with Dracula to replace the brain in Frankenstein’s Monster’s head with one that can be more easily controlled — Wilbur’s. They all bumble their way about a creepy castle for an hour or so until the monsters all disappear (in ways that leave room for sequels).

According to IMDB, there is serious controversy about whether or not this movie fits in the official cannon of Universal’s horror movies. If you vote yes, you have to explain how Frankenstein’s Monster has regained his voice or why Talbot is once again the Wolf Man after he was cured in a previous film. Serious stuff.

But it really brought home to me how humor changes with the generations. Apart from some amusing mugging for the camera by Costello, there really wasn’t anything very funny about this movie — unless you consider watching Abbott yell at Costello funny.  Costello refused to do it at first because it was so stupid, but then $50,000 and a plea by one of his favorite directors changed his mind.

Buck Privates was released in early 1941, after the military draft was instated, but before America was involved in World War II. 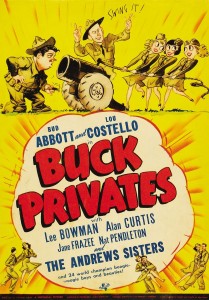 The movie contains several propaganda pieces extolling the Armed Forces and the men who serve.

Slicker (Abbott) and Herbie (Costello) are two con-men who accidentally join the army when fleeing from the police. There are two other main characters, also in the army, a millionaire playboy and his former driver who don’t like each other and are fighting over the same girl. By the end of the movie, they’re best buddies and, apparently, sharing time with the girl. It’s the two of them who furnish what little plot there is.

The movie serves Abbott and Costello as a stage for several of their old vaudeville routines that had nothing to do with the army and could have fit as well in a circus movie or a western. As in Abbott and Costello Meet Frankenstein, Abbott spends most of the time bossing Costello around while Costello plays the fool. At times, there’s a definite Three Stooges feel to it and, in fact, Shemp Howard has a small, and odd, role as an army chef. 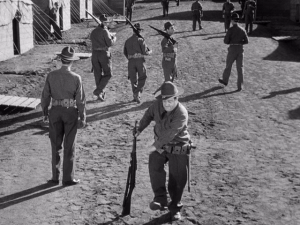 The Andrews Sisters clomp their way through several songs, demonstrating their skill at singing and their decided lack of skill at acting and dancing. This movie soundtrack includes “Boogie Woogie Bugle Boy,” which won an Oscar.

It was more amusing than the first film, although the fact that I watched this one with company probably helped. After it was over, we discussed the fact that, in 1941, the movie industry was only about a decade removed from silent movies and still feeling its way and that most of the audience wouldn’t have been exposed to much sophisticated entertainment. When you take that into consideration, it’s easy to see how this would go over well (it out-performed Citizen Kane and How Green Was My Valley at the box office that year) even though it seems so dated and corny now. 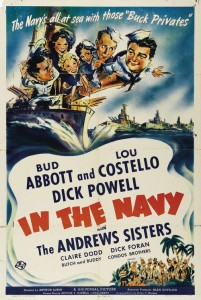 . Like that movie, this one doesn’t suffer from an over-abundance of plot. Dick Powell plays a popular radio singer who decides to join the Navy to get out of the limelight. Claire Dodd is a reporter who insists on following him to get a story. When the DVD quit playing, the two were locked in a food locker on a ship, so I’m guessing they fall in love.

TV — The Abbott and Costello Show

The two had their own TV show that lasted two seasons (1952-1954). They played unemployed actors living in a boarding house, but the show, like everything else they did, was just a stage for their comic routines. All the episodes are available free on the Internet.

Radio — The Abbott and Costello Show

I also downloaded (for free!) several episodes of The Abbott and Costello Show, which was on the radio from 1942 to 1948.

I also read quite a bit about Abbott and Costello on the Internet, and I have now decided that I know as much about them as I want to.

Costello made the team. His wise-cracking, bumbling character was fun to watch. Abbott was the straight man, and I understand that this means he had to behave in a certain way, but most of the time his character came across as an unlikeable jerk. I’m not sure he brought anything to the show that any actor with a sense of comedic timing couldn’t have provided. They were at their best when doing their verbal-sparring routines. When they got into physical humor, I wasn’t very amused. I can understand why they were popular in the 1940s — when movies were often the only popular entertainment available. But they did the same bits over and over again. For example, Who’s on First? was performed on vaudeville, in a movie, on the radio show and on an episode of the TV show. And they probably suffered from over-exposure, as Universal put out two new Abbott and Costello films a year and released a couple of the old ones while at the same time, the pair were doing their radio show.

Worth the time? — They kept my attention and were good for an occasional chuckle.