On our way north from Fort Scott to Kansas City, we passed the Mine Creek Battlefield but decided not to stop. But a few miles further on, when we passed the turnoff for Marais des Cygnes, I couldn’t resist. There was no trail and no museum. It was just a spot. We could zip over, take a few pictures, and zip back, and we had just enough time to do it.

We soon began to wonder what we’d gotten into. We headed down a narrow two-lane country road past a giant cowboy statue. 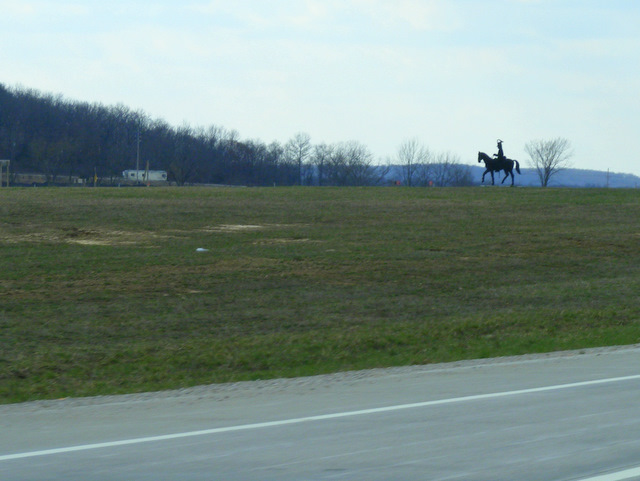 We turned left onto an even narrower dirt road through farmland. Then we turned right on another dirt road. My wife asked me if I could find my way back. I told her it would be no problem. I’d just turn left at the dead skunk in the middle of the road. 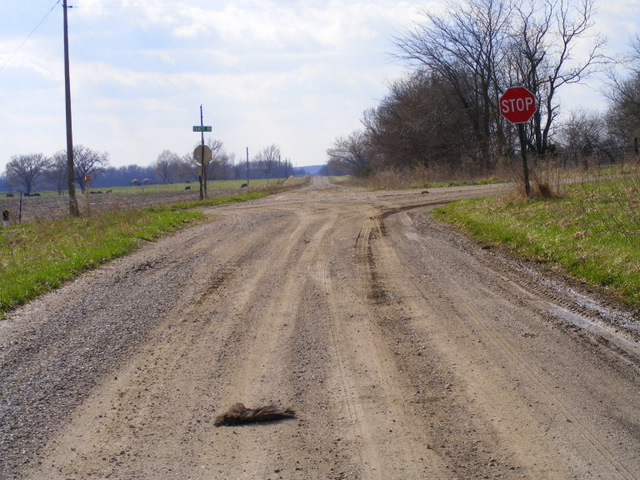 Another turn took us down yet another dirt road through cow pastures. It was the worst of all, in places nothing more than two muddy ruts. When we got to the entrance to the park, we had to drive down a steep hill that was crossed by a deep ditch.

The park was set up with a series of signs along the “road” that we could read without getting out of our car. (In fact, my daughter never did.) Here’s what we read on the way in. (You can click to enlarge these.) 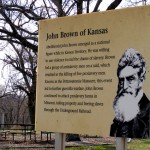 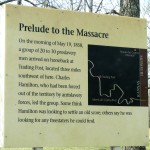 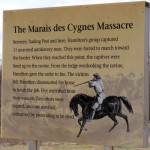 Near the massacre site, the road dipped down another steep slope to a muddy turn-around. We opted to park at the top and walk down. There was a small cement enclosure with a base for a sign that had been broken off. 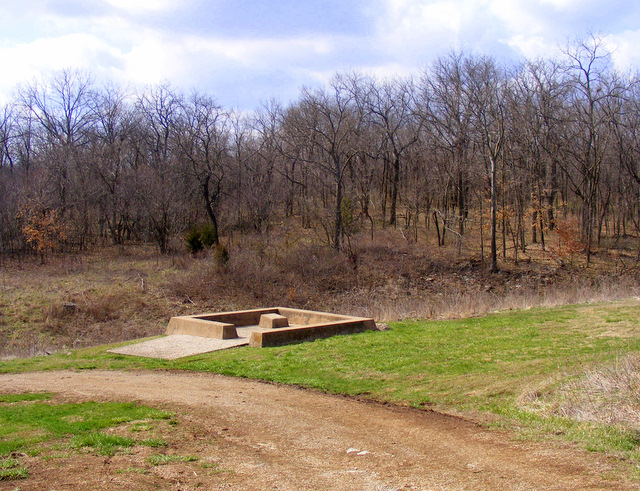 A few minutes later, I discovered the sign propped on the back porch of a house. 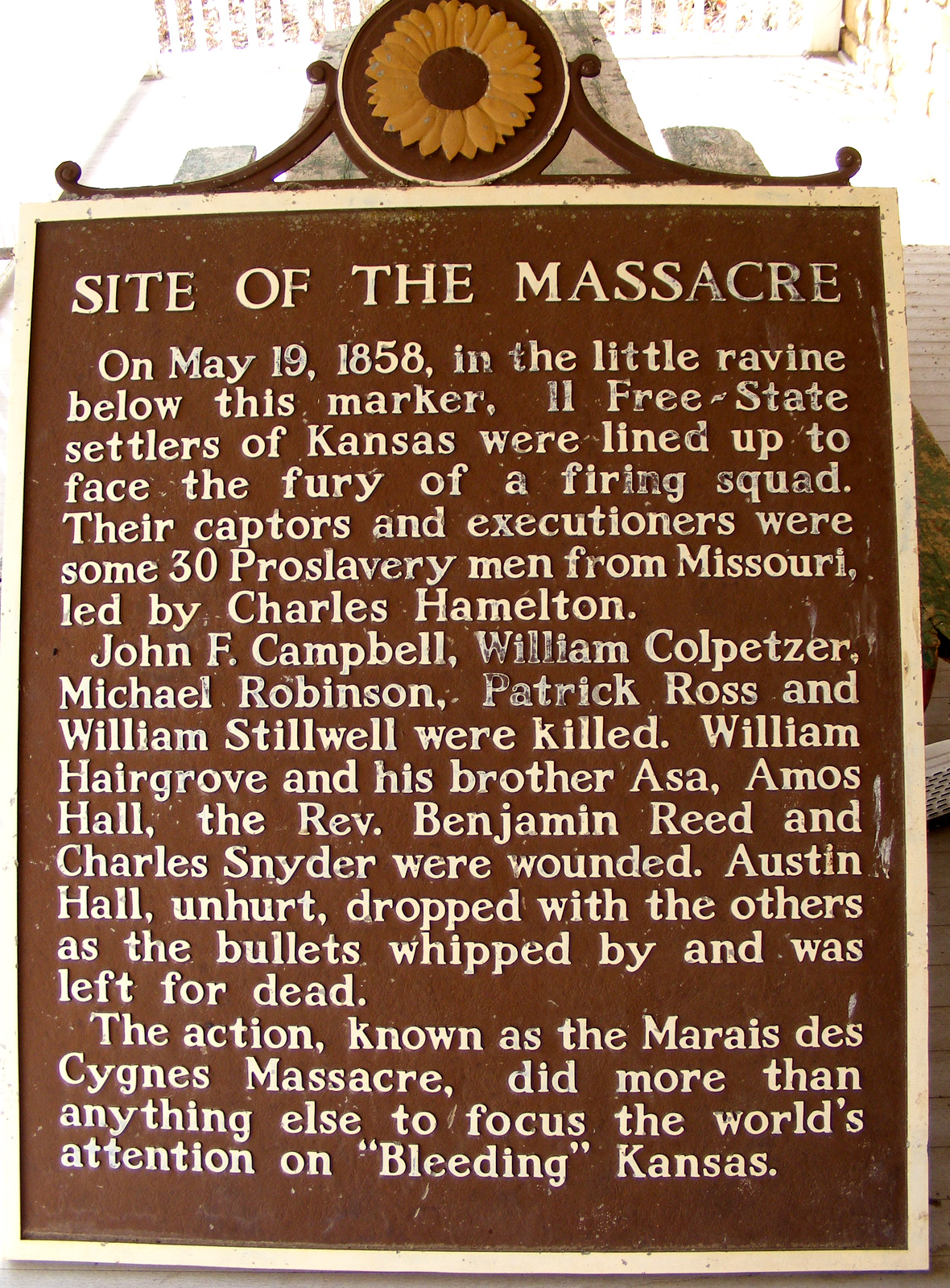 Here’s a pan of the ravine itself.

And a woodcut of the massacre that appeared in newspapers shortly after the event.

There were more signs on the way back out. 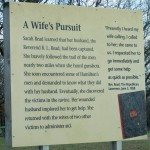 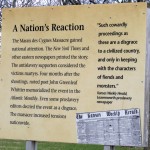 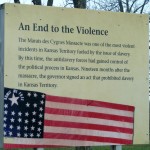 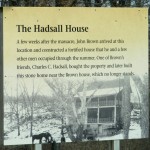 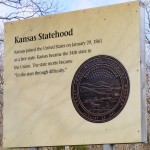 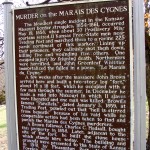 I got out of the car to look at the house. It was locked, but through the window I could see that it was occasionally used as a visitor center for school groups and such. It was built on the side of a steep hill, so in the front it appeared to have just one floor. 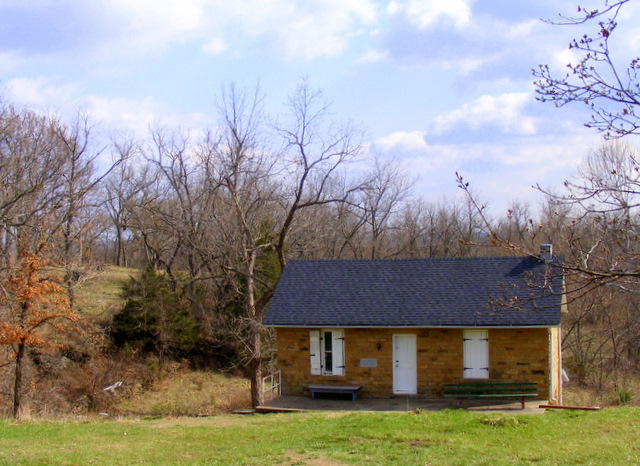 But when I climbed down the stairs to the back, I saw this: 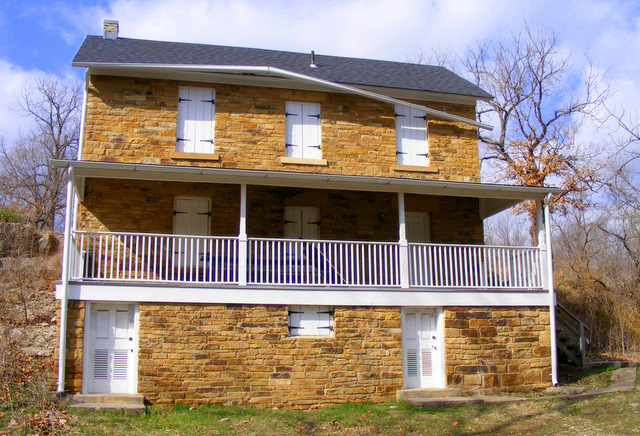 Our biggest adventure occurred on the way out. My fully-loaded car didn’t quite have what it took to get up the steep entrance and through the ditch. Others had driven across the grass to escape, but that was was now very muddy and didn’t look promising. 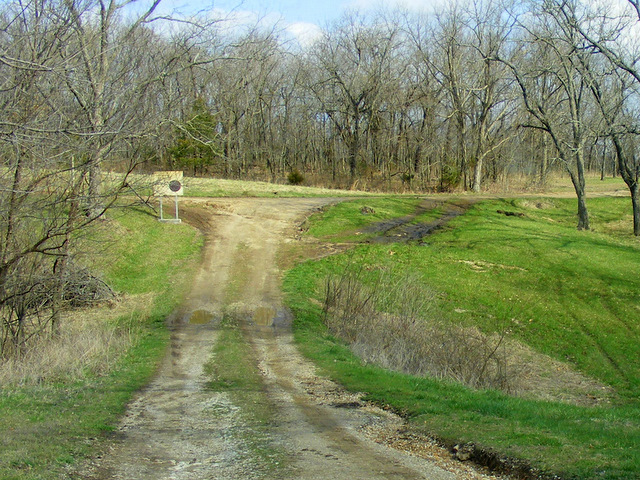 As my wife and daughter panicked (sorta), I backed back down and put the car into four-wheel drive; the first time I’ve had to do this in the 10 years we’ve owned it. This time, it climbed up and out with no trouble whatsoever.

OK, so there wasn’t much to the place — and it wasn’t that exciting an adventure. But it was a fun half-hour, and we were soon back on the road north.

Oh, and Marais des Cygnes … I learned that it means “Marsh of the Swans,” but I never did learn how to pronounce “Cygnes.”