When we first arrived at Plimoth Plantation,  I stepped up into the back seat of my parents’ car and smacked the crown of my head into the door frame. Hard. Very hard. Enormously hard. I staggered, let out a yell, and fell inside the vehicle. My heat hurt. Really hurt. Enormously hurt. My family was walking into the visitor center, so I grabbed my camera. At the last moment, I decided to take off the zoom lens and put on my regular lens. In my stupor, I put it on upside-down. It took a considerable amount of twisting and pulling to get it back off. I put it on right and took off.

I caught up with my family just as they found out how much it cost to enter — $15 for adults, $10 for kids. Dad decided not to go in. I decided that we go in together or not at all. The lady behind the counter heard our discussion and said she’d let my daughter in for free. That cinched it, and we all went in.

As we entered the stockade, I decided to take a photo down the main thoroughfare. I pushed the button. Everything flashed, then went black. I thought I was out of film and tried to put in another roll, but I couldn’t advance the frame. It was broken. I was on the vacation of a lifetime, and I didn’t have a camera. I took a lot of video, but I was depressed. And my head still hurt. 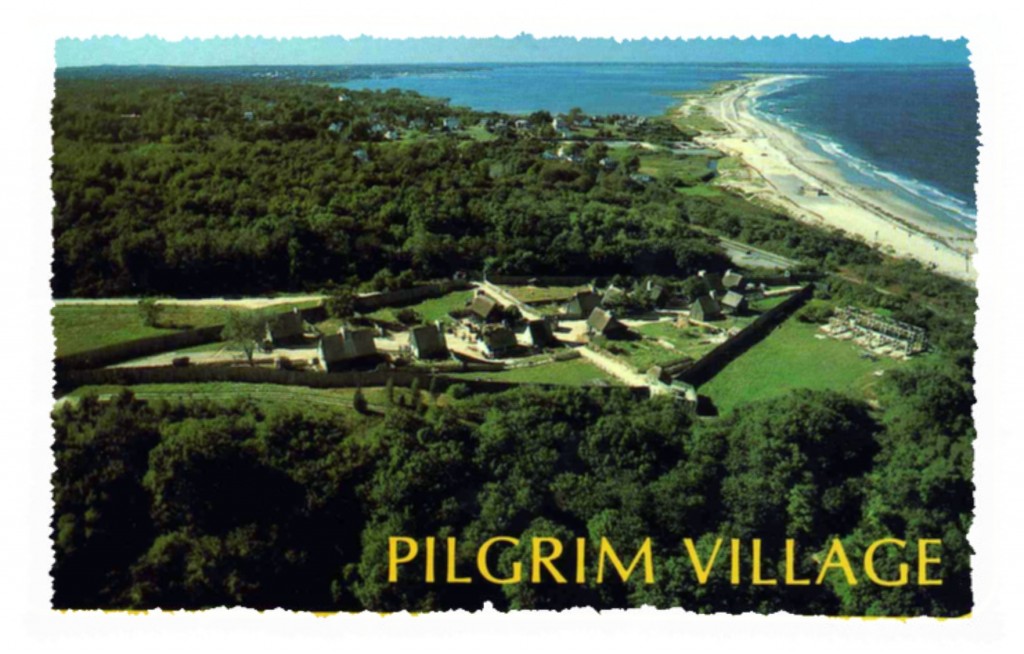 Enough complaining. Plimoth Plantation has an interesting gimmick. There are no interpretive signs or displays in the village. Instead, the employees each take on the role of one of the original Pilgrims and play the part. It is the year 1627, and they go about doing what the settlers would have been doing. They speak in English accents and only answer questions in character. If you ask them about anything that took place after 1627, they profess not to understand. At times, this gets a bit silly. I heard one of the “Pilgrims” ask a tourist where she was from. The tourist answered, “I’m from Australia, but of course you don’t know where that is.” 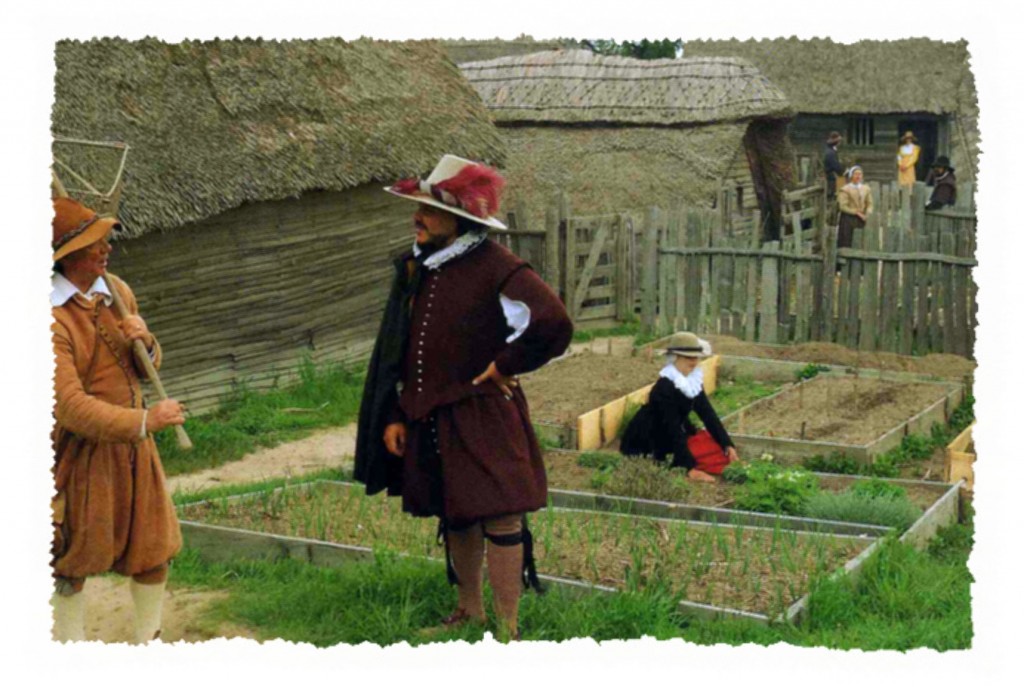 I bought some postcards, but they don’t show the village very well. This one is the best. You can get a good idea of what it was like with one exception — or rather 501 exceptions. To get a real feel, imagine every available space filled with running, screaming, giggling girls between the ages of 10 and 13. Girls from 1992, not Pilgrim girls. The place was a zoo.

Because they were striving for realism, all the houses looked very similar inside and out. The re-enactors were the show, but wherever there was a Pilgrim, there was also a ring of tourists. This rather dulled the realism for me. We wandered through the town looking into the houses while my daughter chased every chicken in sight.

When we had seen about all there was to see, Dad decided to have some fun. We entered one of the houses. (I kept feeling that we, in keeping with the 1627 mentality, should have been knocking before entering.) A young woman was sewing before her fireplace. Dad began asking her questions about dating and courtship, whether her marriage had been arranged by her parents, what the role of women was in the society. Dad was phrasing his questions in such a way that she couldn’t just give facts but had to answer conceptually, drawing on what she knew of Pilgrim life. He was being sneaky and a bit nasty (in a friendly way), trying to trip her up. But she was very good. She kept up with him and never stepped out of character or missed a beat. My wife and I were back in a corner laughing because it was obvious Dad had met his match. He was impressed too, and after a while allowed her to steer the conversation to more standard topics. The discussion went on for maybe 20 minutes, and by the time we left the tiny (15 x 15) house was packed with tourists listening in with fascination.

We left the stockade and walked through the Indian village. The Indians weren’t in character. They’d answer any question about anything that happened prior to 1992. After that, they professed not to know. My daughter wandered into one of the huts and didn’t come back out. I went to find out what she was up to and discovered her just standing there with two Indians. They invited me in, but I politely declined. We stopped in the bookstore and spent a lot of money, then went back into town where we toured the Mayflower and saw Plymouth Rock. 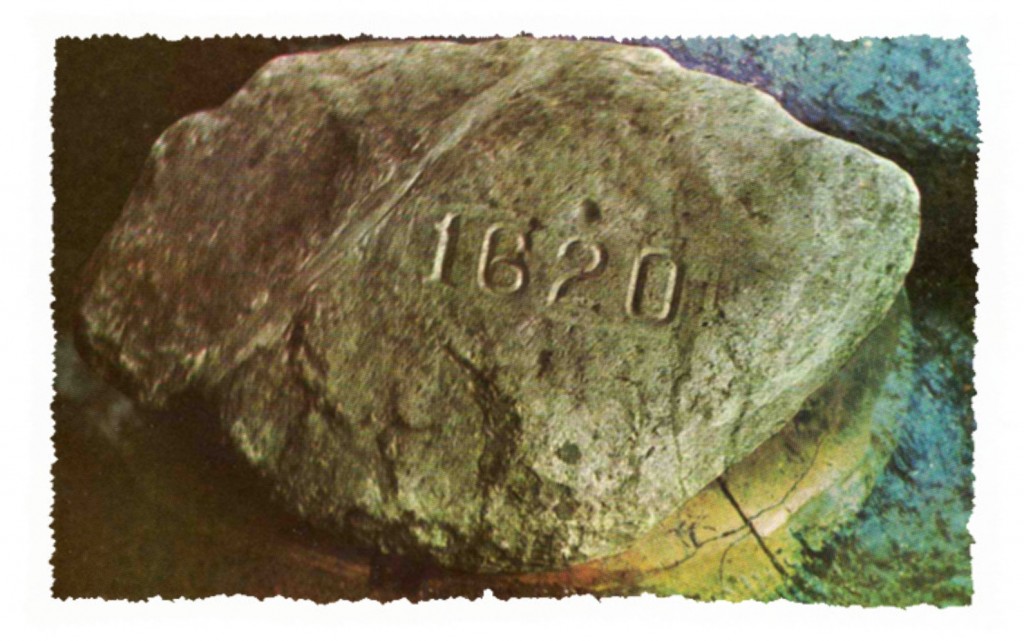 The Rock is one of the sillier historic sites in America. It’s a rock, lying in mud, surrounded by a massive pillared monument. But unlike Plimoth Plantation and the Mayflower, it wasn’t crowded. In fact, we had it all to ourselves. As I gazed upon the rock, I pondered what a remarkable coincidence it was that the Pilgrims landed on the one rock in all of North America that actually had the number “1620” engraved on it. We didn’t stay long.