I rode down to Cincinnati early in the day with several friends. We spent the day sightseeing and went to the Reds game in the evening — after eating a dinner of Cincinnati’s own food specialty, Gold Star Chili (made with cinnamon and very good). It was raining hard much of the afternoon, but let up about an hour before the game began.

Three of us walked across the famous Roebling Bridge (the first bridge to span the Ohio River) to Covington, Kentucky and wandered around a bit until game time. Here’s what Riverfront Stadium looked like from Kentucky.

And here’s what Covington, Kentucky looked like from the park, with the Licking River entering the Ohio on the left. 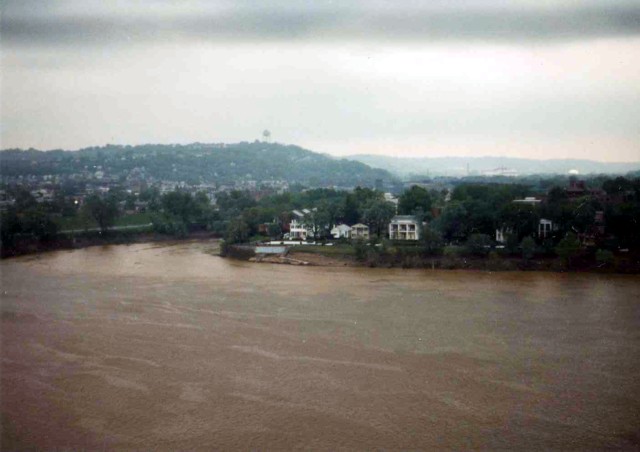 Our seats were in the upper deck down the first-base line. There weren’t a lot of other people up there with us.  Before the game started, I tried to walk all the way around the park in the upper deck, but an usher yelled at me and told me I couldn’t go beyond the foul pole. 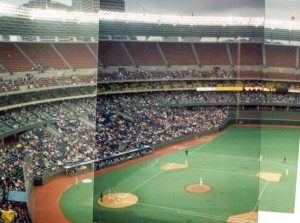 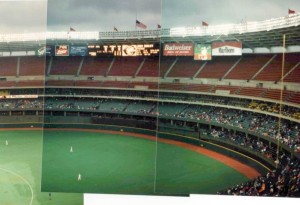 The game was pretty exciting, but I didn’t care who won. We had fun watching a flock of Purple Martins chasing moths in the glow from the lights. As soon as a moth would get a certain distance out from the overhanging roof, the martins would swoop down. The moths would try to get back to safety, but usually didn’t make it. 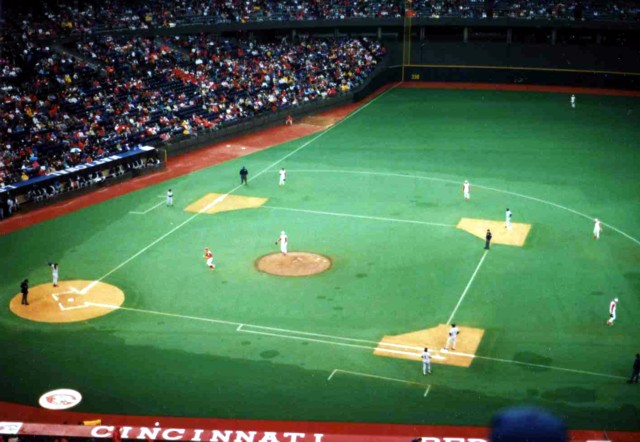 When the Reds hit a home run, they shot off fireworks over the Ohio River. Just to be sure we knew what was going on, they also showed fireworks on the scoreboard. This was the most boring ballpark I’ve ever been in — the only indication that it was the Reds’ home park was the “Cincinnati Reds” on the home dugout.

Although the park was dull and we didn’t care who won, we had fun. During the first inning, I noticed the scoreboard said, “John Smiley pithed a complete game shutout.” We made fun of that all night, and one of my friends yelled, “We want a pither, not a belly ither.” The game was hilarious — full of errors, bad plays and weird occurrences. The Reds eventually won 11-7.