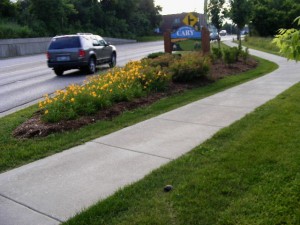 I strolled across the Fox River to Fox River Grove to take photos. On the way back, I spotted this small turtle in the grass right next to the sidewalk. (It can be seen in the foreground of the photo on the right.) It allowed me to take close-up photos and even pick it up. It backed into its shell and made no attempt to fend me off.

I make a point of that because the turtle was a Stinkpot, one of the musk turtles. Two of the things it’s known for are biting and emitting foul-smelling fluid from glands under its shell (hence the name). This turtle did neither, which was fine with me. 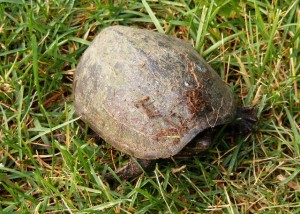 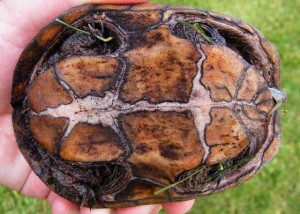 A backwater of the Fox River was perhaps 40 yards away through some scrubby woods, so finding a turtle in the general area wasn’t a total shock. I suspect it was looking for a place to lay its eggs (which would, I suppose, make it a female).

I noticed two things about it right off. First, its shell was filthy. Second, it looked very sad. 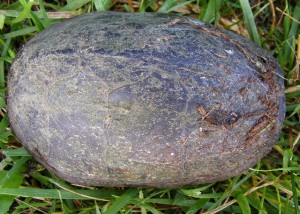 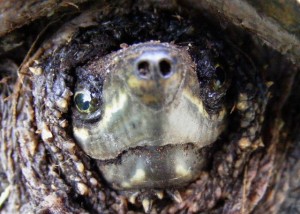 So I grabbed a leaf off a nearby vine and gave the shell a spit polish. As you can see, this made it a very happy turtle. I think. 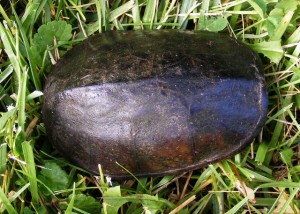 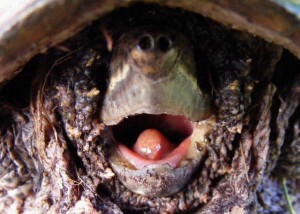 After subjecting it to all this abuse, I put it down near where I found it, but pointing away from the road. In the 15 minutes that I watched, it did nothing whatsoever.

Stinkpots rarely leave the water, except to lay eggs and occasionally to bask on waterside logs. They’re also known for walking on the bottom of ponds and streams instead of swimming. One of my books says, “If a turtle ever falls on your head … it probably will be this one.” That’s because, with their small shells, they can get higher up into trees. This one is probably full-grown. They rarely grow more than five-inches long.