I was exploring three Kane County forest preserves that I’d never been to before. Burnidge was the third and, potentially, the best for birds, although things were very slow today.

I was walking a trail through brushy woods along the edge of a brush field. I saw this snake lying motionlessly on the trail. It was tiny, maybe six inches long. It was a pale flat brown overall with a dark brown head and a wide stripe down the center of its back that was a shade lighter than the sides. There was a double row of tiny dark triangle spots along the edges of this center stripe, with thin dark lines connecting some of the dots. Its underside was creamy white.

When I bent over to look at it, it moved toward the side of the trail. I put my foot in front of it to get a better look. It flattened out and coiled the front half of its body into a severe “S”. I tried to flip it over gently with a stick to get a look at its underside. It tried to get away when it saw a chance, and coiled when it didn’t, but it never struck. I was finally able to lift it by one of the coils and see the underside. At about that time, I heard two people and a dog coming along the trail, so I let it get away. As soon as it reached the side of the trail, it crawled beneath the leaves and disappeared. 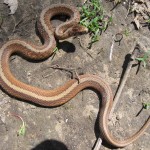 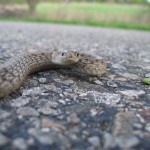