The Longest Day of My Life

Lindy and Andrew dropped us off at the Stuttgart Airport about two hours before our flight home. It was sad to leave. We had a great time with them and they were excellent tour guides. But the knowledge that we’d see Lindy again in a month and Andrew in three months made it easier.

We had to weave our way through baggage check, check-in, security, passport checks and several other checks. By the time we’d gotten to our gate, I’d shown by boarding pass and passport to a whole parade of people. We stopped at an airport cafe on the way for breakfast. I just got a muffin because my throat was excruciating. Sally had some sort of egg torte thing. And I had a warm Diet Coke.

Again we had to bear with Delta’s slow boarding system. And this time it was exacerbated by the fact that a plane with mechanical problems was parked at our gate. We had to take a shuttle out to the tarmac somewhere and walk through the rain to our plane. 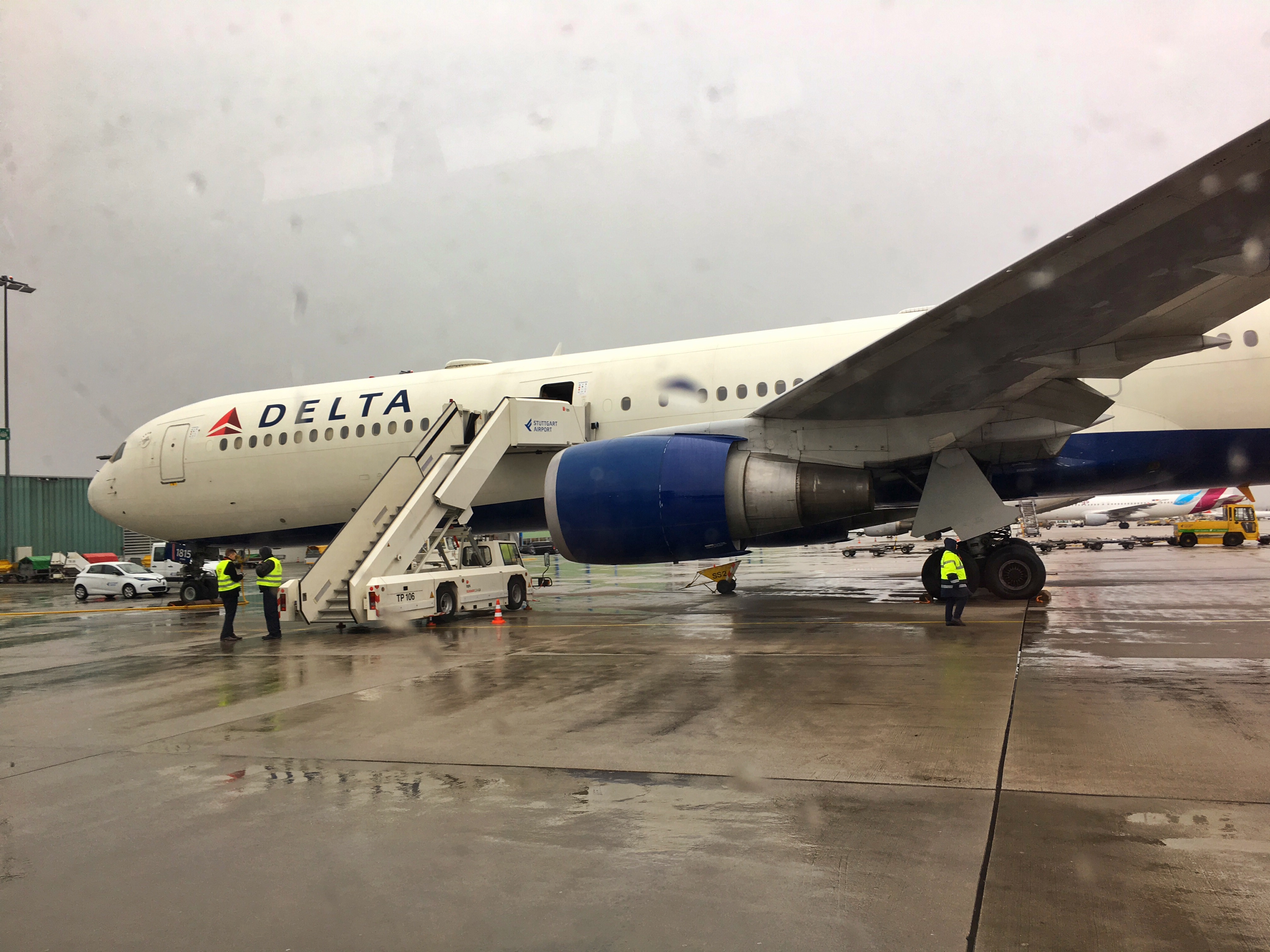 I was hoping to see more of Europe out the window, but we were soon above the clouds. I was exhausted, not having slept at all well the previous two nights. I took a little bit of a nap, but the seats on the plane were so upright that there was no way to support my head. This was an older plane. It had the seat-back screens, but the movie options were very limited. I watched The Catcher Was a Spy and Instant Family, pausing regularly to close my eyes and wish I was anywhere else. We were served a hot dinner. I chose ravioli. I really don’t remember much about it. 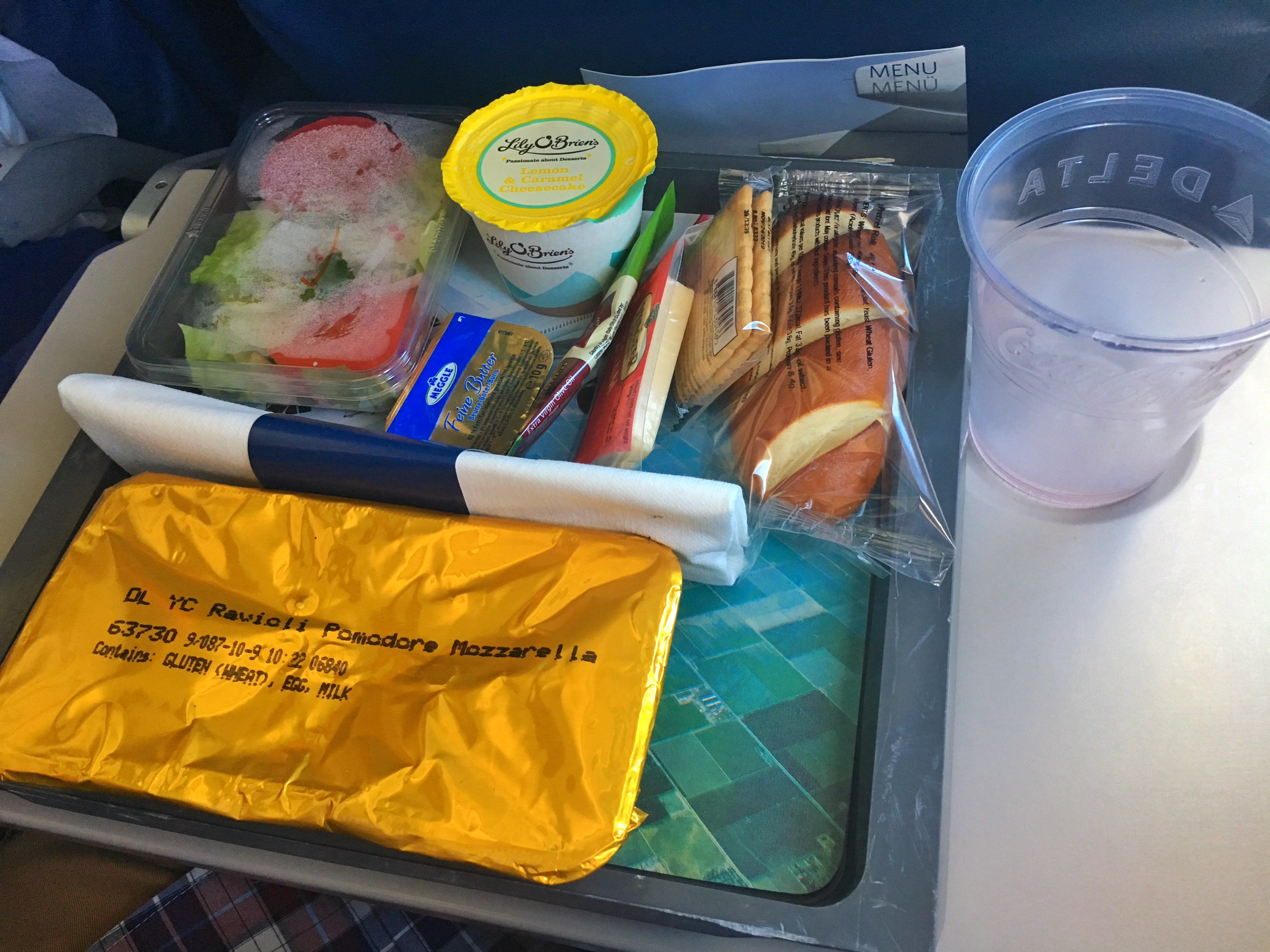 There was one highlight on the trip. I glanced out my window and saw water below. We were over the North Sea. I watched as the English coast approached. As soon as we were over land, the clouds began increasing again, and the view was soon blocked. But for about 10 minutes, I saw England.

We came in over the Humber River. I was able to identify the point of land on Google Maps. 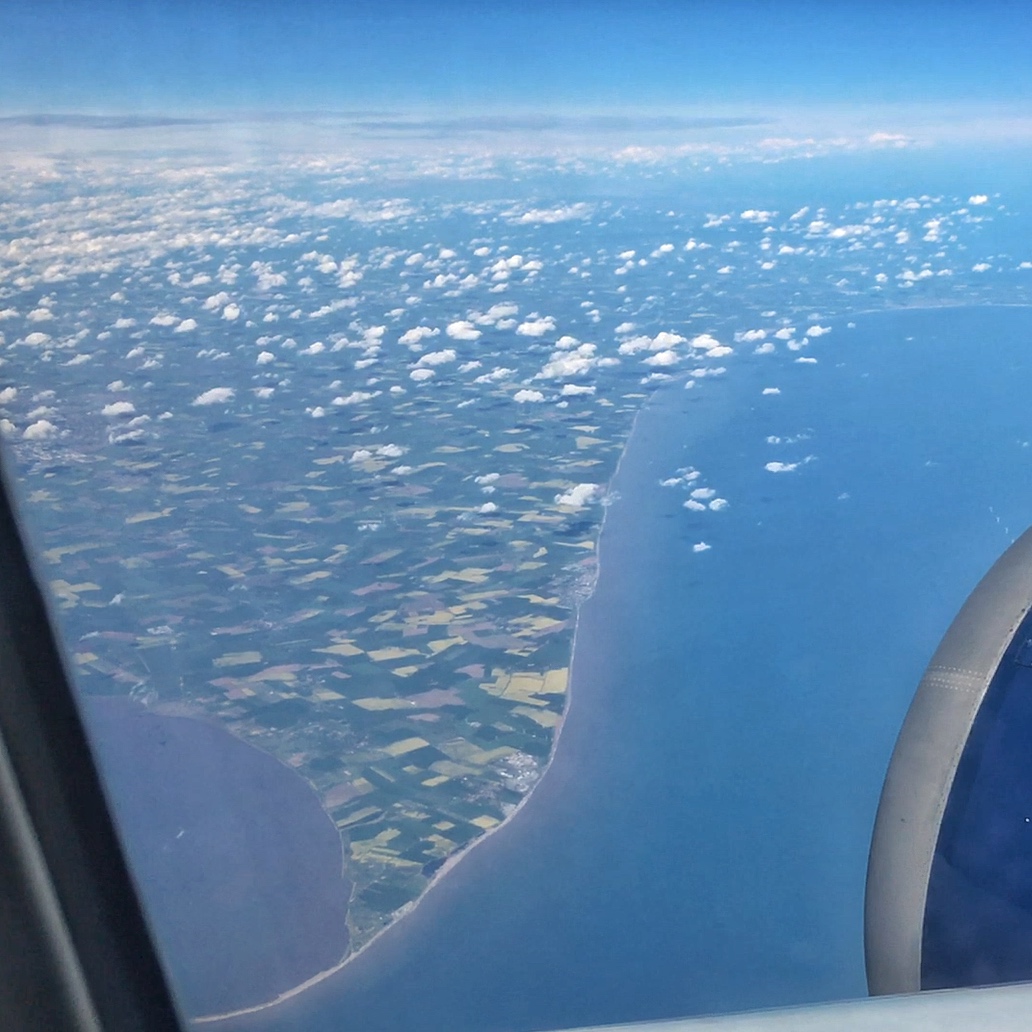 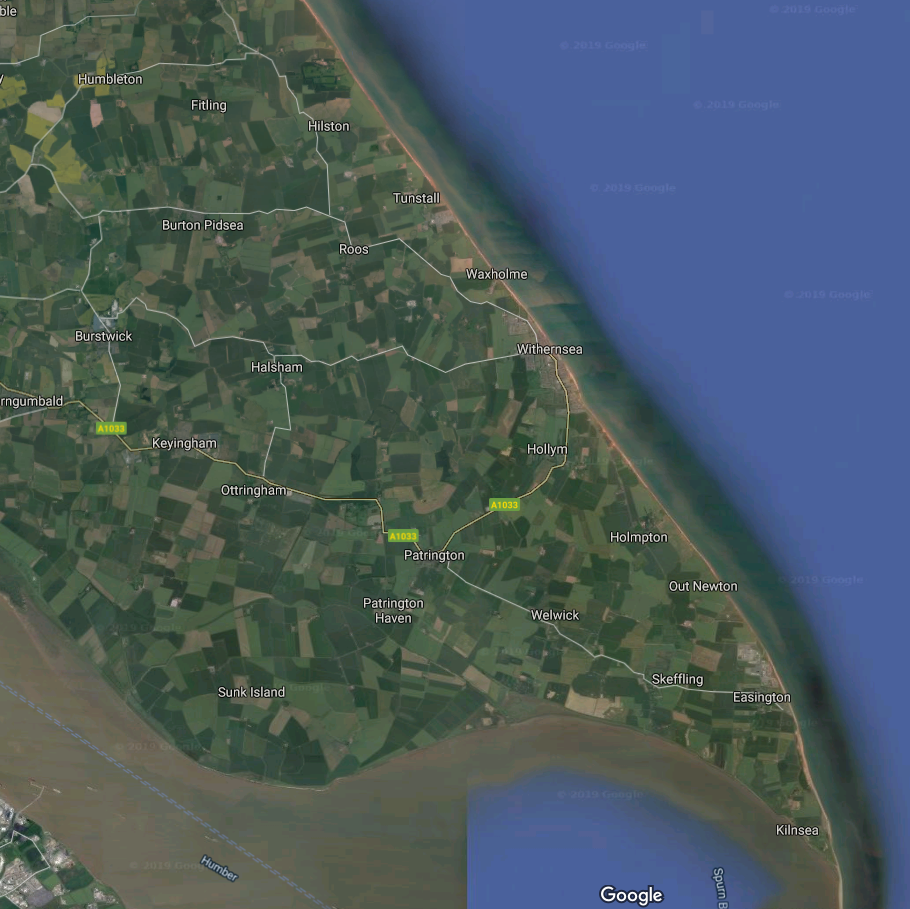 I took this shot further inland along the river. That’s the city of Hull on the north shore. The white horse-shoe shape visible in my photo and on the Google photo is a stadium. 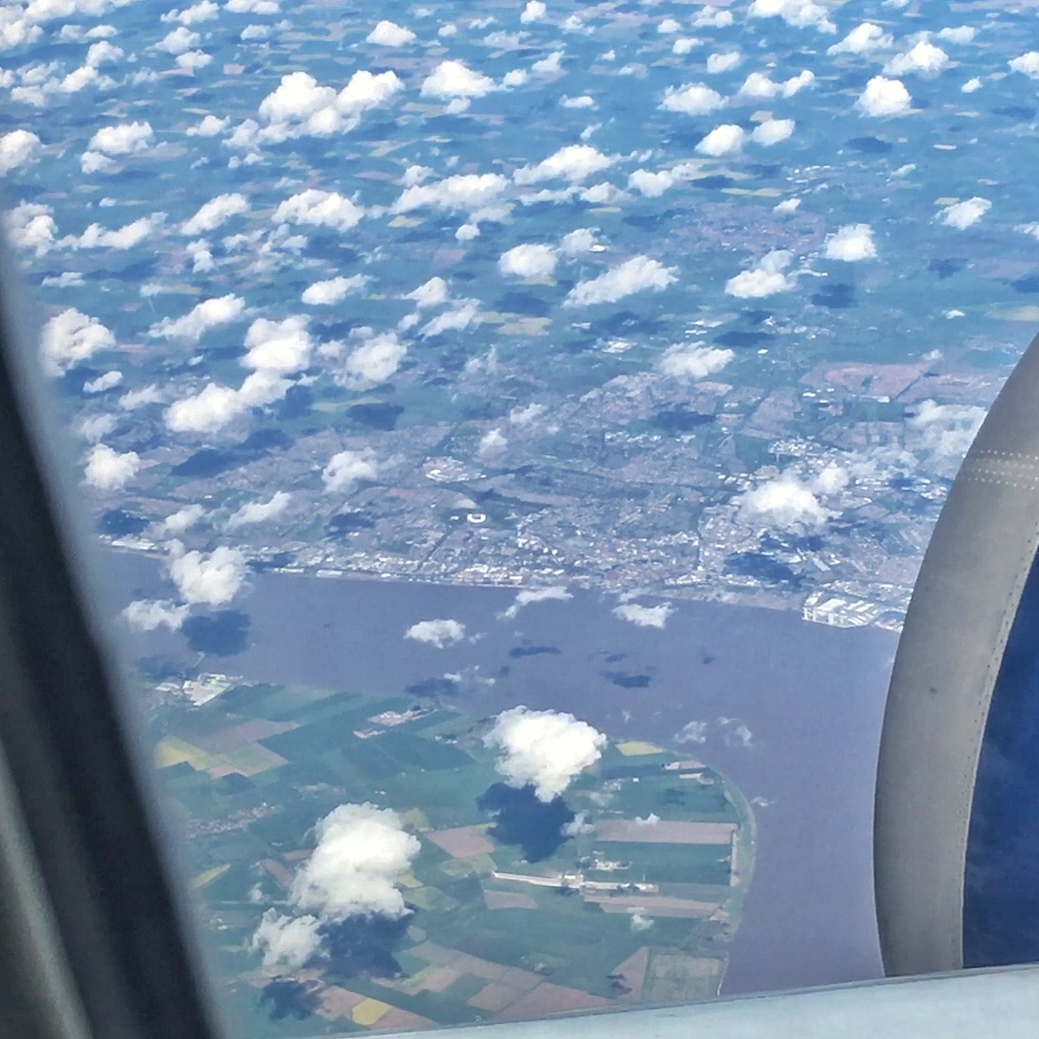 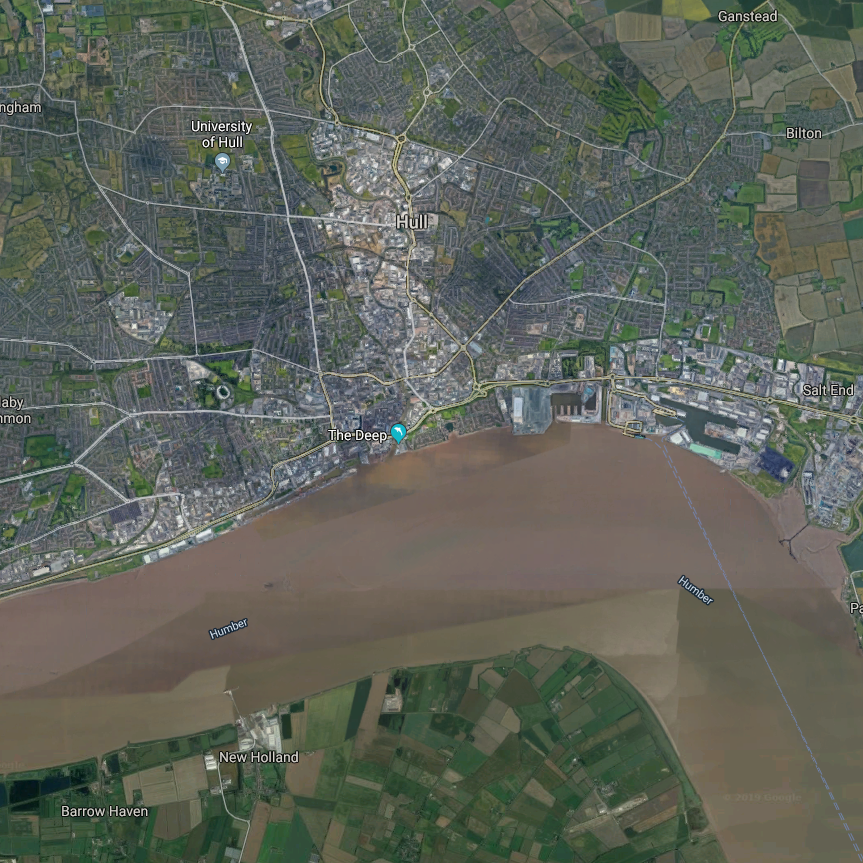 We finally made it to Atlanta, where we had a three-and-a-half hour layover. It was 2:55 local time, which was already 8:55 German time. Atlanta is a major hub for people coming into the U.S., so you’d think they’d have an efficient processing system worked out. They don’t. We were ushered from one line to another until I felt like I ought to start mooing. We had to clear customs, then pick up our bags on one conveyor and walk them about 100 yards to another conveyor where we surrendered them. A large, brutal-looking woman stood there and screamed at us like she was a prison guard. She screeched the same thing over and over like it was the most important information we’d ever hear. It was this. “Open your passport to the page with your photo. It is not this man’s job to open your passport for you.” We thought this was pretty ridiculous. Not only was it rude and annoying in the extreme, but if they actually made it the guy’s job to open the passport for the occasional person who wasn’t prepared, they wouldn’t have to pay the obnoxious woman to scream about it. I couldn’t help wondering if that was her only job all day every day. If so, she was perfect for it.

We then had to walk a very, very long way to our new gate. We carried our heavy carry-on bags the length of two entire terminals, then through a tunnel under a wide stretch of tarmac and then almost the length of another terminal to our gate. We still had a couple hours to wait. I got a little bit of a second wind and wandered some. We finally boarded in Delta’s usual inefficient way. Sally had the window seat. I was in the middle. Next to me was a young man who was very pleased with himself. He was going to Denver to see a concert that very night. He started the flight by ordering three tiny bottles of gin and kept telling his buddy in the seat behind him about it. For whatever reason, the airlines kept finding more luggage that was supposed to be on our plane. We sat at the gate for an additional 45 minutes before taking off. My second wind was gone and I was simply miserable. Sometime on the flight, I began coughing. My cold, or whatever it was, was turning into bronchitis (which I’m still very much dealing with as I write this eight days later).

I didn’t do anything to win the guy next to me over. I’d bought two bottles of water in the Atlanta airport, not realizing they were sparking water. When I opened one on the plane, the contents exploded all over me and Sally. The guy jumped up, and I apologized profusely, but somehow none had gotten on him. We, however, were drenched. The sparkling water was awful and I couldn’t bring myself to drink it, so during the three-and-a-half hour flight all I had was a tiny cup of apply cranberry juice.

This plane was a newer one, with a larger menu of movies and TV shows. I watched the final 20 minutes of Ferris Bueller’s Day Off which I’d started on the flight to Europe eight days earlier. I then watched Reds. Or sorta watched it. I was near delirious by this point. Sally was just as tired, and her stomach was cramping (as was mine), but I also had the sore throat, the cough, and fatigue from two prior nights of little sleep. I didn’t realize at the time that I was also very dehydrated—I wasn’t thinking clearly.

When we were about half an hour out of Denver, the fatigue, the pain from the bronchitis, the dehydration and the stomach cramps caused me to faint. I don’t know how long I was out, but when I came out of it, I was slumped over toward Sally (she thought I was asleep) and my body was as drenched with cold sweat as if I had been swimming fully clothed.

We finally got off the plane and found our way to the baggage claim for our luggage. I knew we were in no condition to drive the hour to Colorado Springs. We made our way to the Westin Hotel at the airport, but the woman, who looked at us with pity and a touch of disdain informed us that rooms were $475/night. Even in our condition, that was ridiculous. I was increasingly nonfunctional. Sally guided me over to a table in the lobby. She called a Fairfield Inn nearby while I called a Hampton Inn. She got through first and made a reservation for $140. We grabbed a taxi and rode the five miles or so to the hotel. It cost us $32. The driver wasn’t fluid in English, but he was friendly.

Very few places in my entire life have looked as good to me as that hotel room. I took a quick shower and then headed to bed. It was already 6:30 am in Stuttgart, 25 hours after we’d gotten up. I slept a bit, but my head was caving in. I kept drinking water, but that just meant I had to get up more often. Then I realized that my body was on German time for caffeine. Sally had bought a Coke in the Atlanta airport, drank about half of it, and then for some reason carried it with her through all our adventures. I got up at about 5:00 am and drank the rest. It helped me get a few hours of sleep.

When I woke up, I grabbed a quick breakfast in the lobby, then caught the free shuttle to the airport. (We could have taken it to the hotel the night before instead of the taxi, but the thought of waiting for a shuttle bus at that point and trying to figure out if it was the right one, was unthinkable.) At the terminal, I climbed off that bus and immediately onto another one that took me back to the lot where we’d parked our car. It cost us $81 to park it there for eight days. Sally had eaten breakfast while I was gone. I picked up her and our luggage and drove home, arriving around 9:30 am.

The trip home was horrible, but the trip itself was fun. It’s my goal to forget the first over time and just remember the latter.

2 Responses to The Longest Day of My Life