First of all, why “Ulmer”? I googled “famous people named Ulmer” and came up with nothing. Then I just googled it as a first name and again drew a blank. It’s only a last name, as far as I could tell. It means “someone from Ulm.” But I guess once you’ve used Ulysses and Ursula, names that begin with “U” are rather scarce.

Anyway, the dire prognostications regarding this storm came early and often. At about 2 p.m. on Tuesday, when it was near 60° and the sky was cloud-free, my office announced that it would be closed on Wednesday. Afternoon reports began throwing around words like “bomb cyclone, “bombogenesis,” and “millibars.” If the air pressure dropped as far and fast as predicted, the storm would set all-time records. (It did, in fact, set records.)

Wednesday morning dawned damp and dreary. Temperatures were around 50° and the wind was mild. I called the local auto shop and asked if they were open. They said of course they were. I told them I was bringing my car in for an oil change. The place is about 200 yards from my house. The woman at the desk told me she didn’t think the storm would amount to much and that they’d be open all day. I walked home and went to work writing my next lesson on the Gospel of John.

Weather predictions were still dire, so I decided to log the day. Every so often, at irregular intervals, I held my camera up to the window and took a couple seconds of video. Here’s a compilation of the day’s excitement. The woman in the red coat is my neighbor from Georgia who went outside for about 30 seconds, I think just to experience a blizzard.

Sally’s work was a little slower to react. When she went to bed last night, her office had only decided on a late start to the day. But about the time her alarm went off this morning, they’d closed for the day.

Earlier in the week, I’d called our plumber to schedule an appointment. Our house was constructed with builders-grade materials, and we’re slowly upgrading. It was time to replace our tiny round toilets with larger, more-powerful ones. I’d given the plumber the option of choosing this week or next. He chose today. It was already snowing hard by the time he got to our house. He told me he couldn’t get the kind of seats we wanted at his supply house. He went to work in the two upstairs bathrooms.

Around 10:00 the auto shop called and said our car was ready. The woman who had earlier told me they would be open all day said they’d decided to close at noon. I walked back over. By this time, the wind had picked up and sand-like snow was whipping horizontally. By the time I got to the shop, no more than 10 minutes after the call, they had decided to close immediately. I was the last customer out.

I drove from the shop to Home Depot, about five miles away, to pick up toilet seats. We wanted seats on our new toilets, of course, but I also wanted to be able to say that during the worst blizzard in Colorado history, I went out to buy toilet seats.

The roads were slick and got slicker during the half hour I was out. There wasn’t much traffic, and I don’t drive like the morons who either freak out or disregard the road conditions, so I was fine. The short walk from my parking spot to the Home Depot door was intense. The winds by this time were gusting at 70 mph or so. Stretches of the road on the way home had near white-out conditions. I took a few shots through my windshield that you can see in the video below.

When I got home, the plumber was waiting for me. He had to go home to get a saws-all to cut through the bolts on the last toilet. But his van battery was dead. I pulled up so he could jump his battery, then parked in the garage for the rest of the day. Sally saw a text from the city of Colorado Springs that said they were parking their plows because it was so bad out. I thought the idea of parking snow plows because it was snowing so hard was rather funny. I texted the plumber and told him we were fine with him not coming back until another day. He took me up on the offer. It took him more than two hours to drive the 15 miles to his home.

The rest of the day was uneventful. I wrote and watched the determined House Finches cling to my feeder no matter how hard the wind blew. After about 2:00 in the afternoon, I didn’t see another car go down my street. I got an email from my work saying that the office would be closed again Thursday. Sally’s office also closed.

I-25, from Colorado Springs north to Castle Rock was shut down. Thousands of cars and trucks were stuck. Other streets in the city were blocked too, and many people spent the night in their cars. I-70 was closed all the way to the Kansas border, and I-76 was closed to the Nebraska border.

Around 10:00 p.m., the wind died down and the snow let up. I saw my neighbor across the street shoveling his drive. Our street is situated so that the wind leaves my driveway almost bare (I had about an inch of ice) and buries his in drifts. I figured half of his snow should be my snow. And he has a broken foot. So I headed out and helped him finish his drive. Because it was so warm the day before the blizzard, the snow was already melting from underneath and the bottom couple of inches were heavy slush. I was surprised as I walked across the street—my feet sank at least 18 inches in the snow on the road.

When I got back inside, my blood was pumping from shoveling, so I stayed up and watched the last few episodes of the TV series The Fugitive (1963-1967). I bought the complete series back in January and I’ve been watching an episode or two almost every night for the last two months. It was the first TV show that featured an ending that wrapped up the plot. 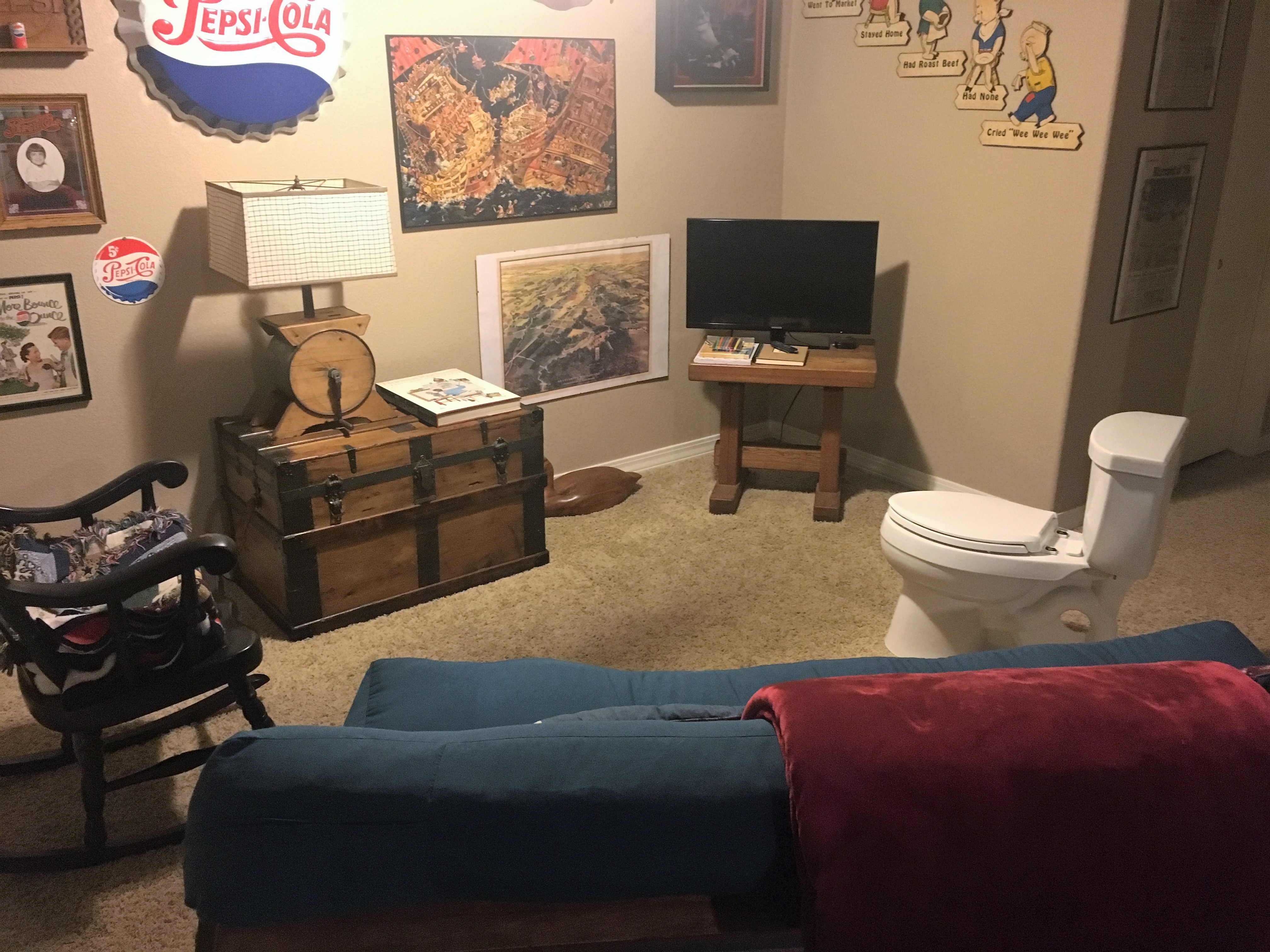 On Thursday morning, I woke up with the light. Outside, there were two ruts running along my side of the street where somebody had made it through. I saw a van, driven by a guy who lives catty-corner, get stuck as it tried to turn onto the next street. The guy’s wife was out with a shovel trying to get him going. I got dressed, grabbed my shovel, and went to help. The guy behind the wheel is an intern at a hospital and had to get to work. He’s from Rockford, Illinois. His wife, Hannah, is a schoolteacher from Des Moines. We got him unstuck and around the corner, but there was another car in the middle of the road blocking his way. The driver of that one had gotten so much snow wedged under his car that his rear wheels weren’t touching the ground. He was digging around, but I don’t think he had much of a plan. He mostly just moved the snow around and wasn’t really getting any closer to being free. I dug around his wheels. Hannah and I then shoveled a path up the street to where the wind had cleared things a bit. With some coaching from me on straightening his wheels and rocking the car, we got the guy out, and Hannah’s husband was able to follow.

Up the street, we saw several ladies trying to get yet another car unstuck. Hannah and I walked down to help. The car didn’t seem to be in deep. I told the lady who owned it that I thought we could get her out if she rocked the car. One of her neighbors explained that the woman had fallen down and hit her head the night before, spent the night vomiting, and didn’t feel well. The woman got out of her car and asked me to try to get it free. I backed it up a foot, then threw it into drive and pulled right out. I backed it up the street, then pulled it into her garage.

Hannah and I chatted while we walked back to our houses. She offered to help me with my drive, but I only had an inch of ice, so I thanked her but declined. I went in to eat breakfast.

The plumber texted and said he was on his way. I went out and scraped the ice off my drive. He got the last toilet installed, then got stuck in the street after backing out of my drive. I went out and helped dig and push him free.

By this time, I was beat. I texted my boss and told her I was taking a day off instead of working from home. The sun came out and the temperature climbed to near 30°. A great deal of snow melted, both from the sun and from the warm ground underneath. No plows came to clear our street, so it’s still just an icy, rutted mess, but it won’t be long until life is back to normal. Although my office is closed on Friday too. Sally’s isn’t.

This entry was posted in Nature and the Outdoors. Bookmark the permalink.