On January 1, 1977, Michael Carmichael and his three-year-old son painted a baseball light blue. 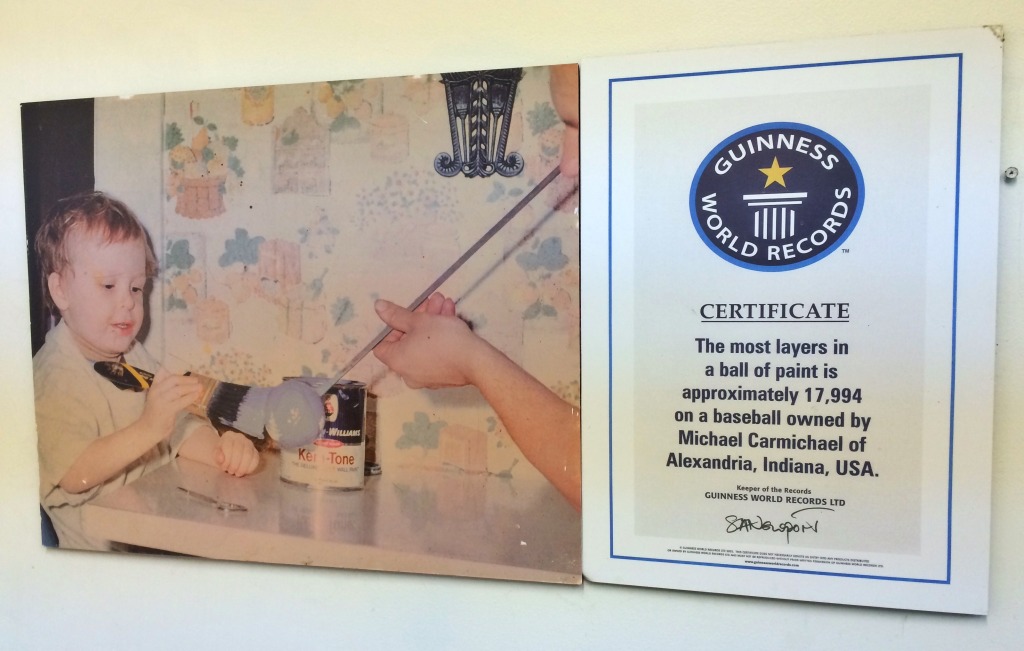 And then they painted it again. And again. And again. That baseball now has 24,505 coats of paint on it. It weighs over 4,000 pounds. And it’s in the Guinness Book of World Records. It’s so large that a special shed was built in the driveway next to the Carmichael’s home. The “baseball” hangs from an I-beam on a heavy frame.

Michael and his wife Glenda are happy to have people stop by and give the ball another coat. (On days when nobody shows up, Michael gives it a coat of white.) We couldn’t pass up a chance like that, so we made a reservation and stopped by. As it turns out, we were the only visitors on a very wet Saturday afternoon. 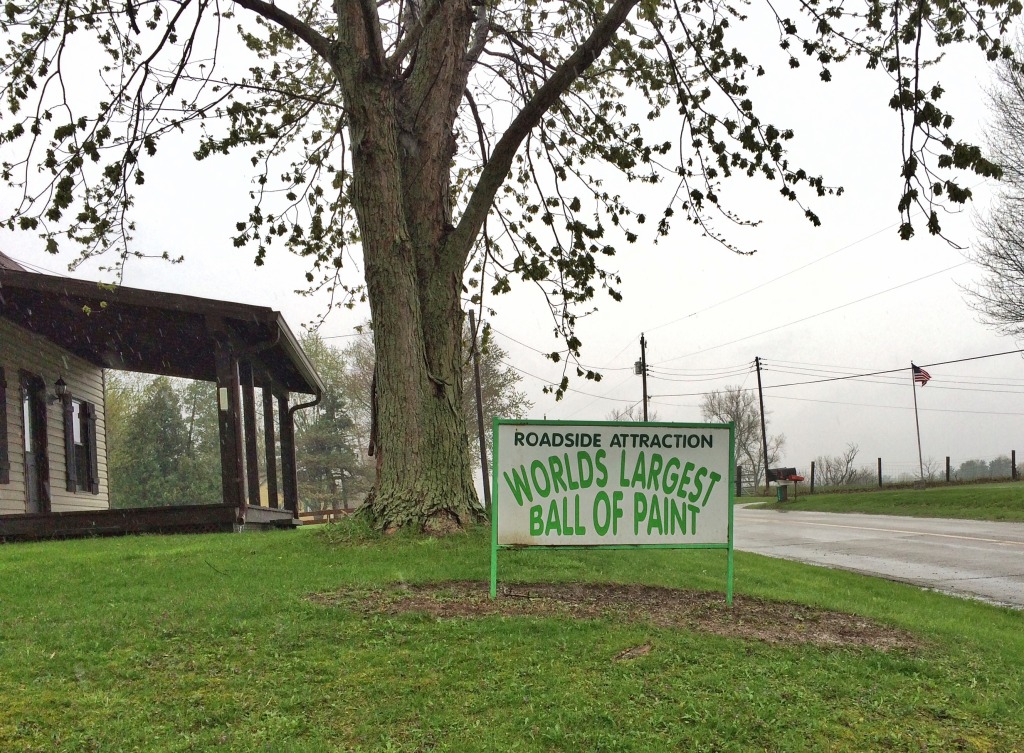 Michael and Glenda greeted us at the door of the shed. Michael gave us his standard greeting, but I didn’t comprehend much of it because I was staring at the dimpled blob in front of me. I had to ask him to repeat most of what he said. The ball had 24,504 coats on it already. The number 24,505 that Michael had written on the ball was our coat. He had us stand next to it and took our picture for his album.

A paint company donates the paint. There were several five-gallon buckets nearby. Michael allowed us to choose our color, and I picked red. The only rule is that it can’t be painted the same color twice in a row. He prepared four rollers and kept both of us going by giving us new rollers every few minutes.

In the background, you can see part of the frame with signatures on it. We added our names and also signed a register. Michael asked about the chair and, when I told him, sat down and asked his wife to get a picture of him sitting on the it. I barely had time to put down my roller and take a photo of my own. 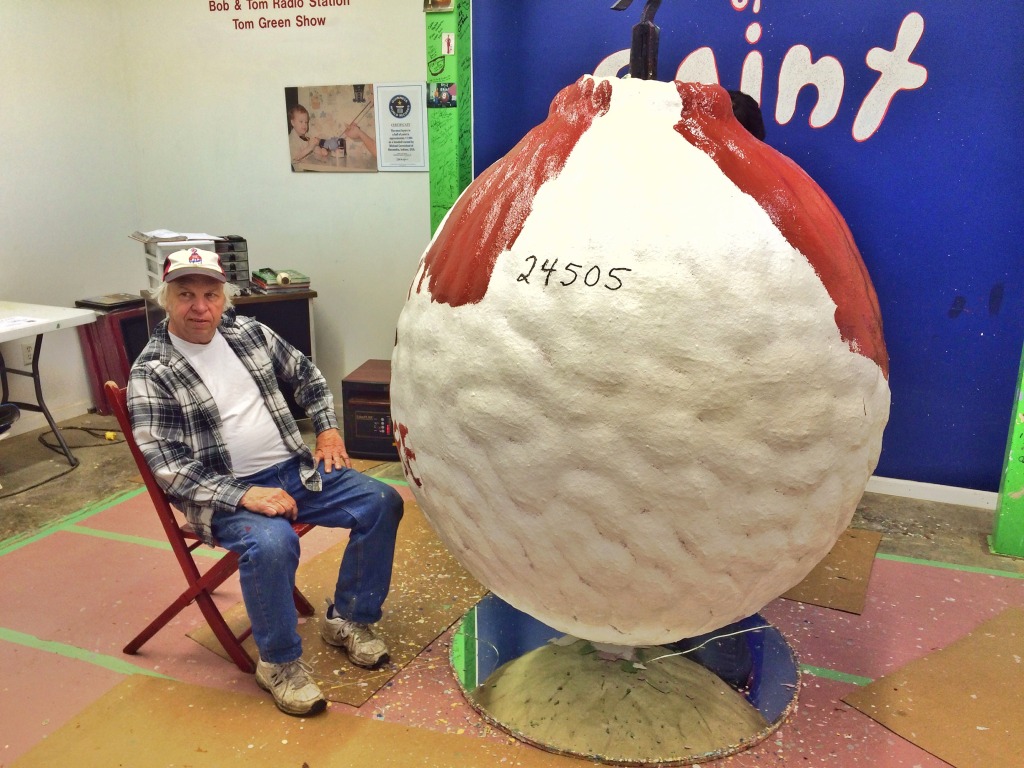 It would have been difficult painting the underside without the mirror on the floor.

Our coat took perhaps 15 minutes. It was a little tricky getting into all the dimples, but we persevered. When we finished, we looked at all the displays around the room, including lists of others who have painted the ball. The Oak Ridge Boys have been there. They sang as they painted the ball. Jimmy Kimmel painted a coat. The Gaithers, Tom Green, Sports Illustrated. One guy proposed to his wife by painting “Will you marry me?” on the ball.

There was a sign on the wall listing how many coats of each color are on the ball, although it’s about 3,000 coats behind. 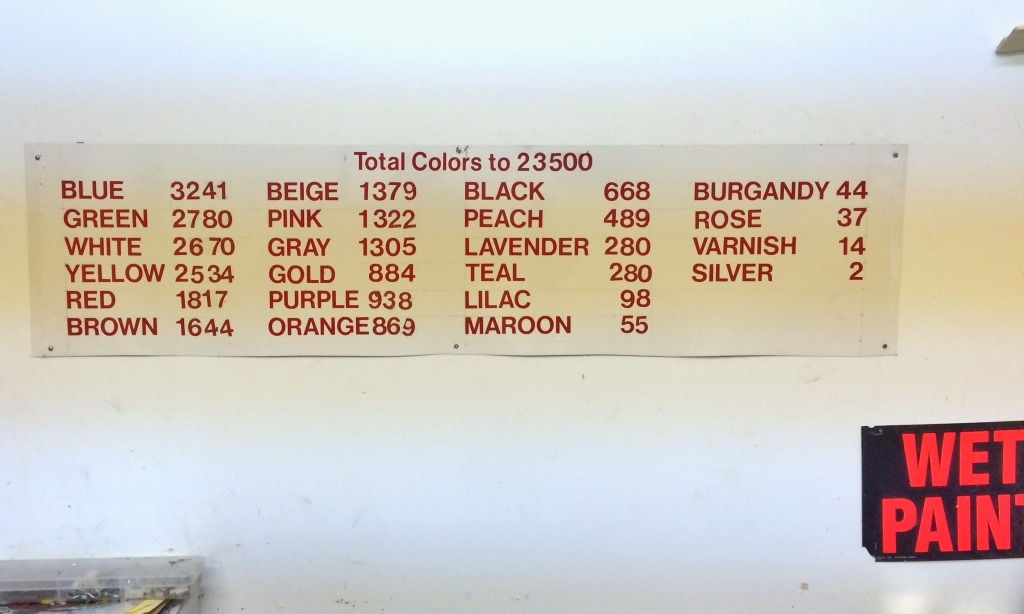 As we were pulling out of the driveway, I realized I hadn’t taken a photo of our completed coat. The Carmichaels had already gone back in their house, and the shed was locked and the lights off, but I ran back through the rain and took a photo through the window. 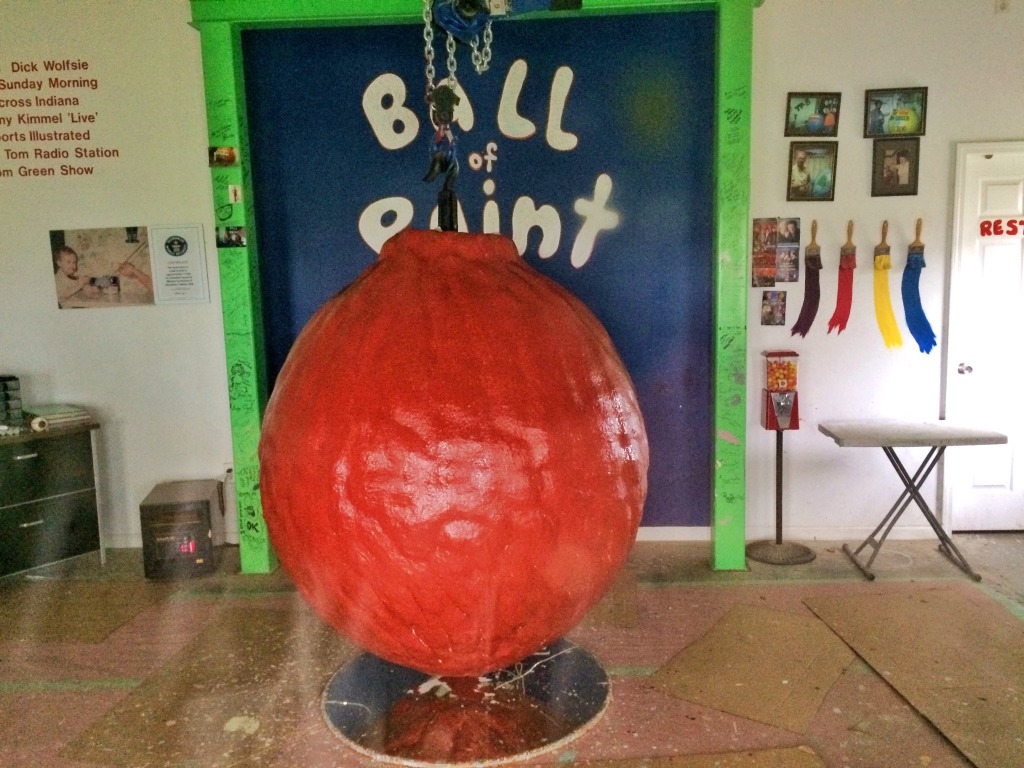 Somehow the experience managed to be very silly and very cool at the same time. The neat thing was that, for a brief time until the next coat was added, we held the record all by ourselves.

This entry was posted in Roadside Attractions. Bookmark the permalink.