Our route took us right through Fort Scott, Kansas, so of course we had to stop at the National Park.

The park is a monument to nothing much. The fort was built in 1842 as a post along the “permanent” Indian frontier. Within years, settlers were moving beyond the frontier and troops from the fort helped patrol the major trails. By 1853, the fort was abandoned. The buildings were sold at auction to private owners, and the town of Fort Scott grew up around them.

The Kansas-Nebraska Act was passed in 1854, giving residents of the two territories the right to choose for themselves whether or not to allow slavery. Two of the fort’s barracks were turned into hotels. One, the Western Hotel, was popular with pro-slavers. The other, the Fort Scott Hotel across the parade ground, was popular with free-staters. In 1858, an abolitionist named James Montgomery tried to burn down the Western Hotel but failed. A second raid resulted in the death of one John Little, the only “battle” casualty the fort ever saw.

When the Civil War started, the Union army reoccupied the fort as a supply base and militia headquarters. In 1864, a Confederate force passed through the area but didn’t enter the town. After the war, soldiers from the fort protected railroad laborers who were having trouble with squatters on railroad land. By 1873, the trouble had ended and the troops left for good.

Most of the fort buildings were torn down or burnt. Only a handful remained when the fort became part of the National Park Service. The survivors were restored to their 1840’s appearance, and some of the others were rebuilt. Here’s what it looked like before it was restored. The buildings I’ve marked with red arrows are part of the original fort and are the only ones in this photograph that remain (except for a few brick outbuildings). 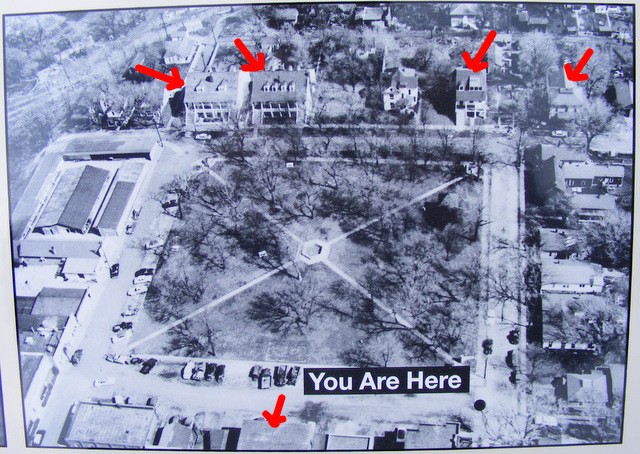 The large building in the center of the panorama at the top of this post was the post Hospital (the lower red arrow points to it in the aerial shot). It’s now the visitor center. A room upstairs is set up to look like a hospital ward. All of the buildings were furnished with period pieces, but of course none of it is original to the fort. 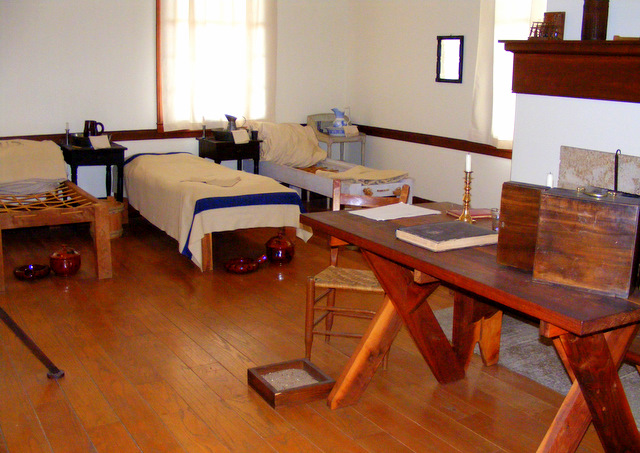 Here’s another look at the Hospital, with the reconstructed Guardhouse (and jail) on the left. 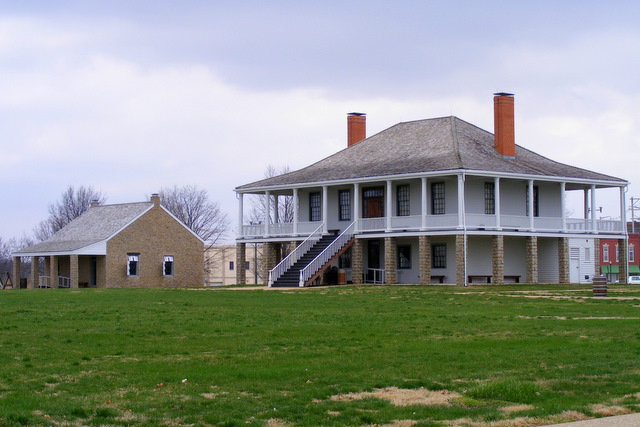 And just for good measure, another one with the reconstructed Infantry Barracks that later became the Western Hotel on the right. 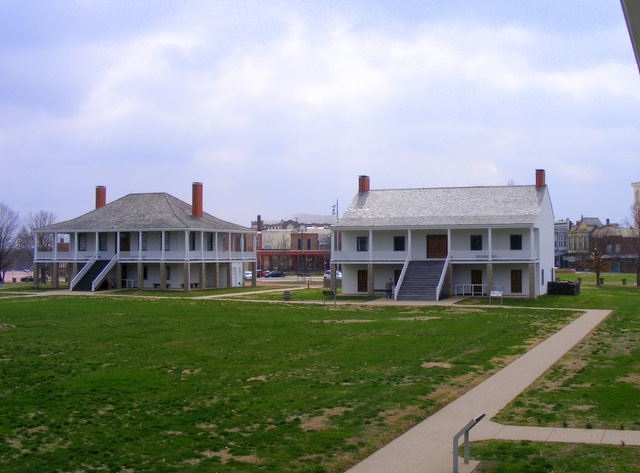 This building contained a museum and a film that restated the exact same information that we’d already read in our brochure and on the signs posted outside.

I took a pan of the fort from the upstairs porch of the hospital. The long white building on the left is the Dragoon Stables. The others (l. to r.) are the Dragoon Barracks, Post Headquarters, three Officers’ Quarters, the Quartermaster Storehouse and a second Infantry Barracks. The brick building in the center is the Powder Magazine. There were other buildings here when the fort was active that haven’t been rebuilt.

This photo shows officers’ row in the 1870’s, when all these buildings were private homes. Below it is my wildly-unsuccessful attempt to take a photo from the same angle. 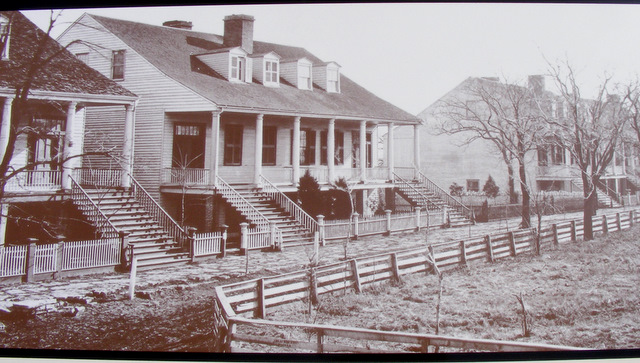 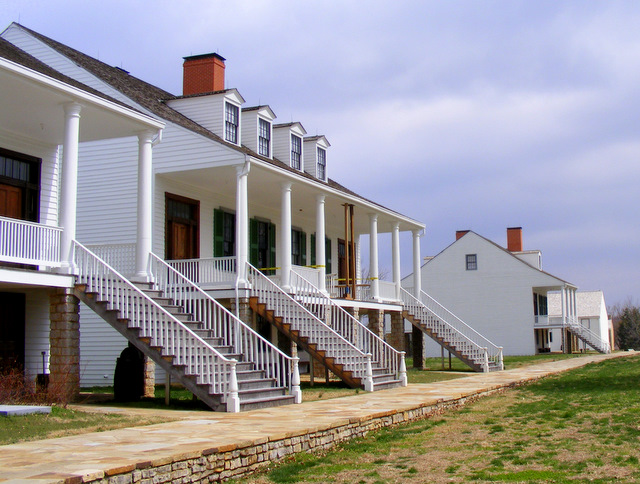 Here’s the back of the Officers’ Quarters with their brick stables and latrines, all of which are original, I believe.

I took this pan from the porch of the one of the Officers’ Quarters looking back across the parade ground from the other side. The Hospital is hidden behind the tree in the center of the photo. The little white structure center left is the well.

The Quartermaster Storehouse is also original (although all these buildings have been so altered over the years that very little remains from 1842). My daughter, in her gray sweatshirt, can be seen standing by the orange cone. 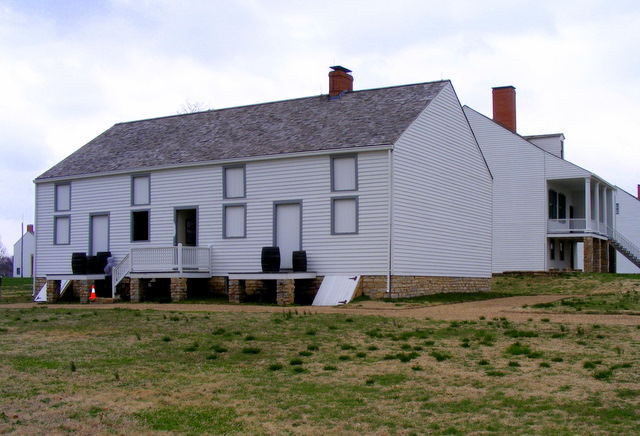 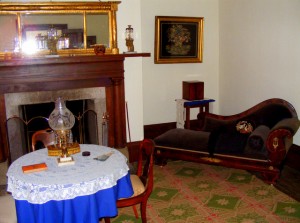 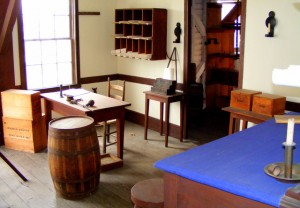 I scanned the map from the brochure to give you a better feel for the layout of the fort (on the off chance that you care). You can click on it to enlarge it.

It was a breezy, raw day until the sun came out just before we left. There were perhaps eight other visitors while we were there and, with one very brief exception, we had all the buildings to ourselves. Which is nice.