We stopped at a mall this morning, and I bought a point-and-shoot camera to tide me over until I got my good one fixed. We drove to Concord and stopped at the visitor center for Minute Man National Historical Park. The visitor center is located in a mansion built in 1911 by a descendant of one of the Minute Men who fought in the battle. 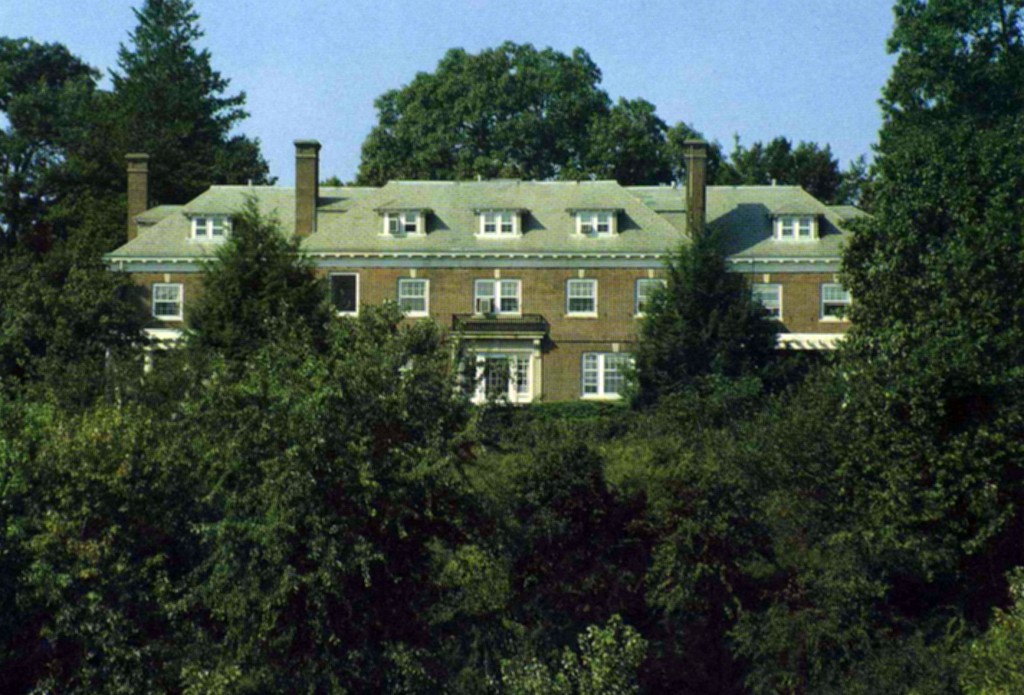 Across the road was the home of Major John Buttrick, the commander of the Minute Men at the North Bridge skirmish. The only two fatalities among the colonists at the bridge, Isaac Davis and Abner Hosmer, were laid out in the kitchen. 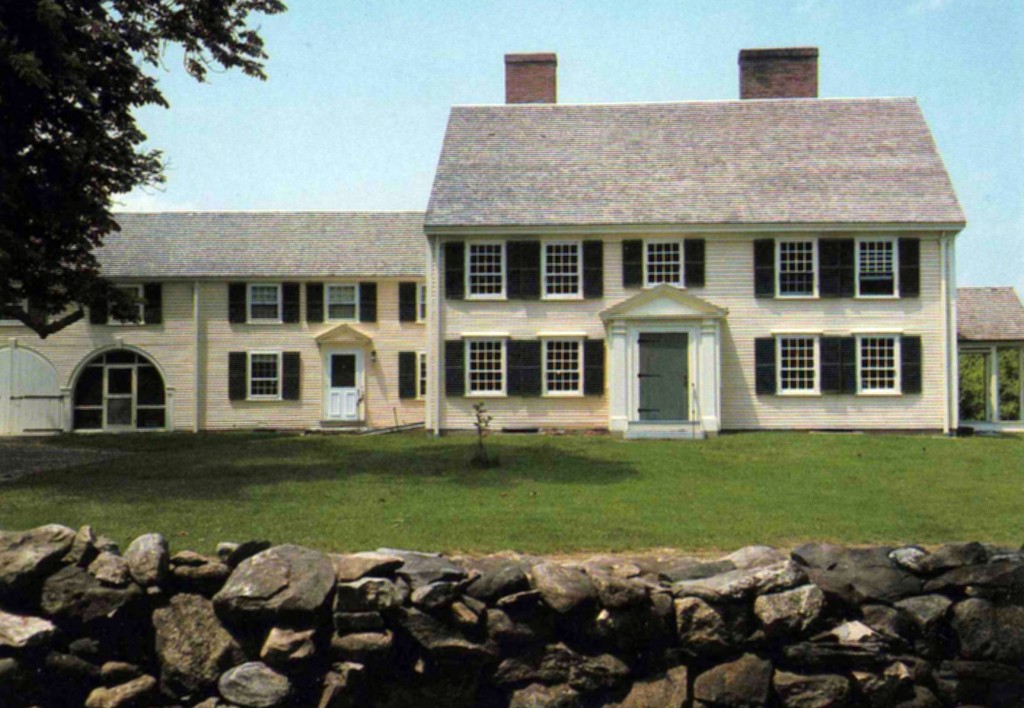 We drove the short distance to the North Bridge parking area and walked in the rain to the bridge. This isn’t actually “the” bridge. In fact, this is the fourth or fifth bridge built on this site since the war. We were the only people stupid or adventurous enough to go out in the rain to see it. I thought it was a pretty spot, in spite of the rain, but we didn’t stay long. 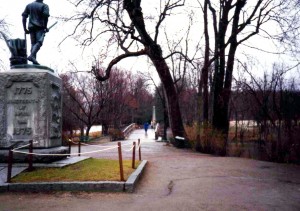 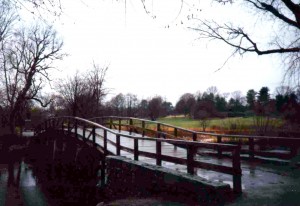 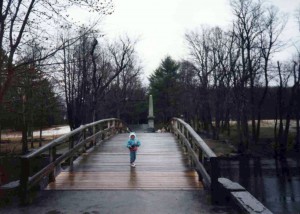 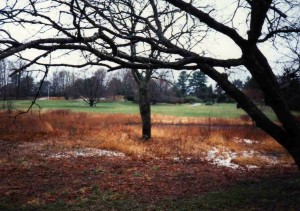 The photo on the upper right and the bottom right were taken from the same spot, looking in opposite directions. The first is looking east across the bridge toward the British approach route. The second is looking up the hill toward the west. It was on this hill that the American forces watched the British approach the bridge. The Minute Man statue, sculpted by Daniel Chester French, was erected on the Centennial of the battle. It stands on the west end of the bridge where the American forces fought.

We drove through Concord, which has done a good job of maintaining an 18th-century atmosphere. I parked near Orchard House, the home of Louisa May Alcott. My family wanted to take a tour. I walked next door and looked briefly at The Wayside, once the home of Nathaniel Hawthorne. I took a short walk on a path through the woods and came upon the foundation of a house that was once owned by a freed slave who fought for the Americans in the war. The others decided not to take the tour — just as they arrived, a bus-load of Japanese tourists, most of whom didn’t speak English, entered the house. 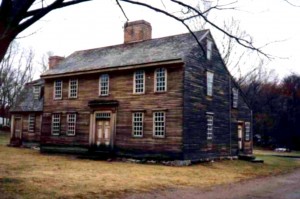 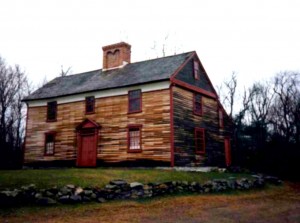 We drove along the Battle Road, stopping wherever there was something to see. The Hartwell Tavern (above, left) was built in 1754 by Ephraim Hartwell. On the day of the battle, the British passed here twice, the second time under heavy fire. It had stopped raining (but it was still cold and damp). We couldn’t go inside because it was only open during summer months, but we wandered around the yard for a short time. This house (above, right) was owned by Captain William Smith, the commander of the Lincoln Minute Men. By this time, I was the only one getting out of the car. 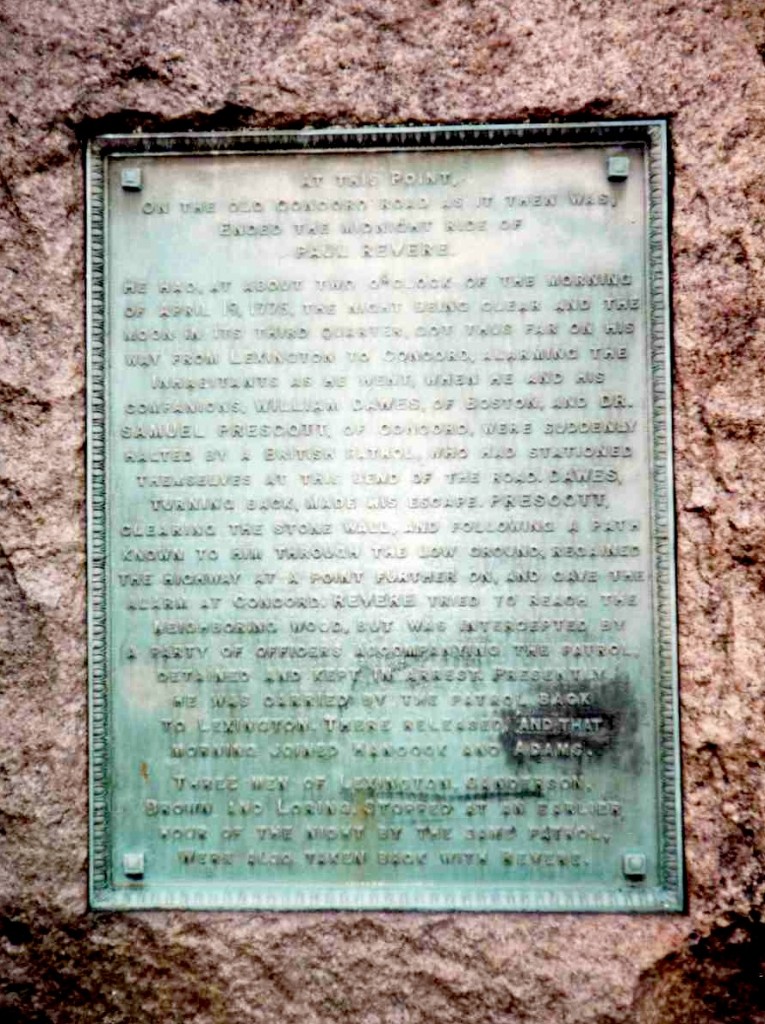 The plaque on this monument reads At this point, on the old Concord road as it then was, ended the midnight ride of Paul Revere. He had, at about two o’clock of the morning of April 19, 1775, the night being clear and the moon in its third quarter, got thus far on his way from Lexington to Concord, alarming the inhabitants as he went when he and his companions, William Dawes of Boston, and Dr. Samuel Prescott, of Concord, were suddenly halted by a British patrol, who had stationed themselves at this bend of the road. Dawes, turning back, made his escape. Prescott, clearing the stone wall, and following a path known to him through the low ground, regained the roadway at a point further on, and gave the alarm at Concord. Revere tried to reach the neighboring woods, but was intercepted by a party of officers accompanying the patrol. Presently he was carried by the patrol back to Lexington. There released, and that morning joined Hancock and Adams. Three men of Lexington, Sanderson, Brown and  Loring, stopped at an earlier hour of the night by the same patrol, was also taken back with Revere.

Fascinating, but it could be better written. 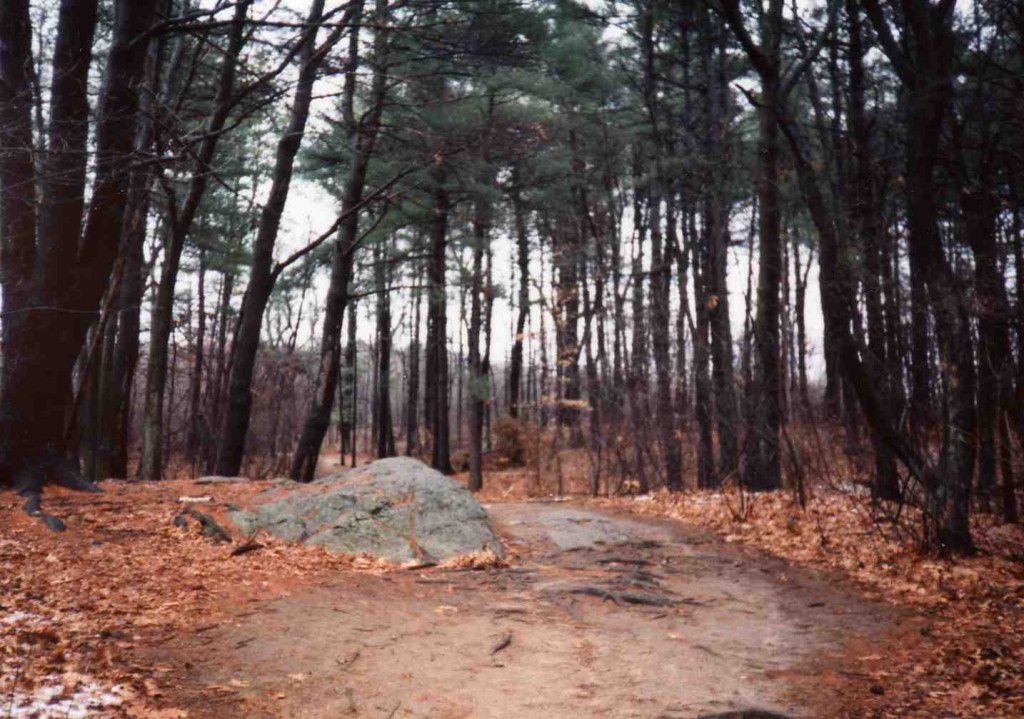 The final tour stop in the park was Fiske Hill where there was intense, close-quarters fighting during the battle. A trail left the parking area and looped around the hill. I would have loved to have walked it, but my family was waiting anxiously in the car. I walked up the trail about 40 yards and took this photo.