The Cubs Are in the World Series

I’ve always known that it would happen sometime in my lifetime. It’s one of the reasons I never stopped rooting for them. How depressing would it be to have it happen the year after I gave up?

The Cubs played the San Francisco Giants in the National League Divisional Series. I don’t have cable or dish or MLB network, so I was reduced to following them on the radio while watching the stats online. Usually I could see replays of great plays about half an hour after they happened.

I stayed up until nearly 2:00 to hear the Cubs lose game three in 13 innings. Cub fans were stressing. I posted this on Facebook.

Joe Maddon tells his players, “Never let the pressure exceed the pleasure.” I think that’s pretty good advice for fans too. Baseball is, after all, “entertainment.”

Game four wasn’t going well. The Giants were winning 5-2 in the top of the 9th and about to tie the series at 2-2. I actually went to bed — it was 11:00, and I was tired. But I couldn’t bring myself to stop checking my phone. Bryant and Rizzo reached base to start the 9th and then Zobrist doubled. I got up and listened to the rest of the comeback and victory in my study. The Cubs won 6-5 to move on to the NLCS against the Los Angeles Dodgers.

I wasn’t able to listen closely to a couple of the games in this series because we were getting things ready for our garage sale, but I checked in as often as I could. After falling asleep and losing games 2 and 3, the Cubs came on strong and won the series in six games. The Cubs were in the World Series for the first time in my lifetime — for the first time since 1945. They were playing the Cleveland Indians.

The World Series was on Fox, so I was able to watch it! After the first game, I posted this on Facebook.

Two observations: 1) I look forward to the day I can listen to a Cubs’ World Series broadcast in which every sentence doesn’t end with, “for the first time since 1945.” 2) I like statistics and odd records as much as the next guy. Maybe more. But COME ON Fox. “He is the first Puerto Rican shortstop with a wife and two daughters and a Z in his last name to ever get two hits off a 6’5″ lefty with halitosis” isn’t a record. It’s just a coincidence.

We watched part of game 3 at my mom’s place where we, and my sister, were celebrating her 95th birthday. I saw the end of the game at home. I just want to say this — the guy who scored Cleveland’s run was picked off third base. The call was safe and the replay review confirmed it. But he was really out. He had long dreadlocks, and you can clearly see that Kris Bryant’s glove tagged the runner’s hair before his hand touched the bag. If I guy wants to wear his hair like that, I’m OK with it. But it’s part of his body. He was out. He scored moments later for the only run of the game.

We watched the depressing game 4 at a friend’s house. As the game got out of hand, I posted this:

Please exit the Cubs bandwagon to the left. (To the LEFT, M’am!) Proceed in an orderly fashion. (No pushing and shoving Sir!) There’s plenty of time for everyone to get off. Thank you for joining us, and we hope to see you again next October.

If the Cubs lost game 5, the series would be over. I decided I needed a Red Chair photo to commemorate the fact that the Cubs were in the World Series, a significant moment even if they lost. Again, due to circumstances, this was all I could come up with. 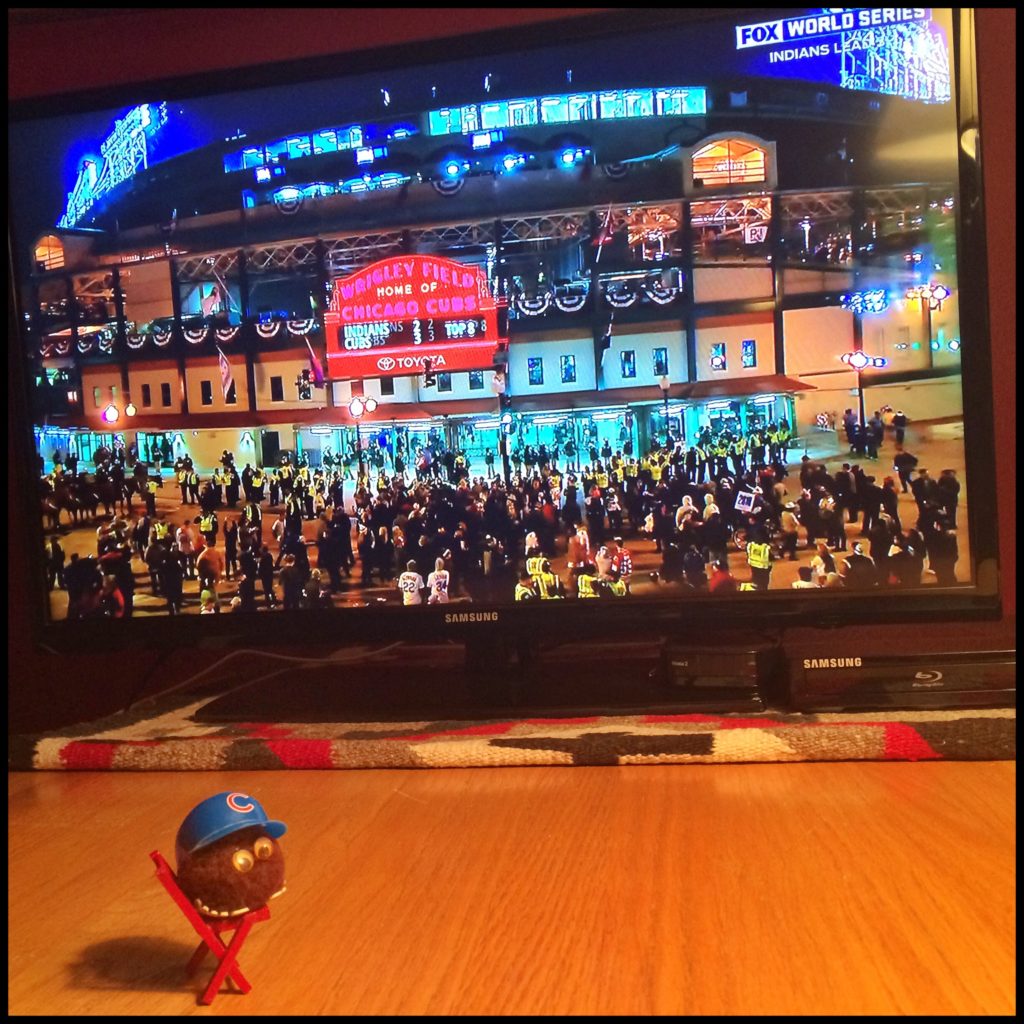 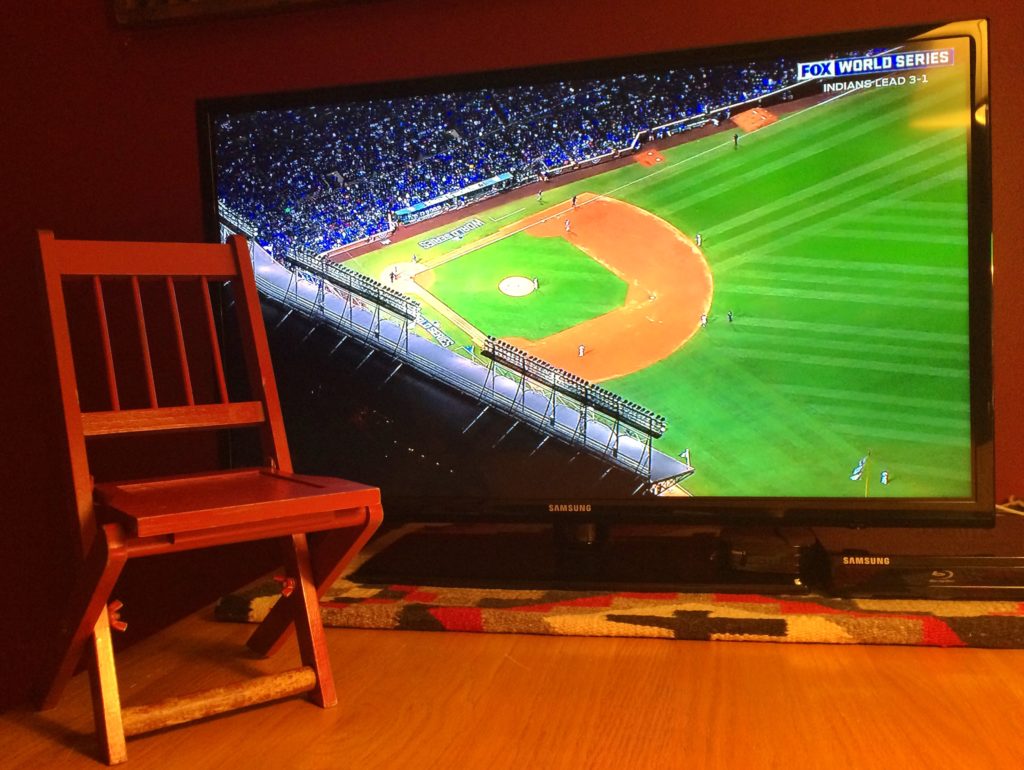 As I write this, the Cubs are down 3 games to 2 and headed back to Cleveland. Do I want them to win the next two games and the Championship. Of course. But, win or lose, this has been an entertaining year to be a Cubs fan. And after all, it is just entertainment. 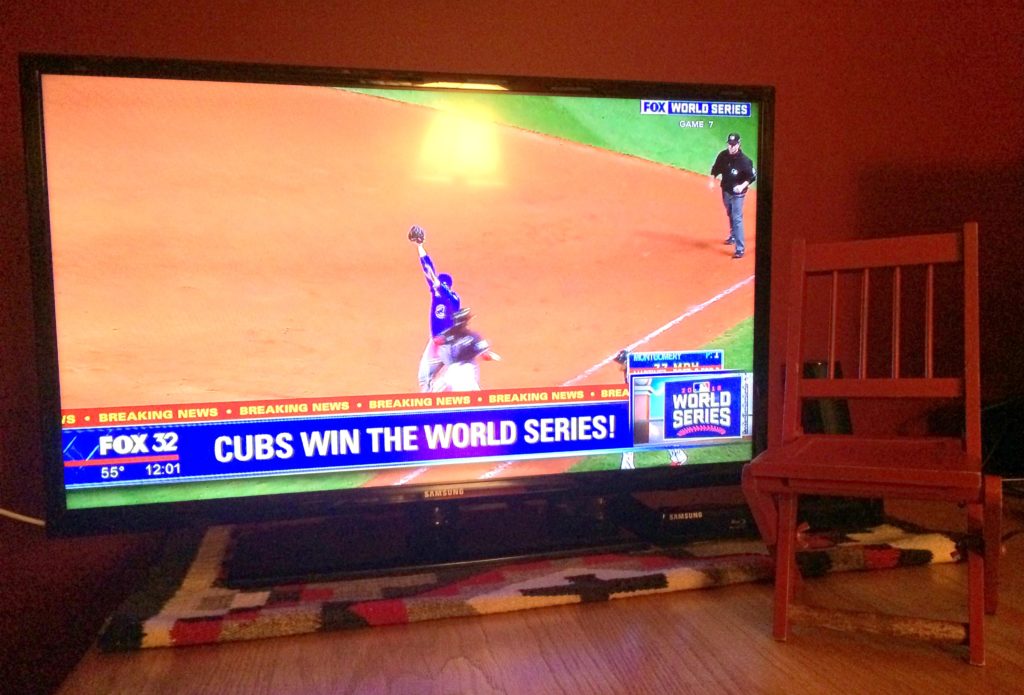 It was a long, stressful game, complete with errors and heroics and awful ball and strike calls by the umpire. The Indians tied the game in the 8th. At the end of the 9th, there was a brief rain delay. The Cubs came out afterwards and scored two in the top of the 10th and gave one up in the bottom of the inning until the Cubs finally closed it out 8-7. I watched alone at home. I can deal with the stress of an exciting game or I can be sociable. I can’t do both. 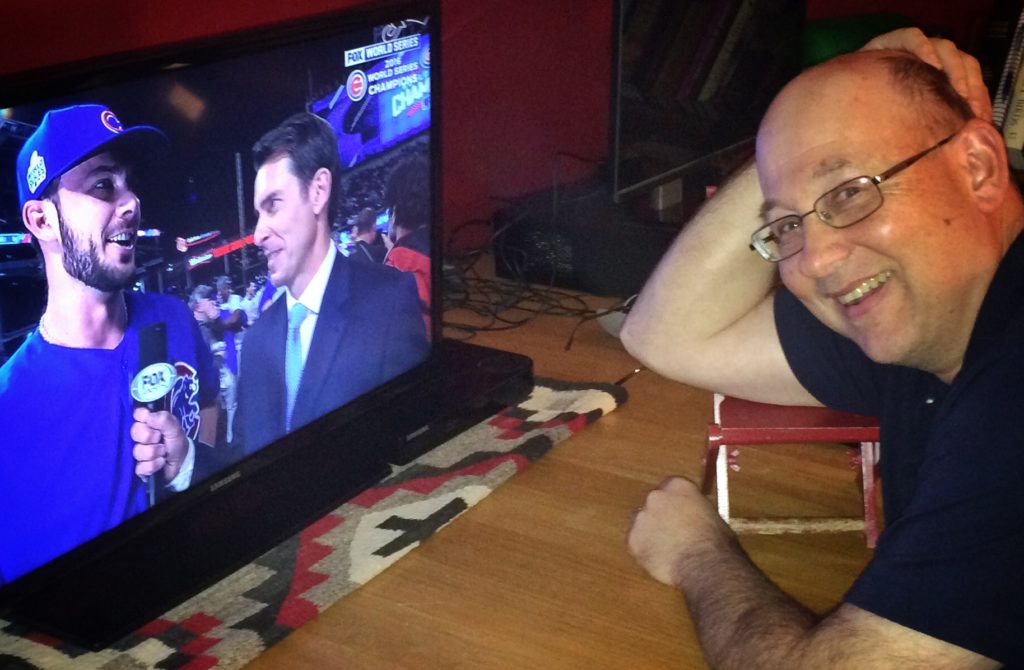 The game ended around 11:30. I got to bed about two hours later. Just fun.