The show only aired for one season — 1970. And I can understand why. The premise is kinda funny. Dress chimpanzees in human clothes and have them behave like humans. But the novelty wears off in about 20 minutes and the plots can’t sustain interest. Not my interest anyway.

Lancelot Link is an agent for APE (Agency to Prevent Evil). His sidekick/girlfriend was Mata Hairi. They were determined to prevent the evil plots by CHUMP (Criminal Headquarters for Underworld Master Plan). These plots, in the two episodes I watched, included the Hong Kong sneeze attack, a plot to kidnap a visiting king, a robot programmed to kill Lancelot and a bank robbery. 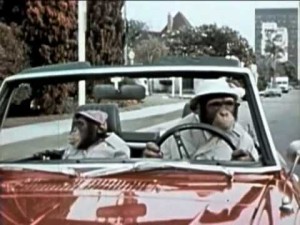 The apes were well trained. They played golf and tennis (sorta) and had a pillow fight. But the best parts were when the chimps did something wrong and it was written into the script. In one scene, Lancelot is wheeling the king down the aisle of an airplane in a wheelchair. He keeps bumping the chair into the seats. Instead of retaking the scene, or ignoring it, they had the king say “ouch” every time and Lancelot say “sorry.”

In between the two story lines in each episode, there was a song by the ape band Evolution Revolution during which the chimps would sorta play instruments. 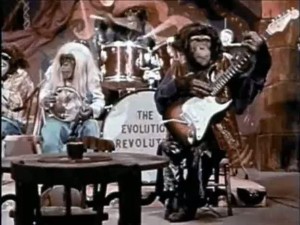 Cute, but two episodes were all I could take.

This entry was posted in TV. Bookmark the permalink.