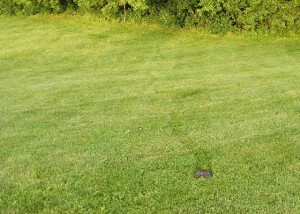 OK, this was weird. I wander around outside a lot, as you know, often in forest preserves and state parks and such. And when I wander, I keep my eyes open for wildlife of any sort. Long ago I studied up on Illinois turtles, so I know what to look for.

And then, within half an hour, I spot two species of turtles I’d never seen before while walking on a sidewalk along a busy highway. Go figure.

A lawn sloped down from the sidewalk to a pond (part of a fish farm) and a patch of woods. The Fox River was only a hundred or so yards away. A large (probably a foot long) turtle was … (what is it turtles do? stand? crouch? sit?) there. It’s neck was stretched out. I walked over, and it pulled back into its shell. It wasn’t quite as motionless as the Stinkpot, but almost. I tipped it over to get a look at the underside. 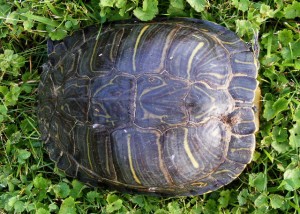 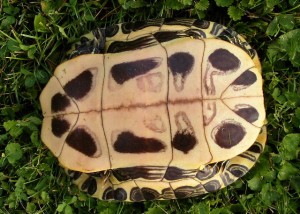 While Stinkpots have a noticably unmarked shell, this slider’s shell was intricately marked with yellow and green. There was a bright red patch on either side of its neck (visible in the left-hand photo below), where the ears would be if turtles had ears. That’s how I know it was a Red-eared Slider. 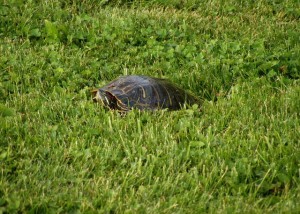 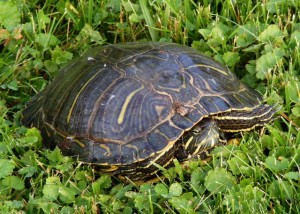 McHenry County is at the extreme northern edge of its range. In fact, the Internet sites I found don’t record them in McHenry County, although they have been found just south and just west of here. And as it happens, Red-eared Sliders are the most common pet store turtles. (Remember 40 years ago when a lot of kids had those tiny turtles in thost little green plastic ponds with little plastic palm trees? It’s illegal to sell them under four inches long now because they can carry salmonella.) They’re still raised in large numbers for foreign pet trade. So it’s possible this one was an escapee. But it’s also possible it wasn’t, so I decided to count it.