The Washburne House is open only on Fridays. The woman who gave us the tour is a volunteer. The state of Illinois owns the house and paid to have it refurbished, but refuses to allot money to run it or maintain it. It needs a lot of work on the outside — porches and balconies are obviously rotting and the woodwork needs painting. The only reason it’s open on Fridays is because local women are willing to volunteer. Neither of the women in the house when we visited knew much, but they were eager and friendly. 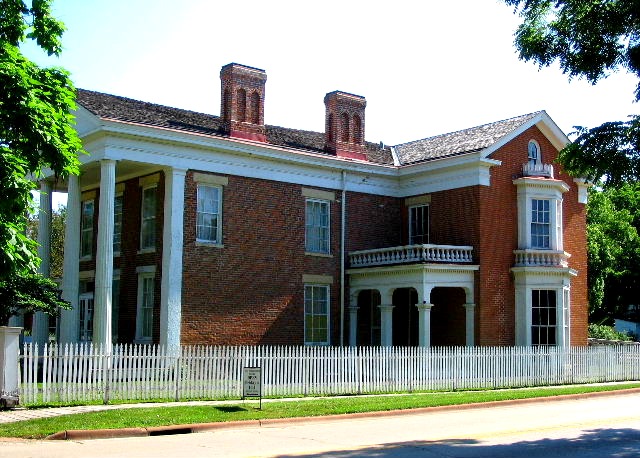 Elihu Washburne was a Galena lawyer who was a friend of Grant. Grant was in the library of this house when he found out by telegraph that he’d been elected President. The only original items in the house are a built-in bookcase and some shutters. A desk is one Washburne used in his law office. Everything else is “period.” Only two bedrooms on the second floor have been restored. The house itself is actually nicer than Grant’s, which is just up the hill.

I stitched together this panorama of the library where Grant heard he’d been elected. The photos don’t match up well, but you can get a good idea of what the room looks like. The painting in the foreground was made recently. It shows the room at the moment Grant got the news. He’s sitting at the desk on the right.