Afternoon in Germany — Day One

The next stop on our tour was Patch Barracks, another former German Army Panzer base now used by the U.S. Army. We bought groceries, including an Easter ham, at the commissary. (Photos and moments from this afternoon can bee seen on the video.)

We visited the Ritter Sport Chocolate Factory and Museum, in the town of Waldenbuch. There is a small museum in the Ritter visitor center, and a shop, of course, where we bought some chocolate. There was also a diorama with the Ritter factory and a road. Push a button, and a truck drives along the road and delivers a randomly-flavored chocolate bar into a slot. It was timed to only go once a minute, so we couldn’t load up. 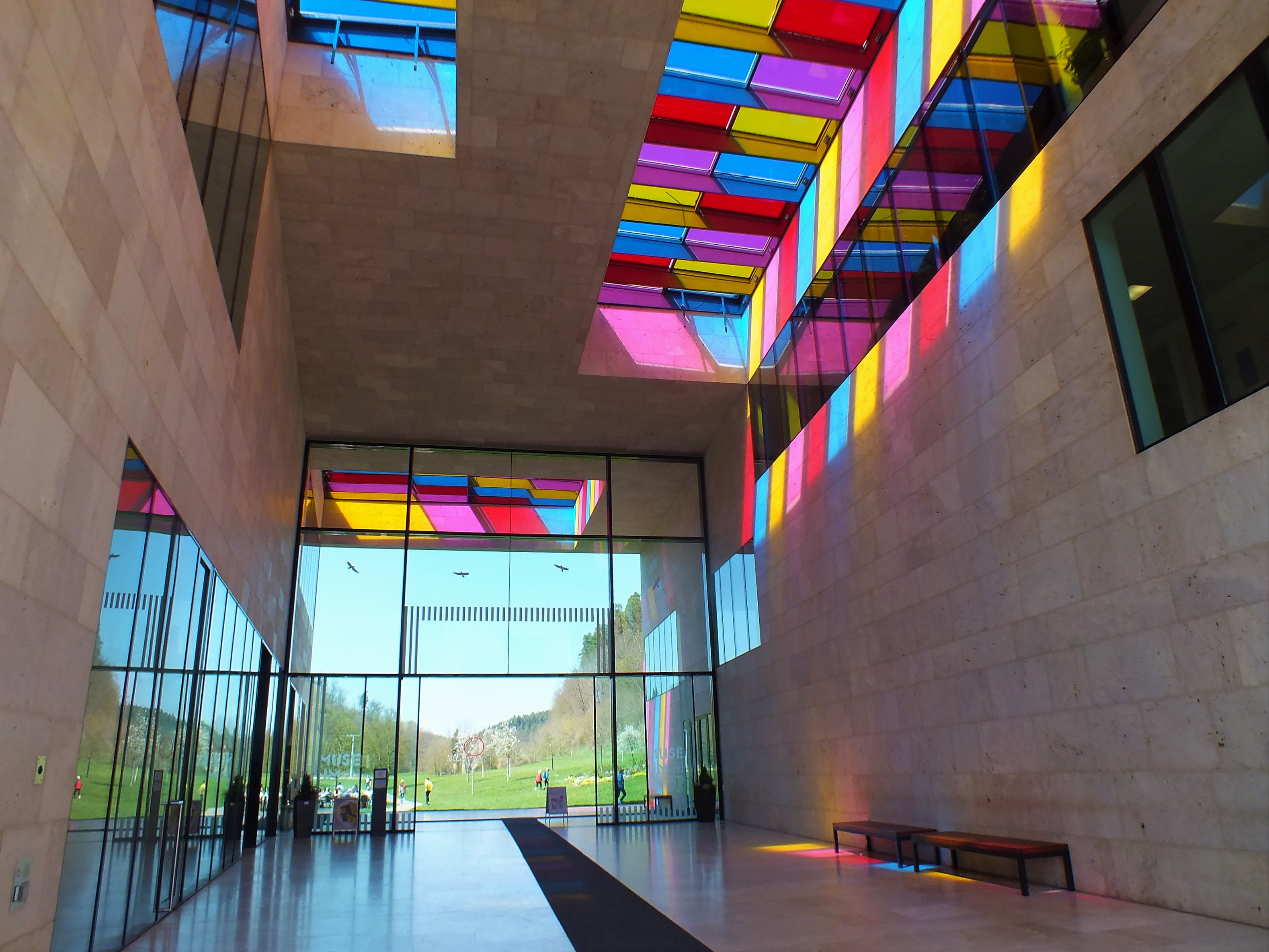 We ate at the cafe in the visitor center, inside the building but looking out on the patio and the countryside. I ordered a panini—I forget what kind—which wasn’t at all what I expected. It was pretty much just vegetables and maybe a little cheese on a roll. I also tried the Mezzo Mix, a combination of Coke and Orange Fanta that isn’t very good, although it’s popular in Germany. And here I will rant for the one and only time about the bizarre refusal to put ice in drinks in Europe. This didn’t surprise me. I’ve heard about it many times. But it’s weird. Soft drinks are made to be consumed cold. Ice cold.  When you order a soft drink in Europe it comes cool, but already not as cold as it should be. And you can’t savor it at all because, without ice, whatever you’re drinking quickly assumes room temperature and becomes awful. Most people drink beer in Germany, of course. Part of the reason is probably because all the other options are terrible. My craving for a Diet Pepsi over ice was strong.

While my family lingered over the meal, I grabbed my binoculars and headed out into the field and farmland next door. By the time we met up again, I had seven new birds, bringing my Europe total up to 15 (including Mallards and Barn Swallow, two of the seven species I saw in Europe that I’d already seen in the States).

We stopped at a Lidl grocery store on the way back to the base. This is one of the common grocery chains across Europe. Americans refer to it as “on the economy,” which means anything not bought on base. The produce here was amazing. Fruit in the U.S., at least in Chicagoland and Colorado, is shipped from who knows where and is bred for size and durability more than taste and freshness. At least that’s my impression. The strawberries, blueberries, and raspberries bought at this store were amazing, and they were still good when we finished them off three or four days later.

Back at the apartment, we were struggling to stay awake. My daughter was determined to keep us up until at least 9:00. When things got desperate, she took my wife on a walk to the commissary and shooed me off to on old cemetery about a mile down the road to bird.

This was a bit odd. I’d been in the country only a couple hours and already I was walking off by myself into a town full of people who spoke a language I didn’t understand. Except “exit.” I knew how to say “exit” in German. The cemetery was perhaps six acres, well kept, with a lot of trees. During the hour and a half I spent there, I probably saw 20 other people. A few of them looked like locals out for a stroll. Most of them seemed to be volunteers who helped keep the flowers watered. All of them were German, and before long, I had figured out how to deal socially with Germans.

Basically, you ignore them. Whenever I came close to one, he or she would stare at me intently with no emotion showing. When the staring got to the point that I figured they must desire some sort of interaction, I’d make eye contact. Immediately, they’d look away still without any facial expression. And certainly without any greeting. I never did figure out if they thought my birding was offensive, weird, interesting, or boring. No clue. I did my best to behave respectfully and added eight new birds to my list.

A note on German architecture, at least in southwestern Germany. It’s rather uniform. Almost all the houses were simple rectangles painted some shade of tan with dark brick-red tiles on the roof. Every residential area in every town looked exactly like this. 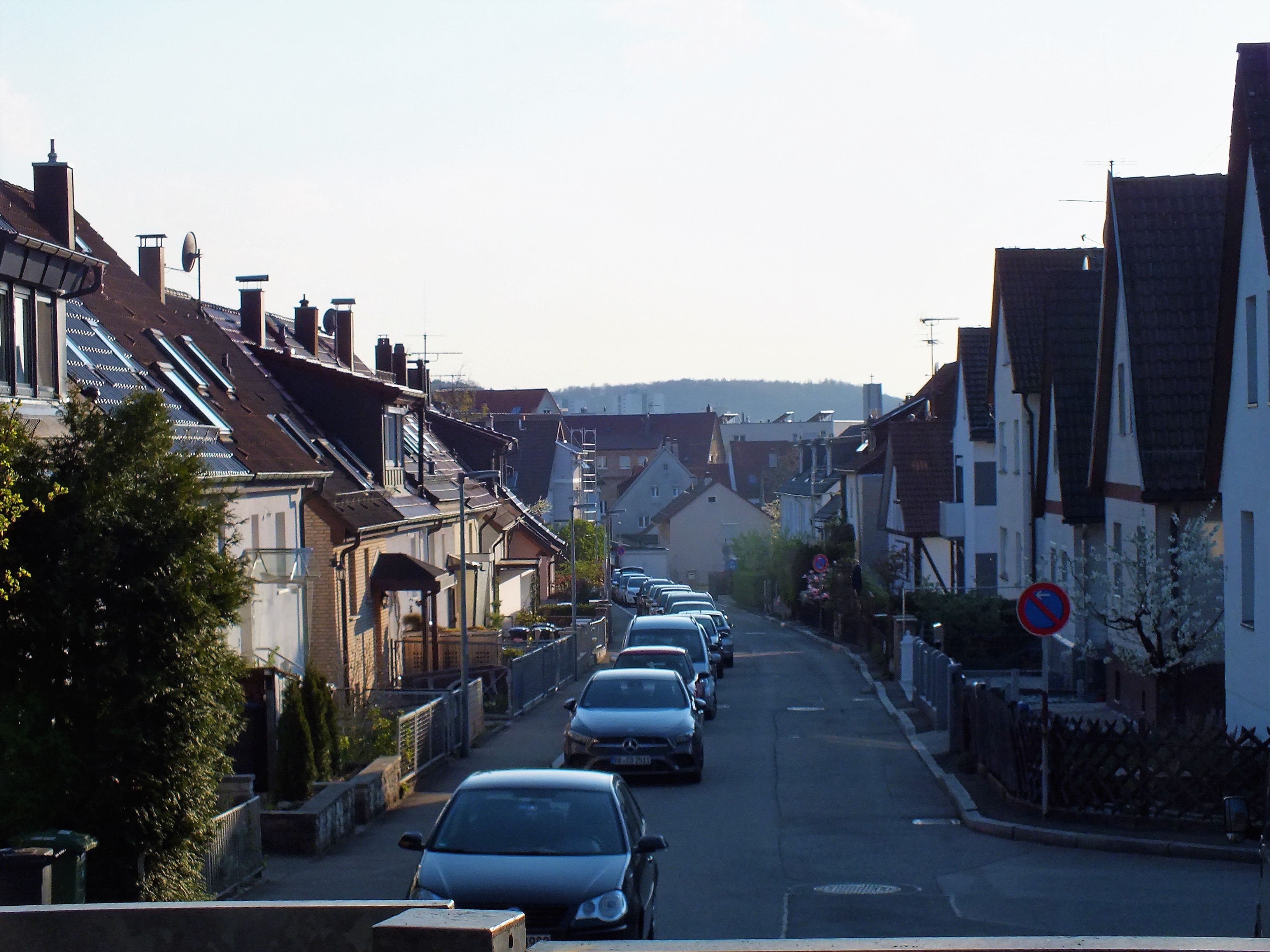 It’s not unattractive. It’s just … this. The yards were pleasantly landscaped with flowers and so forth. Also that sign on the right—the blue circle with the red border and stripe and the tiny white arrow? There were versions of that everywhere. And try as I might, I never could figure out what they were telling me. Sometimes there were two stripes, forming an “X.” Sometimes there were little white arrows pointing in both directions. No idea.

I made it back to the house without incident, and without having to speak to anyone or even display any degree of human kindness. My daughter had to meet me at the gate because I wasn’t allowed to enter the base unescorted, even though I was on the list.

We stayed awake until 9:00 or so and then slept very soundly, having been awake for almost 32 hours.

This entry was posted in Food, Me and My Family, Scenery. Bookmark the permalink.